Almost 11,000 Britons could be living with undiagnosed breast cancer because of the Covid pandemic, charity warns

Almost 11,000 people could be living with undiagnosed breast cancer because of the pandemic, a charity has warned.

Fewer referrals and treatment delays combined with the pause to screening programmes resulted in 10,700 fewer people being diagnosed with breast cancer between March and December 2020 than expected.

Breast Cancer Now analysed a range of data to reach the figure, including the number of people starting their first treatment for breast cancer, the number of women screened each month and the length of time for which services were paused.

Baroness Morgan, chief executive of the charity, warned it was likely to cost some women their lives. 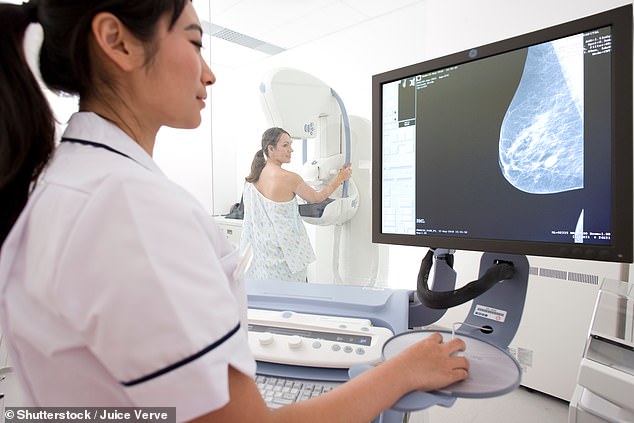 WOMAN, 51, WHO HAD NIGHTMARES THAT SHE WAS DYING IS DIAGNOSED WITH BREAST CANCER 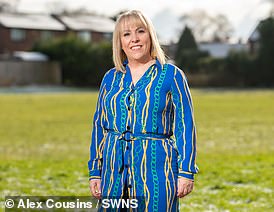 Carolann Bruce, 51, a mother of two from Stockport, Greater Manchester

A ‘healthy’ woman who decided to go to the doctors after having ‘terrifying nightmares’ she was dying was shocked discover she had advanced breast cancer.

Carolann Bruce, now 51, says her dreams saved her life after they pushed her to get checked twice even after doctors told her they were ’80 percent sure’ she didn’t have cancer.

The mother-of-two from Stockport, Greater Manchester, had been experiencing nightmares on a nightly basis starting in January 2011, which lasted for nearly a year and left her terrified to go to sleep.

‘These dreams were just the scariest dreams you can ever imagine, I had a dark shadow man who would visit me on a daily basis.

‘I’d think I was awake and he would take over my body. It was absolutely terrifying. I used to tell my mum I wanted to stay up all night because I was so scared,’ she said.

She said: ‘The tragic cost of almost 11,000 missing breast cancer diagnoses is that in the worst cases, women could die from the disease.

‘And looking ahead, while we cannot know the full impacts of the pandemic, what we do know now is that over the coming years the number of women coming forward could overwhelm our already over-stretched workforce.

‘Women with breast cancer have already paid an unacceptable price due to the pandemic – we simply cannot afford for any more time to pass before UK governments invest in and tackle the crisis facing the cancer workforce.

‘Only then will we be giving women the best chance of an early breast cancer diagnosis which we know is critical to their chances of survival.’

Even though services have resumed, the charity said they are only operating at around 60 per cent capacity due to the need for social distancing and infection control.

It warned of a forthcoming ‘perfect storm’, with health workers in imaging and diagnostic services under unprecedented pressure due to the pandemic, suggesting they were already ‘chronically under-resourced’.

Breast screening services were paused for different amounts of time across the UK, including around four months in Scotland and five months in Wales in the last year.

While services were not officially paused in England, Breast Cancer Now said it still happened as hospitals turned their attention to fighting Covid.

Meanwhile, there was a 90,000 drop in referrals to a specialist for patients with possible symptoms of breast cancer in England between March and December.

The charity put the number of patients undiagnosed with breast cancer due to the pandemic at about 8,900 cases in England, 890 in Scotland, 687 in Wales and 248 in Northern Ireland.

Jane Murphy, clinical nurse specialist at Breast Cancer Now, said some women had been reluctant to visit their GP or hospitals for fear of catching Covid-19, or did not want to burden the NHS.

DAME JOAN BAKEWELL: Go for testing now, don’t delay like my sister did

Decades ago my sister, Susan, died of breast cancer. She was not diagnosed early enough, so she died young. I have been a Vice Patron of the charity Breast Cancer Now ever since and seen how different things are now. Routine screening means women can be diagnosed with breast cancer at an early stage and need not face a death sentence. Over the years I have seen many friends who have had early breast cancer, diagnosed, treated and recovered.

That’s how it was until Covid 19 struck. Now, once again, thousands are going undiagnosed because of disruption to routine screening services and a 90,000 drop in referrals for those with possible breast cancer symptoms. As many as 11,000 could be living with breast cancer and not knowing it. Between March and December 2020 an estimated 10,700 fewer women were diagnosed than in any normal year.

It’s easy to see why: Covid has thrown normal medical routines into disarray. The breast cancer imaging and diagnostic workforce is under unprecedented pressure. What’s more women say they are reluctant to attend appointments. They give two reasons: they fear risk of infection at local hospitals, and, generously, not wanting to be a burden on the NHS. It’s even been reported some GPs have been reluctant to refer their patients. All this is understandable:

But it is now building up a crisis as the pandemic eases. Yes, screening teams are beginning to get back up to speed. But the huge backlog of cases will put them under even greater pressure. That’s why there needs to be speedy and targeted intervention now – with immediately renewed resources and staffing. Such steps will once again give women the best chance of treatment and recovery. And women should go for testing now, and not delay, as my sister did all those years ago.

‘The pandemic has thrown us all into unprecedented times and it’s natural people will have concerns,’ she said.

‘But the sooner breast cancer is diagnosed the better the chances of treatment being successful, which makes it vital that women continue to check their breasts regularly and get any new or unusual changes checked with the GP, and continue to attend breast screening appointments when invited.

‘The NHS wants people to attend their appointments and report symptoms to their GP – they have measures in place to keep staff and patients safe.’

Dr Jeanette Dickson, president of the Royal College of Radiologists, said it was vital for anyone who missed screening or avoided seeing their GP with possible symptoms, to come forward.

‘Screening teams are getting back up to speed, but breast imaging services were in a precarious position going into the coronavirus pandemic and those resourcing challenges are still there.

‘Many breast units have vacancies and there is a looming shortage of breast radiologists due to retirements.

‘The backlog of cases waiting will put even more pressure on stretched diagnostic teams and the cancer teams then responsible for tailoring and delivering treatment.

‘The diagnostic and treatment workforce caring for breast cancer patients desperately needs more investment to ensure our future patients get the speedy care they deserve.’ Experts fear as many as 100,000 people could be living with undiagnosed cancer as we emerge from the pandemic.

Last year saw the lowest number of people starting cancer treatment in England for ten years, with cancer surgery alone down by 21,700 in the first wave.

Last month, a group of 75 cross-party MPs wrote to Boris Johnson demanding the cancer backlog is ‘tackled with the same political will as the vaccination roll out’.

An NHS spokeswoman said: ‘While the vast majority of cancers detected through screening programmes are at a very early stage and so the clinical impact on patients is extremely low, thousands of invitations are being sent every month and people should book in for screening as soon as they are invited.

‘If you feel a lump or any cancer symptom, please come forward and get checked.’

It comes after a MailOnline analysis revealed every hospital trust in England failed to reach the NHS target of starting treatment for all cancer patients within two months of their diagnosis.

Cancer patients are meant to be seen for potentially life-saving treatment within 62 days of being diagnosed.

The worst performing hospitals out of 124 where data was provided tended to be in large cities, where more beds were occupied by patients suffering debilitating symptoms triggered by the virus.

North Middlesex Hospital NHS Trust, in London, was worst hit after only managing to start treating 34.7 per cent of cancer patients within the 62-day target (38 patients were waiting for treatment). This was less than half the 70.5 per cent seen at the same time the year before.

University Hospitals Birmingham NHS Trust was the second worst-hit at 38.9 per cent, compared to 54.9 per cent in 2019.

And Norfolk and Norwich University Hospitals saw 51.4 per cent of cancer patients within two months, compared to 67.3 per cent the year before.