Solar farms in SPACE could provide a reliable source of renewable energy to the grid and offer an alternative option to nuclear power in future, European Space Agency claims

Solar farms in space could provide a reliable source of renewable energy to the grid and offer an alternative option to nuclear power in future, experts have claimed.

The European Space Agency (ESA) is looking at a plan that would take advantage of the fact the sun never stops shining in space, and sunlight is much more intense there than on Earth’s surface.

It would involve assembling a satellite several miles long in orbit with a solar array — which would be illuminated by the sun more than 99 per cent of the time.

The energy would be beamed back to Earth via high frequency radio waves and power would be produced day and night regardless of what the weather was like on the surface of our planet.

Supporters of the idea say that a single plant may be able to deliver around two gigawatts of renewable power into the grid, which is about the same as a nuclear power station here on Earth

Technology: Solar farms in space could provide a reliable source of renewable energy to the grid and offer an alternative option to nuclear power in future, experts have claimed 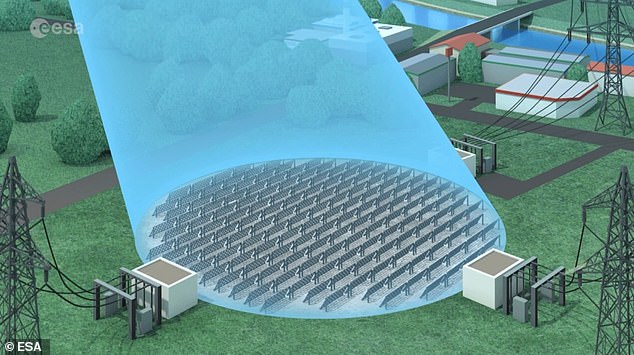 The sun is the star at the heart of the Solar System, a nearly perfect sphere of hot plasma, radiating energy.

Three quarters of the star is made of hydrogen, followed by helium, oxygen, carbon, neon and iron.

It is a G-type main sequence star and is sometimes called a yellow dwarf.

The Sun formed from the gravitational collapse of matter in a large molecular cloud that gathered in the centre.

The rest flattened into an orbiting disc that formed everything else.

Recent studies suggest the concept, called space-based solar power, is theoretically workable and could support the path to decarbonising the energy sector.

However, experts say significant uncertainties and technical challenges still remain, which is why a research and development programme known as SOLARIS as been proposed.

The physics involved means that these satellites would have to be large, around several kilometres in size, and the same being true for the collecting ‘rectennas’ down on Earth’s surface.

This in turn would require technical advancements in areas such as in-space manufacturing and robotic assembly, high-efficiency photovoltaics, high power electronics and radio frequency beam forming.

Further research to confirm the effects of low-power microwaves on human and animal health and compatibility with aircraft and satellites would also have to be carried out.

But the technology could offer ‘an alternative option to nuclear power’, according to Dr Sanjay Vijendran, who has been studying it for ESA.

‘These are the kind of technical questions that SOLARIS will look into, to explore further the feasibility of the concept, so that Europe could make an informed decision in 2025 on whether to proceed with a Space-Based Solar Power programme in the future,’ he added.

‘As an added plus, any breakthroughs achieved in these areas will be valuable in their own right, applicable to many other spaceflight endeavours.

‘The mistake that is often made is to compare the concept with ground-based solar power, when really space solar offers novel characteristics such as baseload power that actually serves to complement rather than compete with intermittent sources like ground solar and wind.

‘In this sense they could offer an alternative option to nuclear power in future — where studies show that the space-based solution ends up being surprisingly competitive.’

The programme proposal comes at a point when global interest in space-based solar power is at its highest for decades, with in-orbit demonstrations being prepared in the US, China and Japan.

The UK has established its Space Energy Initiative to develop space-based solar power, while the European Commission is funding a project investigating large lightweight reflectors redirecting sunlight onto solar farms on the ground called SOLSPACE.

‘Considering the climate and energy crises, and the rapid strides we’re making in space capabilities, now is the time to investigate if space-based solar power can be part of the solution — it’s the responsible thing to do,’ Dr Vijendran added.

A report by engineering consultancy Frazer-Nash has estimated that a first space-based solar power station could be online by the 2040s at a cost of about £16 billion.

After that, each additional satellite could cost around £5 billion, the report added.

It estimates that these would provide power at £50 per MWh, which is about the same as other renewable sources.

The 3.2GW Sizewell C nuclear plant in Suffolk, meanwhile, is expected to cost £20-30 billion and will be capable of generating electricity for six million homes for up to 60 years.

SOLAR POWER EXPLAINED: ENERGY IS CONVERTED FROM SUNLIGHT INTO ELECTRICITY