Sweden's highest mountain is SHRINKING due to climate change

Climate change even has the power to shrink mountains, a new study shows.

The glacial peak of Kebnekaise, Sweden’s highest mountain, now reaches highs of 6,872 feet – almost 6.5 feet lower than only a year prior, experts say.

Since 2000, the height of the glaciated southern peak has decreased ‘drastically’ due to rising air temperatures driven by climate change.

The study authors at Stockholm University have called the rapid shrinkage ‘a symbol of the fragility of nature’. 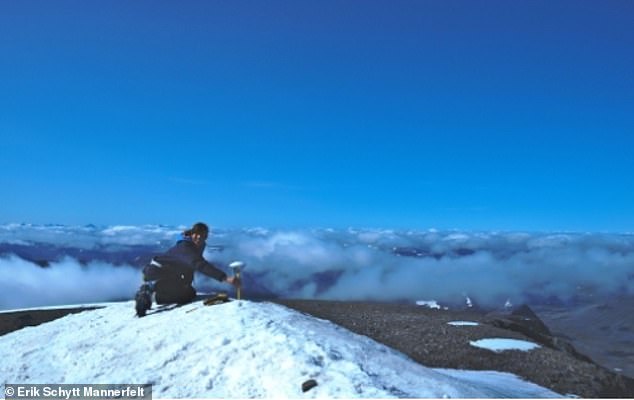 Tarfala station manager Annika Granebeck measures the height at the top of Kebnekaise on August 14, 2021

Per Holmlund, professor of glaciology at Stockholm University and the lead author of the new study, said the height variation is ‘a good symbol of the glaciers’ response to a warming climate in Sweden’.

The changes reflect a long-warming climate in Sweden, according to the university, which referred to the recent UN climate panel report dubbed a ‘a code red for humanity’.

The bombshell report said global warming had caused an unparalleled melting of glaciers and was close to spiralling out of control.

However, Professor Holmlund added that the ‘drift’ – the glacial material that makes up the southern peak – has increased in thickness in some places.

As well as climate change melting the glacier, the shrinkage can be attributed to changing wind conditions, which affect where snow accumulates in the winter.

Kebnekaise is located around 90 miles (150 km) north of the Arctic Circle in the Scandinavian Mountains range that stretches across large parts of northern Norway and Sweden, and is part of the Laponia World Heritage Site.

Kebnekaise has two main peaks – a glaciated southern peak (prone to shrinkage) and a northern ice-free peak, which is now the highest in Sweden.

As it’s made of rock, the height of the northern peak doesn’t fluctuate, but the southern peak (made of ice) does.

On August 14, the southern peak of Kebnekaise was measured at 6,872 feet (2,094.6 metres) above sea level by researchers from Tarfala research station.

This is the lowest it’s been since measurements started in the 1940s, and almost two metres lower than the corresponding time last year, the university claims. 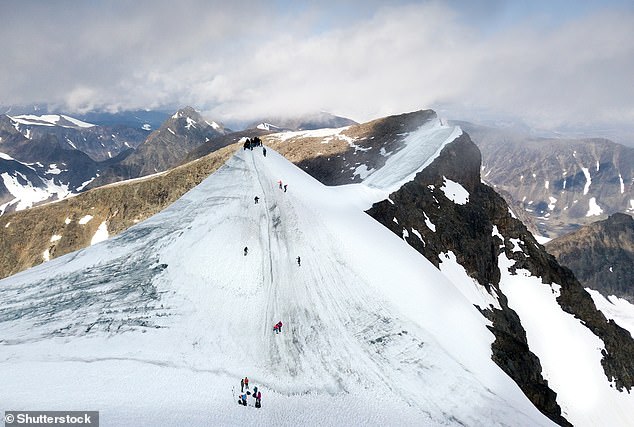 This photo captured by a drone photo shows people walking up to the southern peak of Kebnekaise, the highest mountain in Sweden. The northern peak is visible in the background (right)

‘The decrease in the peak and the changed appearance of the drift can mainly be explained by a rising air temperature but also changing wind conditions, which affect where the snow accumulates in the winter,’ it said.

Stockholm University’s Tarfala research station has been measuring the southern peak since the mid-1940s, which has varied ‘in both height and shape’ during the 20th century.

Generally, its height varies 6.5 to 9.8 feet (two to three meters) between summer and winter. Normally the peak is at its highest in May and lowest in September.

Until 2019, the southern peak was the highest mountain peak in Sweden for a whopping 139 years.

In September that year, the southern peak was demoted to second in the rankings of Swedish mountains after a third of its glacier melted, putting it behind the northern peak.

‘The highest point of the northern peak consists of mountains and is thus stable,’ Stockholm University said.

‘This development means that the northern peak, in the long run, will become Sweden’s highest point all year round.’

– It is ‘unequivocal’ that human activity has warmed the atmosphere, ocean and land – with widespread and rapid changes across the world.

– Many of the changes are unprecedented over many centuries to many thousands of years, with the world warming at a rate unprecedented in at least 2,000 years.

– Global average temperatures were nearly 2F (1.1C) higher in the last decade than in pre-industrial times, or the period 1850-1900, driven by emissions caused by human activities such as burning fossil fuels and deforestation.

– Human-caused climate change is already affecting many weather and climate extremes in every region around the world, with stronger evidence of more frequent or intense heatwaves, heavy rain, droughts and tropical cyclones and the role humans play in driving the changes.

– Humans are very likely the main driver of the global retreat of glaciers, decline in sea ice, warming oceans and rising sea levels. The rate of sea level rise is speeding up.

– Global surface temperatures will continue to increase until at least mid-century, and the world will reach or exceed 1.5C of warming over the next 20 years.

– Global warming of 2.7F and 3.6 F (1.5C and 2C) – limits countries have committed to in order to avoid the most dangerous impacts of climate change – will be exceeded in the 21st century unless deep reductions in carbon dioxide and other greenhouse gas emissions occur in the coming decades.

– Continued warming will drive increases in the frequency and intensity of hot extremes, marine heatwaves, heavy rain, droughts in some regions, the proportion of intense tropical cyclones, and reductions in Arctic sea ice, snow cover and permafrost.

– Every additional increment of warming causes larger changes in extremes, with every extra 0.5C temperature rises leading to clear increases in the intensity of heatwaves, heavy rain that can cause flooding, and droughts.

– Under scenarios for the future with increasing carbon dioxide emissions, the ocean and land carbon sinks such as forests are projected to be less effective at slowing the accumulation of the greenhouse gas in the atmosphere.

– Changes to oceans, sea levels and melting permafrost and glaciers are irreversible for decades, centuries or even millennia as a result of past and future warming.

– Strong, rapid and sustained reductions in emissions of methane would help curb warming, and would also improve air quality