A fourfold rise in mystery COVID-19 cases in the past week and hundreds of infected children are dimming any prospect of restrictions being eased on schedule early next month as Premier Daniel Andrews rules out a NSW-style plan to vaccinate the state’s way out of lockdown.

In the past seven days, almost 70 Victorians have been infected without knowing how they picked up the virus, up from 17 the previous week. Some of these cases were linked after further investigation, but epidemiologists believe the quantity of cases not immediately able to be connected is a sign of an uncontrolled outbreak.

An Andrews government source, speaking anonymously so as to make predictions, said it was highly probable the lockdown would extend beyond September 2 because the number of mystery cases and of cases not in isolation were both rising.

Authorities are also increasingly concerned about the number of young children being infected. More than a fifth of Victoria’s 494 active cases are aged under 10 and 100 more are between 10 and 19.

“And then we go to the house and we realise a number of people in the household are positive … It’s a very, very young age profile,” Mr Weimar said.

Despite the outbreak becoming more unwieldy by the day, Mr Andrews on Monday affirmed his commitment to driving down the number of cases who were infectious in the community to as close to zero as possible. He also poured cold water on the prospect of Victoria – like NSW – shifting its focus away from zero cases and towards vaccination as the path out of lockdown.

Mr Andrews said he did not favour an option put forward by University of Melbourne epidemiologist Tony Blakely to move to a lighter lockdown with slightly more freedoms in acknowledgement of the difficulty of reaching zero.

Professor Blakely’s modelling on the proposal, which he said would ease the mental health strain on Victorians, estimates cases would rise to about 400 a day, but vaccine coverage would curtail the spike by mid-October.

The Premier argued it was unclear whether there was enough supply of vaccines to inoculate the population quickly enough for the strategy to work. “The notion of Delta bubbling [at a controlled level] is really hard unless you’ve got really tough rules on. So, you start to open up and it won’t be bubbling, it will be raging,” he said.

“The notion that we could vaccinate people as fast as the Delta virus infects people – that is not what the Doherty modelling shows, it is not the national cabinet position.”

Mr Andrews, a vocal proponent of the national cabinet reopening plan, said it was extremely unlikely lockdowns would be required when the 80 per cent vaccine target was reached, and health orders would probably only be used in specific localities.

NSW recorded 818 cases – the second day of the new case tally topping 800 – and three deaths. About 700 cases had an unknown source and Premier Gladys Berejiklian announced her target of six million jabs by the end of the month would be beaten by a week.

Masks are now mandatory outdoors across NSW and people who live in 12 local government areas across Sydney’s south and west have been placed under a 9pm-to-5am curfew and are only allowed to leave the home for one hour of exercise a day.

Transmission of the more infectious Delta variant among children is a significant concern for health authorities, with hospitalisations higher than for other variants globally. However, doctors say there is no robust evidence it is causing a greater severity of disease, or higher rates of intensive care or deaths in children. Data from Canada released two weeks ago suggests a 2.75 times increased risk of children aged under nine being admitted to hospital with Delta. 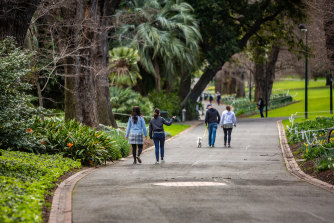 People enjoying a walk in the Fitzroy Gardens on MondayCredit:Scott McNaughton

He said while COVID was a respiratory disease, gastrointestinal symptoms were very common in children with COVID-19, manifesting in nausea, diarrhoea and vomiting.

“It’s a virus that can affect the whole body, so the occasional child will get sick and develop symptoms whether they be respiratory or gastrointestinal,” the University of Sydney academic said.

However, Professor Booy said most children would signal their illness in the morning and be kept home from school or their parents would notice their illness.

“Very few cases of coronavirus in children end up in hospital and very few need intensive care. Of the almost thousand COVID deaths in Australia, none have been children,” he said.

“Parents are understandably anxious and we really need to be reassuring them about exactly how COVID behaves in children.”

Authorities are also urging Victorians to stop cancelling or skipping to their vaccine appointments. About 10,000 of these incidents are occurring each day, with the cause believed to be Prime Minister Scott Morrison’s announcement last week that Pfizer would be available for people between 16 and 39 by the end of the month.

Of Monday’s 71 cases in Victoria, 14 were linked to the Shepparton outbreak, 10 were joined to the Newport cluster, eight were associated with the MyCentre childcare centre in Broadmeadows and five were linked to the Royal Melbourne Hospital, where hundreds of staff have been sidelined because they were exposed to the virus.

Twenty-four staff members at St Vincent’s Hospital in Melbourne are now isolating after potentially being exposed to a patient with COVID-19 last week.

Mr Weimar said the virus had spread into suburbs including Essendon West, Camberwell, Thornbury, Fitzroy North, Maidstone and Sorrento, on the Mornington Peninsula. He urged younger men in the western suburbs of Newport, Altona and Altona North linked to local gyms and sporting clubs to get tested.

He was keen to give hope to Victorians that following the rules could lead to stay-at-home orders being lifted as planned on September 2, saying: “We have pulled down six, seven outbreaks now in the last eight months, so collectively as a Victorian community we can absolutely do that. We can cap rising cases and get it down.”

But La Trobe University epidemiologist Hasan Vally said contact tracers were not ahead of the outbreak and authorities would probably not regain control by September 2. He said growing vaccine coverage would soon start to reduce the level of transmission, but this would still be weeks away.

Professor Adrian Esterman, an epidemiologist from the University of South Australia, said it was too soon to tell if the state government had a handle on the latest outbreak “We really won’t know for at least another two or three days which way it is going to go,” he said.

“It is borderline at the moment.”

Pet owners take more than three months to get to grips with their new puppy or kitten, research reveals