Follow
Home » Science » The moon has a tail that sends beams across Earth, researchers say

NASA plans to follow up exploration of Mars with moon mission

The moon has a “comet-like” tail made of millions of sodium atoms, researchers reported this week.

While the lunar surface is hit by solar wind, UV photons and meteorids, atoms liberated by the impact are pushed by light pressure into “a long comet‐like tail” opposite the sun, according to a study published Wednesday in the Journal of Geophysical Research: Planets.

“Near [a] New Moon, these atoms encounter the Earth’s gravity and are ‘focused’ into a beam of enhanced density,” the Boston University astrophysicists wrote in their abstract.

When the New Moon shifts between the Earth and the sun, the downflowing structure’s “beam” shoots around the Blue Marble’s atmosphere as well as out into space.

Although the tail is invisible to the naked eye — sunlight reflected from the moon’s surface is perhaps a million times brighter — it can be viewed using sensitive cameras equipped with filters tuned to the orange light emitted by the sodium atoms.

While ground-based spectrographs detected sodium atoms in the moon’s thin atmosphere in 1998, data gathered from the El Leoncito Observatory’s All-Sky-Imager revealed details about changes to the shape and brightness.

“This network turned out to be ideal for studying the ‘Sodium Moon Spot’ (SMS), or the lunar sodium tail that can be seen near New Moon, however, because they are constantly operating,” he said.

“Thus, while this study focuses on understanding the long-term variation of the SMS from one site, it is also possible to see the lunar tail from multiple observatories simultaneously.”

After long-term study, researchers found a correlation between the brightness of the SMS spot and the rate at which meteors hit the planet, controlling the spot’s brightness and flicker. 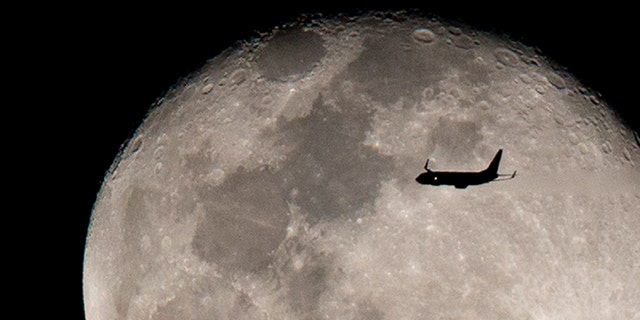 An airplane flies against the backdrop of the rising moon after taking off from Miami International airport, Sunday, Feb. 12, 2017, above Surfside, Fla. (AP Photo/Wilfredo Lee)
(AP)

While annual meteor showers can coincide with a brighter beam, impacts by sporadic meteors are more closely related to its brightness — potentially due to the amount of energy they produce.