Why a long day in the office can be just as exhuasting as the gym: THINKING too hard causes a build-up of toxic chemicals in your brain, study reveals

Do you ever find yourself physically worn out after a long day at work, even if you’ve just been sat at a computer?

Scientists have found out that there is a reason for this, as a toxic chemical begins to build up in the brain after it has been active for extended periods of time.

The brain therefore shifts towards actions that do not require as much effort to avoid circulating this chemical, glutamate, any more.

This manifests as a lack of desire to do work, or cognitive fatigue, claim the neuroscientists from Pitié-Salpêtrière University in Paris, France.

Dr Mathias Pessiglione, who led the study, said: ‘Influential theories suggested that fatigue is a sort of illusion cooked up by the brain to make us stop whatever we are doing and turn to a more gratifying activity,

‘But our findings show that cognitive work results in a true functional alteration—accumulation of noxious substances—so fatigue would indeed be a signal that makes us stop working but for a different purpose: to preserve the integrity of brain functioning.’ 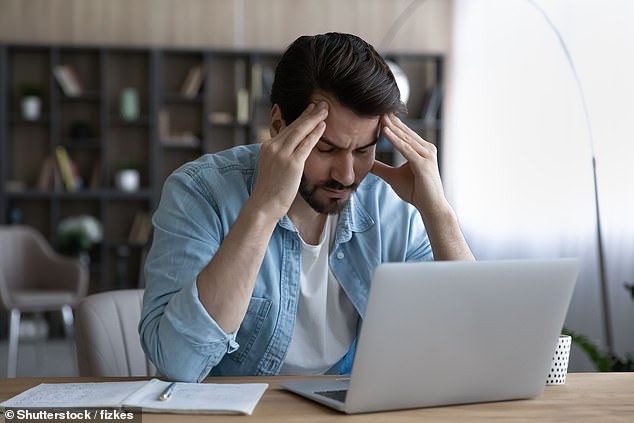 Glutamate is a neurotransmitter – a chemical that nerve cells use to send signals to other cells, like in the brain.

It is used to activate every major excitatory function in the vertebrate brain.

For your brain to function properly, glutamate needs to be present in the right concentration in the right places at the right time.

Too much glutamate is associated with such diseases as Parkinson’s disease, Alzheimer’s disease and Huntington’s disease

Physical tiredness is a direct result of strenuous manual labour, but thinking hard for a long time instead causes mental exhaustion, which causes symptoms like lack of motivation and ability to focus.

In the study, published today in Current Biology, the researchers set out to understand what mental fatigue really is and why it presents itself.

To do this, they used magnetic resonance spectroscopy (MRS) to monitor brain chemistry over the course of a workday for two groups of study participants.

They split the group into easy and hard computer-based memory tasks that involved remembering and matching a series of differently coloured letters for nearly six-and-a-half hours.

The results showed that people with the harder tasks tended to choose options that offered smaller rewards in exchange for lower effort or that arrived more quickly.

Next, the scientists studied their levels of glutamate in synapses of the brain’s prefrontal cortex, and found it was higher for the group with the more mentally-taxing task.

The authors say that this supports their hypothesis that the accumulation of glutamate causes the brain to shift to lower effort actions.

This is its way of avoiding cycling or further accumulation of this potentially toxic chemical, which could impair brain function.

The researchers hope this finding may provide a new method of detecting severe mental fatigue, and inform work agendas to help avoid burnout.

In future studies, they hope to increase the understanding of why the prefrontal cortex is so susceptible to glutamate accumulation and fatigue after neural activity.

They’re also curious to learn whether the same markers of fatigue in the brain may predict recovery from health conditions, such as depression or cancer.

While there is no way around this limitation to our thinking, Dr Pessiglione recommends avoiding making important decisions when tired and getting plenty of rest when the fatigue sets in.

Listening to ‘groovy’ music like ABBA or the Bee Gees can boost brain performance, study reveals

Scientists have discovered that listening to ‘groovy’ music, from artists like the Bee Gees or ABBA, can actually boost brain performance.

The results of a study by the University of Tsukuba in Japan found that songs with a groove rhythm enhanced the ‘executive function’ of the listener.

Executive function is a set of mental skills that enable us to plan, focus attention, remember and multitask.

However, these results were only seen on participants who were familiar with groove music, or had good rhythm.