Amazing moment an ‘unstable sunspot’ fires off solar eruptions during stormy five-hour explosion of activity (but don’t worry, it’s pointing away from Earth!)

NASA’s Solar Dynamics Observatory (SDO) captured the series of eruptions from the sunspot over the course of five hours on Tuesday, October 26.

Sunspots are areas that appear dark on the Sun’s surface, because they are cooler than other parts areas (although they’re still very hot, around 6,500°F).

Amazingly, these sunspots can become many times bigger than the whole of the Earth.

This recent series of eruptions occurred on the ‘limb’ of the Sun – its edge as seen from Earth – meaning it was pointed away from us.

But scientists should get a better glimpse of the region when it rotates into the view of our Earth in the next few days (the Sun rotates on its axis once in about 27 days).

SDO is a NASA satellite that has been observing the Sun since 2010, when it launched from Cape Canaveral Space Force Station in Florida.

‘At least half a dozen explosions occurred during [SDO’s] brief movie,’ reported space tracking site SpaceWeather, as quoted by Space.com.

‘The blast site is hidden just behind the edge of the Sun. It’s almost certainly an unstable sunspot.’

Interestingly, sunspots are only dark in contrast to the bright face of the Sun.

If you could cut an average sunspot out of the Sun and place it elsewhere in the night sky, it would be about as bright as a full moon.

Sunspots form at areas where magnetic fields are particularly strong – so strong that they keep some of the heat within the Sun from reaching the surface.

Powerful magnetic fields in the vicinity of sunspots produce active regions on the Sun, which in turn frequently spawn disturbances such as solar flares and coronal mass ejections (CMEs).

These events can present a danger to astronauts and damage satellites, causing havoc for communications systems on Earth. 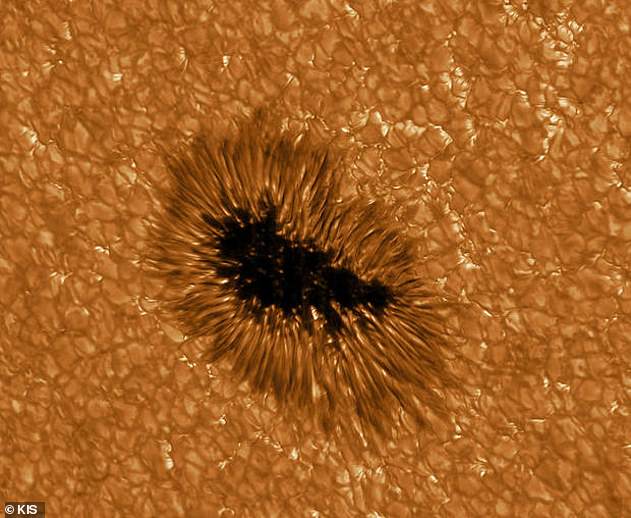 Sunspots are a common sight on our Sun during the years around solar maximum – when our star is at its most active.

The solar maximum marks the middle of the Sun’s solar cycle, which lasts for about 11 years (although it can be as short as eight years and as long as 14 years).

Solar minimums, meanwhile, mark a period of reduced activity on the Sun, when sunspots and solar flares are less frequent.

When the sun entered a solar minimum between 1650 and 1710, NASA said the Earth was plunged into a ‘deep freeze’.

We’re still fairly near the beginning of the current solar cycle, called solar cycle 25, which started in December 2019.

WHAT IS THE SOLAR CYCLE?

The Sun is a huge ball of electrically-charged hot gas that moves, generating a powerful magnetic field.

This magnetic field goes through a cycle, called the solar cycle.

Every 11 years or so, the Sun’s magnetic field completely flips, meaning the sun’s north and south poles switch places.

The solar cycle affects activity on the surface of the Sun, such as sunspots which are caused by the Sun’s magnetic fields. 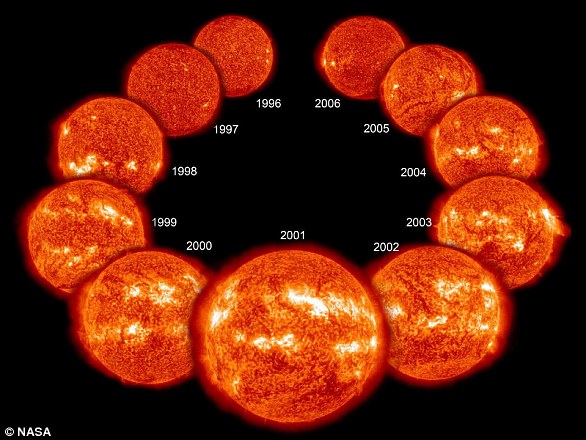 Every 11 years the Sun’s magnetic field flips, meaning the Sun’s north and south poles switch places. The solar cycle affects activity on the surface of the Sun, increasing the number of sunspots during stronger (2001) phases than weaker (1996/2006) ones

One way to track the solar cycle is by counting the number of sunspots.

The beginning of a solar cycle is a solar minimum, or when the Sun has the least sunspots. Over time, solar activity – and the number of sunspots – increases.

The middle of the solar cycle is the solar maximum, or when the Sun has the most sunspots.

As the cycle ends, it fades back to the solar minimum and then a new cycle begins.

Giant eruptions on the Sun, such as solar flares and coronal mass ejections, also increase during the solar cycle.

These eruptions send powerful bursts of energy and material into space that can have effects on Earth.

For example, eruptions can cause lights in the sky, called aurora, or impact radio communications and electricity grids on Earth.