'Weird' turtle-like dicynodonts 'were the first animals to have tusks'

Meet the first animal with tusks: ‘Weird’ turtle-like dicynodonts that lived before the dinosaurs up to 270 million years ago had earliest-known protruding teeth, scientists discover

Elephants are the first animals that come to mind when people think about creatures with tusks.

But now scientists have identified the ancient mammal that had the original protruding teeth — and it turns out to be a ‘weird’ turtle-like creature that lived before the dinosaurs.

Dicynodonts existed between 201 and 270 million years ago and ranged in size from tiny rat-like species to some that were as big as modern-day elephants.

They were first discovered 176 years ago and found to have had protruding teeth in their upper jaws, but scientists weren’t sure whether they were officially the earliest-known example of a mammal with tusks.

It has now been confirmed that they were thanks to a study led by Harvard University that traced the first tusks all the way back to dicynodonts and shed light on the evolution of protruding teeth by first defining what makes a tusk a tusk. 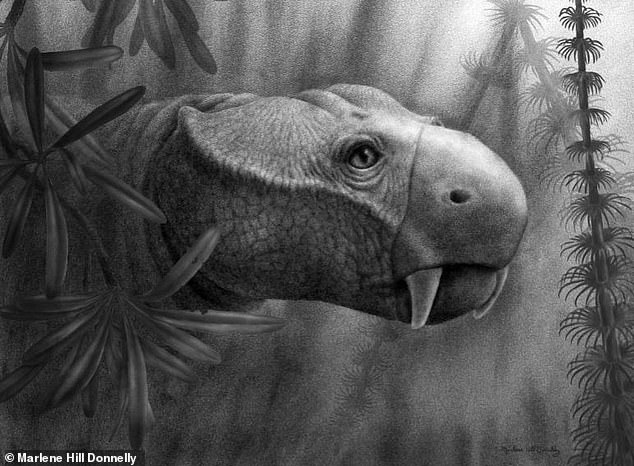 ‘Weird’ turtle-like dicynodonts (pictured in an artist’s impression) that lived before the dinosaurs up to 270 million years ago had the earliest known tusks, scientists discover 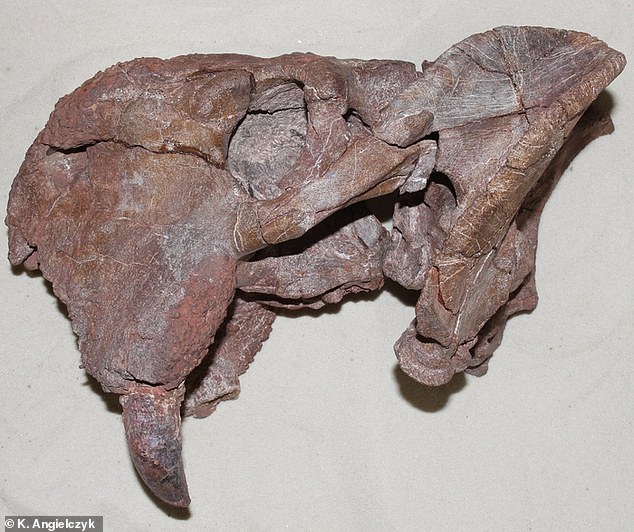 WHAT WERE THE DICYNODONTS?

Dicynodonts were large, mammal-like reptiles that were common in the Triassic period when the first dinosaurs began to emerge.

They existed between 201 and 270 million years ago and ranged in size from tiny rat-like species to some that were as big as modern-day elephants.

Dicynodonts were first discovered 176 years ago and found to have had protruding teeth in their upper jaws, but scientists weren’t sure whether they were officially the earliest-known example of a mammal with tusks.

It has now been confirmed that they were thanks to a study led by Harvard University that traced the first tusks all the way back to dicynodonts.

Although elephants are the main modern-day animals associated with tusks, many others also have them, including warthogs, hippopotamuses, Arctic-dwelling walruses, and even a guinea pig looking animal called hyraxes.

However, they are only found on mammals — there are no known fish, reptiles or birds with tusks.

Although dicynodonts are not mammals they are distant relatives and are more closely related to them than dinosaurs and other reptiles.

The Harvard study set out to solve the mystery of what evolutionary steps led to the development of this dental phenomenon and why mammals are the only animals today with tusks.

‘Tusks are this very famous anatomy, but until I started working on this study, I never really thought about how tusks are restricted to mammals,’ said lead author Megan Whitney, a postdoctoral fellow at Harvard University.

Co-author Kenneth Angielczyk, a curator at Chicago’s Field Museum, said: ‘We were able to show that the first tusks belonged to animals that came before modern mammals, called dicynodonts.

Dicynodonts are known for having a very peculiar arrangement of teeth. Most had two upper tusks that came down from the canine position, but they rarely had additional teeth. 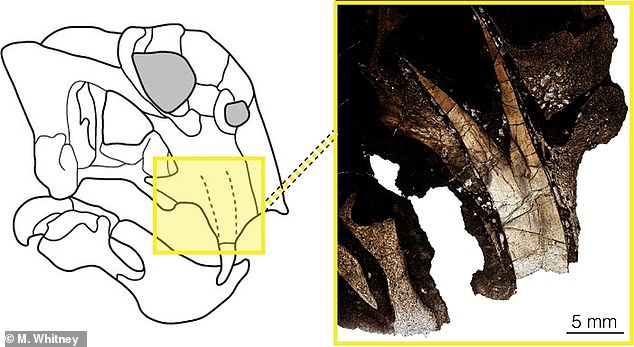 An example of an ever-growing, true tusk in the dicynodont Lystrosaurus. When researchers cut into the face of Lystrosaurus, the root of the tusks is composed of a wide open pulp cavity that suggests dentine was continuously being deposited

Instead, dicynodonts had a beak at the front of their mouths that was made of keratin and resembled a turtle’s beak.

The researchers were taking a lunch break during a paleontological dig when they got the idea for the study.

‘We were sitting in the field in Zambia, and there were dicynodont teeth everywhere,’ said Whitney.

‘I remember Ken picking them up and asking how come they were called tusks, because they had features that tusks don’t have.’

Not all protruding teeth are technically tusks.

‘For this paper, we had to define a tusk, because it’s a surprisingly ambiguous term,’ said Whitney.

The researchers determined that for a tooth to be a tusk it must extend out from the mouth, be made entirely of dentine — therefore lacking the enamel found on most mammals’ teeth — and be ever-growing.

The researchers used micro-CT to examine how the teeth attached to the skull and if there was any evidence of continuous growth.

Some of the dicynodont tusks that the team observed in Zambia didn’t seem to fit the definition of a tusk — they were coated in enamel instead of dentine. 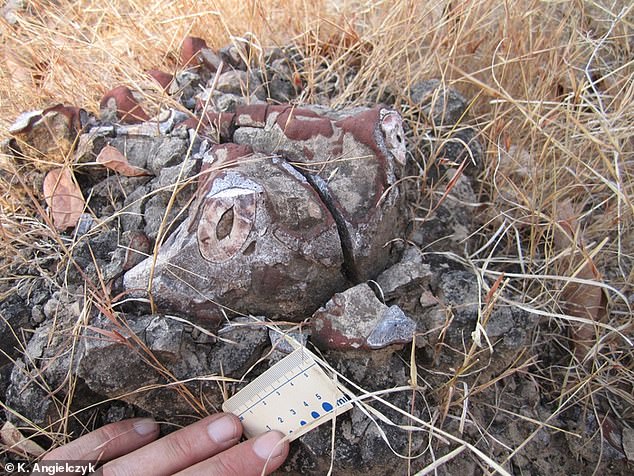 ‘There are many different kinds of dicynodonts and they appear to mostly all have tusks,’ said Whitney, ‘however, when you look at the micro structural details they’re very different in those groups.’

Enamel teeth are tougher than dentine but because of the geometry of how teeth grow in the jaw, if you want teeth that keep growing throughout your life, you can’t have a complete enamel covering.

Animals like humans evolved durable but hard-to-fix teeth — there is no replacement for the loss of an adult tooth.

Tusks are less durable than enamel-coated teeth, but they grow continuously, even if they get damaged.

The researchers found that, much like human teeth, these animals appeared to reduce the amount of replacement teeth at the canine position and had a soft tissue attachment to the jaw.

Interestingly, this is a combination of features that is unique to mammals.

Mammals, like humans, replace baby teeth with adult teeth only once unlike most other vertebrates — for instance sharks have continuous teeth production.

The enlarged caniniforms of Diictodon have enamel making them more like teeth than tusks. The cross section reveals a ring of enamel around the outside of the tusk that is illuminated under polarised light 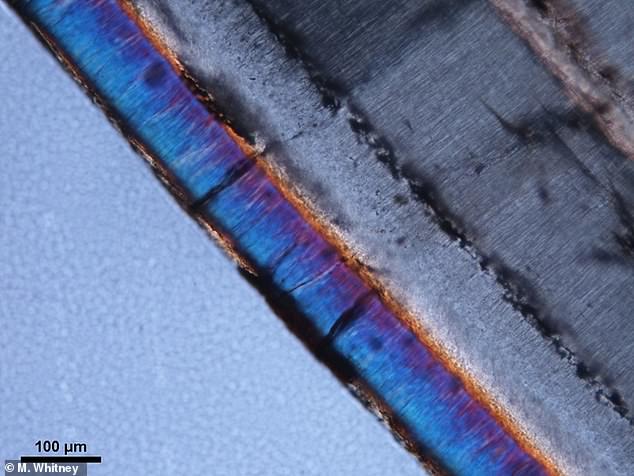 A cross-section through a dicynodont canine under cross-polarised light. The dentine core of the tooth is in grey and the capping enamel is shown in blue/purple. This enamel covering suggests that this caniniform tooth is more like a regular tooth than a true ever-growing tusk

‘If you have these two things, a reduced amount of tooth replacement and a soft-tissue attachment, an ever-growing tooth allows the animal to get around the fact that it cannot replace the tooth,’ said Whitney.

‘Instead it evolves to continuously deposit the same tooth tissues. And as the animal continues to deposit the tissue, the tooth begins to move outside of the mouth to become functional.’

The researchers found that true tusk evolution only occurred at a later stage of evolution in dicynodonts — early members of this group had a big tooth rather than a true tusk.

Late in their evolutionary history dicynodonts evolved a true tusk that was ever growing, and surprisingly did so convergently in multiple different kinds of dicynodonts.

‘I kind of expected there to be one point in the family tree where all the dicynodonts started having tusks, so I thought it was pretty shocking that we actually see tusks evolve convergently,’ said Whitney.

‘This is a similar story to what we see in elephant evolution in that it mirrors a lot of the patterns that have been studied on how elephants got their tusks.’

She added: ‘Dicynodonts were the most abundant and diverse vertebrates on land just before dinosaur times, and they’re famous for their “tusks”.’

Co-author Brandon Peecook, curator at the Idaho Museum of Natural History, said: ‘The fact that in reality only a few have true tusks, and the rest have big teeth, is a beautiful example of evolution we can document. We can see how to build a tusk!’

The researchers say the study, which shows the earliest known instance of true tusks, could help scientists better understand how evolution works.

The various kinds of teeth animals have evolved can tell scientists about the pressures those animals faced that could have produced those teeth.

For instance tusks can function in a variety of ways including defense, competition, burrowing, sexual selection, and even assist with locomotion — as in the walrus which uses its tusks to hoist itself upon to the ice from the water.

A continuously growing tusk may have allowed these dicynodonts to overcome the challenges of only having one set of replacement teeth throughout their lives.

‘We don’t really know what functions the dicynodonts tusks may have had because we can’t observe them and see what they were doing with them,’ said Whitney.

‘That’s a lingering question about dicynodonts, even more so now.’

The research has been published in the journal Proceedings of the Royal Society B.