Follow
Home » Science » Wild beaver numbers in Scotland have more than DOUBLED to 1,000

Wild beaver numbers in Scotland have more than DOUBLED to 1,000

Wild beaver numbers in Scotland have more than DOUBLED to 1,000 since 2017, following the illegal release of a handful of animals from private collections in Perthshire 20 years ago

Scotland now has more than 1,000 wild beavers, according to a new report, which found their numbers and the number of territories have doubled since 2017.

Beavers living in Scotland today are descended from a handful of animals released from private collections in Perthshire, in an illegal rewilding project 20 years ago.

NatureScot carried out an extensive survey of beaver populations and territories in 2020, finding the population was about 1,000 living in 251 different territories.

The range of where these territories are has grown too, from Glen Isla to Dundee and Stirling, Forfar to Crianlarich – and is likely to expand into Loch Lomond in the future.

The report also revealed that 87 beavers were culled over the past three years by trained specialists working to reduce the impact on agriculture. 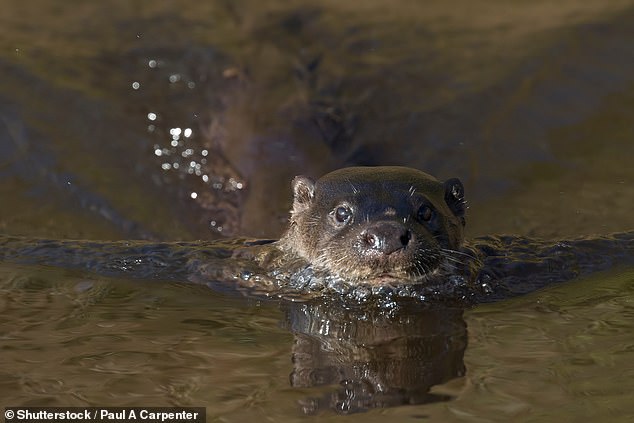 Scotland now has more than 1,000 wild beavers, according to a new report, which found their numbers and the number of territories have doubled since 2017 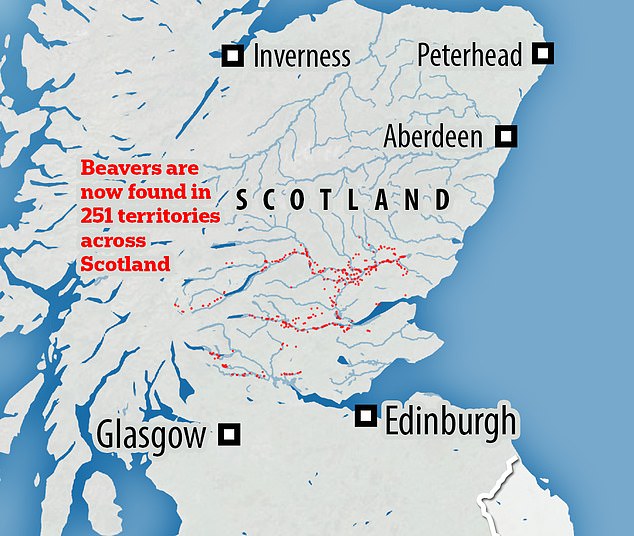 The range of where these territories are has grown too, from Glen Isla to Dundee and Stirling, Forfar to Crianlarich – and likely to expand into Loch Lomond in the future

BEAVERS IN SCOTLAND: STARTED WITH AN ILLEGAL REWILDING PROJECT

Beavers went extinct in the UK in the 16th Century due to over hunting.

For 400 years they were absent from the islands, but an illegal rewilding project in the early 21st Century saw them return for the first time.

It started with a handful of individuals being released from a private collection in Perthshire, Scotland.

A later project in 2009 by the Scottish Wildlife Trust saw further individuals released across the Highlands.

By 2020 there were 1,000 individuals in Scotland with a handful transported to England and Wales.

The Scottish population were living in 251 territories across the country.

Beavers play a vital role in creating and restoring wetlands where other species can thrive, reducing downstream flooding and improving water quality.

Eurasian beavers are a native species in the UK but they were hunted to extinction in the 16th Century.

A growing rewilding movement throughout the 20th Century resulted in proposals to reintroduce the species.

The reintroduction was supposed to happen through a gradual official rollout organised by the Scottish Wildlife Trust.

But over fears it might not happen, groups of campaigners illegally released the animals from private collections held in Perthshire around 2000.

There was a further introduction of more animals in 2009 through an official Scottish Wildlife Trust scheme.

The new survey by NatureScot found that most of the 1,000 in Scotland today came from the illegal release, rather than the later official rollout.

‘Beavers are nature’s supreme water engineers, but we know they may cause severe problems in some areas, particularly for crops on prime agricultural land and for important infrastructure like road drains or railway lines,’ said Mr Kernahan.

As well as looking at the overall population and changes, the NatureScot report revealed 87 beavers had been shot by trained controllers since 2017.

This was part of a series of mitigation measures that also included dam removal, to protect farmland and other species living in the same area as the beavers.

Under species control licences reported to NatureScot in 2020, 31 beavers were trapped and moved to licensed, enclosed reintroduction projects in England; 56 beaver dams were removed; and 115 beavers were culled.

Figures indicated that between May and December 2019, 15 beavers were trapped and moved to Knapdale, Argyll, or trial reintroduction projects in England.

The survey was carried out last winter and is said to be the most comprehensive and authoritative survey of beaver numbers and their range ever conducted in Britain.

Experienced surveyors searched for signs of beavers on foot and by canoe, finding 13,204 confirmed signs such as burrows, dams, lodges, scent mounds, canal digging, and tree and crop feeding. 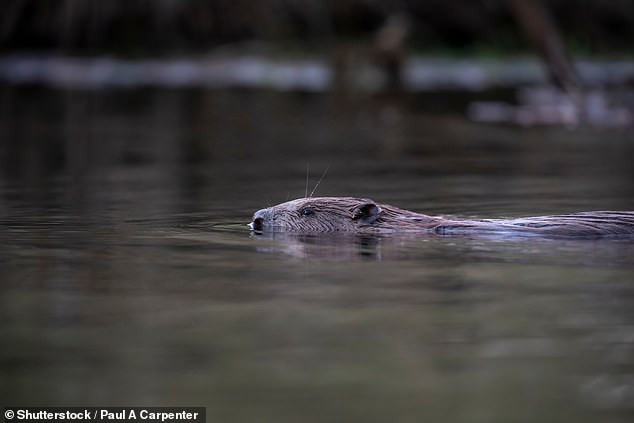 As well as looking at the overall population and changes, the NatureScot report revealed 87 beavers had been shot by trained controllers since 2017 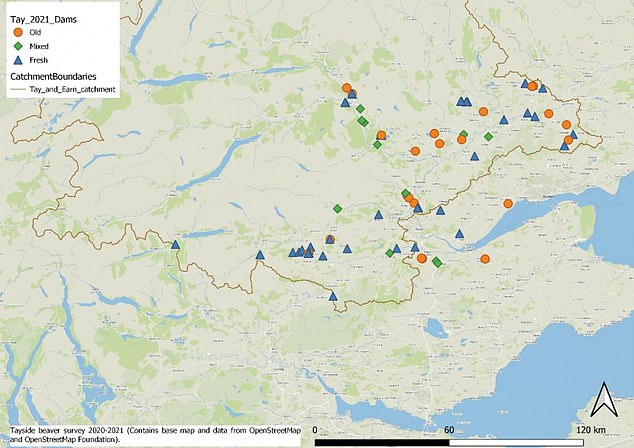 Experienced surveyors searched for signs of beavers on foot and by canoe, finding 13,204 confirmed signs such as burrows, dams, lodges, scent mounds, canal digging, and tree and crop feeding

There is some contention as to whether Beavers should have been released into the wild.

This is why the illegal rewilding happened in Scotland, over concerns the government wouldn’t back an official project.

The points on either side of the argument include the following:

The UK’s wetland fauna and flora evolved alongside beavers.

They reduce siltation, which can pollute waterways with silt and clay.

Beavers make ponds, which are needed by two-thirds of UK wildlife.

The public is in favour of restoring the animals to the wild.

Beavers can spread a foreign tapeworm to both humans and dogs.

They can damage both infrastructure and local forests.

Dams can sometimes exacerbate, rather than prevent, flooding.

NatureScot worked with Scotland’s ‘foremost beaver specialist’, Dr Roisin Campbell-Palmer, and experts at the University of Exeter to conduct the survey.

‘Beavers are recognised as ecosystem engineers with important biodiversity benefits, though some impacts can be challenging alongside certain land-use practices,’ said Dr Campbell-Palmer.

‘This survey will hopefully provide valuable information to land managers and policy makers seeking to maximise the benefits and minimise the conflicts associated with the return of beavers to our rivers.’

Scottish Greens environment spokesman Mark Ruskell said this is an endangered and protected species in Scotland and so population growth is encouraging.

‘However, this population growth does not excuse the killing or exporting of more than a tenth of the population last year,’ Mr Ruskell said.

‘It’s clear that much more can be done to manage and resolve cases where conflict arises, especially through relocating animals in Scotland to areas where they can thrive, creating eco-tourism opportunities and helping restore wetlands.’

‘We would like to see greater support for non-lethal measures including flow devices and water gates, alongside continued trials of new techniques.’

Trees for Life, a rewilding charity, accused NatureScot of suppressing the data about culling until the final population figures were released.

They have taken the agency to court over its policy on lethal control, saying it should be harder to get a licence to kill beavers.

The National Farmers Union Scotland says they believe the current approach is proportionate with culling as a last resort, with NatureScot saying they can cause severe problems in some areas.

As well as Scotland, there is also a population of beavers living on the River Otter, given permanent right to remain, in 2020 by Defra.

The full 2020-21 survey can be found on the NatureScot website. 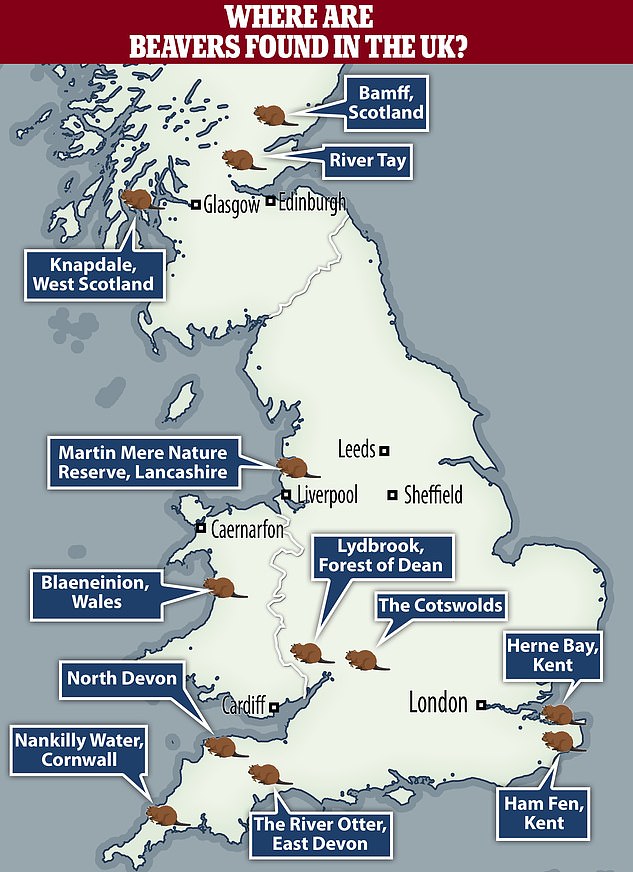 Beavers are found throughout the UK. The animals live as far north as Bamff, Scotland and as south as Nankilly Water in Cornwall

HOW AND WHY DO BEAVERS BUILD DAMS?

Beavers are found across the northern hemisphere and are among planet’s most skilled builders.

This reputation has earnt them the nickname ‘nature’s engineers’.

They fell trees by gnawing at their trunks and use the resulting sticks to construct dams to stop the movement of water in ponds, lakes, rivers and streams – creating a bodies of water with a low current.

The mammals then use sticks and mud to create a second structure – a large dome-shaped island that can reach as high as ten feet (3m) tall and up to 1,600ft (500m) long.

Each island includes two underwater entrances and a living chamber above water where the animals sleep and shelter.

Beavers often line the walls of this chamber with dry leaves and plants to insulate it during winter.

It remains unclear exactly why beavers build dams, but scientists speculate the creatures use it for warmth and shelter in the winter and as protection from predators.

Beavers are strong swimmers, and creating a reservoir of water allows the animals to play to their strengths to escape those higher in the food chain.

The biggest beaver dam ever discovered measured 2,790ft (850m) – more than twice the length of the Hoover dam.

The woodland construction, found in the southern edge of Wood Buffalo National Park in Northern Alberta, Canada, was so expansive it could be seen from space.