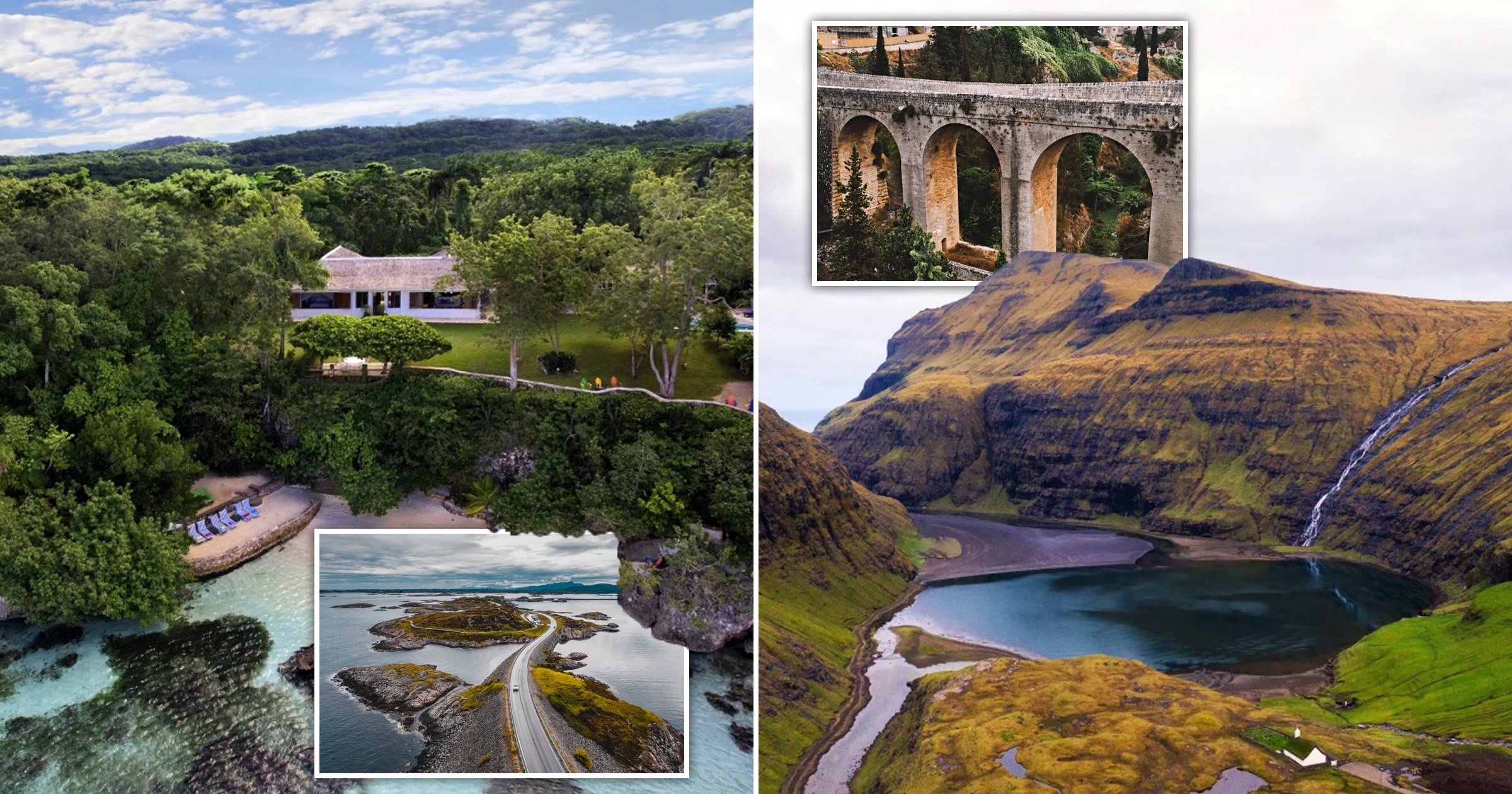 As No Time To Die hits cinemas this week, you’re sure to be wowed by the incredible scenery, as Bond travels from Italy to the rocky Faroe Islands.

Even if you’re not on Her Majesty’s Secret Service, you can visit the film’s amazing filming them for yourself, and we’ve even found places to stay that are fit for a superspy.

From Ian Fleming’s old haunt in Jamaica to the breathtaking Atlantic Ocean Road, here are the best spots from the new Bond movie.

STAY: Once slum-like, many of Matera’s cave houses are now cool hotels such as the Sextantio le Grotte della Civita.

Alongside 18 rooms, its restaurant occupies a rock-hewn church. From £150pn, mrandmrssmith.com.

Ever since introducing Ursula Andress’s conch-clasping Honey Ryder in Dr No, tropical Jamaica has been a Bond-movie regular.

In this latest cameo, the Caribbean island hosts a temporary seaside cabin in which we find Bond retired from active service, plus scenes involving old CIA chum Felix and Lashana Lynch’s new double-O.

Or stay by the Blue Lagoon at Moon San Villa’s cheerful hotel. From £133 B&B, with complimentary boat trips, moonsanvilla.com.

It’s the backdrop for — you guessed it — yet another car chase, this time along the banks of Loch Laggan’s Ardverikie Estate just outside the Cairngorms National Park. Most memorably glimpsed in the trailer as a vehicle flips over, the same domain’s ancient deer forest also features.

STAY: Its focal point, Ardverikie House — best known as baronial Glenbogle from the BBC series Monarch Of The Glen — is a turreted, Victorian Gothic manor dating to the 19th century.

Staying in one of six cottages nearby, guests can fish, rock-climb and hike in between inspecting those filming locations. Seven nights from £765, self-catering, ardverikie.com.

No Time To Die’s denouement will showcase the Faroes, a small, self-governing archipelago overseen by Denmark.

The slender, northerly island of Kalsoy was used. Eleven miles long, with just four villages and about 75 inhabitants, it’s an especially dramatic place where roads snake down deep valleys and spiky peaks plunge to wild shores populated by puffins.

Set to appear in the film is dinky Kallur Lighthouse, perched precariously atop a steep cliff. Featuring some hiking, privately guided James Bond Sightseeing Tours promise to take in all the main locations. They cost from £325pp including a ferry crossing from Klaksvík (guidetofaroeislands.fo).

Norway supposedly paid more than £4m to have director Cary Joji Fukunaga shoot on location in the Scandinavian country.

They got their wish — Rami Malek’s masked baddie Safin patrols frozen Langvann, a forest-hugged lake north of capital Oslo, near the village of Hakadal, while another car chase — involving, naturally, James Bond in an Aston Martin — follows the legendary Atlantic Ocean Road (or Atlanterhavsveien).

Skipping between and over empty islets via viaducts, causeways or bridges south of Trondheim, this five-mile drive ranks among the world’s most scenic — making it perfect for our favourite spy.

STAY: For Langvann, hole up centrally at Oslo’s Clarion Collection Hotel Gabelshus — home to slick rooms despite being a century old — and take a train to Hakadal. Three nights from £540pp, including flights (sunvil.co.uk).

At your service: Three Bond experiences right here in the UK

2. On the James Bond Bus Tour of London you can see locations from films such as On Her Majesty’s Secret Service (the College of Arms) and Skyfall (MI6 HQ).

The tour, which starts at Temple Tube station and ends at the London Eye, tells the stories behind each scene.

3. Wish you were 007 for a day? Jump behind the wheel of Bond’s favourite cars and enjoy a three-mile blast in an Aston Martin Replica DB5 and V8 Vantage, with the moment captured on camera and video. Choose from a variety of locations.

escape, james bond, metro news
You may also like:

What it's like to take a walking holiday to tranquil Northumberland

The reason passengers always board planes on the left