An insider's guide to New York, from cool bars to hidden gem hotels

New York – it’s back baby! Britons have long had a love affair with New York. The soaring skyscrapers, the ever-evolving restaurant scene, unrelenting noise, and the 24/7 buzz – it is a city in constant motion. And it can make London look pastoral by comparison.

So, when the city that never sleeps closed its borders to Brits as a pandemic precaution, you could hear the collective groans from Manhattan-philes in the UK. Now that the doors are open, here’s what you need to know.

It’s not exactly the same. Like everywhere else, this city was touched by the crisis, and the scars are still there. Everyone wears a mask inside, everywhere. Vaccination double jab cards are required for entrance to every restaurant and many shops. 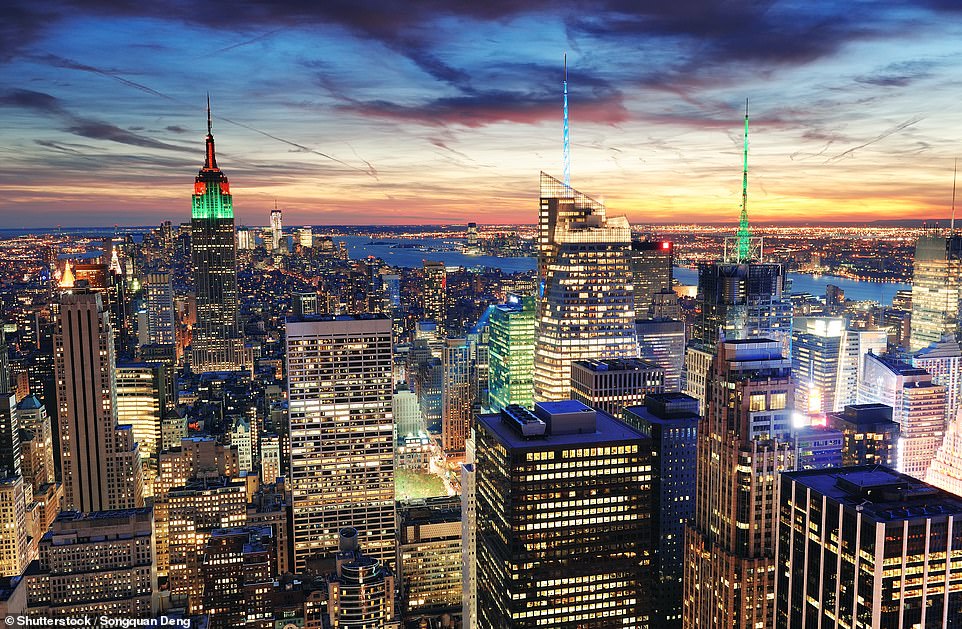 It feels like New Yorkers are on high alert. Perhaps because they still have vivid memories of lockdown.

Trapped in their (relatively) tiny apartments, with hospitals overloaded and Central Park a makeshift morgue, this famously lively place became a ghost town.

And although many shops and restaurants have failed to reopen (I counted 36 shuttered storefront windows on a cab ride of as many blocks), the irrepressible spirit of New York remains widely in evidence. Forged in the fire of 9/11, the resilience and sheer survival instincts here are on full display.

Block after block, newly reopened restaurants have set up jaunty looking marquis on the sidewalks (to comply with outdoor dining regulations), and locals are still out fast-walking, talking on their phones 24 hours a day. The buzz is back.

New York is coming back to life, slowly and cautiously yes, but coming back nonetheless. And it’s a reawakening that is very much worth celebrating.

Where to eat: For a great steak 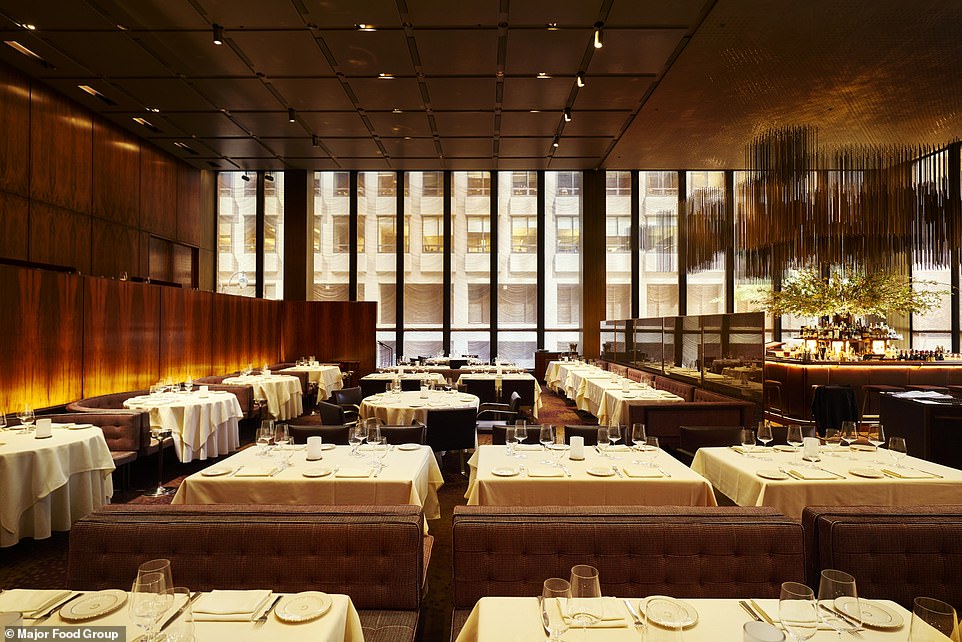 The Grill on 52nd St, pictured, is set in a swanky mid-century Philip Johnson-designed dining room 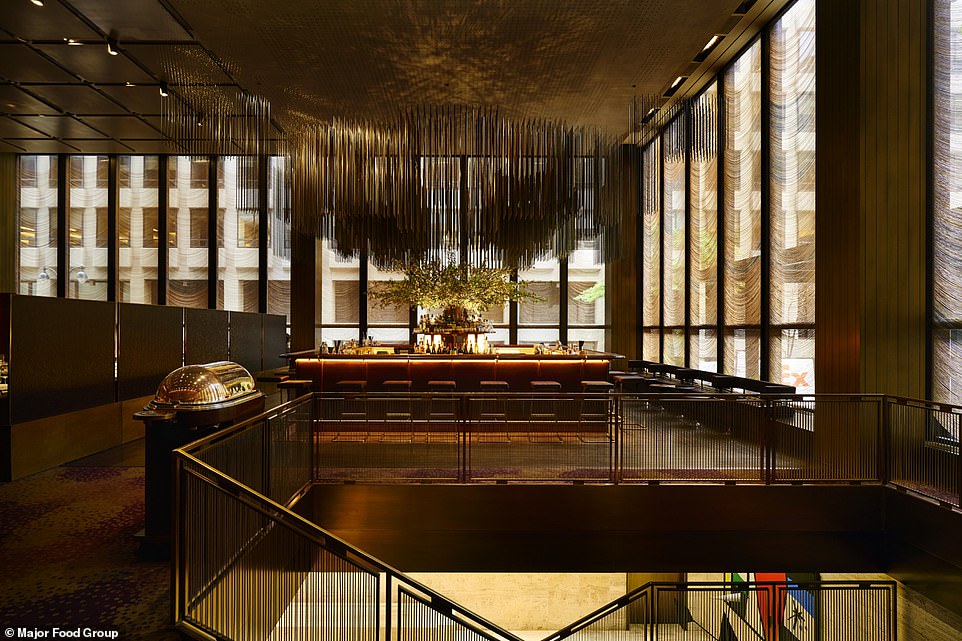 Pictured is the entrance to The Grill in Midtown, where the menu is classic New York City chophouse 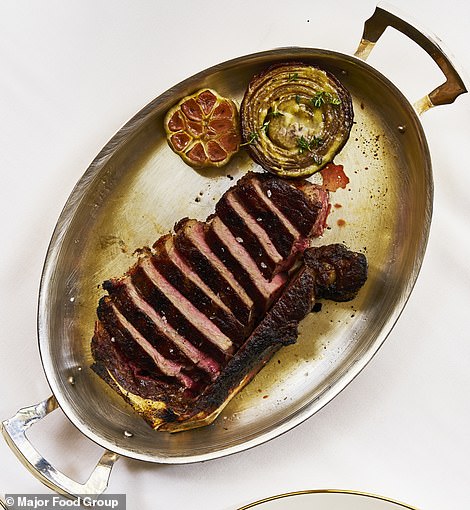 Pictured is The Grill’s strip steak, which Ashley says ‘is a standout’

Midtown for shopping is a must-do but if all of that retail therapy builds up an appetite it can be tricky to find a great place for an early dinner.

The menu is classic New York City chophouse – the New York Strip Steak is a standout, as is the lobster.

The adjoining space, The Pool, is also a great spot for a cocktail.

Where to eat: Best for families

Opt for the Mac Attack burger with bacon, American cheese and Mac n’ Cheese on a Pretzel Bun, the Rockefeller with Kobe beef, or the Ice Cream Doughwich.

Shakes are topped with everything from bananas to s’mores to rainbow cookies.

Where to eat: For a fun night out with friends 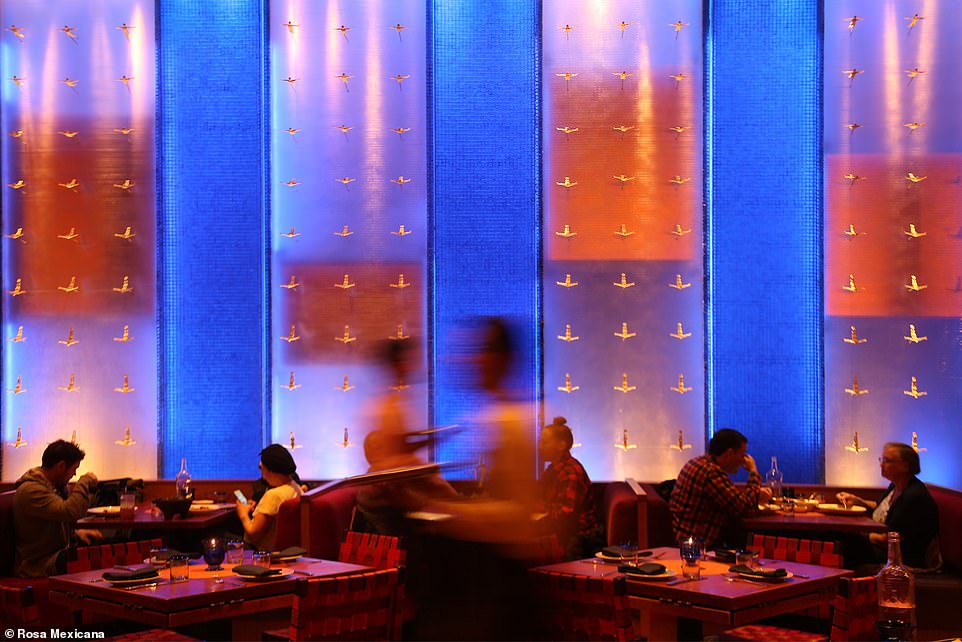 Rosa Mexicana, pictured above, has been a New York classic since it opened in 1984 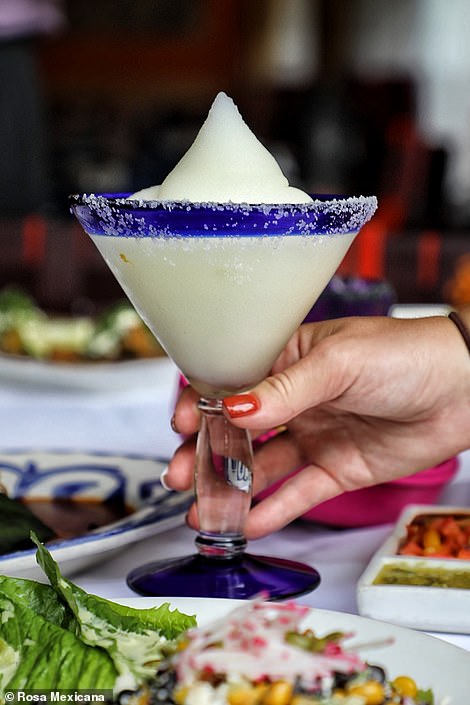 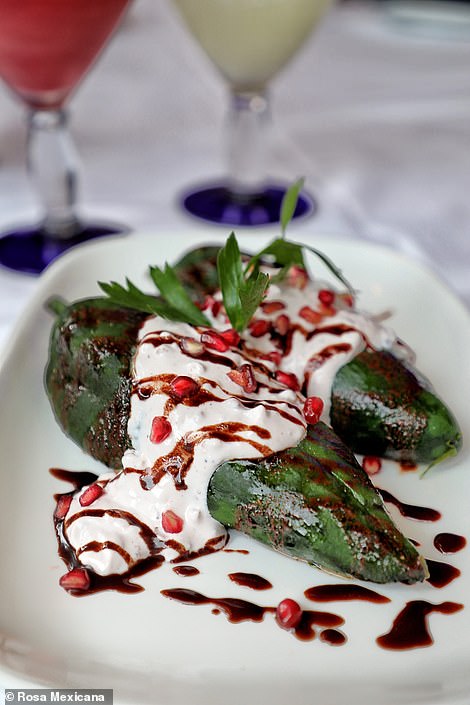 Pictured on the left is one of Rosa Mexicana’s frozen margaritas – Ashley recommends ordering the pomegranate variety.  The restaurant offers an elevated take on south-of-the-border cuisine, such as its tableside-prepared guacamole

A New York classic since it opened in 1984, Rosa Mexicana was designed to show diners that authentic Mexican cuisine does not always mean tacos and chilli-cheese burritos.

Their tableside prepared guacamole is what they’re famous for, along with frozen margaritas and an elevated take on south-of-the-border cuisine.

Full of stylish people out having fun, it’s a great evening. Order the Carne Asada Con Roja – the Chihuahua cheese gives it its creamy texture and the marinated meat simply melts in the mouth. And don’t leave without trying the margaritas: spicy mango, and blood orange are great, but if you don’t order the pomegranate, you are seriously missing something special. 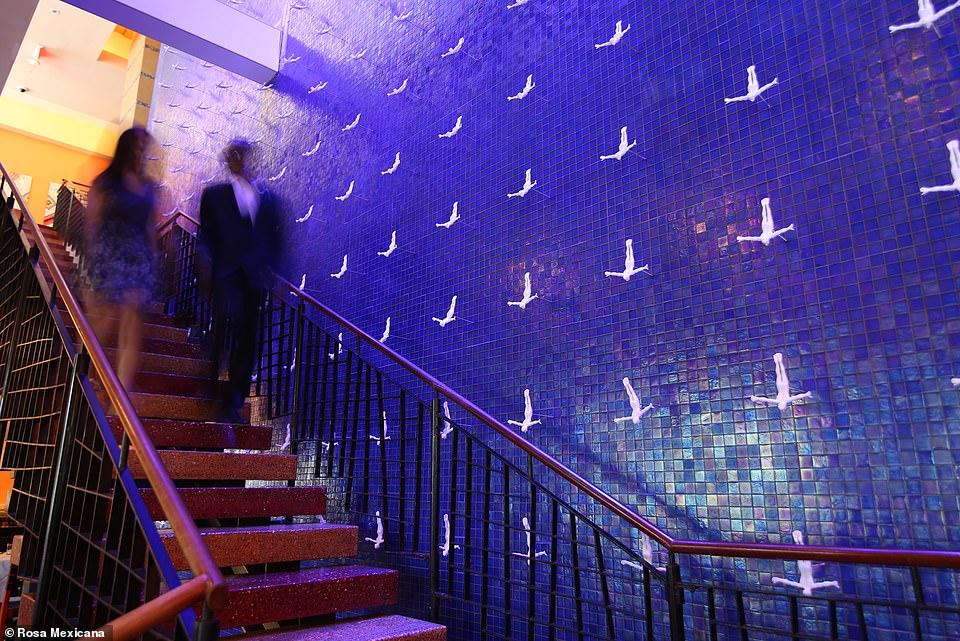 According to Ashley, Rosa Mexicana was designed to show diners that authentic Mexican cuisine does not always mean tacos and chilli-cheese burritos 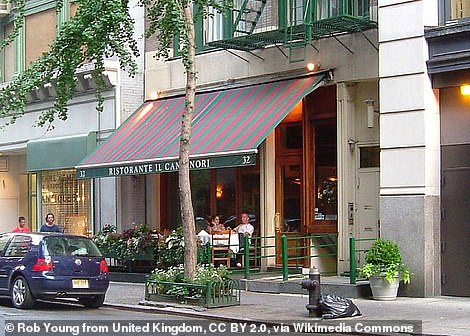 The atmosphere at Il Cantinori is pure New York – and the service outstanding. Picture courtesy of Creative Commons

Where to eat: Best for celeb-spotting

Il Cantinori – an iconic Greenwich Village Italian beloved by locals (and by locals we mean Richard Gere, (you can usually catch him on a Tuesday), Al Pacino and Julia Roberts.

The atmosphere is pure New York – eclectic, buzzing, exciting – and the service outstanding.

Jerry Seinfeld celebrates his birthday here and Gwyneth Paltrow knows all the waiters (Willy is her favourite) by name.

The food is delicious, authentic Tuscan, and the vibe is what keeps them coming back.

The restaurant features in a famous Sex and the City Episode. Carrie goes there to celebrate her 35th birthday and is stood up by her friends who mistakenly go to “El Cantinoro” – which is a block away. (Yes, it really exists too.) 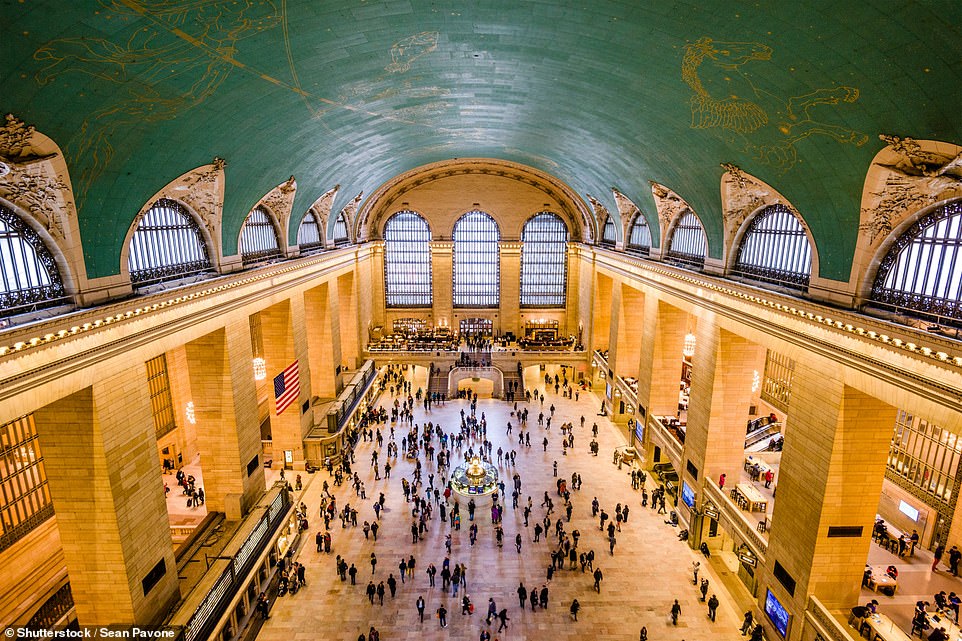 And the cocktail list is fantastic, along with the glassware. They’re worth the trip alone. 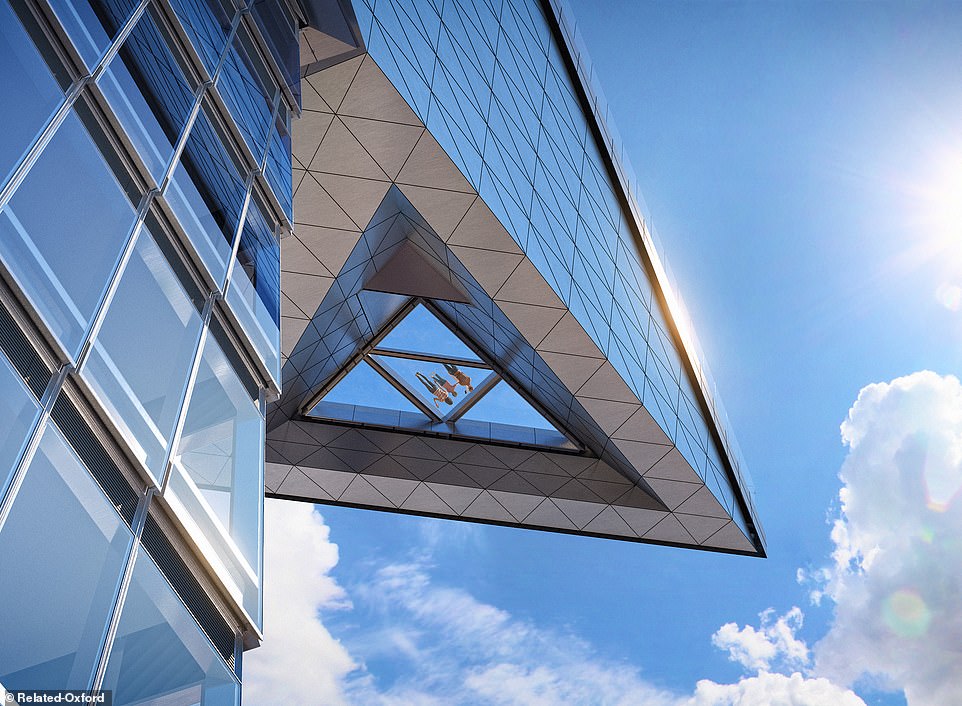 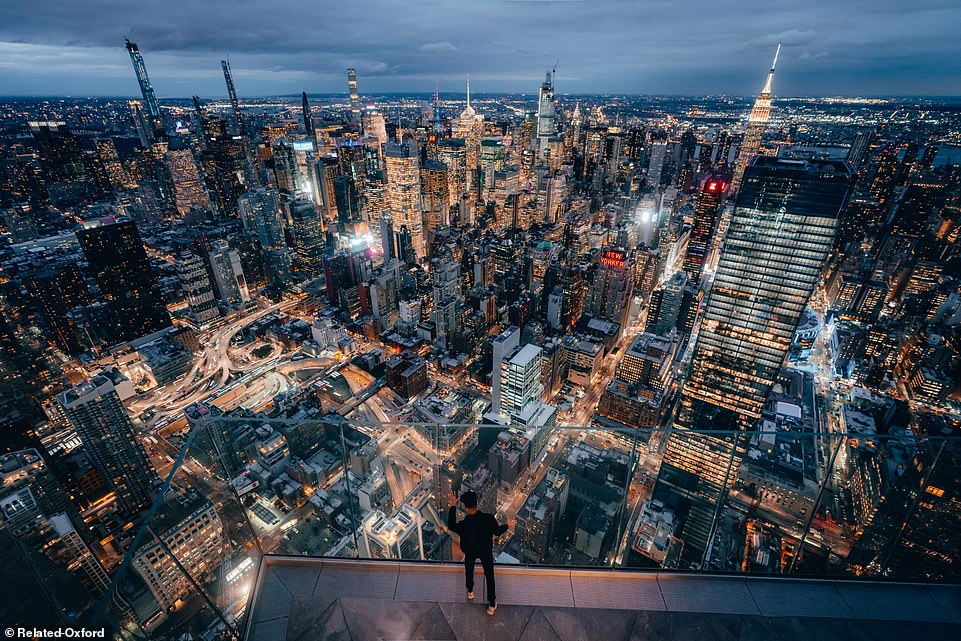 Edge – located in Manhattan’s west side – is a 1,100-foot-high observation deck boasting a 360-degree view of NYC

Hudson Yards’ Edge, which calls itself the highest outdoor sky deck in the Western Hemisphere, is a 1,100-foot-high observation deck boasting a 360-degree view of NYC.

Set on the west side of Manhattan it gives you a great skyline view – and you don’t need to get cold seeing it – they have a full indoor viewing deck.

Time your visit around sunset and you can see beautiful views across the Hudson, including twilight reflections off the Freedom Tower and Empire State Building, as the city lights begin to flicker. 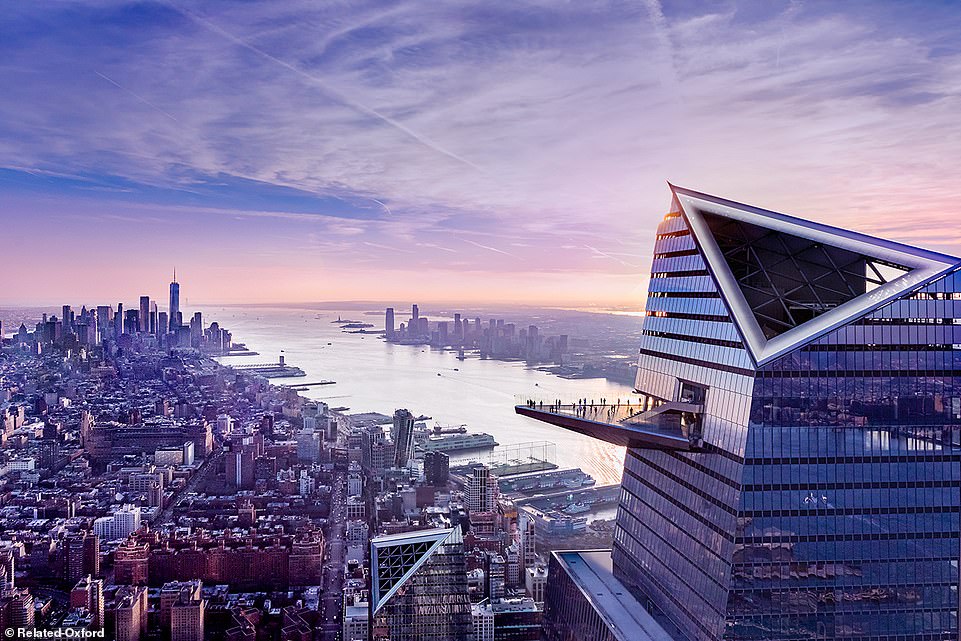 For something festive try the bar’s (of course there’s a bar) “Cocoa in the Clouds” hot chocolate layered with fresh, made-to-order whipped cream and topped with a Rice Krispie treat, coated in crushed peppermint.

Pro tip: you can add the liquor of your choice to keep things moving nicely along. 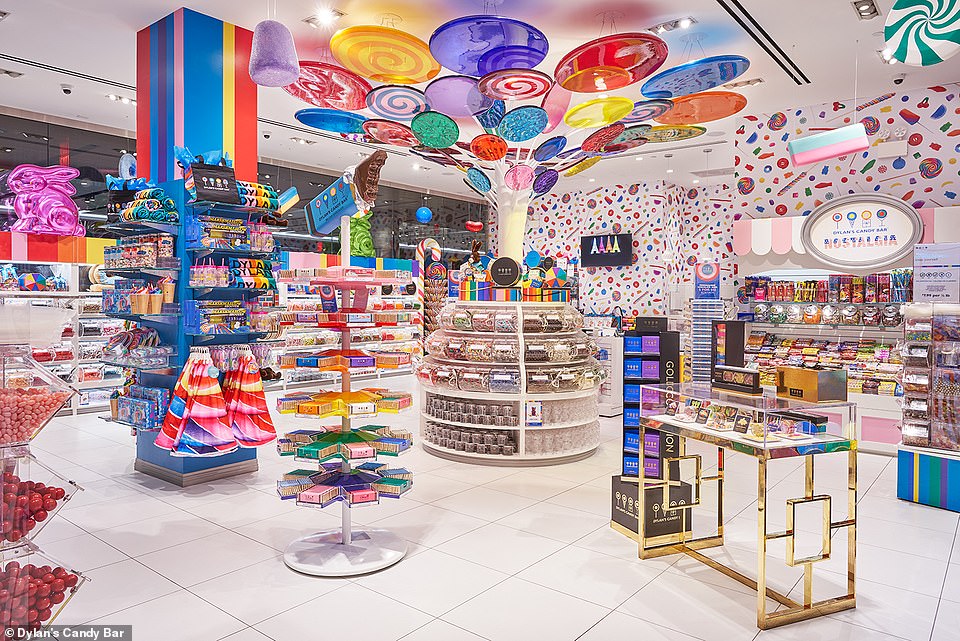 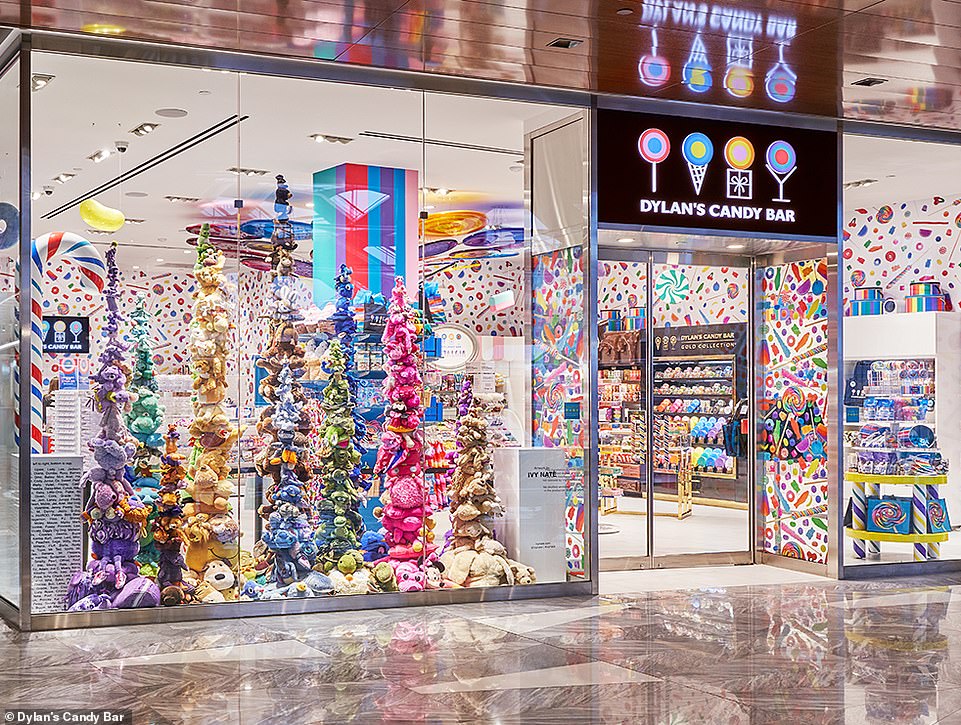 Dylan’s is an NYC landmark and a must-do for children and sweet-toothed adults. It is home to over 7,000 confections, including a huge variety of candies and candy-related gifts from around the world.

It’s basically an edible museum of candy and every single treat has been carefully chosen and curated like art.

There are several throughout the city but the Hudson Yards’ Dylan’s includes really charming candy-themed lifestyle products and an incredible dessert parlour and ice cream shop. Kids will be in heaven.

The toasted marshmallow shake was worth the trip alone and the ice cream is very likely the best you will find in New York City.

Now part of NYC folklore, the store has popped up in shows set in NYC such as Gossip Girl, Girls and Keeping Up with the Kardashians, so you can keep your cool cred with the teens, too.

Where to stay: voco The Franklin New York 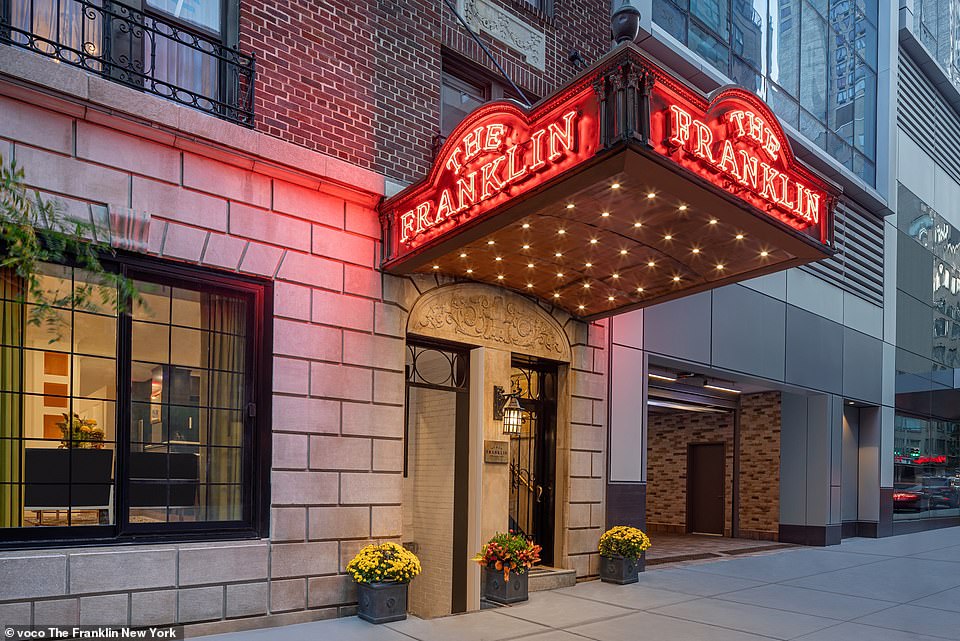 Rates at Voco The Franklin New York run as low as £139 ($190) per night, proving affordable doesn’t have to mean less in NYC 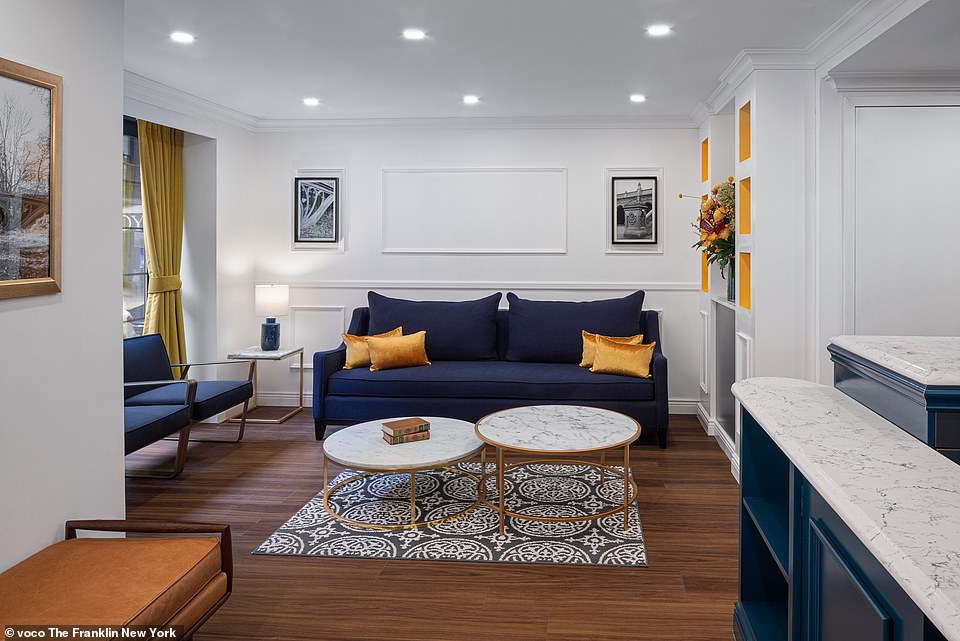 Affordable doesn’t have to mean less in NYC. And this hotel is a great example.

A stylish, chic and smart boutique hotel, rates at Voco The Franklin New York run as low as £139 ($190) per night – which for NYC is fantastic.

Following an extensive renovation, the 50-room hotel, originally built in 1930, now feels like a classic with contemporary touches.

Our room was a trendy dark blue with modern art and crisp (and luxurious-feeling) white linens on the super-comfortable bed. 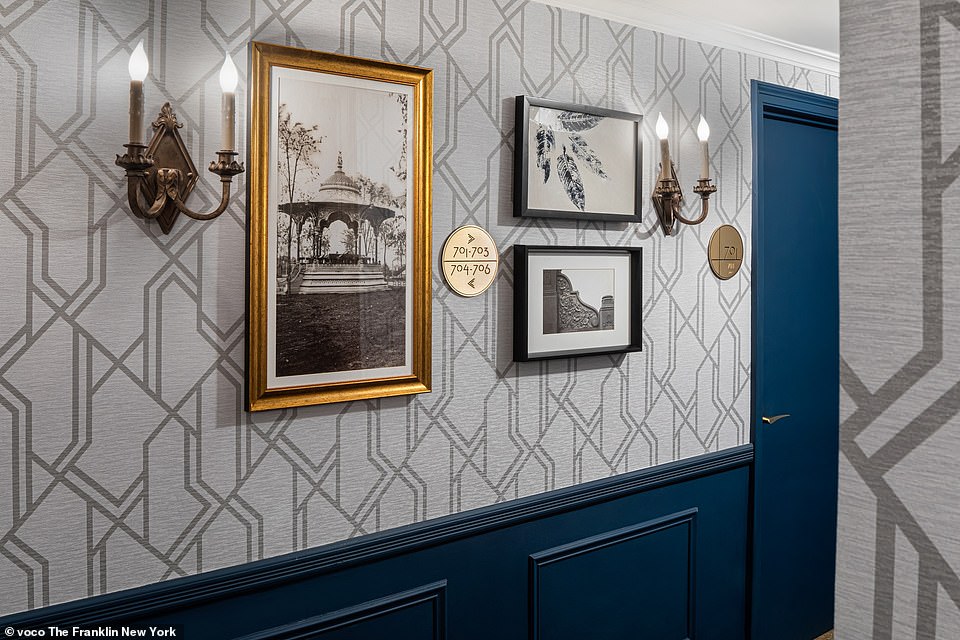 ‘Everything here feels new, modern and very clean,’ says Ashley, who checked into a trendy dark blue room during her stay

What’s more, it’s conveniently located on Manhattan’s Upper East Side – there’s a Starbucks steps away, a Whole Foods around the corner and a top Reformer Pilates studio right across the street.

It’s also close to attractions such as Museum Mile and Central Park.

It offers free morning coffee to all guests, and an on-site restaurant will be opening soon.

Where to stay: Peninsula Hotel – a modern classic 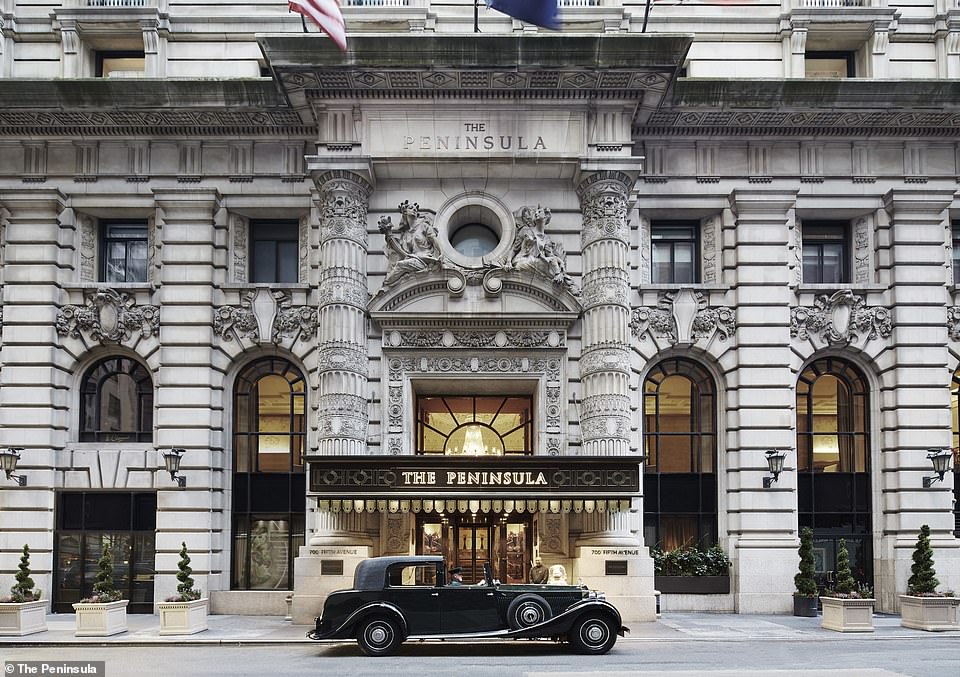 ‘As you step into the imposing lobby of The Peninsula, you can tell that you’ve arrived at someplace truly special,’ says Ashley 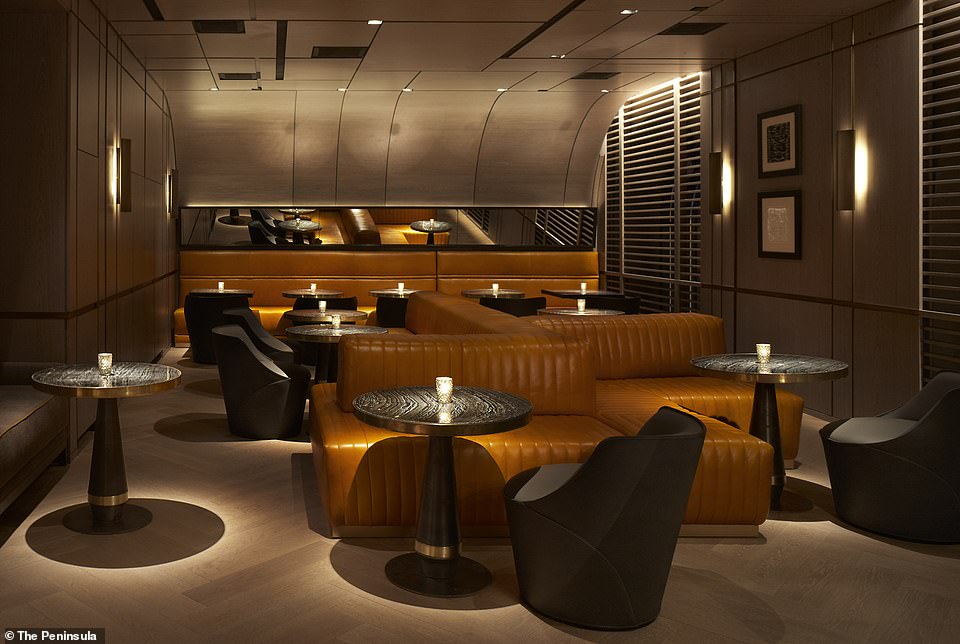 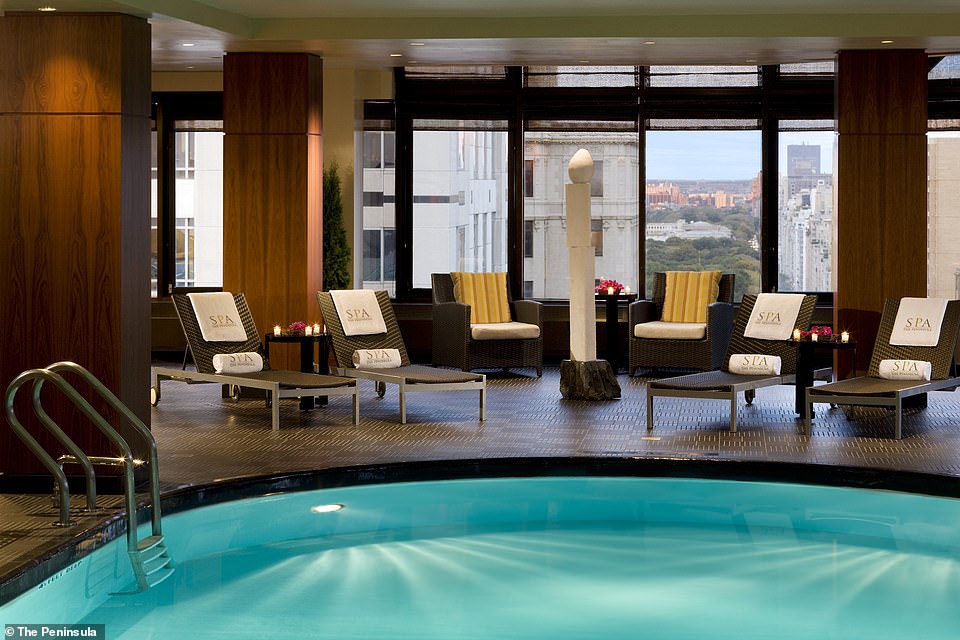 Pictured is the pool at The Peninsula’s spa. Ashley describes the hotel as ‘an oasis of soundproofed silence’

If you’re going to treat yourself for a stay, there’s nowhere better than The Peninsula hotel. As you step into the imposing lobby, you can tell that you’ve arrived someplace truly special.

The vibe in-room feels completely modern (outlets and nifty tech abound) but ultra-elegant, stylish and refined at the same time.

Amidst the plush linens, marble bath and private dining, there is smart lighting, surround sound and even a nail polish dryer on the bedside table.

The location is ideal – an oasis of soundproofed silence right in the heart of New York on snazzy Fifth Avenue. 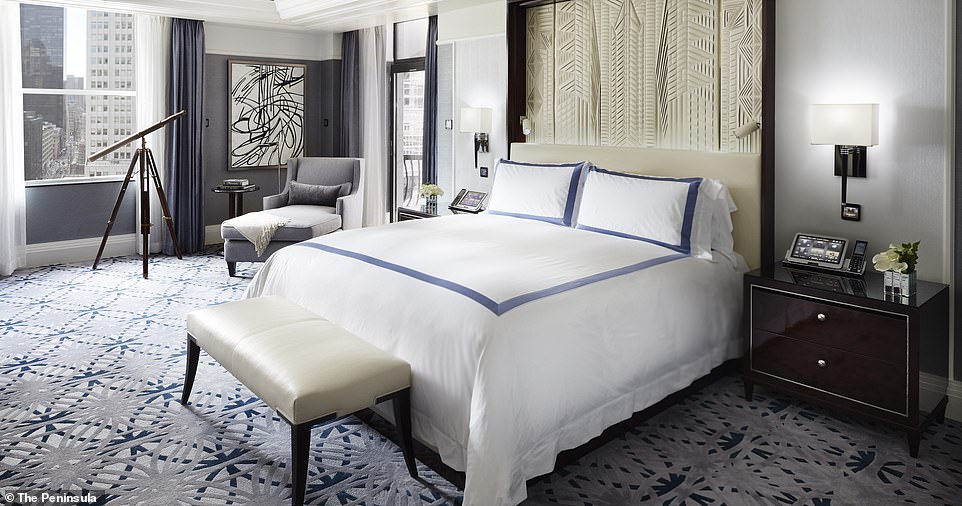 You’ll find smart lighting and surround sound in the Peninsula rooms. Pictured is the master bedroom in the hotel’s Fifth Avenue suite 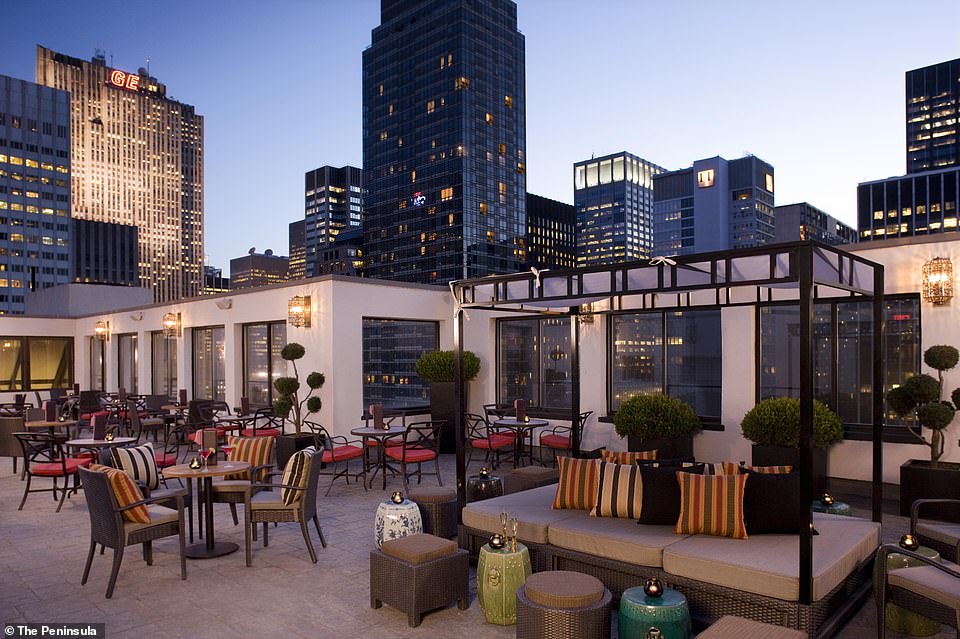 Ashley says the hotel has introduced new ‘Peninsula Time’, which means you can check in and check out at any time you want 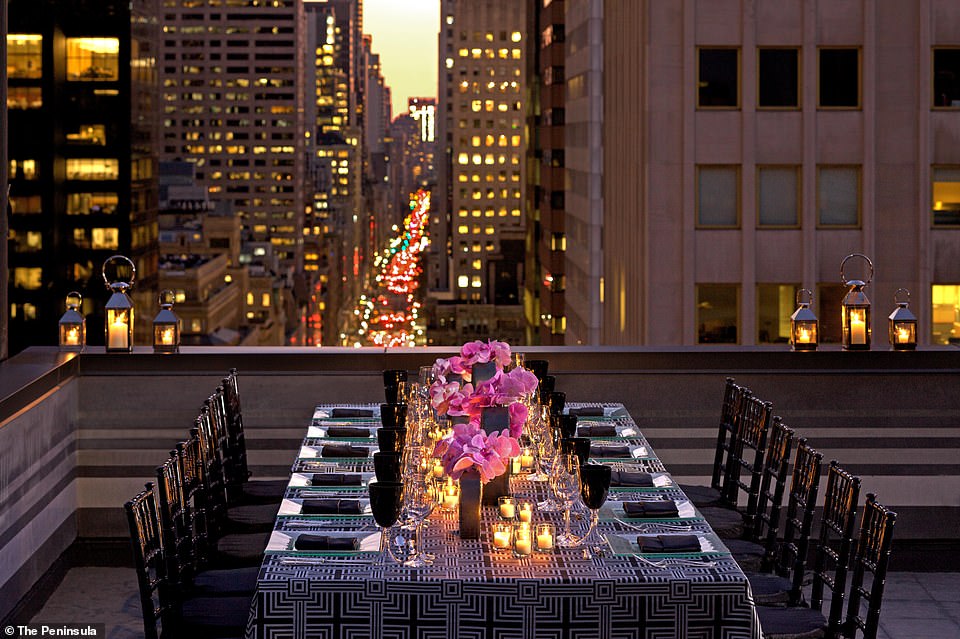 Particularly worth noting is the hotel’s new ‘Peninsula Time’, which means you can check-in and check-out at any time you want.

No more waiting around to check in – you can arrive as early as 6:00am on the day and check out as late as 10:00pm at no extra charge.

Where to stay: Spoil yourself 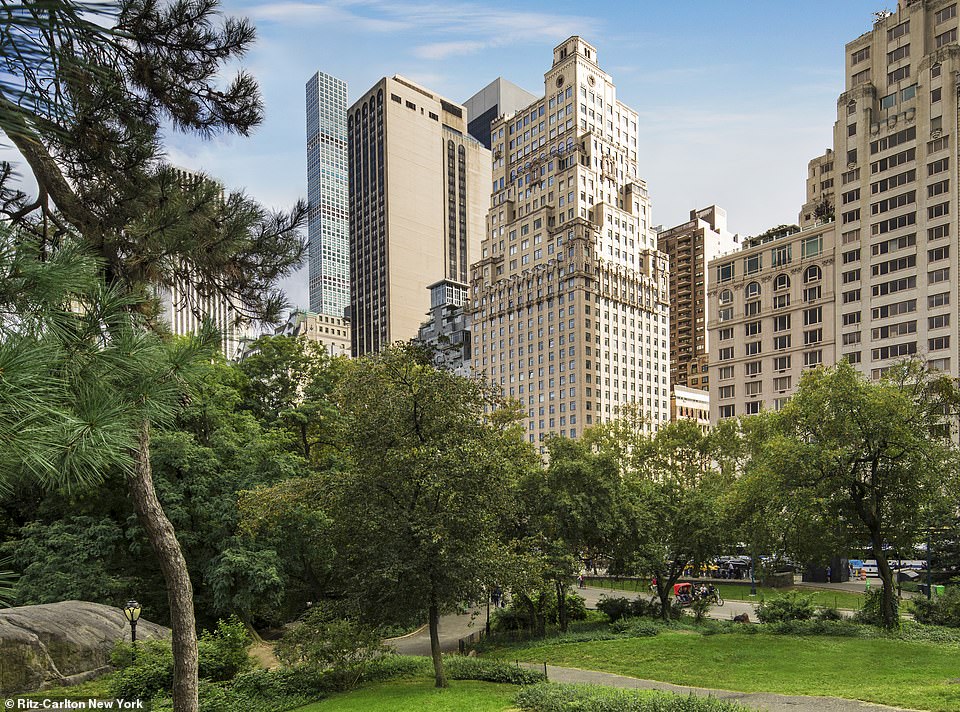 The Ritz-Carlton New York, pictured, is set within a historical building on the edge of Central Park 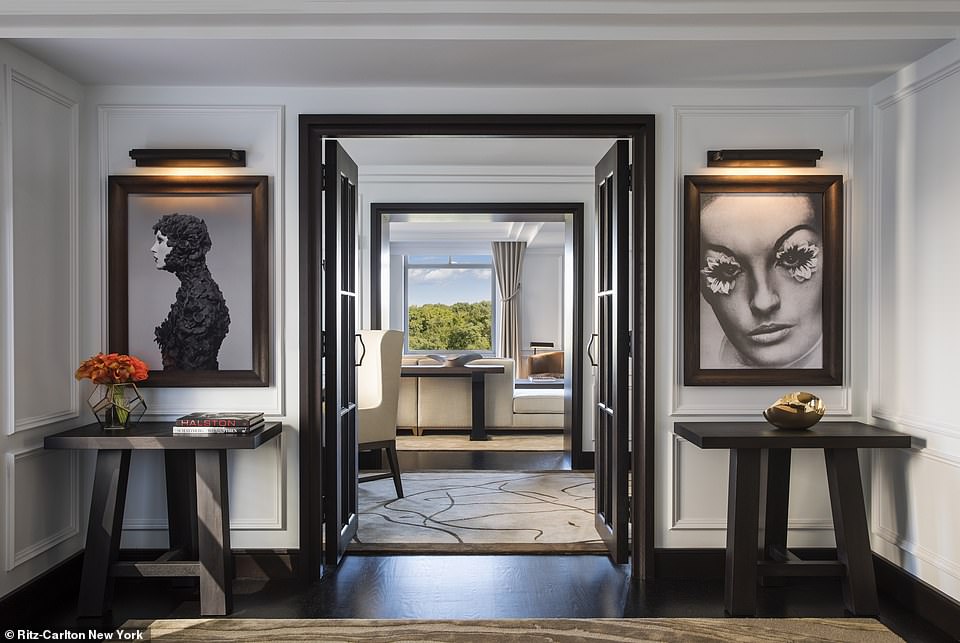 Ashley says the hotel, which has been recently renovated, ‘epitomises townhouse tranquillity’ 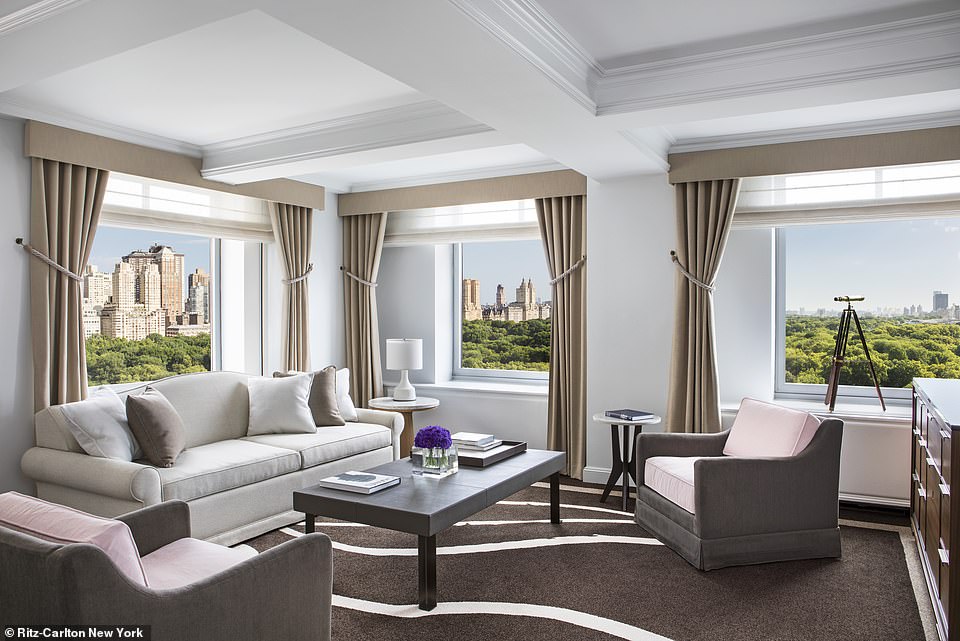 Pictured is one of the rooms overlooking Central Park. Ashley advises paying the hotel’s La Prairie Spa a visit during your stay 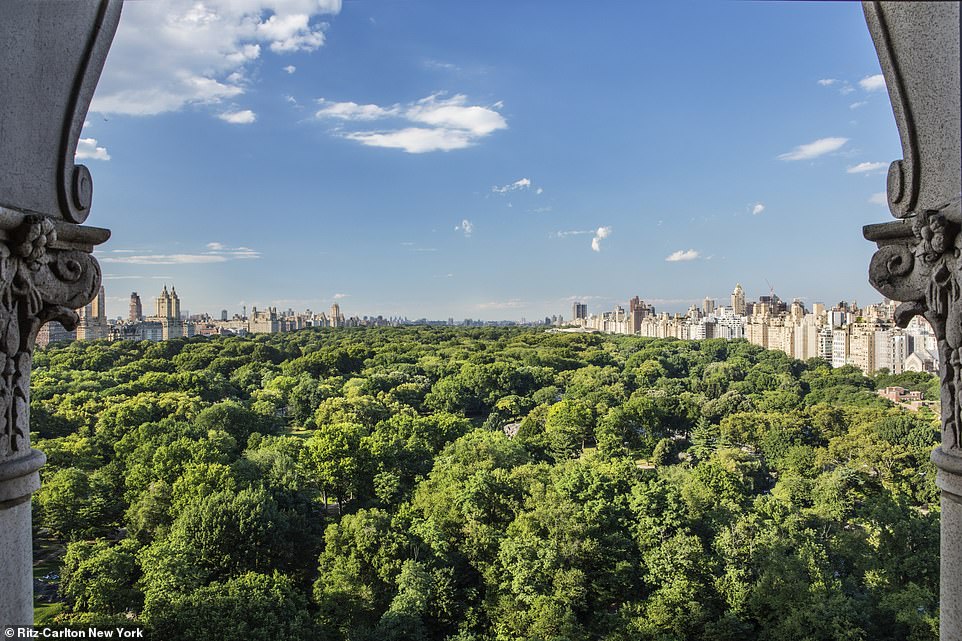 Drop in at The Ritz-Carlton New York. This beautiful hotel is set within a historical building on the edge of Central Park and has been recently renovated, epitomising townhouse tranquillity.

Don’t miss out on its newly reopened La Prairie Spa. Set downstairs it feels like you’ve entered a sanctuary and the skilled therapists here can literally transport you out of this world.

Their varied range of treatments are all designed to be both therapeutic and results-oriented. Facials blend technology with decadent ingredients, and massages release tight muscles and stagnant energy.

You can book your hotel at the same time you change currency. A new offering by money-changing experts Revolut – called Revolut Stays – offers great rates for everything from bargain B&Bs, hotels and unique, luxury lodges.

Due to Covid-19, many attractions now require reservations. Always make reservations for things like the Empire State Building or the Museum of Natural History, even for those attractions that don’t require them. Many attractions are operating at 25 to 50 per cent of their usual capacity to meet social distancing guidelines and if you don’t have a reservation, you could arrive at a time when the attraction is already at capacity.

Get this insider secret to discounts and queue jumping. You can make reservations at all major attractions through the CityPASS website and purchasing a pass gives you discounted admission for a host of places you may want to visit such as The Empire State Building, The Metropolitan Museum of Art, Guggenheim Museum, Statue of Liberty and Ellis Island or even a Circle Line Sightseeing Cruise. Once you activate your New York Citypass tickets (activation occurs when the first admission is scanned at the first attraction you visit), you will have nine consecutive days to use the remaining admissions.

An, Guide, insiders, New, to
You may also like: