Estonia’s naked truths: Let off steam in a ‘smoke sauna’ and warm to the capital of this Baltic beauty

Thwack! Thwack! I am lying naked on a wooden bench while an Estonian woman beats me with birch leaves. Believe me, there’s an innocent explanation.

I am in rural Estonia, experiencing the mysteries of a smoke sauna. After a nasty encounter with Covid, I’m keen to recharge my batteries and where better than this calm country in Europe’s north-eastern corner? A flat land, half-hidden by forests, Estonia has some of the cleanest air you can find. It also has more supermodels per capita than any other nation.

Arriving at the Mooska smoke sauna near the Latvian border, my inhibitions take a while to dissolve. Even after learning that nudity is encouraged, I cling to my skimpy towel as I enter the hut.

At first, too, I arch an eyebrow as Eda Veeroja, the earthy priestess of the place, explains the ancient magic of the sauna — how it puts you in touch with the ghosts of your ancestors, and so on. When Eda, now nude, bangs a drum and starts chanting, I and the other sweat-drenched members of my group join in. 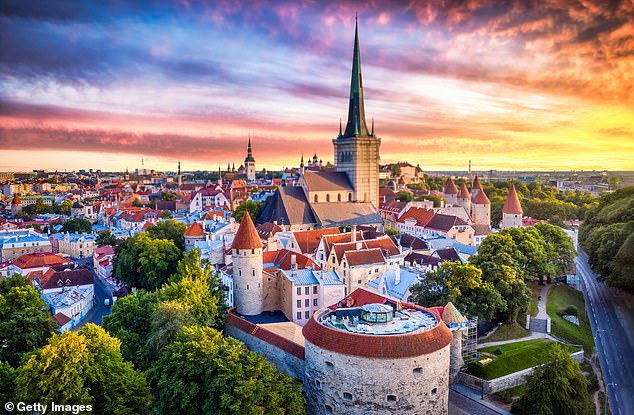 Fairytale city: The ancient spires of Tallinn’s city centre. While there Thomas discovers the work of the ‘Estonian Banksy’

We are all sporting felt sauna hats that make us look like pixies. If it gets too hot, we take a dip in the natural pool outside.

Saunas are a big deal in Estonia, but a smoke sauna is different. The scalding steam is laced with the scent of smouldering wood. Then there’s the pagan stuff. At one point, we whisk ourselves with leaves while chanting: ‘May the wisdom of my bottom go to my brain.’

Whatever next? I ask myself. The answer is the niche pastime of bog-shoeing. The bits of Estonia that aren’t forest are largely bog.

So, the next morning, we strap on plastic shoe-extensions that resemble tennis rackets, and set off with bog experts Algis and Jana. Algis spots a diminutive bog frog; Jana distinguishes the hardy sphagnum that gives the bog its reddish colour from the occasional sundew, a tiny carnivorous flower that can be used to treat herpes. 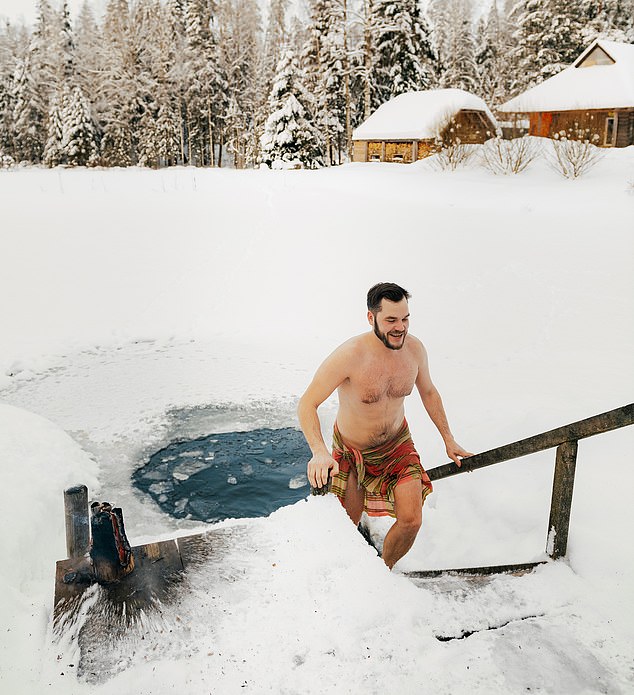 Thomas experiences a smoke sauna near the Latvian border. A natural pool outside is used for cooling off purposes (stock image)

Outside a hipster bar in Tallinn, the country’s capital, I fall into conversation with a young Frenchwoman who, frustrated by Gallic red tape, moved to Estonia to set up her own vegan cooking company.

Just across the square stands a famous work by the Estonian Banksy, a mysterious street artist known as Edward von Longus. It shows a skeleton dancing with a man who is taking a selfie.

This is in playful reference to the 16th-century painting Danse Macabre by Bernt Notke. Now housed in Tallinn’s Niguliste Museum, this splendid work shows a line of skeletons forcing humans to dance. In von Longus’s version, the tables are turned. The Grim Reaper has become just another photo op.

It would be an exaggeration to call my bout of Covid an encounter with the Grim Reaper.

But by the time I head home after five days in Estonia, I have eaten well and been beaten well.

I’ve also been bog-shod, met lovely locals — and learned far more than I had expected.