Book reveals the weird and wonderful bicycles of yesteryear

‘Boneshakers’, pedal-less ‘hobby horses’ and tyres made from leather: Fascinating book reveals the weird and wonderful bicycles of yesteryear

There have been one or two improvements in bicycle design over the years – as a fascinating book makes abundantly clear.

Bicycling Through Time showcases some of the weird, wonderful and sometimes utterly ludicrous bikes that renowned collector Paul Farren spent decades hunting down, the majority of which were from the 19th century.

The collection numbers around 200 bicycles. About 40 of them are on display in The Museum of Vehicle Evolution in the Australian town of Kialla, Victoria, and presented in the book with beautiful photographs and superb, insightful descriptions from Mr Farren, who sadly passed away in 2017.

Delve inside the tome and you’ll find Penny Farthings, boneshakers with bronze pedals, a ‘triplet’ bike with three saddles and three sets of pedals and a German army officer’s bike with tyres made from valve springs.

Mr Farren’s introduction to the book explains: ‘Towards the end of the 19th century… there was an absolute explosion of ideas applied to a machine that we now generically call the bicycle. No idea was too ludicrous to be incorporated in design if there was a skerrick of hope for it to produce an improvement in speed, comfort and efficiency. Many of these ideas have survived and are accepted as fundamental to the design of the modern bicycle. The passion of the 19th century designers oozes from every rusty tube – the mind boggles at how weird, wonderful and totally impractical some of the ideas were.’

Scroll down to see a few of the wacky bicycles featured in a book by an author who had, in the words of Annemarie Driver, the former Curator of the Canberra Bicycle Museum & Cycle Resource Centre, an ‘unsurpassed knowledge of the mechanical, social and historical aspects of vintage bikes’. 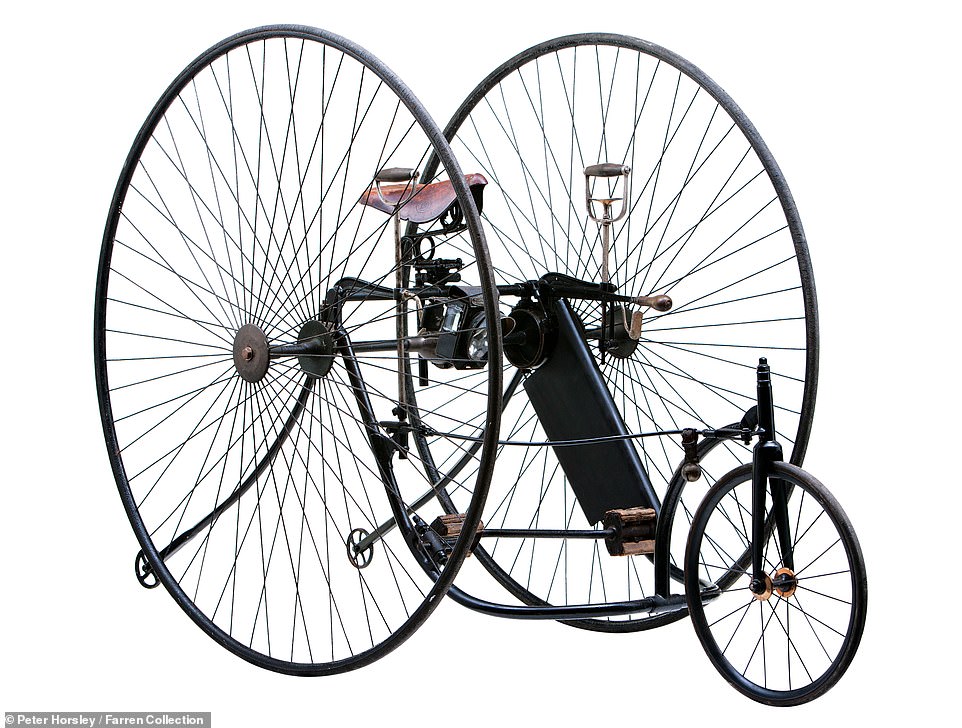 This is a Loop frame Tricycle dating to 1882 and made by the National Arms & Ammunition Co., Coventry. Mr Farren revealed: ‘The loop frame tricycle was one of the more popular designs made during the early 1880s. It is similar to The Salvo tricycle, a model Queen Victoria purchased from James Starley [an English inventor credited with being the father of the bicycle industry]. In fact, illustrations show her riding it around her estate. There were a dozen major tricycle designs and hundreds of minor variations on offer at this time.’ Mr Farren added that National Arms & Ammunition switched from armaments to bicycle production during the boom in riding at the time and changed its name to Sparkbrook, after the district of Coventry 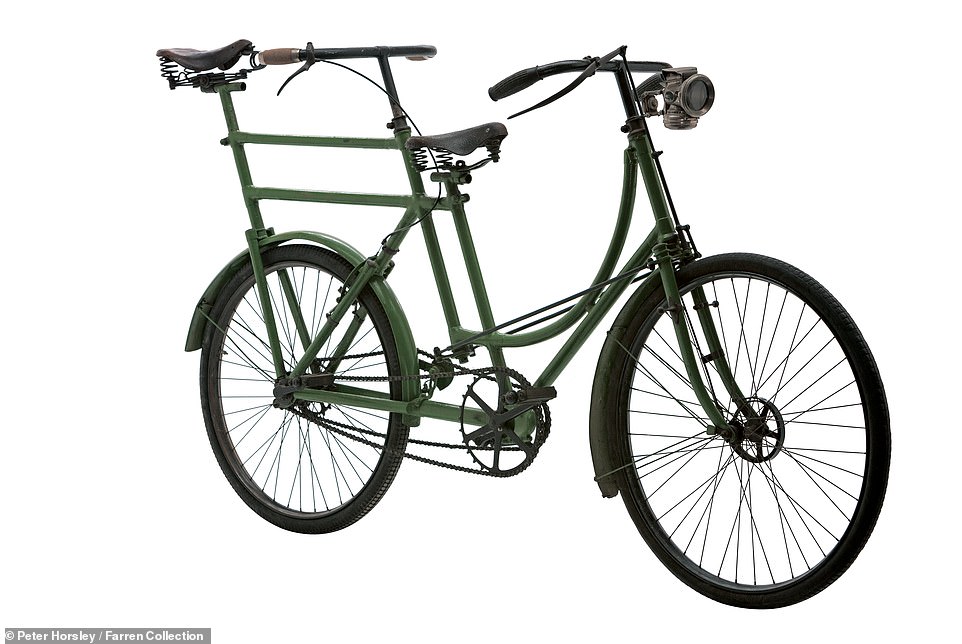 This is a ‘Donkey Back’ or ‘Man over’ Tandem, which dates to 1898 and was made by the renowned-at-the-time Chater-Lea company of London. Mr Farren explained that the rider at the rear couldn’t ride the bike alone as it would tip backwards. To start riding, the person at the front would sit with both feet on the pedals and the rear rider would push-start the machine and hop on. It could be steered from the rear as well as the front 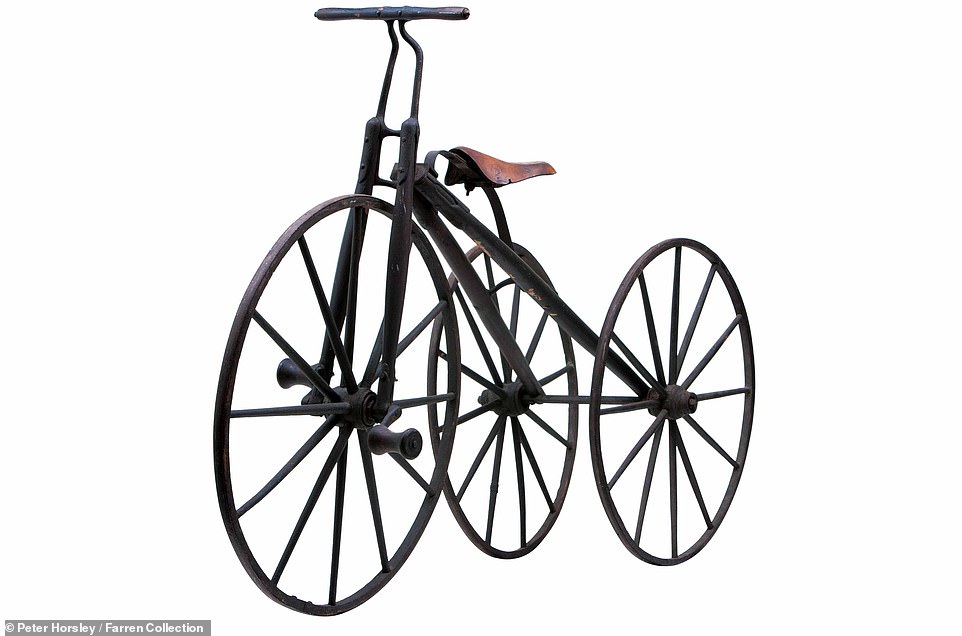 This Child’s Wood Boneshaker Tricycle was made by Chicago-based Marble and Schoeniger in 1876 and boasted wooden forks and frame. However, Mr Farren said that the distance of just 11 inches between the rear wheels ‘makes this an extremely unstable and unsafe machine’ 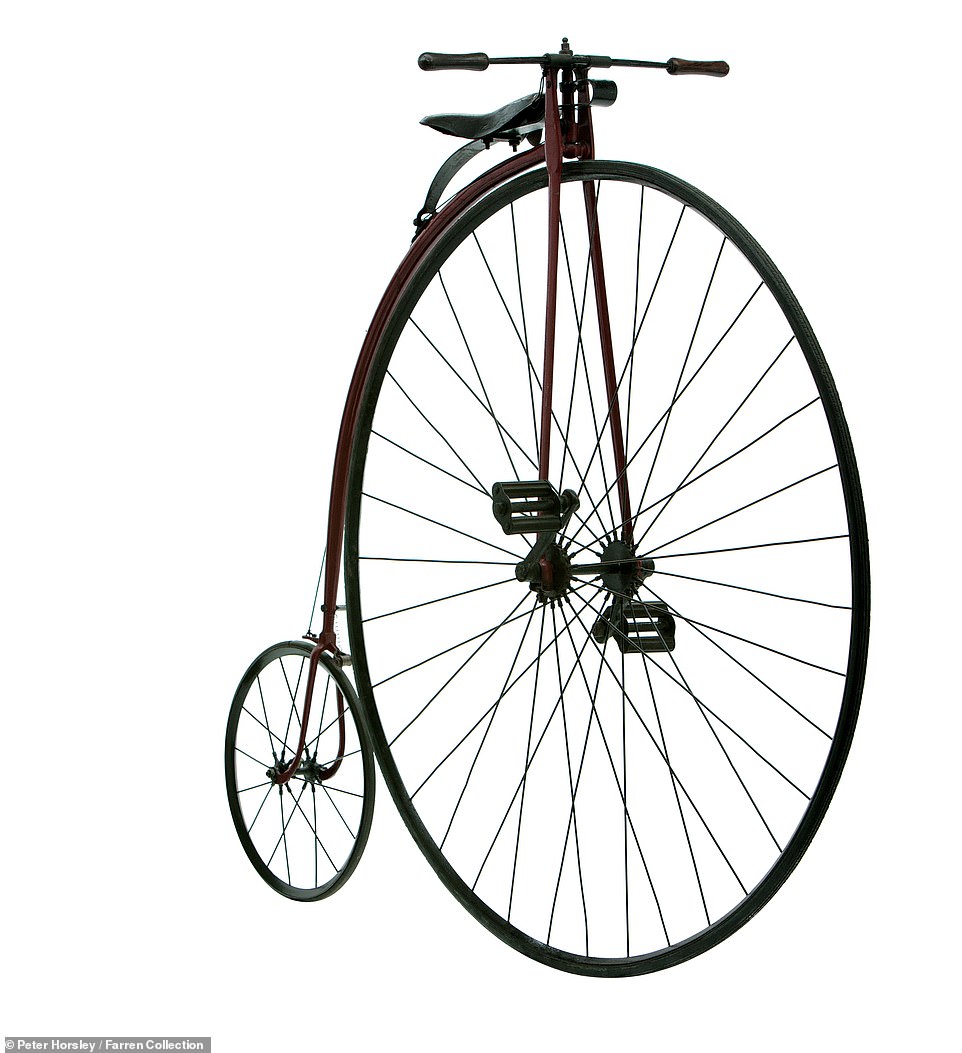 This Swiftsure Penny Farthing, made by Coventry’s Messrs Haynes & Jefferis Ariel Works, dates to 1877. And while impressive to look at, Mr Farren noted, ‘in practice it is heavy… and not pleasant to ride’. One of the irritations is the brake mechanism. Mr Farren explained: ‘Of note are the rotating handlebars to wind the rear brake down onto the tyre. In practice, these rear brakes were as good as useless’ 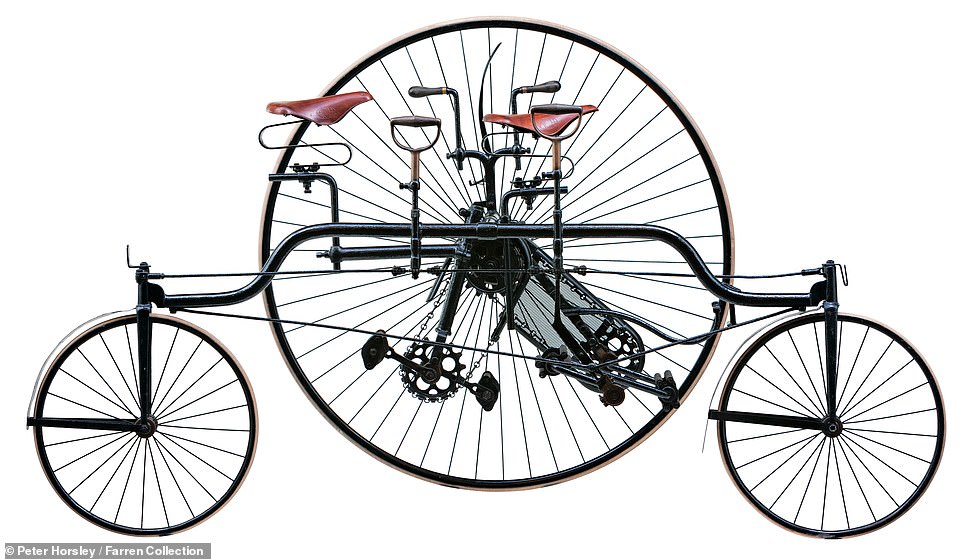 This is a Coventry Rotary Convertible Tandem Tricycle, made by Rudge Cycle Co., Coventry, in 1882. Mr Farren explained that it could be steered from the front or rear 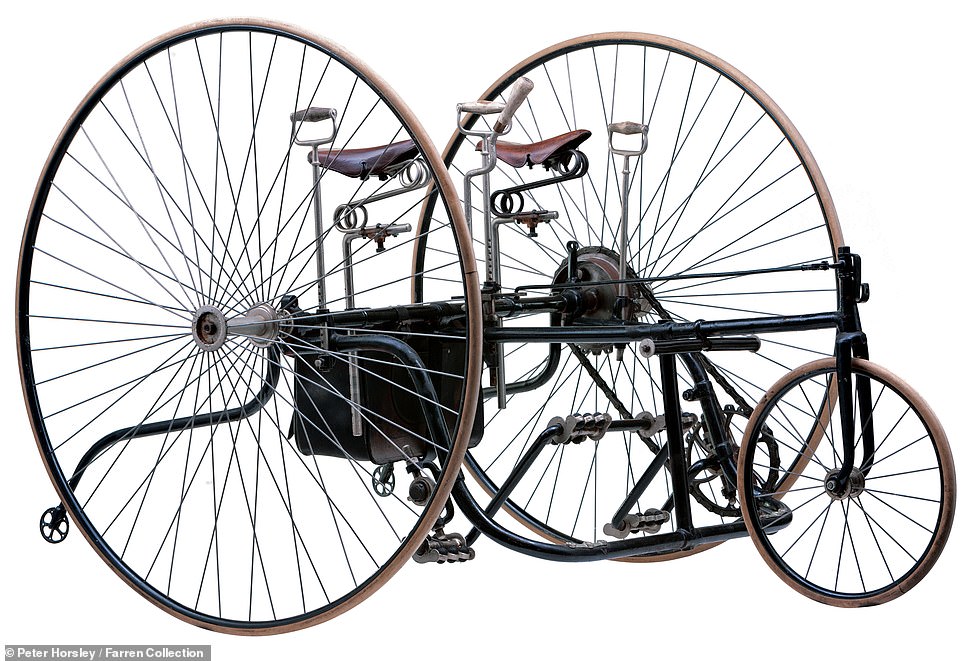 Behold the Apollo Sociable Tricycle of 1882, made by Singer & Co., Coventry. Mr Farren explained that the small wheels at the rear prevent the trike from tipping backwards as you accelerate. He added: ‘The design of the Sociable soon became obsolete and since its size made it difficult to store, very few remain. They were dropped from the catalogue in 1886. Price £36’ 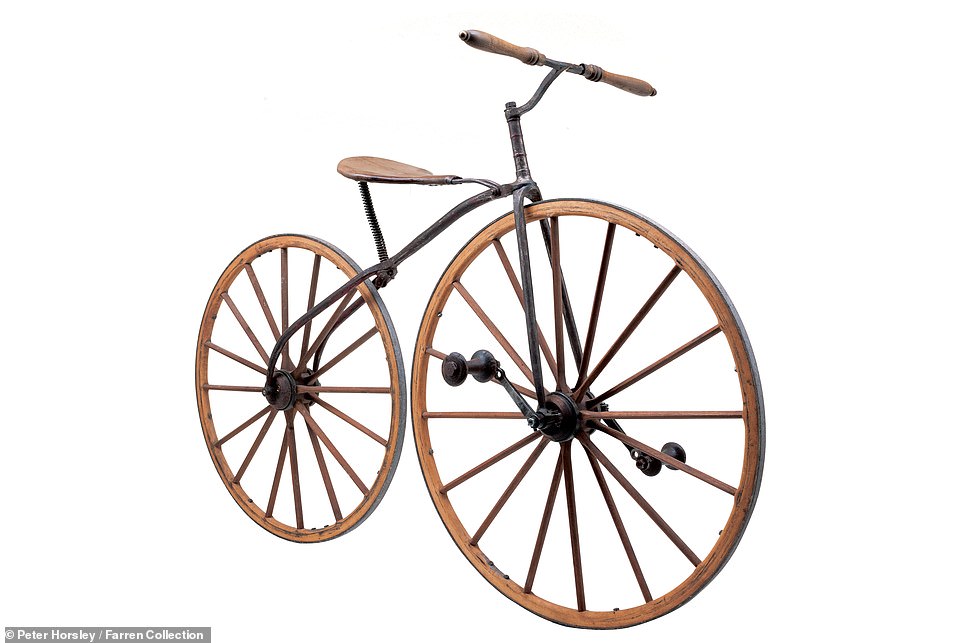 This is the ‘Barb Boneshaker’ by James Finlay of Melbourne. In the book we learn that Finlay – famous for building the gates of Government House in Melbourne – won the first bicycle race in Australia at the Melbourne Cricket Ground in 1869 ‘on either this machine or something very similar’. Finlay was a skilled local blacksmith who, according to Mr Farren, ‘undoubtedly copied the American Pickering design from an example seen in a newspaper article or mechanics journal’. The backbone was made from an old gun barrel 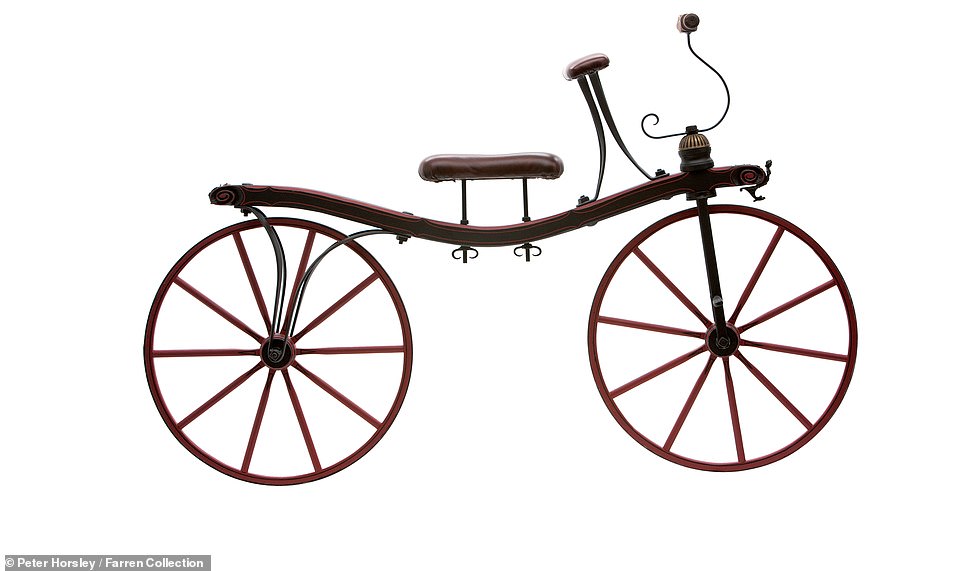 This is a 2007 replica of the Denis Johnson Hobby Horse made by Sauder & Son of the Mennonite community, Canada. Mr Farren wrote: ‘During the spring and summer of 1819, the Hobby Horse was all the rage in fashionable London society. Like all machines of this style, riders pushed along the ground with their feet to propel it. Once moving, they could coast… so it was quicker and easier than walking. The machine was equipped with an adjustable saddle and crucially a tiller mechanism to control the front wheel. A padded chest and elbow rest provided additional support for steering and pushing. To brake, riders dragged their feet’ 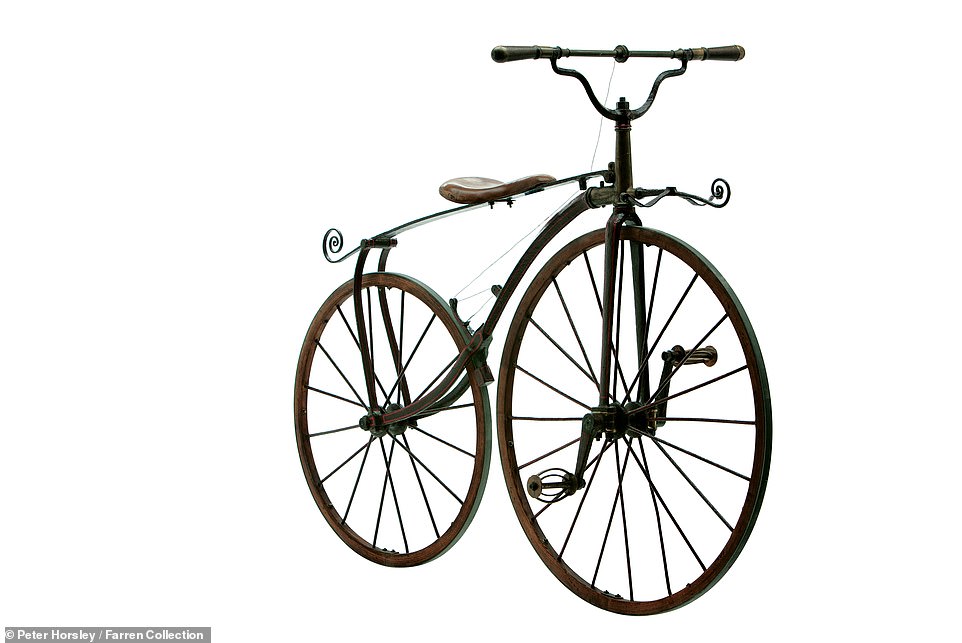 This is an 1869 ‘Boneshaker’, ‘a particularly fine example, with cast bronze head and pedals’ and ornamental flourishes. Mr Farren revealed: ‘This type of machine with wooden wheels and metal tyres, was invented by Pierre and Ernest Michaux in 1863, who named it the velocipede. They are regarded by some as the first true bicycles. The single rear brake was operated by twisting the handlebars. These machines were popular through the 1860s but, as the name suggests, they were uncomfortable to ride, heavy and under-geared’ 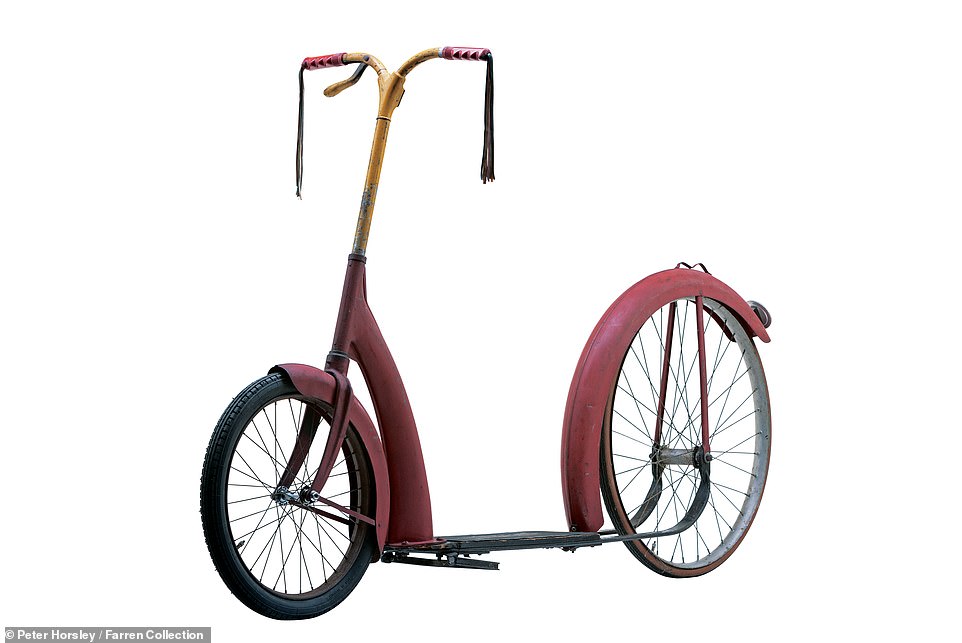 This photograph shows what was touted in the 1930s as ‘the first great advance in wheels in almost half a century’- the ‘perpetual motion’ Ingo Bike, made by the Ingersoll division of Borg Warner Co, USA. Mr Farren wrote: ‘This bike was invented by brothers Philip and Prescott Huyssen in the early 1930s. It looks more like a scooter than a bicycle, and indeed a good rider can propel it indefinitely without putting a foot to the ground. Once the rider pushes off, the bike is propelled by bending the knees and pulling on the handlebars. The floor frame is made of sprung steel and flexes. One of the brothers rode it from Chicago to Miami in 12 days, travelling at a rate of between 10 and 20 miles per hour’ 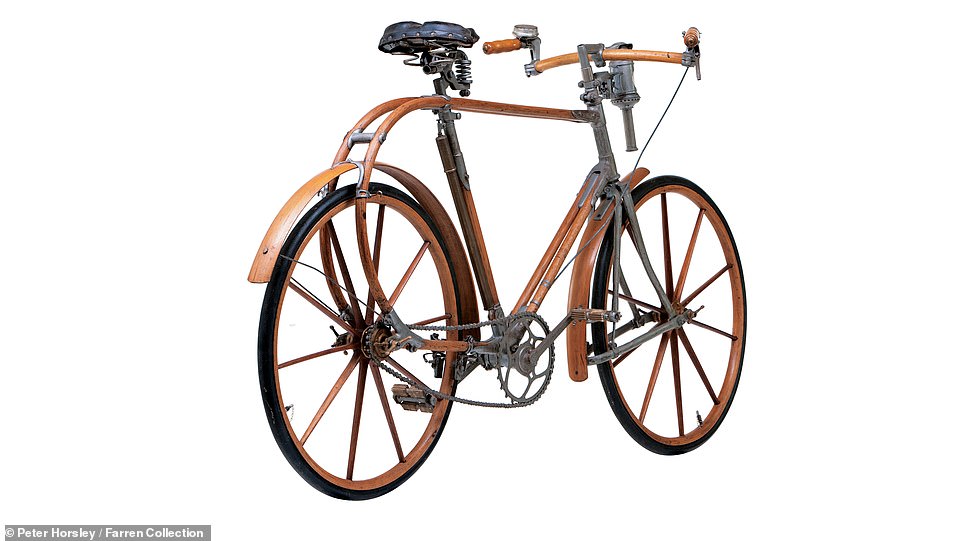 Pictured here is a rare bicycle called La Souplette, made in Paris in 1897. Mr Farren said that this example – ‘the only one with wooden wheels and front suspension’ – was one of his wife Charlie’s favourite bikes 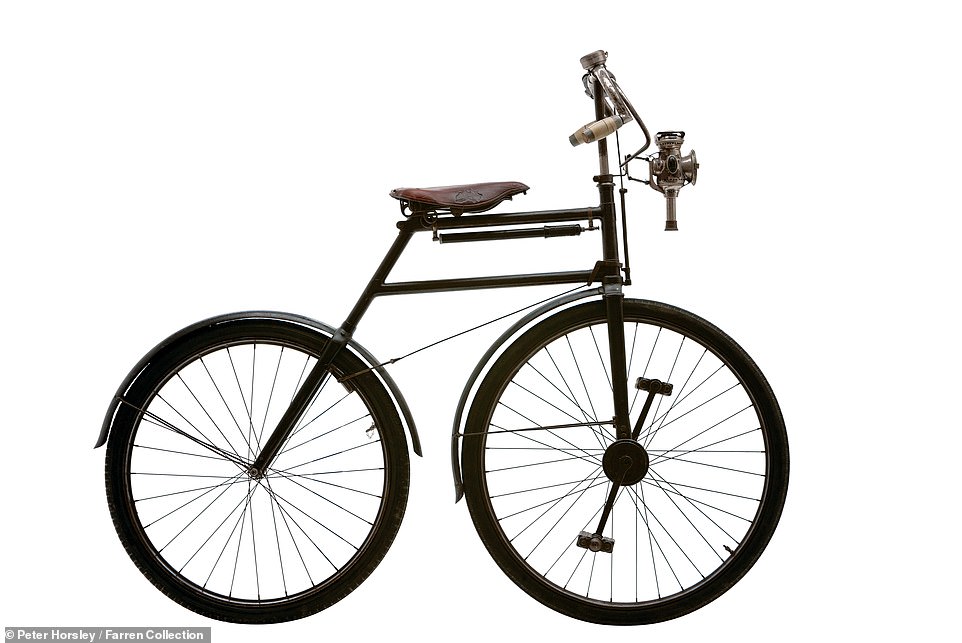 Above is an Alpha Bantam dating to 1898 and made by Crypto Cycle Co, London. Mr Farren explained how it represented the next step in bicycle evolution from the Penny Farthing. He wrote: ‘Geared front drivers evolved from the next development after the Penny Farthing and this machine was the final attempt at a front wheel drive. It features a geared front hub equivalent to riding a 72-inch diameter wheeled Penny Farthing. It was the bicycle of choice of riders who were used to the direct drive peculiarities of Penny Farthings, as opposed to the “new fangled” rear chain-driven safety bikes. The company ceased producing bicycles in 1898 and went on to make large professional bread dough mixing machines using the same type of epicyclic gearing as in these hubs. They are still in business today and known as “Crypto-Peerless”‘ 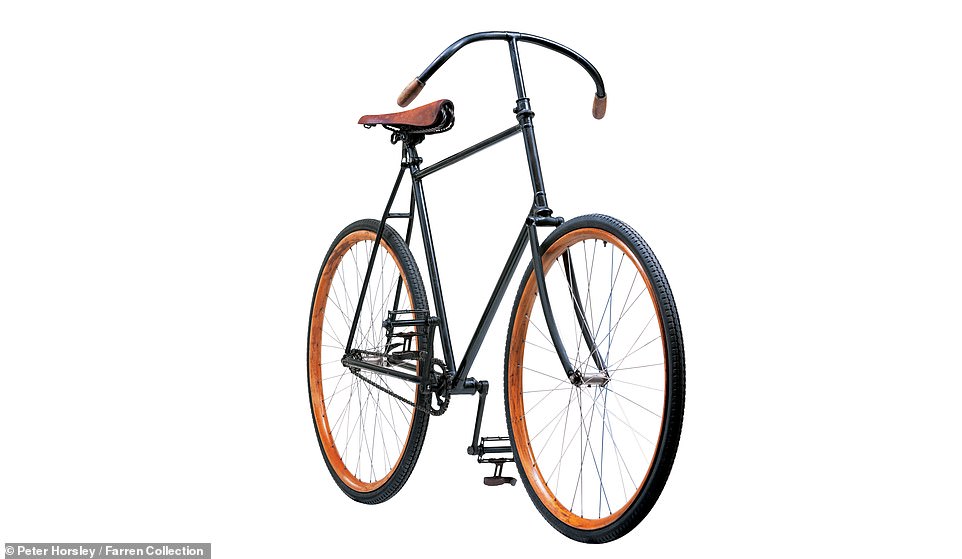 Mr Farren revealed that this bike – the 1893 Racing Bicycle by Raleigh of Nottingham – dominated bicycle racing globally for a three-year period. Mr Farren add: ‘Visually it is a very slim-tubed, lugged machine. The wooden rims came at an additional extra cost. One of the great selling points of the Raleigh machines was the easily changed front chain wheel to alter gear ratios. It was popularised by the finest bicycle rider of the time, Arthur A. Zimmerman. He came to Australia in 1895 and visited all states, winning consistently and never used higher than a 69-inch gear’

This 1928 Triplet, made by Malvern Star of Melbourne, was used, we learn, for entertainment at country cycle racing carnivals in the 1920s and 30s. While the bike was single speed and originally had drop handlebars, this example had a derailleur gear system fitted for the Great Victorian Bike Ride in 1984 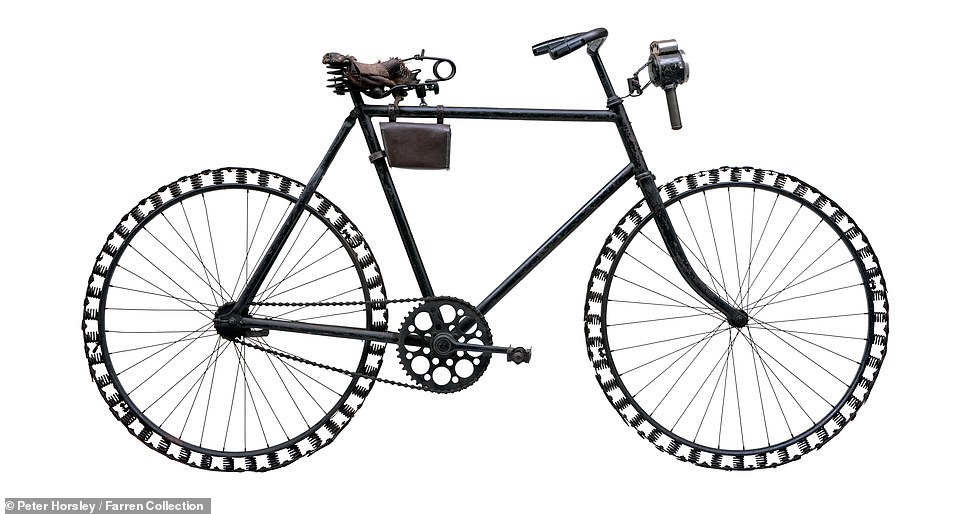 During the early part of the First World War, Germany had very little access to rubber as most of the plantations were in British hands, so this bicycle – a German officer’s machine dating to 1914-18 and possibly made by Opel – was the result of some necessary improvisation. It had leather on the outside of the wheel rims riveted to laminated spring steel, which sat on valve springs 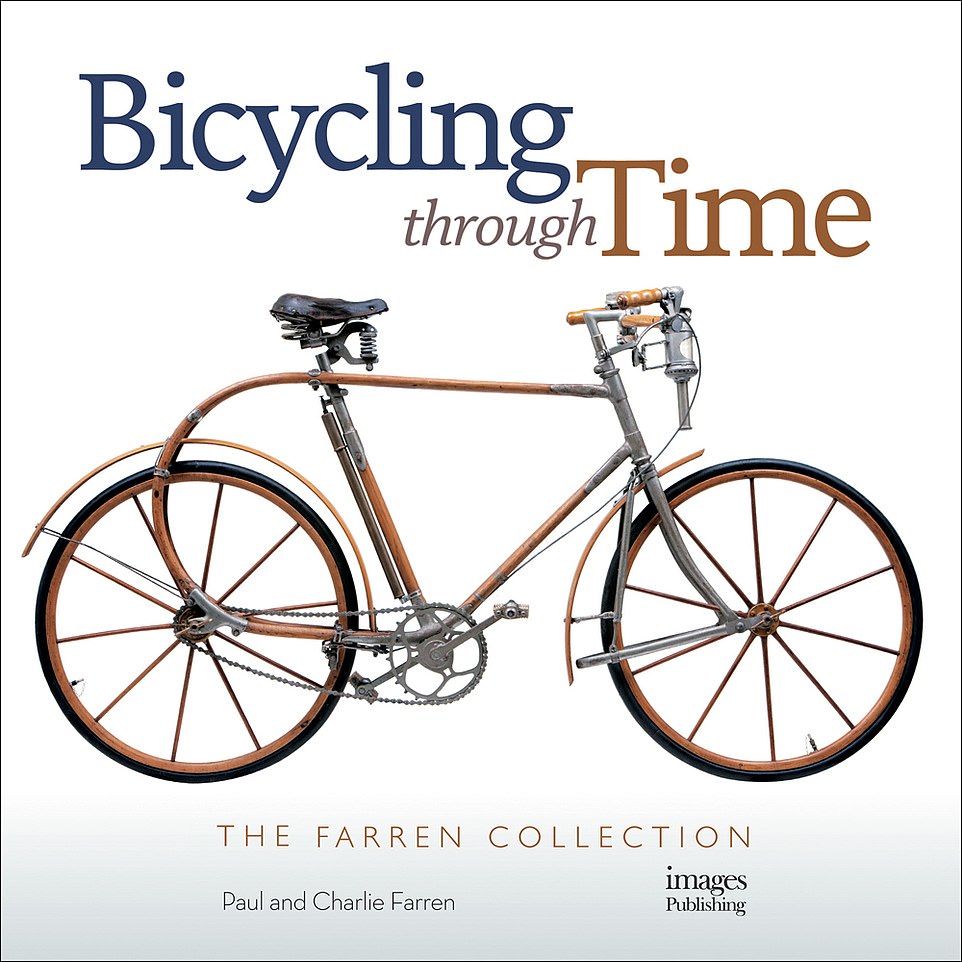 And, book, reveals, the, weird, won
You may also like: