BRITISH holidaymakers made their presence felt on Magaluf's raucous Punta Ballena strip last night, just hours after it was added to the green list.

Some ventured out in fancy dress and others with just shorts and no shirt after an afternoon of blistering heat. 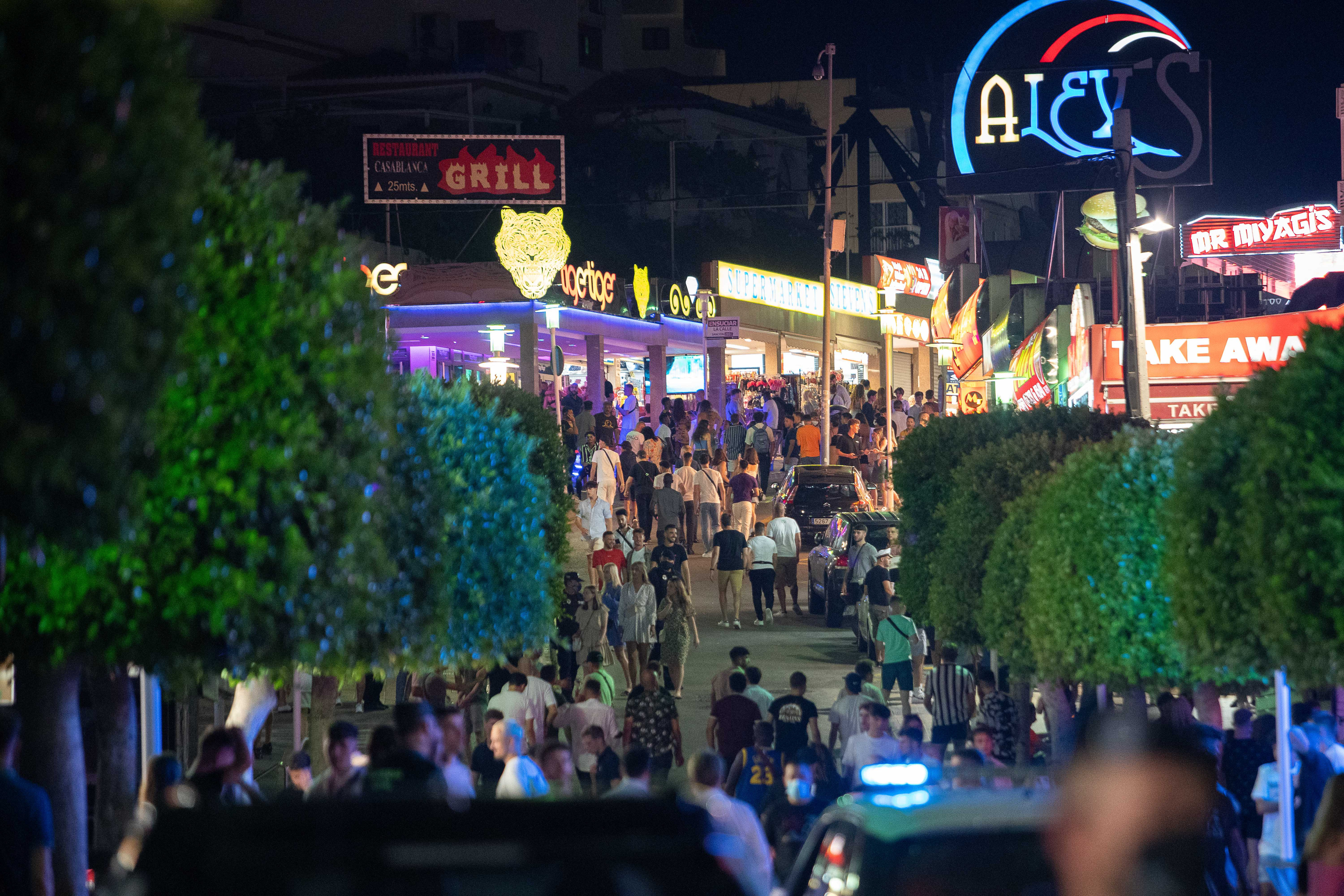 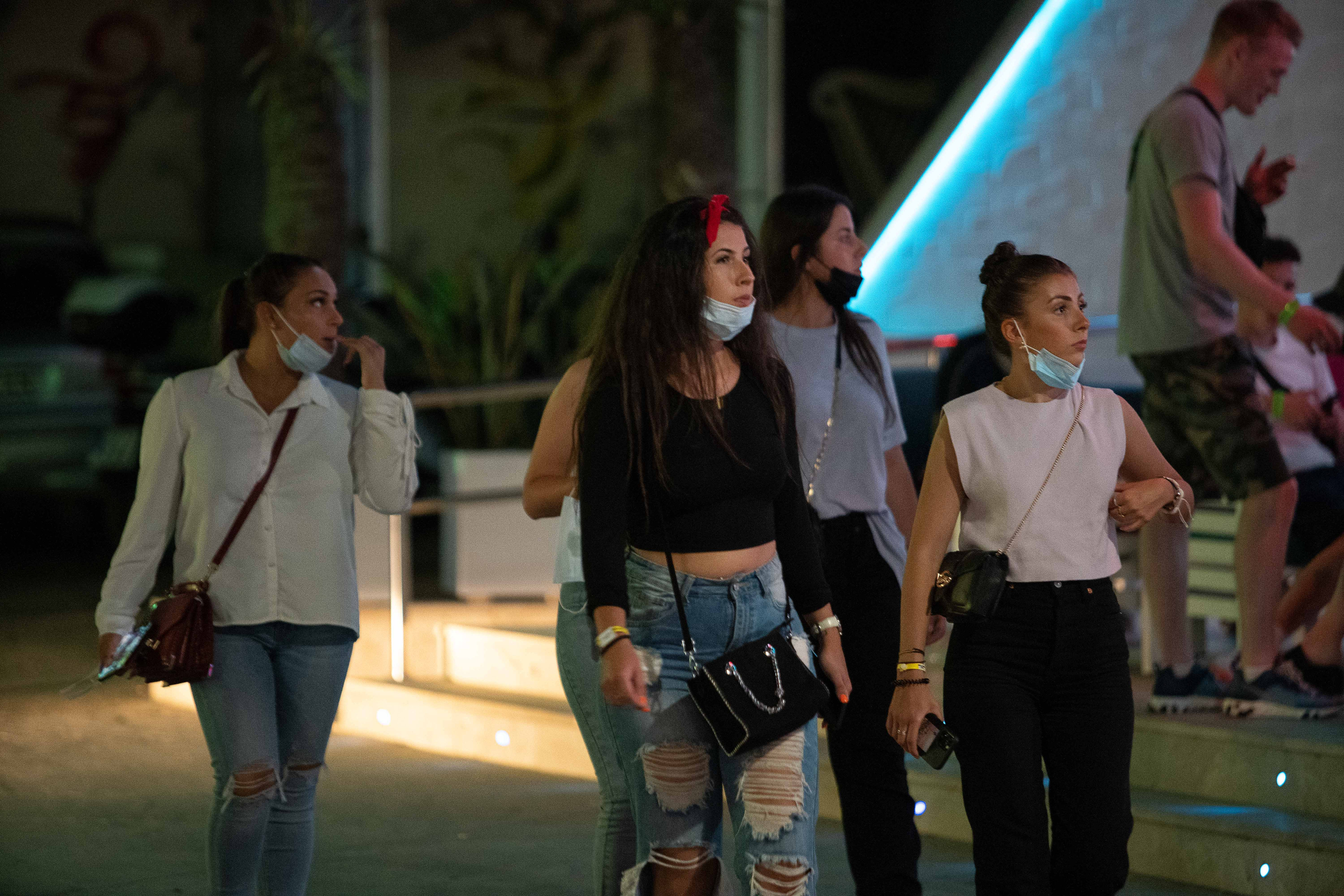 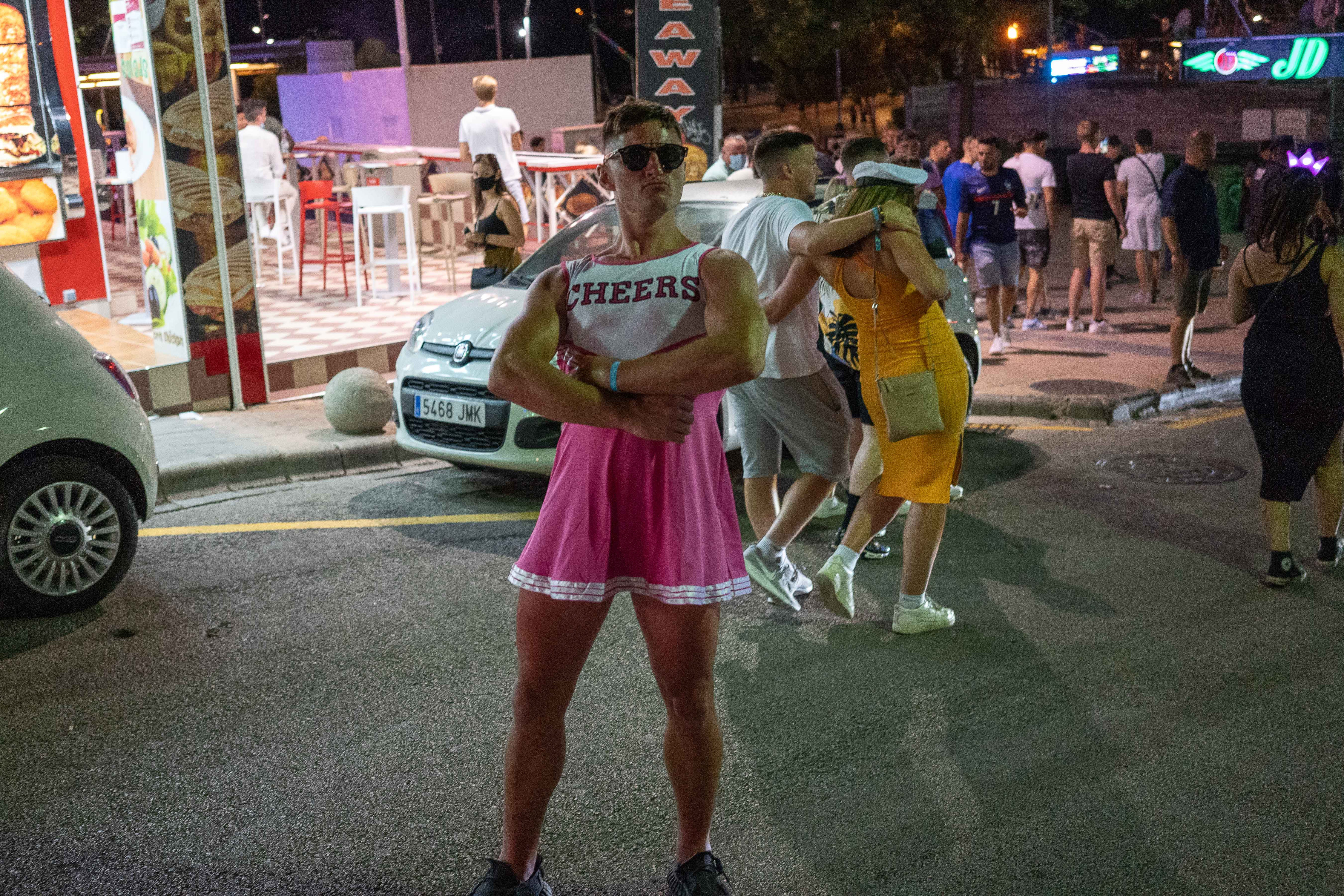 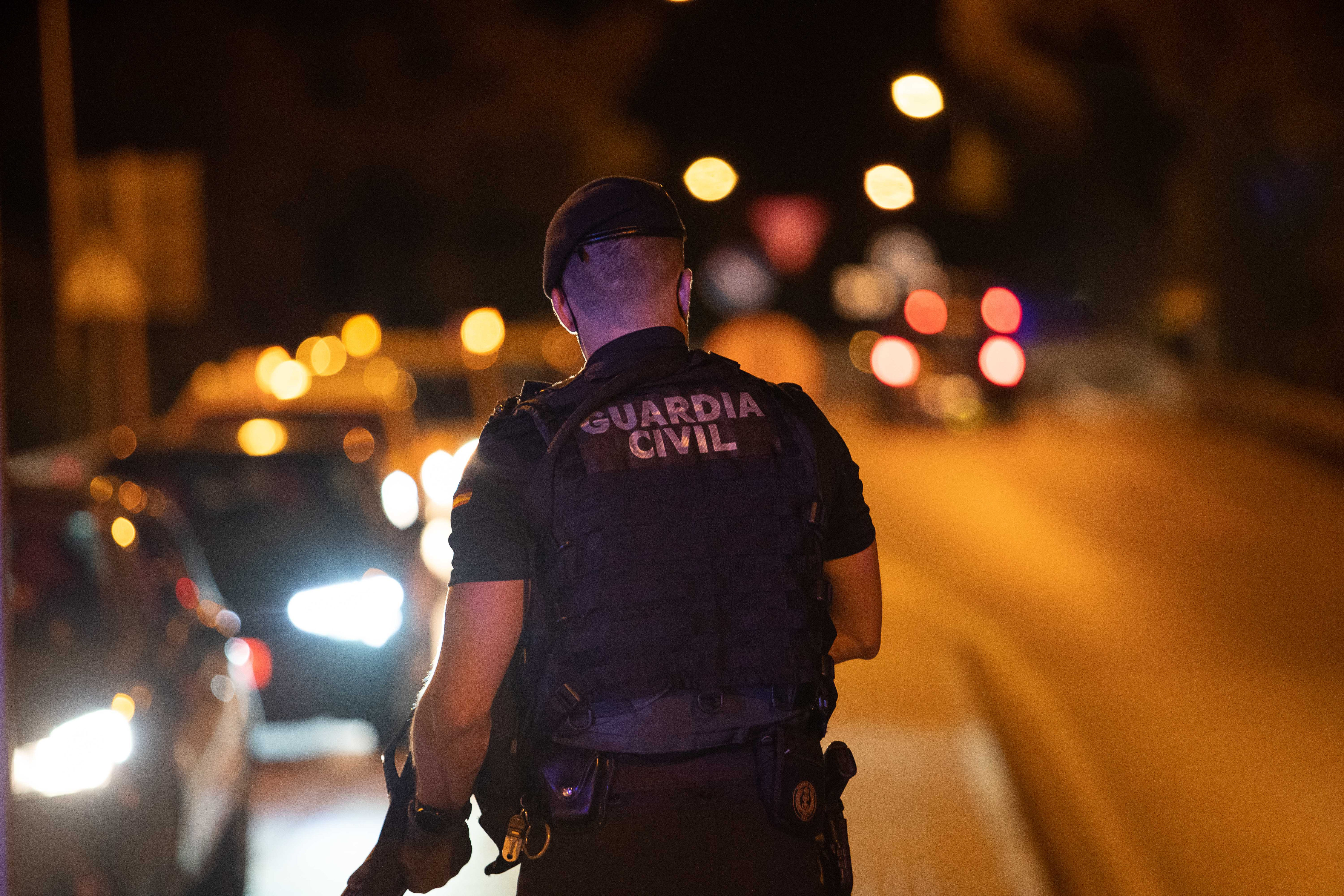 Hundreds of Brits jetted off to Majorca on Thursday after Downing Street added it to the green list.

Just 24 hours earlier, hordes of UK sun-seekers flocked to the Balearic Islands after it was added to the list.

Scores of scantly-clad Brits partied along Punta Bellena despite the heavy police presence.

There were hen parties, drunken cheering, and people lining up at take-away huts as they enjoyed the warm weather.

And today another 94 flights were due to carry tourists between the UK and the island’s Palma Airport.

Seven out of ten hotels in Majorca are now open, with 34 per cent of them setting up in the last few days after Downing Street’s green list announcement.

Bars and clubs in Punta Ballena were shut down last July on the orders of regional governors after British holiday yobs were filmed jumping up and down on the roof of a parked car.

Nightclubs in the area, and across the Balearics, are yet to re-open and bars have to close at 2am.

Tommy Goodwin, 35, from Stockport, the day manager of Mr Miyagi’s and TigerTiger bars on the famous neon-lit strip said: “The Balearics going on the UK’s green light list is definitely going to have a positive effect on business. 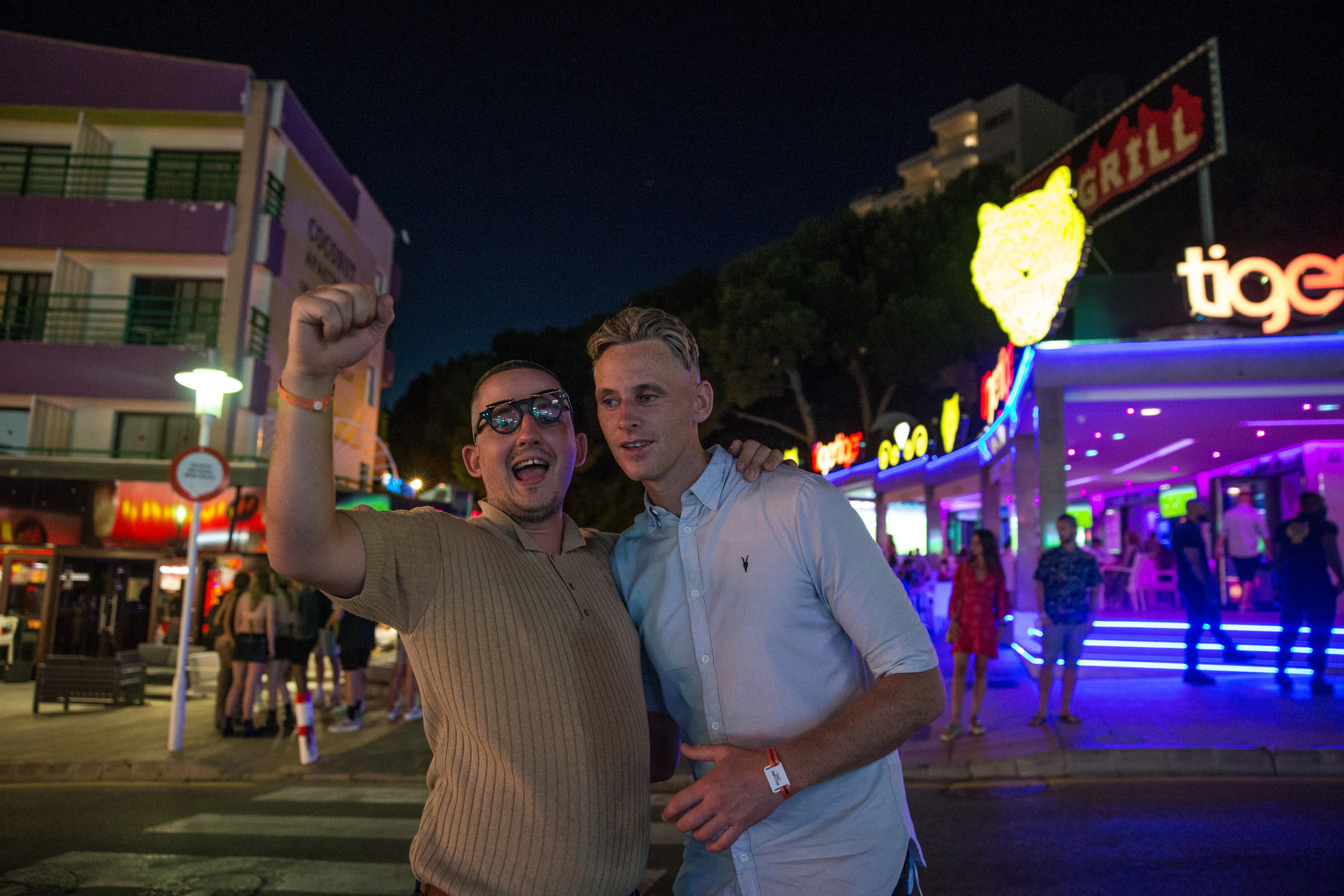 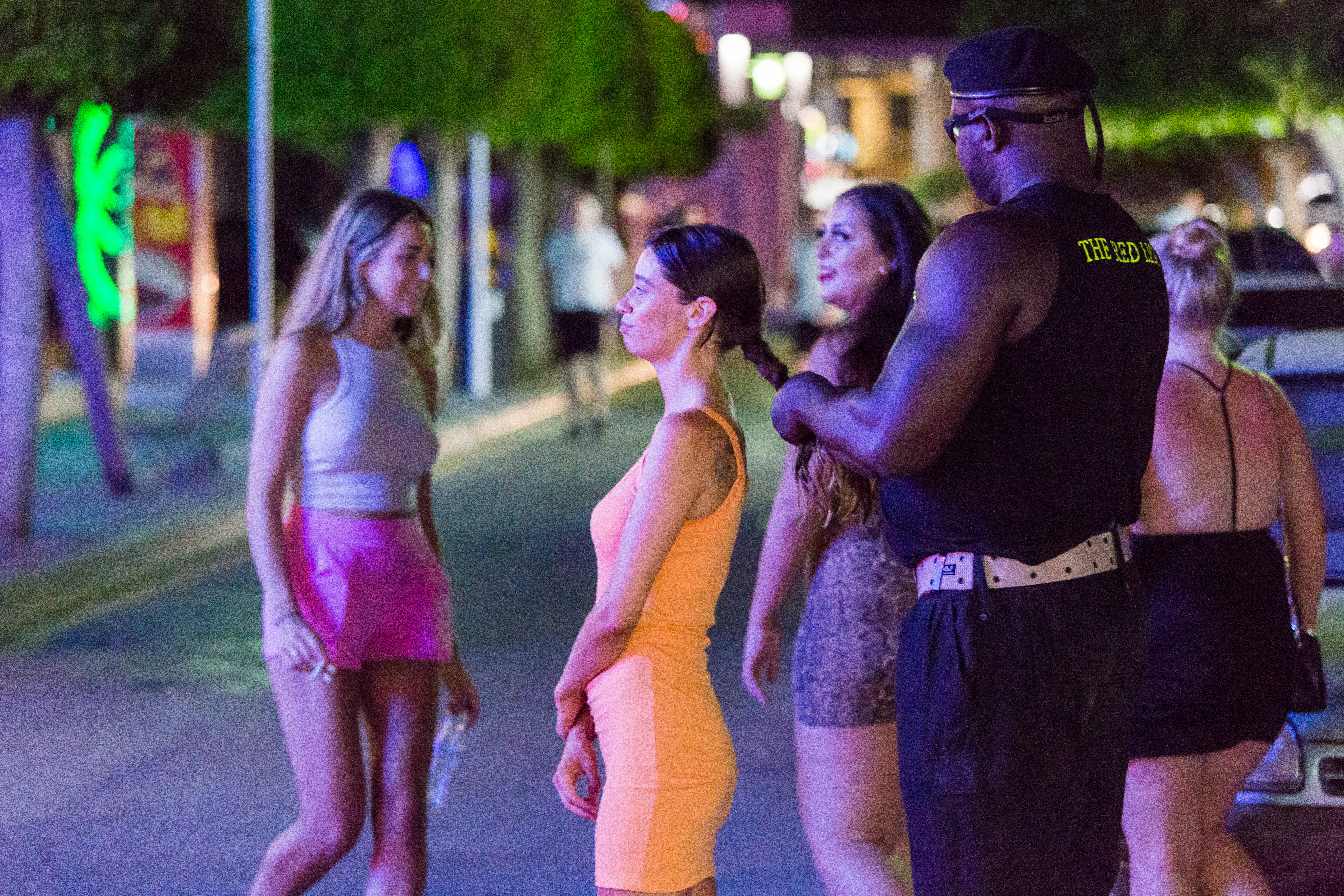 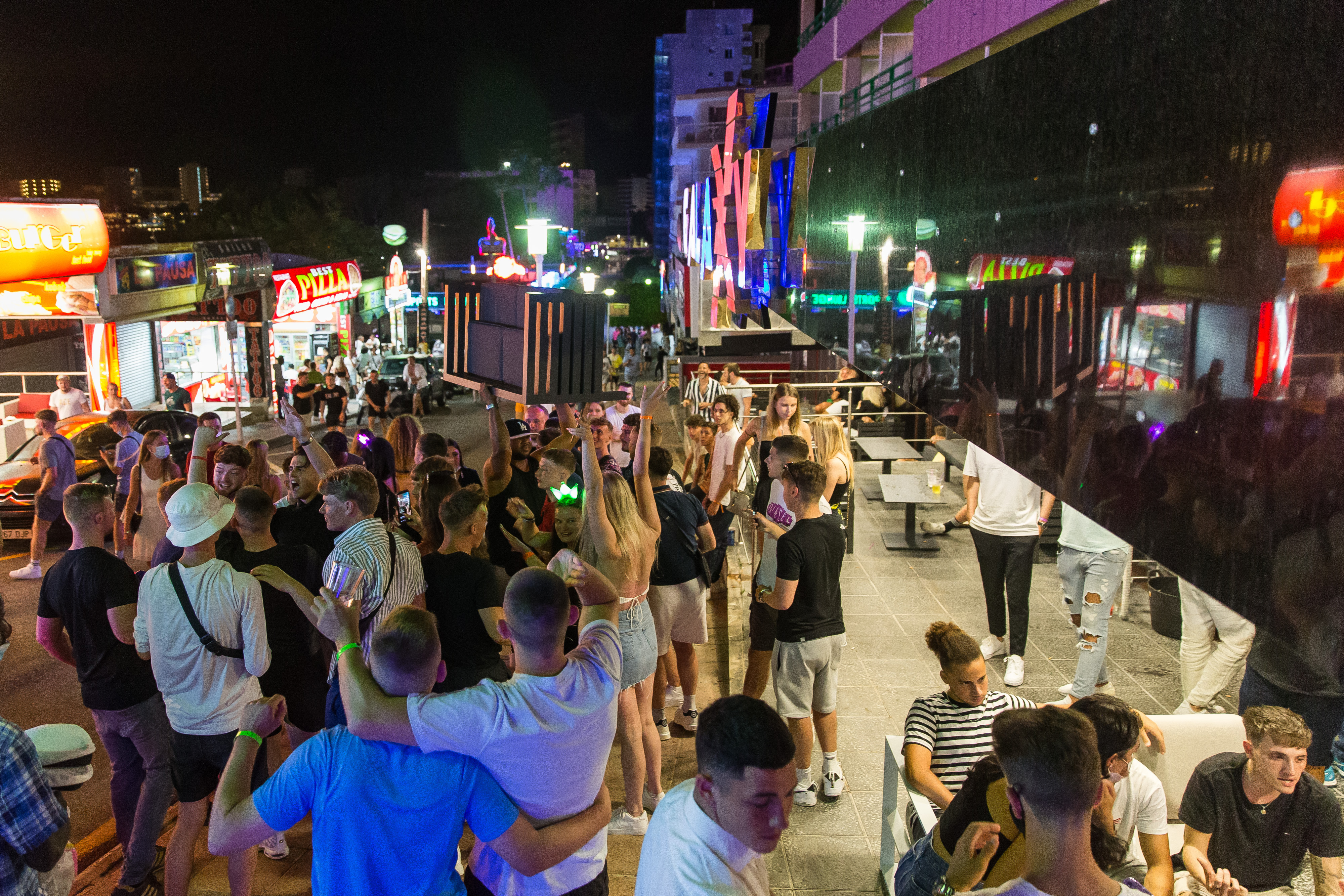 “We opened around eight weeks ago and it’s been a very different season so far.

“To be honest the customers have been a bit of a mixed bunch, many Scandinavians plus some French and Germans along with expat Brits who live and work in the resort.

“I think we’ll see a change in the next few weeks. I’m speaking to friends and acquaintances on social media who have booked for July and August and the start of September is traditionally a time when it's like someone has flicked a switch and hordes of Brits begin to arrive.

“I don’t think things will get back to the way they were this summer. Closing time is 2am and although we’ve got DJs in both bars, no standing is allowed. I've seen a lot of strange chair dancing and fist pumping recently.

Tommy said he can only have between 140 and 160 customers in his clubs at one time under new government regulations.

“This is the first year I’ve ever known of people reserving a table at weekends on Instagram and Facebook to come along and I’ve been in Magaluf eleven years."

This comes as ministers hint that double-jabbed Brits could travel from amber list countries without having to quarantine.

Boris Johnson has said "double jabs will be a liberator" when asked about reports that fully vaccinated people may be able to travel quarantine-free from amber list countries by July 26.

The tour operator Jet2 launched their first flight from Bristol Airport on Friday, with package holidays to the Balearics and Madeira operating from the airport for the first time.

Italy and France could join the green list before the end of the month, according to analysis by former British Airways strategy chief Robert Doyle, the Telegraph reports.

He claims to have cracked the formula the government uses to decide which countries go on the green list to make his prediction.

As well as the two Brit favourites other countries expected to be included are Austria, Bulgaria, Hungary, Romania, Poland, Norway, Vietnam, Denmark, Slovakia, North Macedonia and the Czech Republic.

Anyone coming back to Britain from a green list destination will need to have two Covid tests.

This includes a pre-arrival Covid test, and also a test on day two of returning to the UK.

Quarantine or additional testing is not needed upon return, unless the post-arrival test is positive.

The countries which have BANNED McDonald's restaurants – including four in Europe

Exclusive for MoS readers: Join Adam Frost on a voyage to Holland

Great British boltholes: A review of The Haughmond, Shropshire