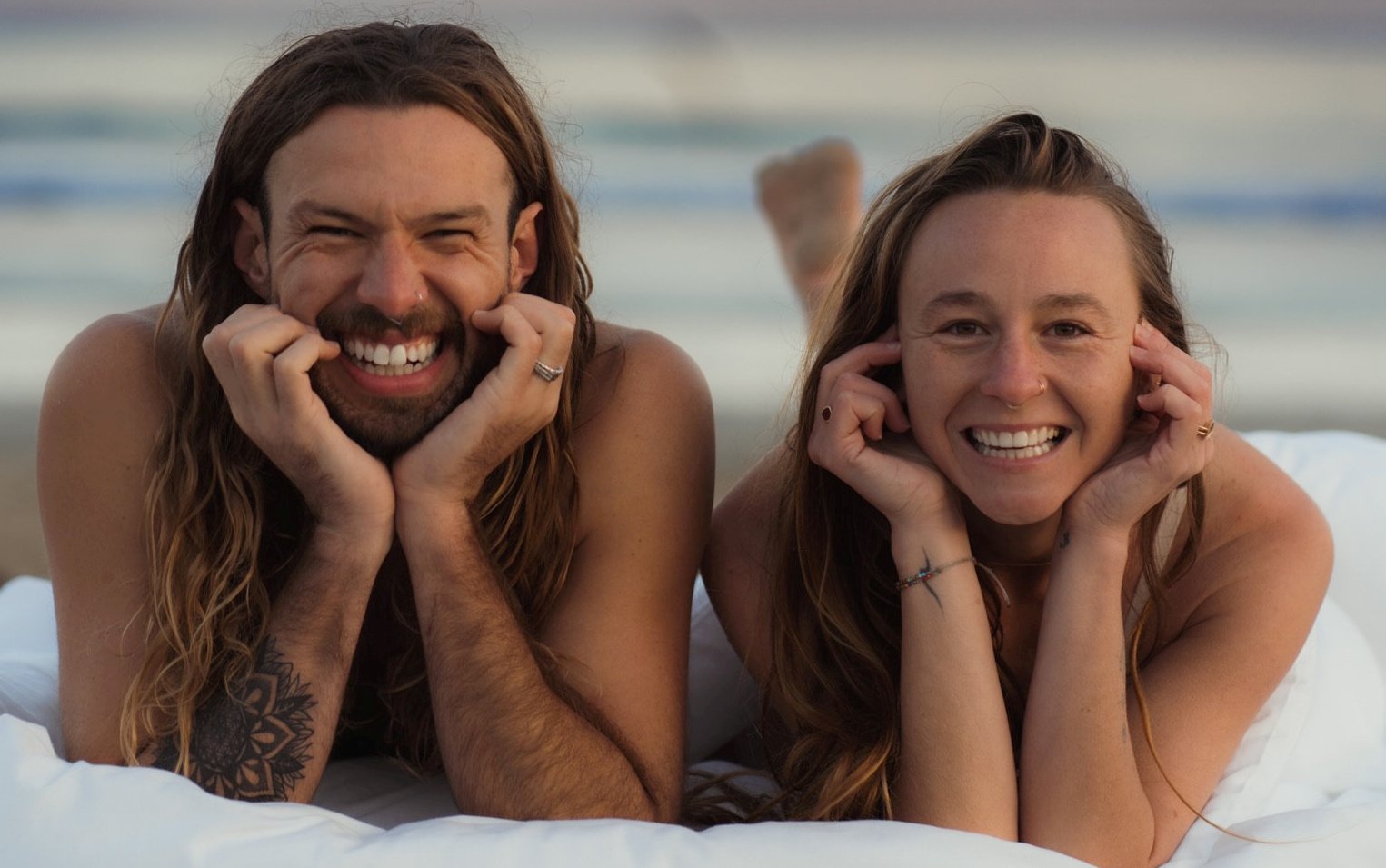 This couple are planning to make their honeymoon last a decade – all by living a budget lifestyle and earning money selling steamy naked photos online.

It was love at first sight, and after they got married on the Isle of Skye the following year, they decided to do embark on a ten-year honeymoon.

The plan to the extended trip came about as they wanted to top their adventurous wedding, which involved a 300-mile trek across Scotland.

They’ve already travelled to Iceland, Spain, and hitchhiked across the whole of Portugal, before three months in Sri Lanka, onto India, Nepal and then Thailand.

Kieran and Silke manage their travels on just £7 a day by staying in the cheapest option on Hostelworld and eating only street food.

This gives them leftover money from their £350-a-month income they earn from uploading nude artsy photographs to Patreon.

Subscribers pay £6 a week for seductive shots in breathtaking locations around the world, released each week on ‘Freaky Friday’.

The couple plan to continue their honeymoon for ten years in total, and their current plan is to travel from Chile to Alaska, as well as visiting Myanmar and Mongolia.

Silke said: ‘We get to know each other better by sharing these magical moments together on top of mountains and beneath waterfalls. Everyday is an adventure.

‘We lead such a beautiful life but we try to share the hard times too because it’s not always easy.

‘It’s amazing when hotels have us to stay for free but we love meeting new people from all over the world in hostels.

‘We go for the cheapest place on Hostelworld and they’re not always the nicest.’

After meeting in Spain, the pair embarked on their journey after just three months together.

Kieran, from Gervin, Scotland, proposed to Silke on top of the Quiriang on the Isle of Skye, while they were working as models for a wedding photographer in Scotland and surprised her by proposing on the shoot.

After a year travelling across Asia, the couple returned to Kieran’s hometown of Gervin to get married on August 30 2021, before a mammoth trek of the country and heading off on their mega honeymoon.

Speaking about the wedding, Kieran said: ‘We called it our “aisle” of Skye, it was incredible.

Silke added: ‘It was incredible for my family to be able to be there from Belgium especially since we had lived through so many restrictions.

‘My sister came all the way from Mexico and surprised after I hadn’t seen her for three years.’

However, Kieran said that he and Silke were so caught up in each other they ‘barely noticed the people around [them].’

The travelling duo started their adventure with five days in Iceland followed by a month in north Spain.

They then hitchhiked across Portugal for a month and spent three months in Sri Lanka before the crisis hit, where they made money working in a tuk tuk.

From Sri Lanka they went to India for a month and then on to Nepal, where they hiked through the Himalayas, taking in breathtaking mountain views.

The travelling lifestyle isn’t always as glamorous as it seems on Instagram, as the couple recall spending 17 hours on a jam-packed train from India to Nepal.

‘We couldn’t sit down for 17 hours as we were in general class and couldn’t get a sleeper,’ said Kieran.

‘It was crazy. Our feet were on top of each other there was literally no space to move.’

The couple are now spending six months in Thailand, continuing to stick to a tight budget of £7 a day.

They often get put up in hotels by doing sponsored posts on Instagram, but if not, they stay in basic hostels.

Silke and Kieran are strict on themselves and budget for every aspect of their life, skipping on luxuries and gourmet meals, instead going for street food or whatever they can afford.

To top up their £350 monthly Patreon income, the pair play music in local venues, with Silke singing and Kieran playing guitar.

Kieran said: ‘We came up with the idea of Freaky Friday because we want to spread body positivity and are both very comfortable in our skin.

‘We are living an amazing life, but we don’t think a lot of people would be able to live how we do.’

Before meeting Silke, the Scot had never stayed in a hostel or travelled.

He added: ‘We are now living in our dream and want to inspire others to catch the travelling bug.’