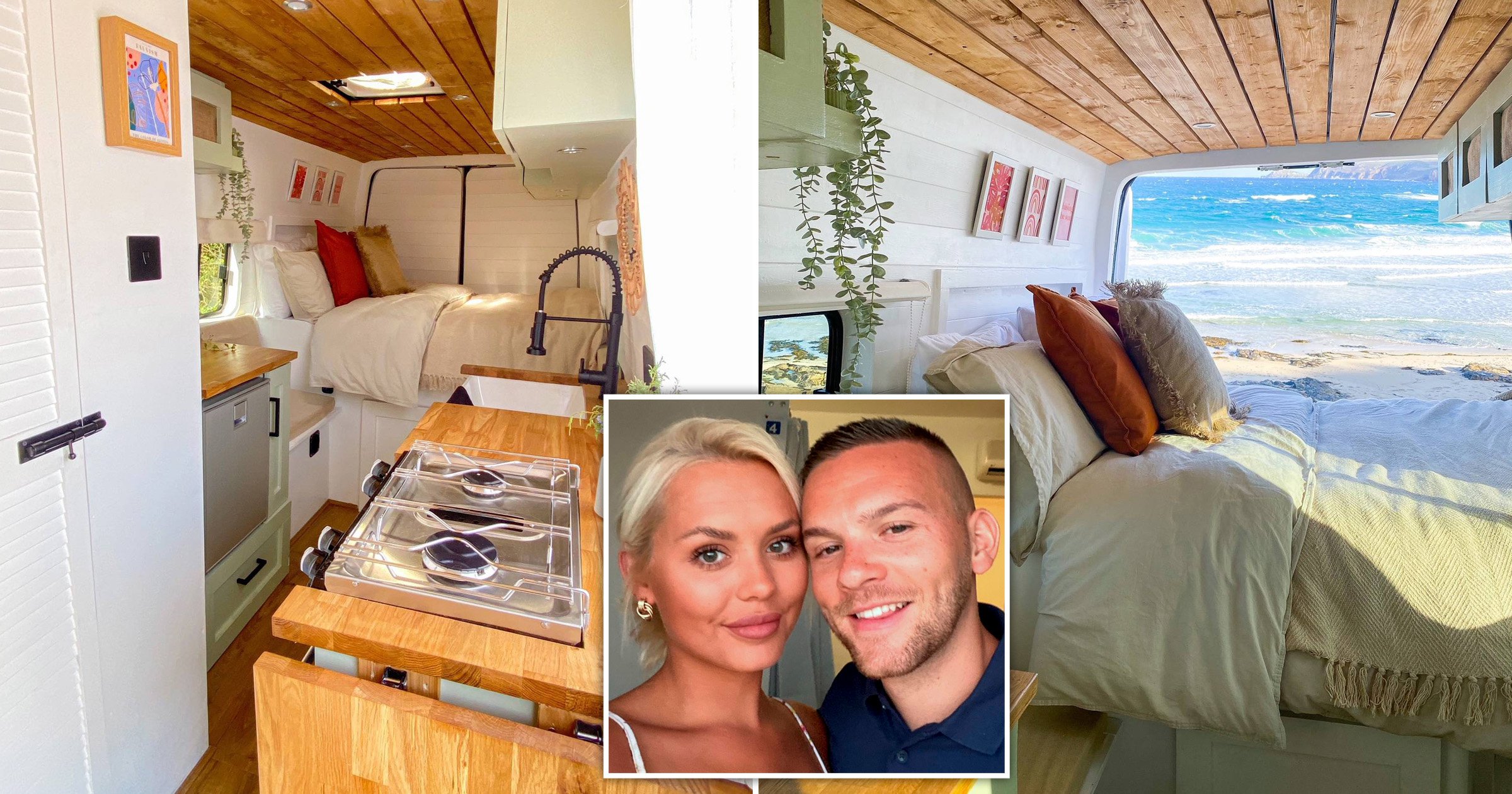 Olivia Dickets and Adam Healy were forced to end their round-the-world trip early when the pandemic hit.

After the devastating blow, the couple were determined to have more control over their future travel plans – so in January 2021, they purchased a run-down mobile home for £5,000.

Over the past few months they’ve worked hard to transform the derelict van into their dream living space and have kitted it out for upcoming trips – spending just £10,000 on the entire renovation.

Now, the vehicle not only has functional elements – such as a cooking space and bedroom – but impressive design features, including a large side window.

Olivia, 24, says: ‘We wanted the van so we could travel freely.

‘Nothing beats waking up next to a beautiful beach or mountains and being the first ones to see the view that morning while drinking a cup of coffee snuggled up in bed.’

The pair say they’ve always been good with money and that, split between two people, the total cost of the project doesn’t feel like a huge hit to their savings.

Olivia, from West Yorkshire adds: ‘Overall we probably spent £10,000 on everything, the van, insulation, windows, vents and decoration.

‘We didn’t have to save much because between two people £5,000 each isn’t too much. But it did feel like it ate away at our wages now and again especially being in and out of work.

‘We are quite sensible at saving anyway, though. We backpacked for 16 months a couple of years ago so we know how to be stringent with our money if we have to.’

Ex-receptionist Olivia says: ‘Before buying the van we watched loads of YouTube videos of other regular people, who didn’t necessarily have a trade or skill, but managed to convert a van into gorgeous homes on wheels.

‘We watched various step-by-step tutorials, taking inspiration, yet adding our own style and requirements into the build.

‘I think the end result has exceeded even our own expectations of what we thought we were capable of.

‘I feel proud of us. The first few weeks I didn’t even know how to use a screwdriver and by the end of it I was making shelves and cupboards.’

The pair also think it’s well-worth the investment, as they don’t want to buy a property anytime soon.

‘We’ve never been interested in getting a mortgage or buying expensive things on finance,’ adds Olivia.

‘The van is our only home, I think we’ll probably keep it that way for now.’