On March 23, 2020, as the coronavirus pandemic canceled flights and states were going under lockdown, First Officer Chris Dennis parked a Delta Air Lines aircraft in Victorville, California, in a desert lot.

Before he left the flight deck, Dennis wrote a note to the next pilot of the plane and put it in the tray table. That note wasn’t seen again for 435 days, when First Officer Nick Perez found it earlier this month, according to Delta.

“Hey pilots — It’s March 23rd and we just arrived from MSP,” Dennis wrote in his 2020 note. “Very chilling to see so much of our fleet here in the desert.” 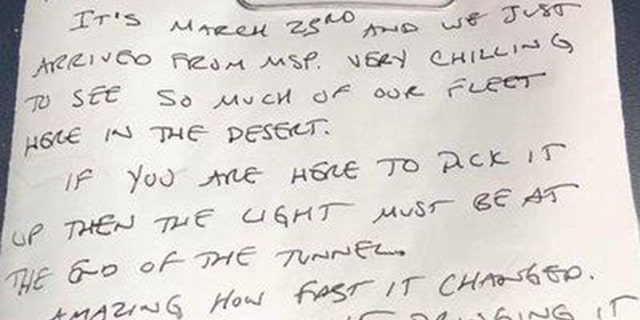 First Officer Chris Dennis left this note on a Delta airplane on March 23, 2020, as he was parking it for storage at the beginning of the pandemic. (Courtesy of Delta Air Lines)

“If you are here to pick it up then the light must be at the end of the tunnel,” he added. “Amazing how fast it changed. Have a safe flight bringing it out of storage!”

Dennis told Delta that the severity of the situation hit him as the plane landed.

“As we crossed the runway: Delta aircraft. It’s hard to fathom how many aircraft Delta has until you see that many of them parked in one place,” Dennis said.

“When we got in line, it looked like an optical illusion. It just kept going and going,” he added. “I don’t know how to describe it — it was shocking.”

At the time, Dennis thought the plane would only be stored there for 14 days. Yet, even for that amount of time, the impact on the airline industry was not lost on him.

“I thought about how many people’s jobs rely on just one of those airplanes,” Dennis said. “From the Reservations agent, to the ticket agent, to the pilot, flight attendants, mechanics, the ramp crew. Then you go a level deeper: the rental car agency, the hotels, the tourism companies.”

The same day he wrote the note and left the plane in the lot, Dennis posted on Facebook about dropping off the plane, saying it was a “chilling, apocalyptic, surreal” day.

“While we are all under 14-day quarantine and are sick of looking at our ceilings and walls, this is what is happening to the airline industry and other industries out there,” Dennis wrote, in part, on Facebook. “It is horrifying. Please stay inside, social distance, and let this blow over quickly.”

Little did Dennis know, it would be much longer than 14 days before the plane he dropped off would return to service.

According to Delta, Dennis’ No. 3009 was the last A321 aircraft that was parked in the Victorville lot when Perez arrived on June 1 to prepare it to return to service.

During its time in storage, 3009 had lent more than 120 parts to other aircraft, so mechanics had spent weeks preparing it and other aircraft to get back to the skies. 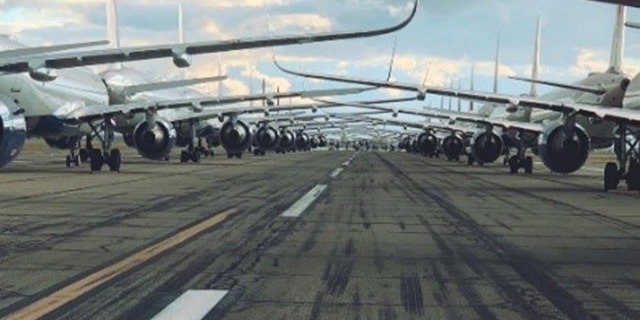 Planes parked for storage are pictured at the Victorville, California, lot. (Courtesy of Delta Air Lines)

When Perez arrived, he and the rest of the team bringing the plane back to service had to go through pages of preflight verification.

While they prepared the plane, Perez spoke with mechanic Tom Trenda, who had been working on 3009.

“He had to have been thinking he was leaving his job,” Perez said. “Back in March, I was 100% certain I was going to lose my job.”

“I kept thinking about my mindset now compared to his when he left this note,” Perez added. “[Back then], we were getting good at landing empty airplanes, now we’re going in the right direction. I’m in good spirits. I’m very optimistic. I feel like how I felt in 2017 again – ready to get going.”

Dennis also said he feels optimistic about the future.

“As they get into that airplane, they are going to see the opposite view than I saw,” Dennis said. “There’s going to be an open runway in front of them.”