Walt Disney World Resort shared an update on its Star Wars: Galactic Starcruiser on May 4.

Before the coronavirus pandemic, the immersive hotel was scheduled to open in 2021. But now, fans can expect the Galactic Starcruiser to open sometime next year, according to a news release from Disney Parks Blogs.

With the update, which just so happened to fall in line with National Star Wars Day, Disney Parks revealed that Galactic Starcruiser guests who book a stay for its 2022 debut will get an exclusive preview of a new lightsaber. 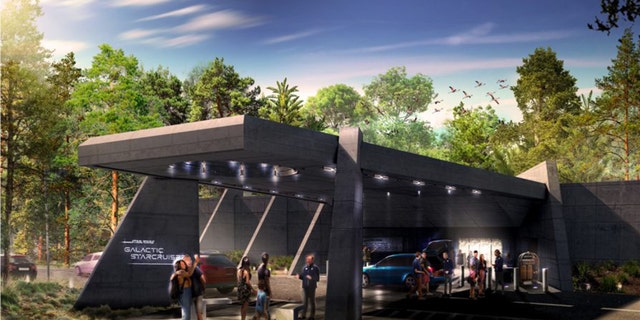 <strong>In a galaxy not so far, far away, Walt Disney World plans to open the "Star Wars: Galactic Starcruiser" hotel attraction and a host of new amusements at the Orlando, Fla. theme park, pictured. (Disney)</strong>

The lightsaber is based on the laser sword that’s used by “The Rise of Skywalker” protagonist Rey, and was created by Walt Disney’s Imagineering Research and Development team. Unlike many other previous models, this new lightsaber is designed to extend by itself, according to a video Disney Parks released.

While other hotels in Walt Disney World Resort allow for extended stays, the Galactic Starcruiser will be a two-night “adventure” – meaning guests can only book a stay for two nights at a time.

The entire hotel is themed after the “Star Wars” universe, which was originally created by American film director George Lucas.

Disney Enterprises, Inc. and Lucasfilm Ltd. have both worked on the ambitious “vacation experience.”

An exact date for the Galactic Starcruiser’s opening has yet to be provided. Disney World’s website has a sign up page for fans who want additional news and updates. 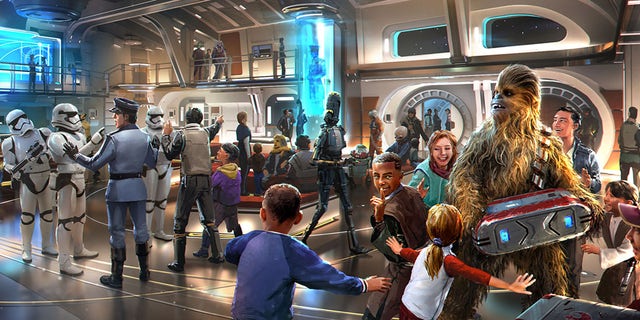 <strong>Artist rendering of the interior of the "Star Wars: Galactic Starcruiser," which is set to debut in Walt Disney World Resort in 2022. (Disney)</strong>

Walt Disney World Resort includes 33 on-property hotels. Twenty of these hotels are currently open and accepting new reservations while another four will be reopened in late spring and summer, according to the Disney Resort Hotels webpage.

The hotels that have yet to be reopened were shuttered after the first coronavirus lockdown order in March 2020.

“Certain parks, hotels, restaurants and other offerings may be modified or unavailable, limited in capacity and subject to limited availability or closure, and park admission and offerings are not guaranteed,” a notice on Disney World’s website reads as of Wednesday, May 5.