Follow
Home » Travel » For Georgian aesthetics with a touch of kitsch, this London hotel has it all

For Georgian aesthetics with a touch of kitsch, this London hotel has it all 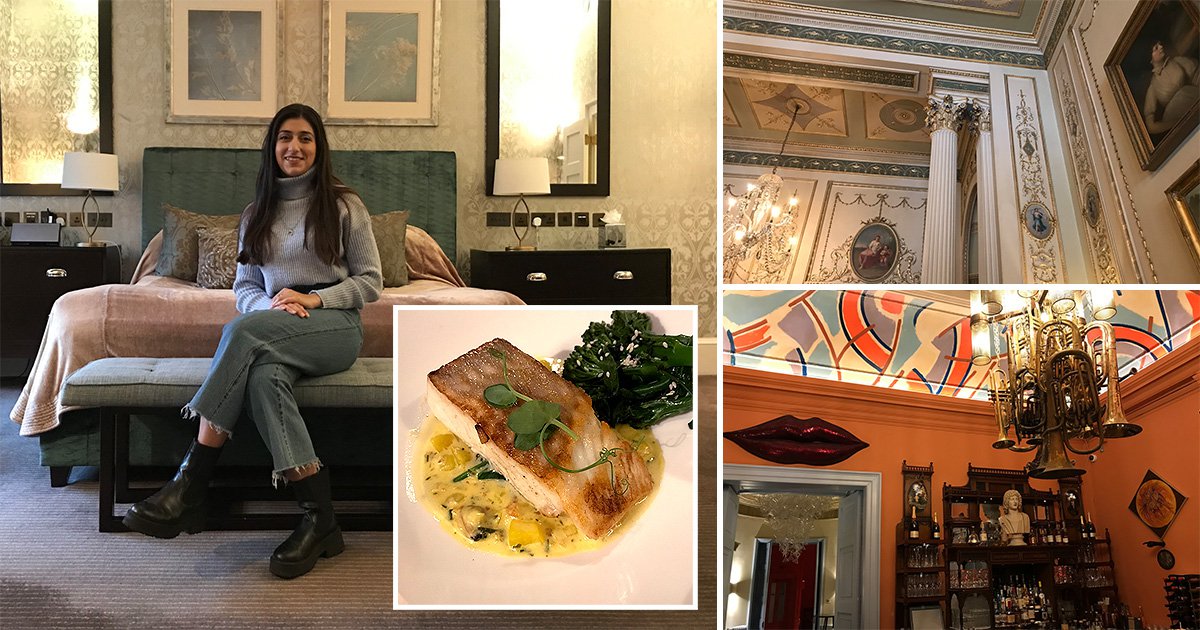 Indecisive folk can have it all at Home House, the members club-cum-hotel that’s just a short walk from London’s Bond Street.

Central and open to anyone to book despite the membership offering (though, prices are higher if you’re not a regular), a night of luxury in the heart of the capital is yours for the taking.

Home House isn’t easy to find. Simply marked numbers 20 and 21 outside, you’re relying on Google Maps to get you to the right door on Portman Square, before tentatively pushing it open for fear you’ve got the wrong place.

This adds to its secret members club feel, as does the slightly dimmed lighting.

Visually, Home House is a lot to take in – bars, rooms, restaurants and interiors at number 20 are Georgian themed, giving the ultimate regalcore vibes. Number 21 on the other hand, the second half of the complex, is garish, kitsch, and vibrant.

For the best of both worlds, there isn’t much else that comes close to this peculiar, yet spectacular set up.

Fusing ’18th century splendour with 21st century style’ is what they call it, and when we went to stay overnight and review all the venue has to offer, this is true of what we found.

Established in the 18th century, Home House was designed by George III’s architect, James Wyatt. The brief was to ‘build a sophisticated palace purely for enjoyment and entertainment’ – that is still very much the nature of the game today in 2021.

Upon arrival, we were shown to the George Hanbury Suite – our luxurious abode for the night.

Impressive on first sight, it features a living area with a TV, (comfy) double bed, walk in wardrobe, dressing area, and large bathroom.

It had all we could need – except milk to go with the coffee machine, but I can look past this.

Every suite has its own distinct colour scheme and arrangement, and our soft duck egg blue with grey was both calming and exciting to take in as we sipped on welcome champagne.

The bathroom was equipped with two sinks, making getting ready as a pair all the more convenient, and had a range of Penhaligon’s products to use.

Located on the side of a busy road, we were pleasantly surprised by how quiet the room was. Usually in central London what you get in location you sacrifice in outside chatter and car horns.

While we thought this meant we’d get a perfect night’s sleep, we were kept up by the downstairs club though, which seemed to teeter off between 2am and 3am. More on that later.

Before dinner, we decided to check out the spa area. Calling it a spa might be a stretch, given there aren’t treatments available or a pool, but there is a sauna, steam room and room in which to cool down, neighbouring a gym.

The sauna and steam room were relaxing after a day of running around town.

Free for all overnight guests to access, you’ll need to hop into the vintage lift to go to the basement.

This little lift was a real highlight in the experience. Built with sliding cage-like doors, it felt as though we’d made a quick stop in the 1920s.

Tip: make sure you close the cages behind you after getting out the lift as they aren’t able to click into place on their own, and the lift won’t move.

After showering up in the lusciously bathroom, it was time to head to dinner.

Home House has plenty of restaurants and bars to dine in, so the choice is yours.

We opted for the fine dining restaurant at number 20 to continue experiencing the grandeur.

While we felt the menu was a little basic on first glance for ‘fine dining’ (with options such as fish and chips), it’s fair to say that food arrived looking particularly fine with portions at once filling and refined.

The wine and cocktails on offer are also delicious – and it’s fair to say we ate and drank like kings.

Another tip: ensure you book your table ahead of dining, as you may run into a lack of space as we first did.

On our way to dinner we bumped into a man who, I think, introduced himself as Toff. It may have been Tom, but through his thick posh London boy accent, I really couldn’t tell.

Perhaps that mishearing says more about my perception of the clientelle than anything else, though the crowd was a little more wide-ranging than this.

Expect to see plenty of middle class people between their 20s and 40s, alongside people on holiday from other parts of Europe, looking to splash their cash.

When in London, why not?

Anyway, it was time to hit the bars and see what Home House offers in the way of nightlife.

While you’re situated just a stone’s throw away from Soho, Home House has a way of keeping you inside.

It does feel like you’re part of a club, even if you’re a fleeting one-off guest.

Both numbers 20 and 21 had lively options, though 21 seemed to pick up more as the night went on.

Colours went from dialled down blues to vibrant lit-up reds with pop art and art deco style designs on the walls.

One thing that is consistent among the ever-changing settings: it’s always stylish.

There’s a bar dedicated to cocktails, but you can get pretty much anything you want wherever you go.

Wondering around and sitting in the various settings is partly why, with only one night in the hotel, it feels as though there’s much to see, do and entertain yourself with.

Come closer to midnight and House 21 becomes a ‘club’, though we would describe it as being more of a cool house party, like the kind you see in American films split on different floors.

Though a DJ is set up in one downstairs bar, all the others get hooked up so you can move floor to floor, still dancing to the music.

Furniture can get in the way of this, but easy-to-listen-to music and an ‘up for it’ crowd make this a fun way to spend the small hours.

Before we knew it, it was the next day and our experience was coming to an end.

But not without breakfast, which is included in overnight bookings.

Like dinner, there are options for where to dine, but one of the main restaurants was closed for a private event. This left us with the drawing rooms, which are stunning and will make you feel like a cast member of Downton Abbey.

Though beautiful to sit in – you could spend ages marvelling at the walls and ceilings – it was a little awkward to eat a fry up on our laps given the tables in the drawing rooms are more like coffee tables in terms of their height.

As my friend said, it felt at odds to be eating in that way given the overall setting.

After a spot of shopping on Oxford Street, it was time for our final part of the trip.

Back in the drawing rooms with renewed appetites, we had afternoon tea waiting.

A classic tea, comprised of delicate sandwiches, warm scones and sweet treats, we enjoyed this add-on, which would cost an extra £35.

The smoked salmon sandwiches with nutty bread were our favourite part after the scones.

All in all, a stay at Home House is a costly but entirely memorable and special experience.

Whether you’re celebrating an anniversary or treating yourself to a weekend in the capital over Christmas, there’s certainly joy to be found – if not only in how much you’ll be taken by the Georgian interiors.

Other things to note are they’re pet-friendly as we saw plenty of dogs along the hallways, there’s subsidised parking available for guests, and the staff seem to make an effort to remember your order.

It’s a personal touch that makes you feel as though you’re part of the club, even if you’re just visiting for a night.

Overnight stays at Home House cost more for non-members, with non-member prices starting from £389, depending on your room type. Suites start from £676.