Hail Hydra… the ultimate Greek island: Inside a car-free paradise

Hail Hydra… the ultimate Greek paradise: Inside the dreamy island where cars (and mopeds) are banned – and it’s just 90 minutes from Athens by ferry

Hydra – it’s the Greece you’ve been dreaming of.

Car free? You read that right. In fact, all wheeled vehicles are banned – including mopeds – though there are dustbin lorries and emergency vehicles. 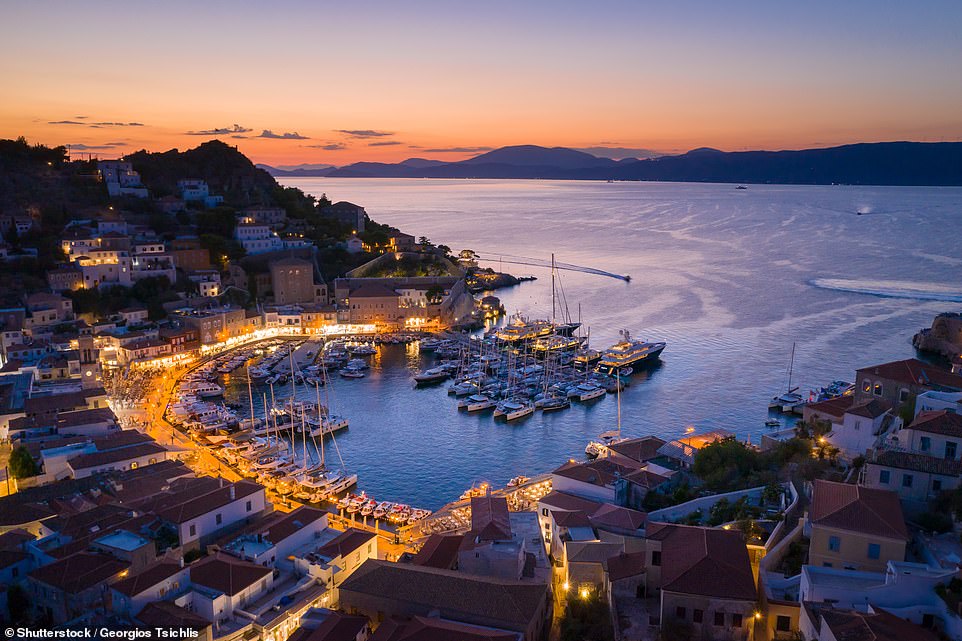 Hydra is the Greece you’ve been dreaming of, writes Ted Thornhill, who reveals that he fell in love with the island immediately. The picture above shows the only sizeable settlement on the island – Hydra Port 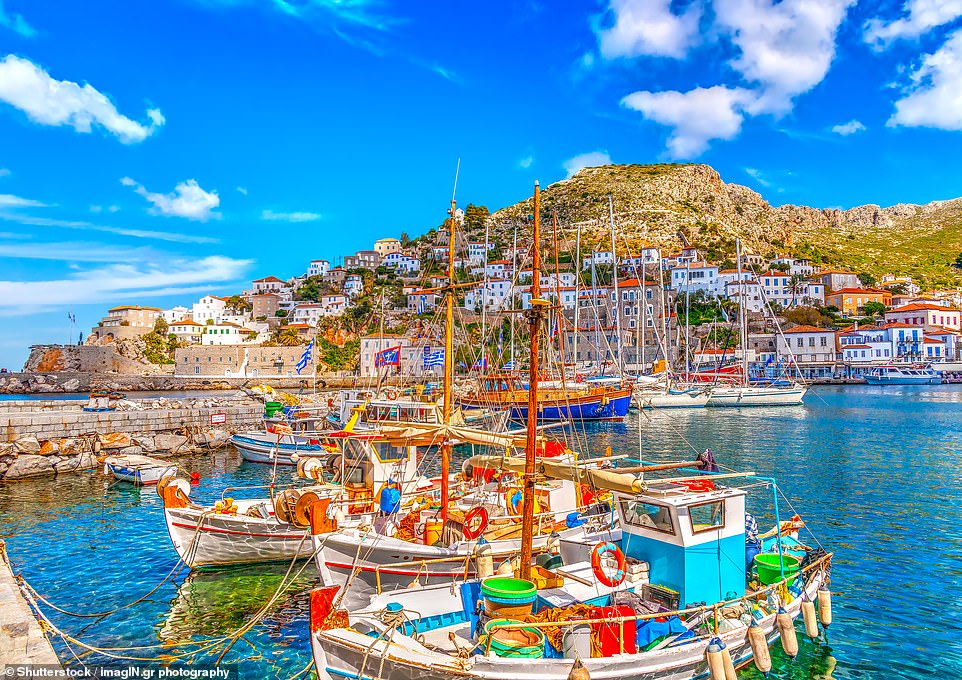 ‘The horseshoe-shaped harbour is gorgeous,’ writes Ted, ‘the water packed with a mixture of cute fishing boats, speedboats, yachts and superyachts, while the bustling quayside ringing it brims with tavernas and chic boutique shops’ 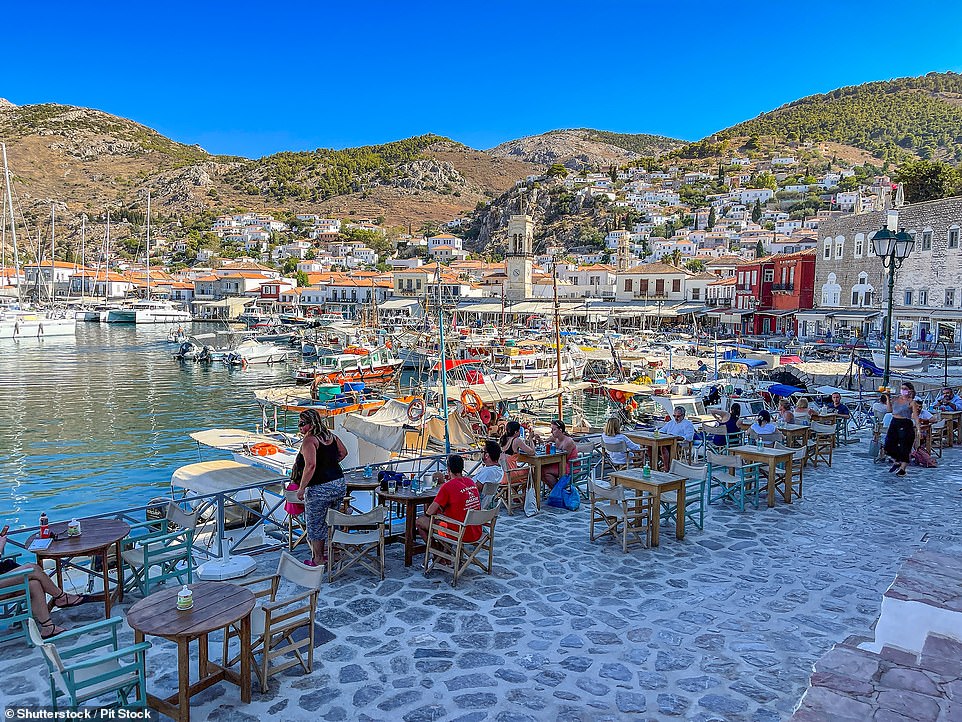 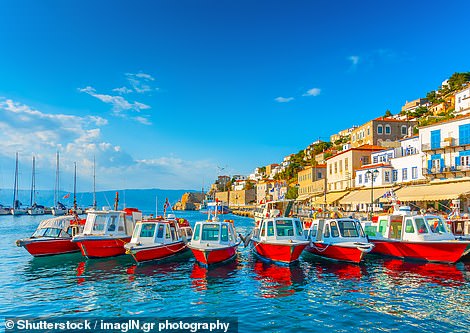 I stay for seven nights with my partner and five-year-old daughter, but know within moments of disembarking in Hydra port, the main town, from a high-speed catamaran ferry from the Greek capital – which reaches the island in 90 minutes – that we’d be returning.

The horseshoe-shaped harbour is gorgeous, the water packed with a mixture of cute fishing boats, speedboats, yachts and superyachts, while the bustling quayside ringing it brims with tavernas and chic boutique shops, with mules used to transport luggage and goods around the island stationed in one corner near where the ferries dock.

Further back, climbing the surrounding hills, are well-kept pastel-hued houses, hotels and yet more tavernas linked by a tangle of alleyways so labyrinthine military-grade laser surveying equipment was surely deployed to map it. 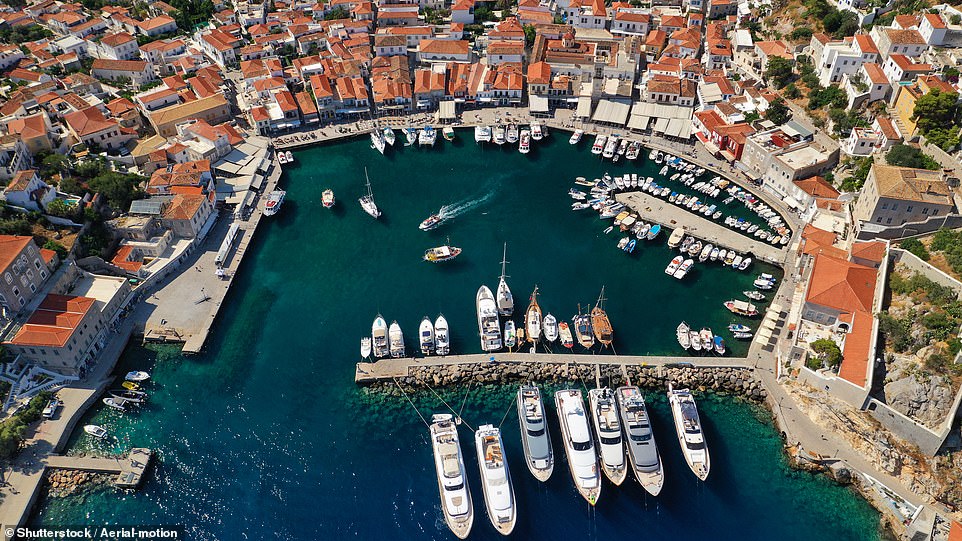 If there were Greek island Top Trumps, says Ted, this 12-mile-long (20km) Saronic Gulf honeypot would be nigh-on unbeatable 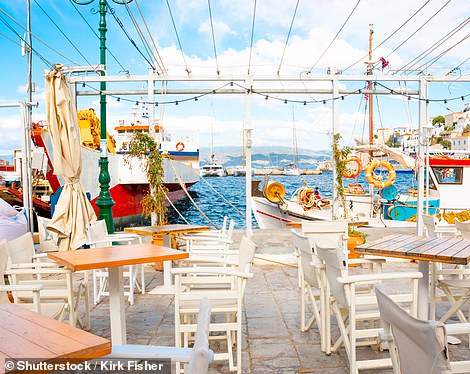 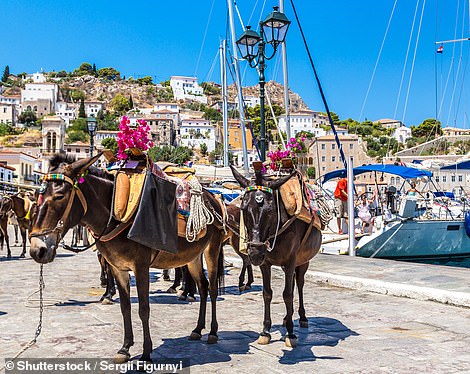 All wheeled vehicles are banned on Hydra – including mopeds – though there are dustbin lorries and emergency vehicles. Mules (right) are used to transport luggage and goods around the island

A joyous place to get lost in, with a picture-postcard scene waiting around every corner.

And there’s a sublime swimming spot waiting around every corner of the coastline.

The waters are bathwater warm, sometimes teeming with fish, and crystal clear thanks to rocky seabeds. Each day it’s a case of wake up in the hotel, leave, dive, repeat.

The only delay to this blood-pressure-dissipating sun-drenched routine is the occasional strategy meeting about which inlet or cove to explore over a waterside coffee in the harbour, amid a mixture of Parisians in designer summerwear, rough-hewn sailors and eager day-trippers. 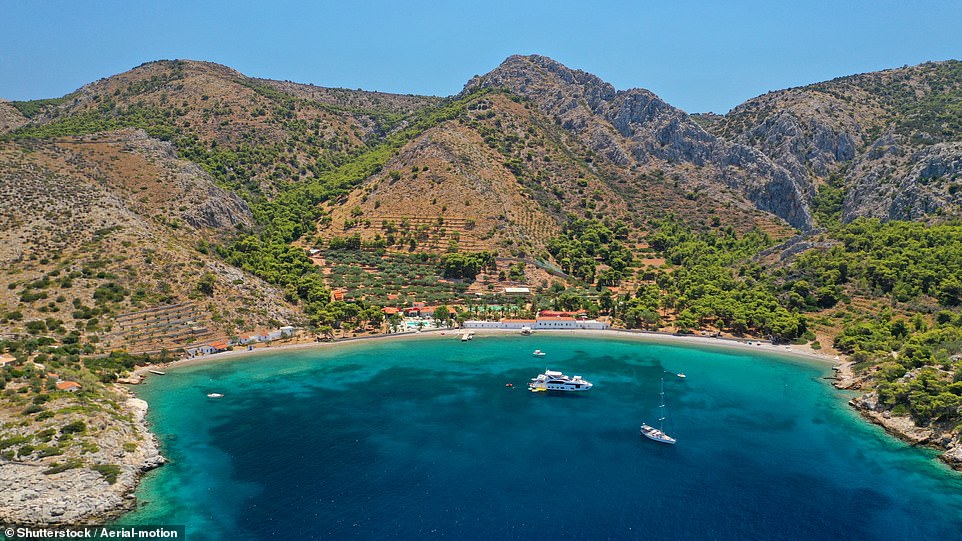 ‘There’s a sublime swimming spot waiting around every corner of the coastline,’ writes Ted. Pictured above is picturesque Molos Beach 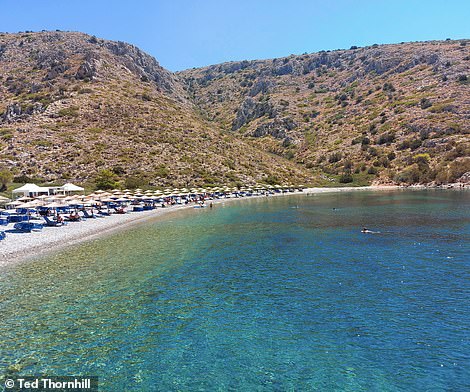 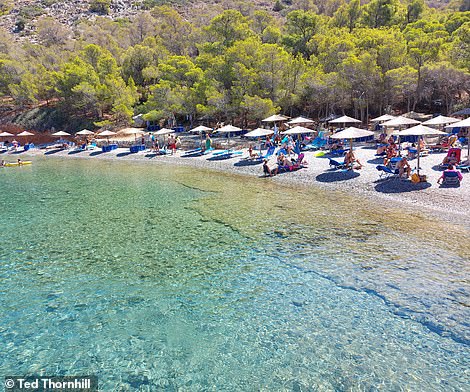 LEFT: The remote Paralia Agios Nikolaos beach, which lies in a bay on the practically uninhabited south side of the island. Here there’s no natural shade, but there are well-organised sun loungers with umbrellas and a cafe with shaded seating. RIGHT: A picture of Bisti Beach that Ted took from the deck of an island-tour boat

A popular spot for a swim is actually right by the harbour entrance, where concrete platforms have been built into the rock face, with metal steps leading into the water.

Daredevils delight in throwing themselves off some of the adjacent sweaty-palm-inducing rocky pinnacles.

There are several beaches further out easily reachable by foot along undulating stone-paved roads that occasionally bisect cliffside al fresco taverna tables (highly recommended Vlychos Beach, for instance), but the best – and most thrilling – mode of transport is a zippy water taxi speedboat from the harbour, one of the free boat shuttles laid on by the resorts or one of the bigger double-decker communal ferry boats. 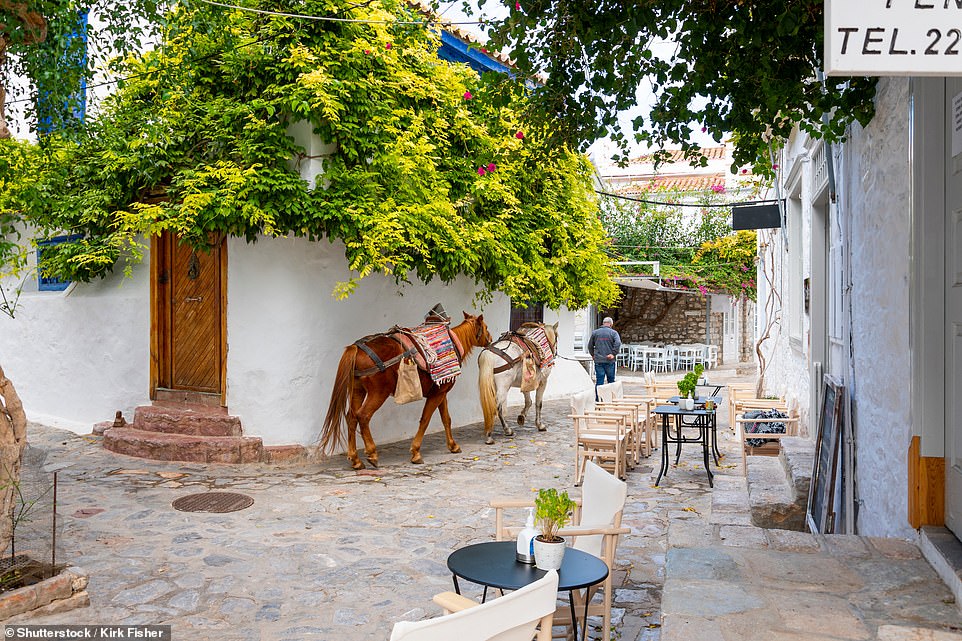 Hydra Port, enthuses Ted, is ‘a joyous place to get lost in, with a picture-postcard scene waiting around every corner’ 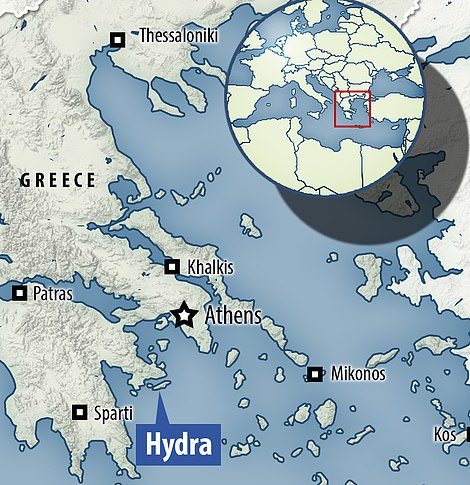 Hydra is just 90 minutes from Athens by ferry

We take the latter to the remote Paralia Agios Nikolaos beach, which lies in a bay on the practically uninhabited south side of the island.

There’s no natural shade, but amazingly, despite its isolation, there are well-organised sun loungers with umbrellas and a cafe with shaded seating serving all manner of refreshments, from salads to bottles of rose.

The water here is calm and soothing, in contrast to the rugged sun-scorched surroundings.

We also boat it to the excellent Mandraki Beach Resort to the east, the only sandy beach on the island and one with a gently sloping seabed that’s perfect for youngsters, deluxe sun loungers, fresh-water showers, an oversized wooden swing and a good restaurant.

The best watery experience by far, though, is an all-day cruise (with lunch) around the island (www.gnghydracruises.gr), with stop-offs in magical sea caves, hard-to-reach idyllic coves and a sensational double-sided beach. And bonus – the captain is the jolliest of coves.

Another memorable activity is a superb guided horse ride from the town to a hillside monastery with inimitable British-Greek local Harriet Jarman, who walks with our highly composed daughter and her horse at the front while we parents fret at the back, worried – completely unnecessarily – that our nags might fall off the narrow hairpin-y roads we encounter at the start. 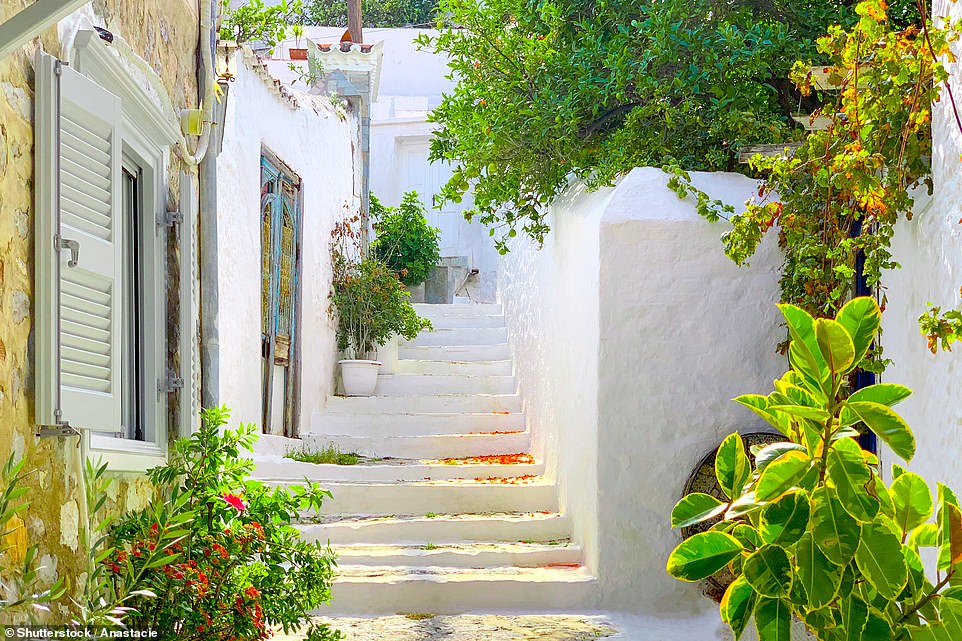 Hydra Port’s pastel-hued houses, hotels and tavernas are ‘linked by a tangle of alleyways so labyrinthine military-grade laser surveying equipment was surely deployed to map it’ 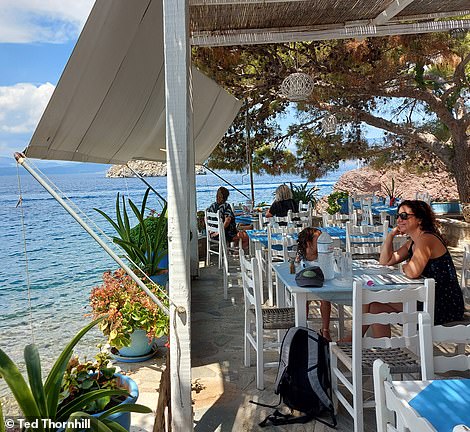 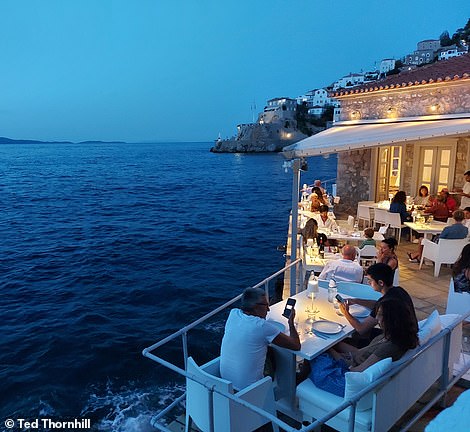 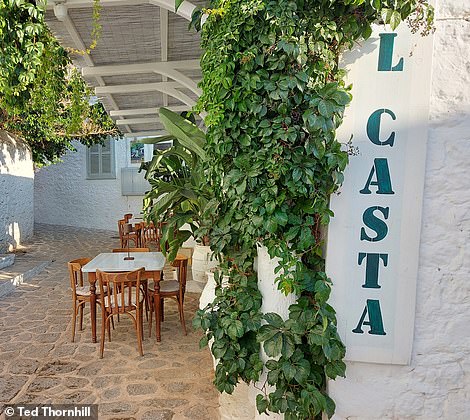 Eating our way around the island’s tavernas chews up some time, too. It’s almost impossible to pick a favourite. There’s the one by the harbour entrance that apparently The Beatles once visited (Omilos – very romantic, stunning views); the cute one tucked away in a square with an owner who wafts classical music into the night air (Pirofani); the one hidden in an alleyway offering Italian food just like an Italian grandmother makes it, along with interesting, carefully selected wine (Il Casta); the relaxing waterside one by Vlychos Beach (Taverna Marina) – and the quayside eateries, none of which are duds (Oraia Hydra, Yamas Hydra Souvlaki, Isalos, Tassos Café, The Pirate Bar and Papagalos).

If all of this sounds enticing but a bit like the template for any number of Greek islands, let’s circle back to the wheeled-vehicle-free bit. 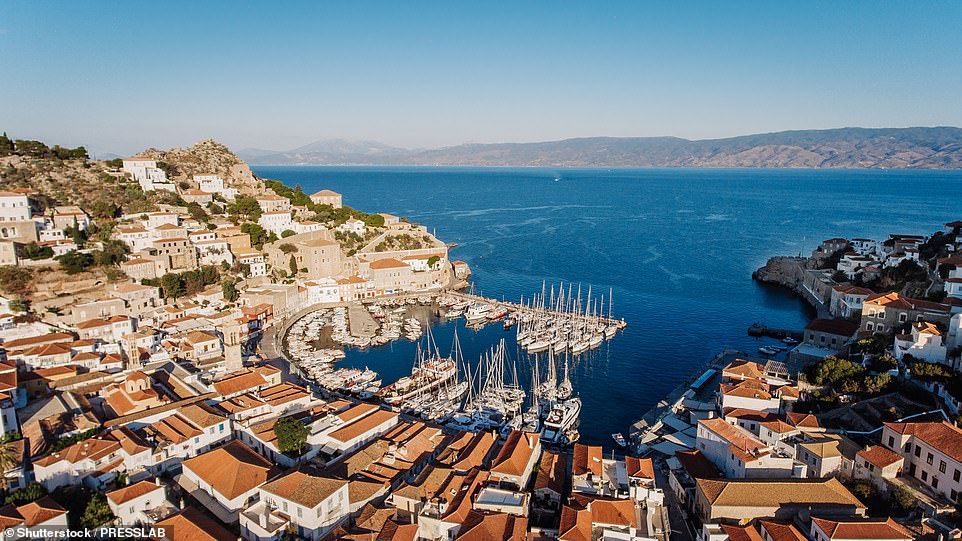 Ted declares: ‘Let’s raise a glass to the joys of an island to be treasured’

The absence of mopeds buzzing about like hornets and cars barging their way along pretty lanes generates a remarkably tranquil and carefree vibe.

Children can run free (just watch them near those pinnacles) and sounds that otherwise might be drowned out can clearly be heard – clinking coffee cups, clanking masts and the occasional cork popping from the deck of a superyacht.

Let’s raise a glass to the joys of an island to be treasured.

We stay at charming Phaedra Hotel, a few minutes’ walk from the harbour. Our spacious room has a living area, kitchenette, en-suite, mezzanine bedroom and air conditioning. Multilingual owner Hilda lays on magnificent breakfasts, served in the hotel’s tranquil courtyard (though tranquil courtyards aren’t in short supply in Hydra). We pay £1,613 for a seven-night B&B stay.

For ferry options between Athens and Hydra visit www.ferryhopper.com/en/ferry-routes/direct/athens-to-hydra. The ferries that run between the capital and Hydra are fast and comfortable. Price example: We pay 115 euros (£100/$100) for two adult tickets and one child ticket in business class from Athens (from the port of Piraeus) to Hydra with Alpha Lines. Turns out it includes a free glass of wine.