Follow
Home » Travel » How to Deal With the Rental Car Crunch

How to Deal With the Rental Car Crunch

On March 31, the day before he moved from San Diego, Calif., to Austin, Texas, Clay Hebert went shopping for a rental car. Before the pandemic, Mr. Hebert, a marketing strategist who frequently travels for work, was used to paying about $400 a week for a rental. To his surprise, Thrifty, Dollar, National and Alamo were sold out, and Hertz wanted $1,212 for a compact Mazda for a week.

“It seemed like either a typo or a cruel April Fool’s joke,” he said.

Alas, it was neither. Instead, it was evidence of how the pandemic has wreaked havoc in the rental car industry as companies responded to the plunge in travelers by selling off significant portions of their fleets. With travel rebounding over spring break, many travelers who had, before the pandemic, been accustomed to easy-to-find and affordably priced rental cars found themselves frustrated, stranded or gouged.

“It’s not very pleasant for the renter looking forward to vacation and cooped up for a year to find out they have to pay $300 a day for a Kia,” said Mike Taylor, the senior travel analyst at J.D. Power, a market research company. But he called the crunch a strong indicator for travel’s recovery.

With signs that summer travel will be busy — more than 75 percent of those recently surveyed in a weekly analysis by the market research firm Destination Analysts said they planned to travel in the next three months alone — the shortage of rental cars is expected to continue, meaning travelers will need to strategize well in advance to secure a vehicle, let alone an inexpensive one, especially in popular resort destinations like Hawaii. 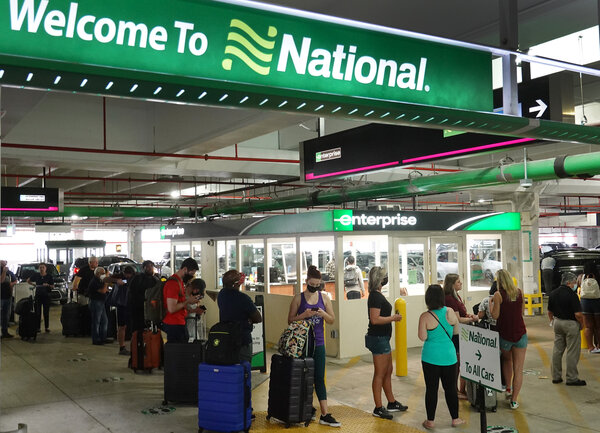 Where have all the rental cars gone?

AutoSlash, a platform that searches for rental car deals, first noticed the rental car shortage over the long Presidents’ Day weekend in February, when it said 18 of 20 airports it searched in Florida were sold out of cars, which was rare.

“We found a combination of a large upsurge in demand from people getting vaccinated and rental car companies that had downsized, leaving them with fewer vehicles to go around,” said Jonathan Weinberg, the founder and chief executive of AutoSlash.

For 2020, Avis Budget Group, which has the Avis and Budget rental car brands, revenue was down more than 40 percent compared to the previous year and it sold 250,000 vehicles. Hertz, which operates the Hertz, Dollar and Thrifty rental car brands and filed for bankruptcy protection last May, had reduced its fleet about 40 percent by the end of 2020 and recently announced it had secured $4 billion in financing to expand the fleet anew.

The global shortage of microchips, which is slowing car production, may retard that effort.

Enterprise Holdings, which has the Enterprise, Alamo and National car rental brands, said in a statement that it anticipates the surge in demand to continue “throughout the coming months, especially in pockets of the country popular with travelers. At the same time, there are challenges in vehicle supply, due in part to the recent global chip shortage impacting new vehicle availability.”

How can I get an affordable rental car?

The first step to securing a rental car is shopping early, perhaps even before you book a flight. Through the travel search engine Kayak, I found a weeklong rental for the third week in April in Honolulu at $700 that cost $400 a few weeks later.

Hertz is encouraging “customers to book as early as possible and at the same time they’re making other travel arrangements,” wrote Lauren Luster, a spokeswoman for Hertz, in an email.

Not every destination is experiencing a shortage of cars, but it’s been evident in popular resort areas in Arizona, California, Florida and Hawaii, where it also pays to search beyond airport locations.

The strategy worked for Mr. Hebert, the Austin renter, who was ultimately able to rent from a neighborhood Hertz location, though he was only able to rent a much larger vehicle — a cargo van — than he wanted, and paid $159 for a week.

“If the car rental search engine says the cars are all gone, get crafty,” said Leigh Rowan, the founder of Savanti Travel, a travel management service, who recommends using Google Maps to search for car rental locations near your hotel or vacation home rental. “In major tourist spots like Wailea in Maui, there are four different car rental spots walkable from hotels.”

For his own April break on the island of Hawaii, Mr. Rowan had made a reservation with Alamo through Costco — retail memberships often offer discounts on travel services such as rental cars — for a minivan to accommodate his group of seven. To ensure it would be there when he arrived, he called the local branch the day before his arrival, explained why he needed the guarantee of a large vehicle and asked for the name of the person who would be working when he arrived.

“These extra steps are annoying,” but essential, he said, especially in Hawaii, where the state’s Department of Commerce and Consumer Affairs told a local television station that it is launching an investigation into the high cost of rentals that have been listed for as much as $600 a day.

In lieu of hunting yourself, you can use AutoSlash, which uses rental car company coupons and discount codes to sort through search results that it says would take consumers considerable time. The free service also uses things like wholesale store and airline frequent flier program memberships and affiliations with organizations like the American Automobile Association and AARP to find deals.

The service then tracks the rental to ensure it remains the best value, emailing travelers to rebook in the event of a price drop.

There are, of course, transit alternatives to renting a car, including ride share services, bike share systems and public transportation.

For those seeking the privacy and control of an auto, Turo acts like Airbnb for cars, allowing individuals to list their vehicles for rent on the platform, where choices range from $20-a-day older subcompacts to luxury cars like a Lamborghini in Miami for more than $1,000 a day. Vehicle owners set the terms for things like daily mileage limits.

“In summer, when we started seeing people getting anxious to get out of their homes, we saw a boom in local travel and local destinations,” said Andre Haddad, the chief executive of Turo. “The local travel boom was advantageous to our hosts because people needed cars to get to these destinations and less so planes.”

For Justin Villa and Meagan Malcolm-Peck, Turo is a side gig through which they rent five Jeeps in the Denver area, which cost between $73 and $98 a day (they also have a heavy-duty pick-up truck for $184). After an initial three-month crash at the start of the pandemic, business has been steady with drivers and rental periods have extended beyond weekends. They encourage guests to rent about a month in advance.

Early on “people were renting locally,” Mr. Villa said. “Now most are people coming in from the airport to go to the mountains.”

If you care to bundle the expense of wheels with living space, R.V. sharing services similarly offer lots of choices, though prices have inched up during the pandemic. Outdoorsy, a peer-to-peer rental platform that allows travelers to rent from R.V. owners, has seen average rates rise from $121 a night in 2019 to $161 a night in 2020 based on demand, which soared last year. Second quarter rentals in 2021 compared to the same period in 2019 are up 137 percent.

For the desperate, nontraditional sources for rental cars include home improvement stores like Home Depot, which rents trucks designed for do-it-yourselfers to transport supplies, and U-Haul, which advertises truck rentals starting at $19.95 a day.

Zach Whitehead, a software engineer based in Cleveland, was recently on spring break with family in Fort Lauderdale and briefly considered a U-Haul when he couldn’t find a standard rental car.

“I said to my sister, ‘I’m assuming you don’t want to ride in the back of a box truck,’ and she agreed,” according to Mr. Whitehead, who stuck to Uber for the week.