How to enjoy a relaxing stay in Tokyo, Japan's intriguing capital

Say hello to Tokyo… the grown-up way: Forget the frenetic pace, youth culture and throbbing neon signs – here we reveal our top tips for enjoying a relaxing stay in the intriguing Japanese capital

After three years away from Tokyo, it’s the familiar face of Hello Kitty that is first to greet me as I step off the plane. Images of the cat – an icon of Japan’s kawaii (cute) culture – are as ubiquitous as cherry blossoms and geisha. But this time, Kitty looks different: she’s sporting a face mask. A sign of the times.

After nearly three years closed due to Covid restrictions, Tokyo is back on the holiday to-do list. But if the thought of 24-hour neon, robot hotels and conveyor-belt sushi leaves you reticent, then it’s time for a rethink. Tokyo can be sophisticated, relaxed and, always, intriguing.

A refuge next to the royals 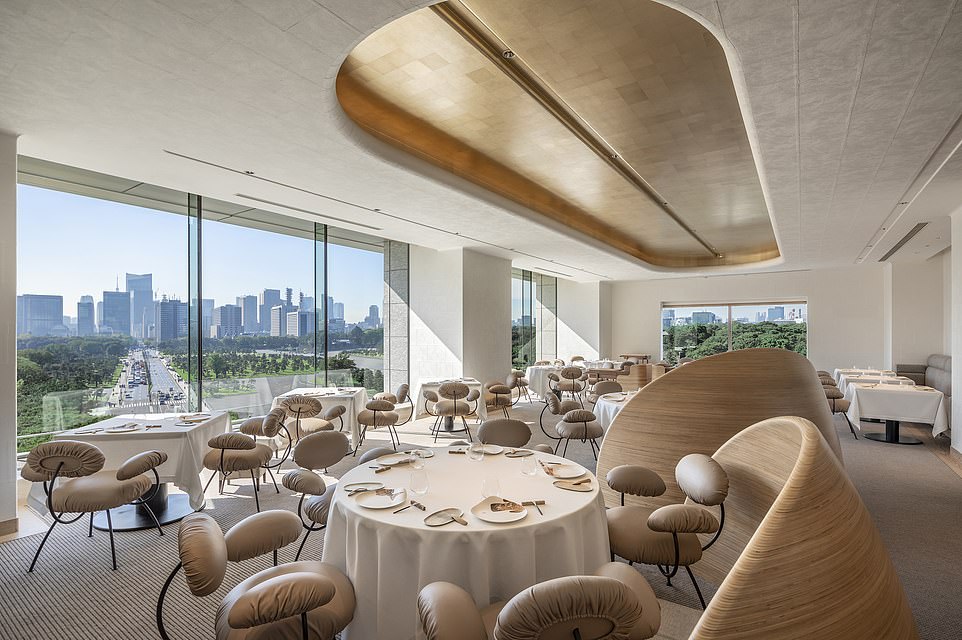 Palace Hotel Tokyo, in the Marunouchi district, has ‘everything you might expect from a top hotel’. Pictured is the Esterre restaurant 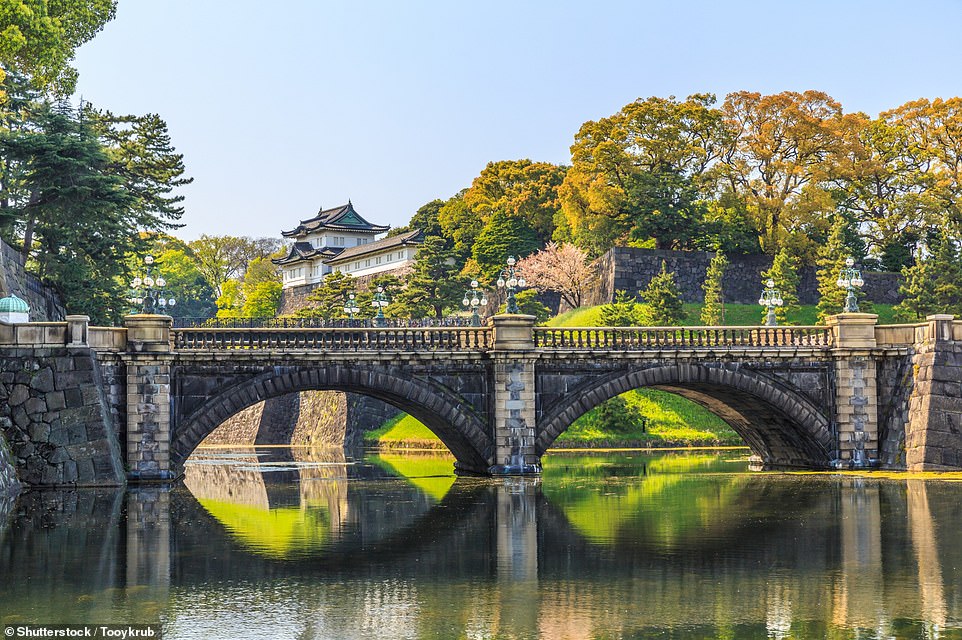 There’s no denying that Tokyo can be overwhelming, so start by finding a refuge in which to base yourself. I recommend the 23-storey Palace Hotel Tokyo, in the Marunouchi district, which is a true haven.

It is renowned for its attentive hospitality, known as omotenashi, and it has everything you might expect from a top hotel – gorgeous rooms and suites, Michelin-starred restaurants, a spa and English-speaking staff. But what sets it apart is its location, right next to the Imperial Palace, boasting 180-degree green vistas of the outer gardens. Beyond is the iconic Tokyo cityscape stretching from Ginza to Shinjuku, where red lights twinkle at night but there’s no neon: illuminated hoardings are banned this close to the Emperor’s home.

But when you are ready to dive in to the city, Palace Hotel Tokyo has its own direct access to the nearest Metro station, Otemachi, which, like the whole transport network, is safe and scrupulously clean and has ample English signage. B&B in a deluxe King Room at Palace Hotel Tokyo costs from £395pp, per night, based on two sharing (en.palacehoteltokyo.com).

Breakfast on the best sushi 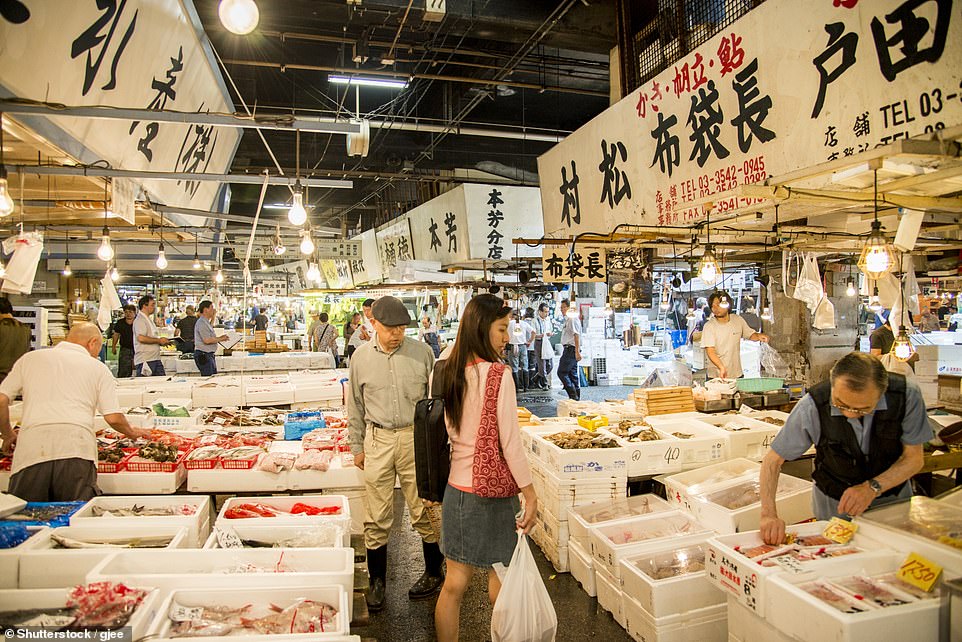 Tsukiji fish market, above, is open from 4am and is just ten minutes by taxi from Palace Hotel Tokyo

Tokyo is surprisingly sleepy in the early morning, so if the jet-lag hits, it’s a good time to explore.

Tsukiji fish market (tsukiji.or.jp/english) is open from 4am and is just ten minutes by taxi from Palace Hotel Tokyo. Although the famous tuna auctions now happen at another market in Toyosu – a further ten minutes away by taxi – Tsukiji’s market remains a great place to see anything and everything from the ocean, from giant spider crabs to dried squid.

The market is hemmed in by main roads, so you can immerse yourself without fear of getting lost. Step in beneath the giant tuna sculpture and head to Sugimoto Hamono (sugimoto-hamono.com/e), the master makers of Japanese knives which they can engrave for you.

There are plenty of places to eat, but for the finest fish breakfast, go on to Toyosu (sushi-yamazaki.com/english) and queue for Yamazaki – the best sushi counter in the market.

Forest bathing in the city 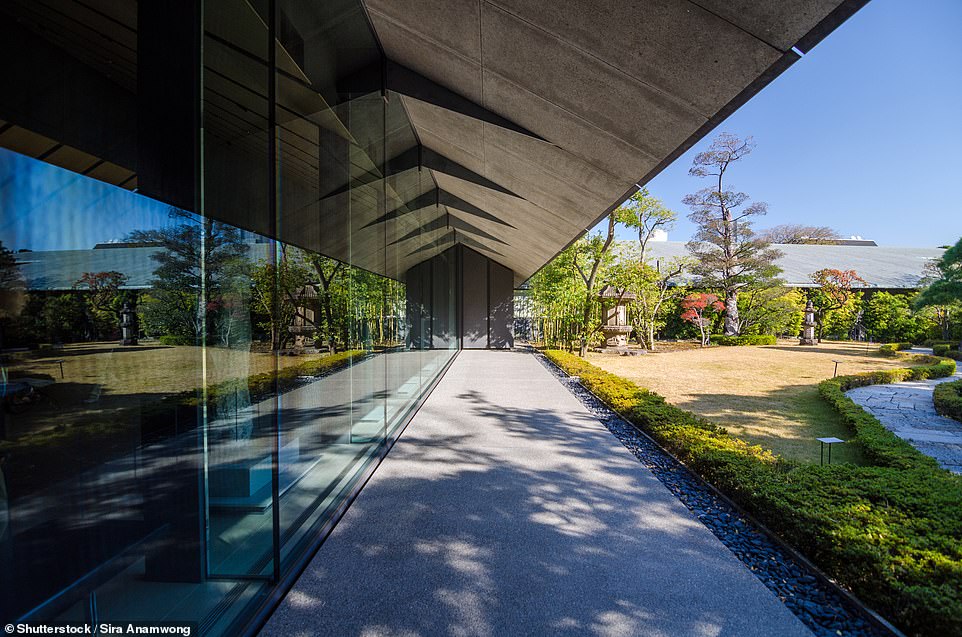 Nezu Museum (pictured) houses a private collection lauded for its tea-ceremony utensils and ancient Chinese bronzes. The star attraction for Kate, though, is its garden – ‘an almost inexplicable find’

An early start warrants a slow day, so visit Nezu Museum (nezu-muse.or.jp/en), an oasis of serenity just a stone’s-throw from the glitzy fashion stores of Omotesando.

Housed in a building by Kengo Kuma – the architect behind the Japan National Stadium built for the Tokyo 2020 Olympics – and screened by towering bamboo, Nezu is a private collection lauded for its tea-ceremony utensils and ancient Chinese bronzes.

The star attraction for me, though, is its garden. An almost inexplicable find in the heart of fashionable Minami-Aoyama, its four acres evoke deep valleys and mountains, with a forest of pines, camellias and oaks. Here you can practise the Japanese art of shinrin-yoku, or forest bathing, and engage the senses with a meditative stroll along the mossy pathways.

Listen to birdsong! In Tokyo! And the trickle from gurgling natural springs and ponds filled with koi. Relax your eyes on the green patchwork dotted with ancient stone sculptures from Japan and China. In the centre of the garden are four private tea houses, so take tea and strawberry sponge in NezuCafe, immersed in the greenery.

Tea break without the ache

A classic Japanese tea ceremony embraces elements of arts, history and culture, from Zen meditation to ikebana (flower-arranging) and calligraphy, but it’s not unusual for visitors who’ve tried it to be left mystified and with aching limbs, having spent hours kneeling.

Not at Sokkon. Created by tea master and monk Soko Utagawa, Sokkon (sokkon.jp) offers the chance to experience the ceremony alongside the convivial eating and drinking that usually accompanies a genuine tea party – with no kneeling required. It is hidden away in the basement of a nondescript tower near Nezu Museum. Inside, a series of intimate rooms is revealed, including a tiny wabi-sabi tea house into which one crawls to see the tea master’s slow, deliberate preparations of the matcha, and to drink the thick green result.

Afterwards, an exquisite meal of vegetables, rice, fish and pickles is served, washed down with sake, generously poured by the tea master (who also happens to speak fluent English). It is insightful, memorable and fun – a tea ceremony to remember for the right reasons. I won’t spoil it, but the end is marked with cocktails in another secret room with a theatrical reveal.

Eat with the (Michelin) stars 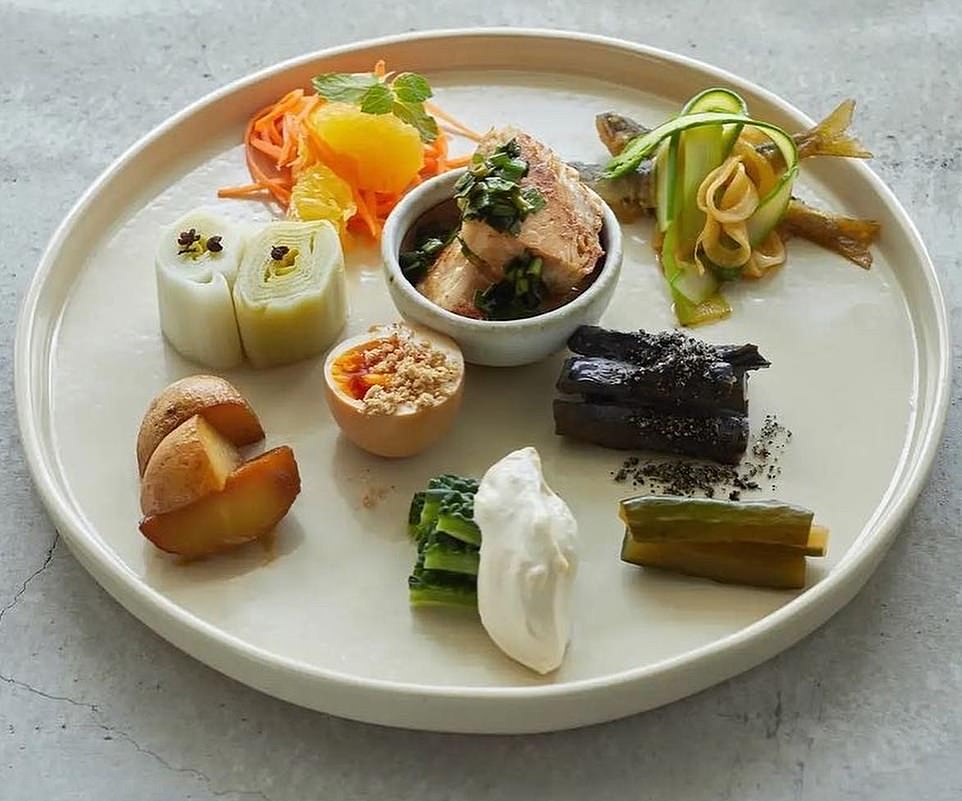 ‘Expect to eat a lot of good food in Tokyo’. Above is a dish served at Salmon & Trout in Setagaya

Expect to eat a lot of good food in Tokyo: at the last count, the city boasted more than 200 Michelin-starred restaurants.

If you have your heart set on any of those, book in advance or enlist an insider, such as your hotel concierge, to help.

I nabbed a counter seat at Tempura Kondo (tempura-kondo.com/en) – which has two Michelin stars and once, being fully booked as usual, turned away President Obama – through myconciergejapan.com, which also gets around the problem that many of the restaurants have websites that are in Japanese only.

Don’t worry if you can’t get a star booking – there are many more gems that the locals hope Michelin will leave well alone, lest they can no longer get a table. One such place is Atelier Fujita (atelier-fujita.com) in Yoyogi-Uehara, a Japanese-French seafood restaurant that just also happens to be one of the best spots for vegetarians. Or there’s Salmon & Trout (salmonandtrout.tokyo/en), in what looks like a bike-repair shop in Setagaya.

For an excellent sushi-counter show, Sushi M (sushi-m.com) is a 12-seat restaurant run by a chef and sommelier, both formerly of Michelin two-star spot Narisawa. Its USP is sake pairing: try Akishika motoshibori and be converted to the rice spirit. 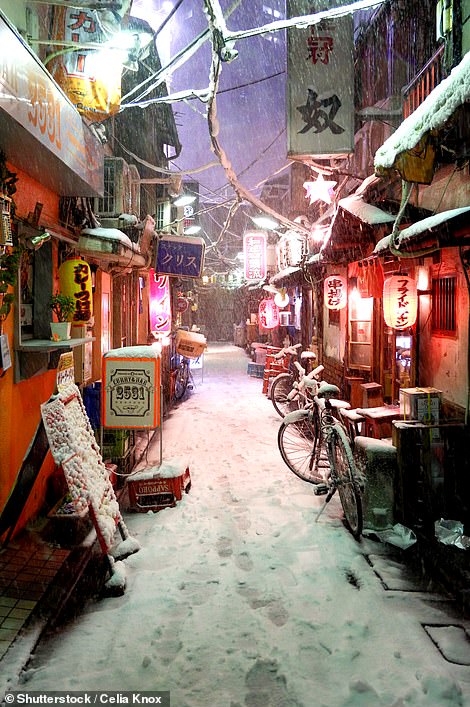 Despite the many fine-dining options, my choice would always be to go local and head for a yokocho – slightly shabby alleyways packed with restaurants and bars, that are found all over the city.

Yokocho are hard to navigate – little English is spoken and there are fewer English menus – but they are one of Tokyo’s most memorable experiences, so get a guide.

I visited the labyrinthine alleyways of Sankaku Chitai yokocho in Sangenjaya with guide Tyler from Inside Japan Tours (insidejapantours.com). Within minutes of meeting, we were ducking into an unmarked lane – one I would certainly have missed – into the thick of food shacks, bars and intriguing places behind sliding doors. I was thoroughly lost by the time we reached the unassuming spot that Tyler was so excited to show me.

We were greeted with exuberant cries of ‘Irasshaimase’ (welcome to my restaurant) as we took our bar seats, wedged between a young couple and an elderly regular. Plates of sashimi, chestnut tempura, tuna and grilled burdock began arriving – and sake flowed. This modest place turned out to be one of Tokyo’s best spots for rare sake: an array was listed almost casually on a whiteboard above the bar.

Later we moved on to a first-floor bar somewhere else in the maze, with shelves of Japanese whiskies and an immaculate bartender. We left late, Tyler guiding me back through the yokocho to my hotel, after an evening that wouldn’t have been possible without his inside knowledge. 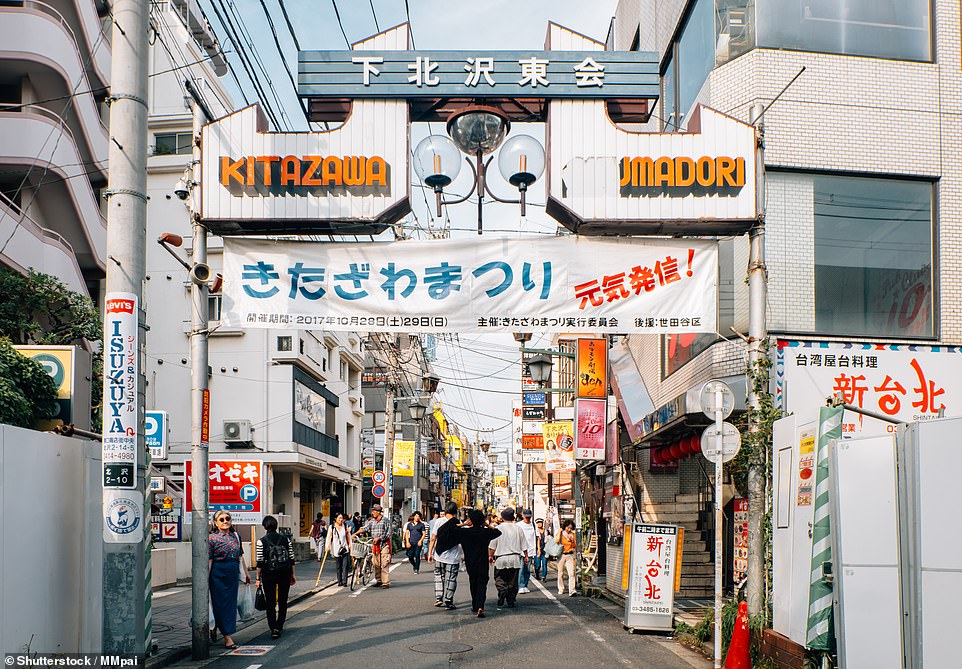 Nights in a yokocho need to be followed by lazy days, and there are few better places to gently soak up Tokyo life than the residential neighbourhoods of Sangenjaya and Shimokita.

The area between them has recently been pedestrianised and given a green makeover, with gardens, coffee shops and artisan bars – and even a new traditional-style hotel, Yuen Bettei Daita (uds-hotels.com/en/yuenbettei/daita), with an onsen (hot spring bath). Its compact rooms have shoji screens, wooden floors and futon-style beds (raised off the floor), plus kimonos and traditional sandals to wear to the bath.

It’s a genuine Japanese bath, so no tattoos or swimming costumes are allowed – there are separate baths for men and women – and you should wash before you enter. Locals use the onsen as well as guests, but if you’ve checked in to the hotel (B&B from £191 per room, per night), the in-room iPad can save your blushes with a live feature that tells you when the bath is quiet.

Take a dip and immerse yourself in a side of Tokyo that is as local as it is low-stress. Do this and you’ll be leaving feeling energised, inspired and completely under the spell of this sprawling metropolis.