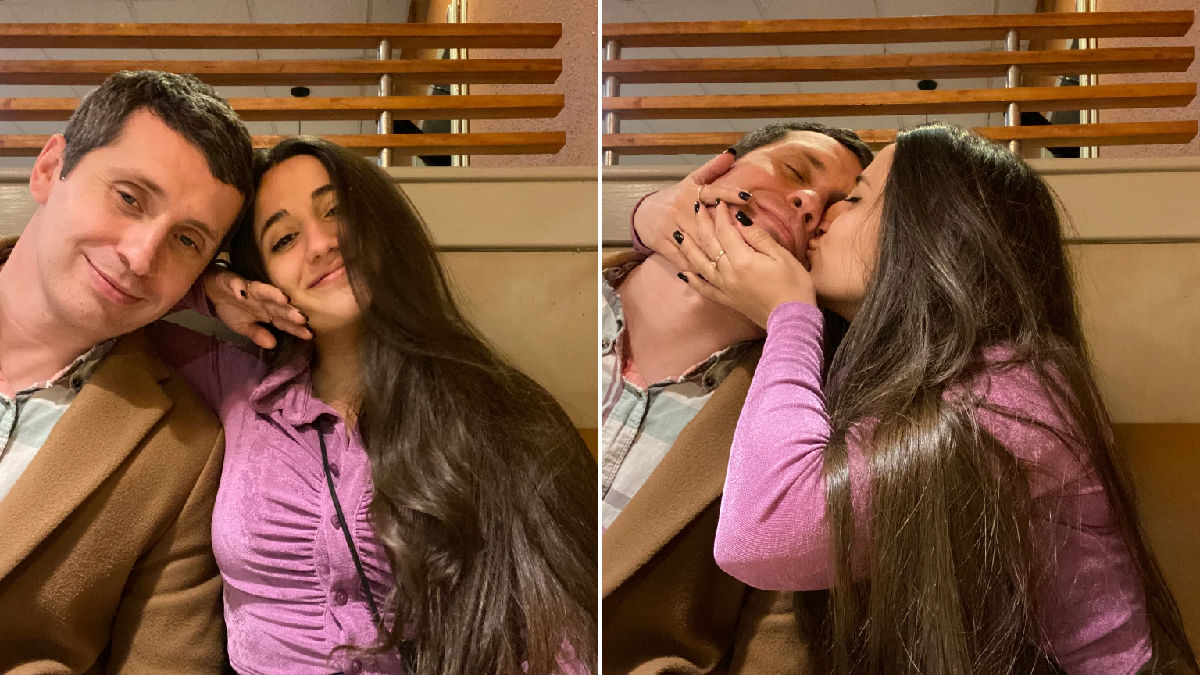 ‘What if this coronavirus thing gets really bad?’ I asked my partner, Paula.

‘Really? You think so? Don’t scare me.’ Her eyes watered as I took her in my arms and held her tight.

It was 2 March 2020 and we were at a bus station in Spain, having just spent 10 days together while we were dating long-distance at the time.

‘Look, no matter what happens, we’re gonna be OK, alright.’ I told her. ‘We’re going to get through it. I’ll swim to Spain from the US if I have to.’

We laughed, then kissed and I boarded the bus. She waved as it pulled away.

Nine days later, the WHO officially declared Covid-19 a pandemic. What followed were our desperate attempts to be with each other.

I first met Paula on a screen in a Zoom meeting in May 2019 for an event we were putting together where we presented Spanish culture to English-speaking tourists for a company we both worked for.

She was my international colleague; her role was to organise the event and give insights from her perspective as a Spanish native. I was in the USA at the time.

Paula materialised before me and my heart flew. She was a classic Spanish beauty, dark skin, fine features, long, deep-brown straight hair, with a sweet voice.

Even though I was interested, I did not reach out to her after the meeting.

We finally met in person during Fiesta in Pamplona, Spain, in July 2019 through a company-organised trip. When I first saw her, I thought, ‘wow, she’s cute, peppy and strong-willed.’

We would get into these arguments about Spanish culture that I thought I knew so much about because I’d been researching and attending Spanish Cultural Festivals for 15 years. She’d often win.

That’s when I realised I hadn’t seen this culture through the eyes of a young Spanish woman who grew up in it. I became fascinated with her insights. I asked her out a few days before Fiesta ended.

She eyed me suspiciously. ‘What are your intentions?’ she demanded.

I didn’t know. I shrugged. Still somehow, I convinced her and we went out into the wild party together. We were inseparable for three days.

After the fiesta, we drove to the cliffs of Zumaia on the Basque coast. I held her in the warm waters with tendrils of her hair floating on the glistening surface. I looked deep into her brown eyes.

Everything in my world seemed to change forever. I told her I was in love. She wasn’t there yet, but I didn’t mind. I told her I would call her on my way home and be in touch and come back to Spain soon to see her.

I could feel her falling in love with me and over the next few weeks of video chats, she did.

I returned to Spain in August to see her. We spent time in Pamplona, then visited a festival in Cuellar, Spain. Then we both met in London in October, where we went to a boxing match and spent five days visiting the city.

She came to the US for 10 days in November to visit me in Louisiana – where I am completing my PhD in English at the University of Louisiana. She then met my friends and we flew to New York City, which was a place she’d always wanted to visit.

I returned to Spain in January and then again at the very end of February. After this latter trip, that’s when international borders closed down and we were torn apart.

Separated, we watched as the numbers of Covid-19 cases and deaths skyrocketed. The travel bans hit. Our trip to Miami in May was cancelled, so we postponed it to whenever the travel bans lifted.

Spain was completely locked down so Paula lost her event business. We spent five hours a day on video chat. We began to plan our future together – our life, marriage, family, kids, home, everything started to blossom.

But it wasn’t enough, we needed physical touch. We needed to be real in the moment, human, not little faces inside screens. The holding pattern was taking a toll on us. We kept naively hoping for any sign that the pandemic would end.

In July, Spain claimed they would accept tourists. I tried to board a plane to Madrid. They chased me down the boarding ramp and removed me because I didn’t have an EU passport. It crushed us. I tried to explain to Paula.

‘Baby, they wouldn’t let me on the flight, I’m not coming to Spain.’ Our connection went shaky, the screen turned black.

Most people would have given up at this point. The weight of the situation felt so tremendous. The whole planet down to the tiniest microbe seemed to be telling us no. Maybe we weren’t meant to be.

Then we got mad. We chose to fight.

A few days later that same month, we quit our jobs and flew to Ireland. We chose Ireland because Ireland and the UK claimed they were welcoming tourists and the flight and Airbnb for Dublin was half the price compared to London. I called the airline and the embassy, and both confirmed I should be let in.

I approached the immigration officer, a portly Irishmen.

‘Reason for travel?’ he asked bitterly. ‘Tourism?’ I shrugged.

‘Tourism in the middle of a bloody pandemic? Then the answer is no, you’re denied entry. So, let’s try this again. Why should I let you enter Ireland?’ He glowered at me as my heart raced.

‘Look, it’s not tourism, OK. It’s love. I’m in love with a woman from Spain and this is one of the only places in the world that will take us both.’ I pleaded. ‘Please, I’m begging you.’

‘You’re telling me Ireland is the only bloody country in the world that will have youse both? That’s just grand.’ He sneered and stamped me into the country.

We were finally together in our little quarantine paradise with the seagulls in the sky outside our balcony. We did all the things that lovers do; we spent hours laying in bed, touching, holding hands, looking in each other’s eyes, rekindling our intimacy.

We cooked every meal, I studied for my PhD exams. We even borrowed a weight set from my Irish friend Brendan and exercised daily. We pinched ourselves to make sure we weren’t dreaming.

But the fight wasn’t over. We had to get into Spain and get a civil union or this might be the last time we saw each other in who knows how long. We called every official – hours on hold – until the verdict came down.

They told me that if I flew into Spain, I would be arrested. They’d hold a trial, I’d be deported, and I would never be allowed to enter Spain again. We chose to cherish our time together.

Then I found a post online about people in our same situation getting through to mainland Europe through the Eurostar train. We took a chance and flew to London that day.

We got in line. The Immigration Officer screamed at a woman who kept digging into her bag, pulling out documents as she wept. We changed lines.

Remarkably, our officer stamped us through to France.

I met Paula’s parents for the first time the next day when they ‘smuggled’ me across the France-Spain border.

In August 2020, we got the civil union. But it wasn’t enough – the travel bans were getting worse as the third wave hit. So I went remote as a university instructor and moved to Spain in November 2020, we rented an apartment in Pamplona.

Then after a lot of talking it over, we chose to take a chance and move to the US in January 2021. We did a two-week quarantine in Mexico, then entered. We rented a shoe box apartment in Cancun and entered via the Fort Lauderdale airport in Florida. It was nerve-racking but everything was relatively easy and went smoothly.

At first, Paula couldn’t legally work so she studied remotely while I worked around the clock driving passengers for Uber and Lyft and teaching at the university. In December of 2021, Paula got her work and travel papers and has gone to work for Door Dash and Uber Eats delivering food and does some babysitting.

We spent Christmas with her family in Spain. In New Orleans, we keep odd hours and are extremely happy, saving money and planning our wedding.

Our wedding is scheduled for 3 July in Pamplona. The wedding will be a huge three-day event with over 100 guests including a bunch of my friends and family from the US and Europe

Marriage strengthens our legal right to be together even more than a civil union and with the travel bans over, we finally feel safe.

Our wedding will be the culmination of an incredible struggle. The whole planet told us no, but we chose to fight because our love meant that much to us.

After the wedding, we’ll split time between the US and Spain. When we get back from Spain this August, we will buy a home in New Orleans. I will graduate with my PhD in December and hopefully begin work as a tenure track professor.

Paula will begin her studies at Mondragon University, a Business school in Irun, Spain. Then in the fall of 2023, we plan to buy a condo near the school. We will bounce back and forth between countries so she can maintain her residency in the USA.

Life for us now is simple, we make house, we work, we play, we enjoy the nightlife in New Orleans, we build toward our goals every day and fall asleep in each others arms every night.

It all feels like a dream, or maybe even a movie.