Immerse Yourself in Indigenous Culture

Cultural attractions like theaters and museums took a hit during the pandemic. But for those interested in heritage tourism or Indigenous culture in the United States, immersing yourself can be done safely and simply, outside.

With a focus on the outdoors or open-air experiences, these eight parks, heritage centers and exhibits offer fresh opportunities to confront not just the history, but also the present-day realities of Native Americans. Visitors can also meet, listen to and learn from tribal members who are emerging as crucial liaisons in these outdoor spaces.

“I’m lucky to be working in a time when people want to acknowledge the history,” said Samantha Odegard, a member of the Pezihutazizi Oyate, or Dakota Nation, in Minnesota. As one of 200 Tribal Historic Preservation Officers in the United States, Ms. Odegard, 38, advises federal agencies on how to protect sacred sites in public areas.

Native Americans “are on every inch of this continent,” Odegard said. “Whatever piece of public land you’re standing on, chances are there’s something there.”

Here are some destinations that spotlight Indigenous culture, from Virginia to California.

Of the roughly 300 federal boarding schools built for the purpose of “assimilating” Native American children into Euro-American society, only the buildings of the Stewart Indian School in Carson City, Nev., which operated from 1890 to 1980, remain intact. Its 65 colorful stone buildings — made by students under the watchful eye of Hopi masons — are a grim testament to the destructive learning methods that were used here during the earlier part of the school’s years of operation. The site opened as a museum in 2020, but during the pandemic, travelers have been able to do self-guided tours of the campus through an audio feature on their cellphones. To hear recordings of former students and staff describing what life was like inside the walls, visitors need only dial 775-546-1460. “We definitely had an increase in the number of people doing the trail in 2020,” said Bobbi Rahder, the museum’s director. “Parents doing home-schooling would bring their kids out here.” Alumni continue to play an active role in shaping future exhibits, which deal with the intergenerational trauma caused by such facilities. (Free) 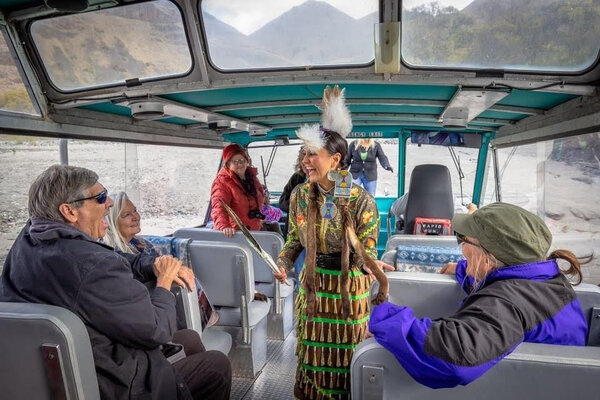 To better supply an Indigenous voice to the history of Nez Perce (Nimiipuu) National Historic Trail, a 1,170-mile route that traces the flight of the Nez Perce tribe in 1877, the Nimiipuu tribal member Stacia Morfin began her own tour company in 2019. Her company, Nez Perce Tourism, offers an itinerary called “Hear the Echoes of Our Ancestors,” which involves a daylong boat trip on the Snake River into Hells Canyon, the nation’s deepest gorge. Along the way, Morfin shares traditional Nimiipuu songs, and offers visitors a chance to reflect on their own connection to the land. “What matters is that we’re sharing stories from our own perspective,” she said. “For the last 200 years, the colonial perspective has dominated our society. What we’re trying to do is decolonize these places.” In Buffalo Eddy, an archaeological site 22 miles south of Lewiston, vivid petroglyphs hint at the Nez Perce’s 8,000-year-long tenure of the land, though Morfin believes the timeline is twice as long. “It’s so important to remind people this is our homeland,” she said. “Through all the atrocities, we’re still here. We can still share our stories.” (Tours from $150)

Approximately 8,000 years ago, Indigenous tribes would gather at the confluence of the Mississippi and St Croix Rivers, near what is now Minneapolis. Today, the site is the Spring Lake Park Preserve, and a haven for cyclists and birdwatchers. The 1,100-acre nature area — a 20-mile riverfront bike path connects it to St. Paul — feels like an oasis. Bald eagles, egrets, great blue herons and pelicans use the riverfront as a migration corridor and in the western portion of the park, 150 acres have been restored to tallgrass prairie. The wildflowers in summer are not to be missed. (Next year, a herd of bison will be reintroduced for grazing on the land.) Between picnics under the towering oaks and hiking the 8,000 Year Walk, a quarter-mile trail with interpretive signs, visitors can get a feel for the park’s life cycle. In the years ahead, new trails, a boat launch, and campsites will be added, but not without gaining approval from tribal representatives first. “We want to accommodate public recreation,” said Lil Leatham, a senior planner with Dakota County Parks, “but we also want to protect and be good stewards of the Indigenous sites within the park.” (Free)

At this new public park that opened in eastern Virginia last month, an open-air interpretive center offers a timeline of Indigenous life, from the prehistoric period up to our present day. But a few panels were left blank. “We left room for the timeline to be added to,” said Tom Smith, the deputy director of operations for the Virginia Department of Conservation and Recreation. “We didn’t want to present this like a history project.” Rather, the open-ended narrative sends a clear message that, as Smith said, “Native culture is still alive and strong in Virginia.” Machicomoco is Virginia’s first state park specifically focused on Native American culture, and members from the 11 state-recognized tribes weighed in on interpretive themes, signage and even the name (Machicomoco is an Algonquin word meaning ‘special meeting place’). Set on a quiet stretch of the York River, the park offers scenic hiking trails, a paved bike path and 30 campsites. A canoe and kayak launch is available, too, though workers had to pause construction on it when they began digging up arrowheads and pieces of pottery. “The first place we picked was actually the same place the Natives used to get in and out of the water,” Smith said, “so we abandoned that site, and chose another location.” (Free)

The Desert View Watchtower, a 70-foot granite tower with a circular base that rises dramatically over the south rim of the Grand Canyon, has piqued the interest of travelers since it opened in 1933. Its architect, Mary Colter, modeled it after the Puebloan kivas scattered across the prehistoric Southwest. Back then, Colter imagined it as a ceremonial space, with huge picture windows framing the Painted Desert; it was also intended as a way to introduce visitors to the Indigenous cultures of the area. Nearly a century later, that vision is coming to fruition. In 2017, the tower began hosting Hopi, Navajo, and Zuni artists for jewelry making, weaving, pottery and storytelling events on weekends from May through October. This summer, the series is set to expand, with a packed roster of demonstrators, all taking place outside (check the website for updates about reopening). A dedicated intertribal cultural heritage site, complete with ramada-style huts, picnic areas and a welcome center, is also in the works. “This has nothing to do with archaeology,” said Janet Balsom, a communications chief at Grand Canyon National Park’s main office. “It’s about living people and traditions.” Notably, park staff will be hands-off, in order to let Indigenous people take charge of their own storytelling. “It’s going to be up to our tribal colleagues to be the first voice,” Balsom said. (Free)

You’ll want to pack your own lunch and drinking water when visiting Ute Mountain Tribal Park, a rugged, stunning archaeological site on Ute Mountain Ute tribal land. “It’s all primitive,” Veronica Cuthair, the park’s director, said. “We don’t have cafes or anything like that.” Visitors to the austere setting can witness layers of history in the 1,500-year-old cliff dwellings, strewn with pottery shards and bones, and decorated with rock art panels. Full- and half-day tours are led by Ute Mountain Ute tribal members as no self-guided tours are allowed, in part to create much-needed jobs for the community and because the itinerary can be rigorous. To reach the cliff dwellings, nestled deep in the canyons, visitors must embark on a three-mile round-trip hike and climb a series of four ladders. (Sturdy hiking boots are recommended.) Camping is available in Mancos Canyon, home to an array of captivating pictographs; just watch out for the wildlife. “That’s why we keep people on the trails,” Cuthair said, “so they don’t go wandering into the bushes where snakes might be, or badgers, or mountain lions. We have black bears out here, too.” ($30 and $49 per person for full and half-day tours)

“Minnesota history starts at Jeffers Petroglyphs,” said David Briese, a site manager at the southwestern Minnesota park that is home to over 7,000 ancient rock carvings. The earliest petroglyphs date to 5,000 B.C., though some were etched as recently as the mid-1700s, offering valuable clues to the diverse tribes who passed through this landscape. “Ever since the last glacier receded and this area opened up, Native Americans have been performing prayers and ceremonies here,” said Briese, noting the significance of showcasing an area marked by Indigenous mastery rather than misfortune. “You get to tell a positive story about Native American heritage that you don’t normally hear in a museum setting,” he said. The best time to see the carvings is dusk. During the summer, visitors are encouraged to stay for evening tours, where they can veer off the trails and explore the rock face (barefoot, since the site is sacred) themselves. “When the sun is at a low angle, it creates these shadows, so the images on the carvings literally pop out from the rock,” Briese said. (Adults $10; seniors 65+ $8)

Centuries ago, the villages of California’s Chumash people were scattered over 7,000 square miles, from modern-day San Luis Obispo all the way to Malibu and including the Channel Islands and parts of Kern County. By 1901, the tribe was forced to make do with an allotment of just 99 acres in the Santa Ynez Valley. Over the years, the Santa Ynez Chumash reservation has steadily expanded, and today features a health clinic, learning center and a casino. Next April will see further expansion with the opening of a museum dedicated to Chumash history, language and culture. Dome-like structures reminiscent of Chumash tule dwellings will house a welcome center and a classroom. while half of the 6.9-acre property will be dedicated to an outdoor cultural park planted with elderberry, Valley oaks, white sage and manzanita. Visitors will also be able to participate in outdoor demonstrations like tule mat weaving, acorn grinding and cordage making. (Admission details TBD)

TUI cancels more holidays including to Egypt and Thailand