Inside the world of VIP hospitality at the Qatar World Cup

Half-time dancers, waiter service (for wine and beer) and a lookalike Neymar: Inside the world of VIP hospitality at the Qatar World Cup 2022

The driver in charge of our coach transfer to the Al Bayt Stadium for the England vs USA game doesn’t seem quite sure of the way – and the Discover Qatar tour guide who’s sitting behind him at the front is giving him some help… over the PA system. Much to our amusement.

I’m in Qatar by invitation from Qatar Airways, with the airline hosting MailOnline Travel, providing flights, accommodation and match hospitality and revealing how the World Cup can be experienced VIP-style.

It’s a truly memorable experience for all the right reasons – but there are a few kinks, as Mr Solomon would probably admit.

The trip starts with a gold-plated Boeing 777 business-class flight from London Heathrow to Doha in Qatar Airways’ deservedly lauded QSuite.

I reviewed this cabin in 2019 and awarded it five out of five stars.

It’s ditto for this flight, too. The QSuite with its privacy door, huge screen and monumental square footage blurs the lines between business and first – and the service yet again is five-star-hotel standard.

The flight lands on the morning of Friday’s game at around 6am. 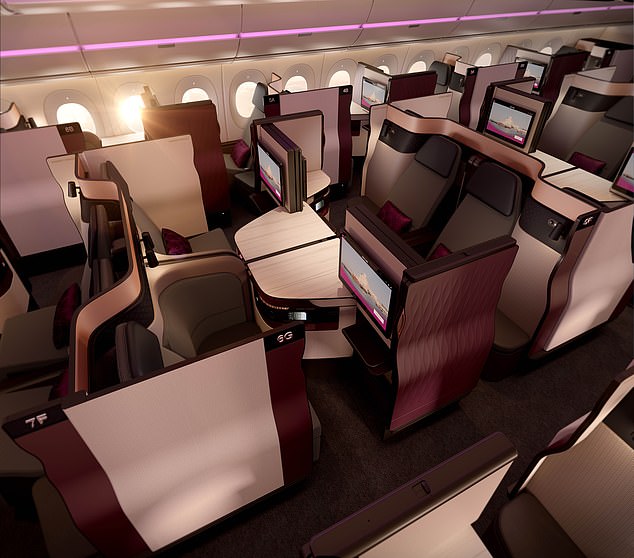 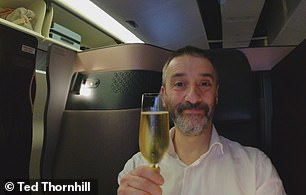 All we need to think about is putting one foot in front of the other, with the immigration process taken care of in the VIP Al Maha lounge. Passports are quickly checked and scanned in a machine and out we go to an SUV for a transfer to our hotel – the Hyatt Regency, just 15 minutes away.

Our driver, though, gets lost, and performs various U-turns before coming to a frustrated standstill outside some car garages.

It’s a little surprising given how slick Qatar Airways normally is and that he’s an official Qatar Airways/Discover Qatar transfer driver. 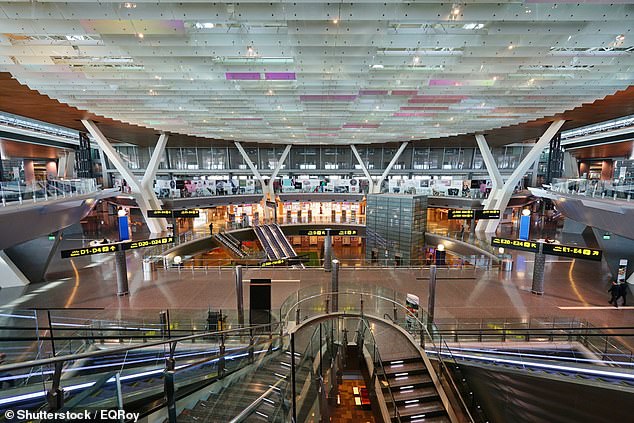 I suspect he’s a contractor brought in for the World Cup who’s not had time to nail the navigating.

We eventually reach the Hyatt, but there’s a slight delay to check-in. First we must negotiate the fencing surrounding the entrance, airport-style security X-Ray machines in the lobby and half a dozen police officers and security guards.

These measures are in place because the hotel is the base for the Ecuador team, which all adds to the excitement.

The hotel is the epitome of international cookie-cutter comfort. 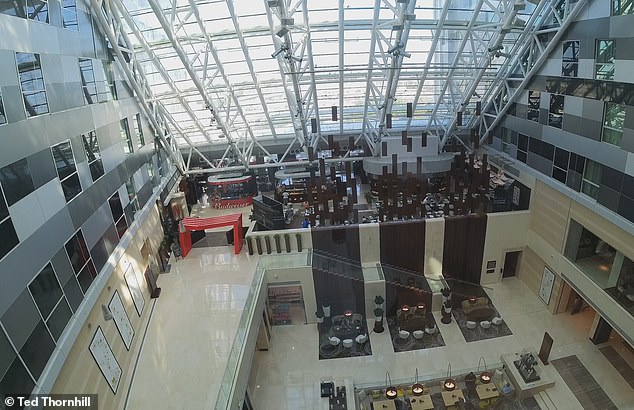 Qatar Airways puts Ted up in the Hyatt Regency, which has a remarkable atrium (above) 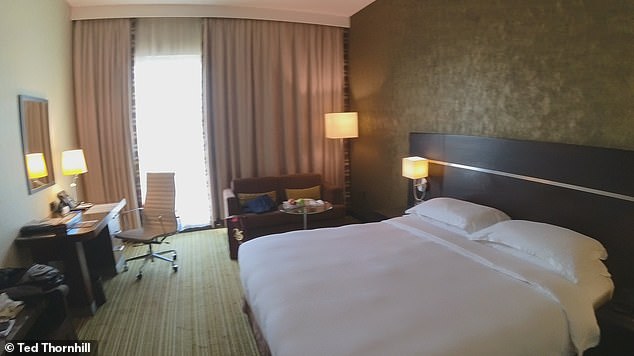 Ted’s room at the Hyatt Regency. He describes it as ‘unremarkable but pleasant’ 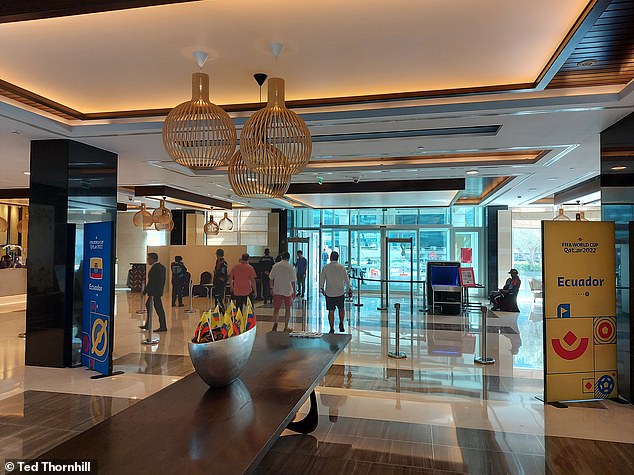 The Hyatt Regency is the hotel base for the Ecuador team, with guests required to pass through security measures at the entrance

My sixth-floor room is unremarkable but pleasant, with a huge luxurious bed, an ensuite with a walk-in rain shower and lots of handy plug points – including UK-standard bedside power sockets.

The atrium is more remarkable – vertiginous and airy and featuring two beautiful trees on the ground floor. I enjoy gazing at the space from the glass elevators that glide up and down one side.

After a nap I avail myself of the ‘Qatar House’ VIP area, an invite-only hospitality ‘village’ in an outside area adjoining the lobby.

There are huge screens for watching the matches, palm trees, football-themed lights, a buffet – plus at-seat service – a couple of static QSuites to hang out in and a catwalk, where dancers and freestyle footballers perform at half-time.

There are also vintage international football shirts on display that are owned by a Qatar Airways captain. 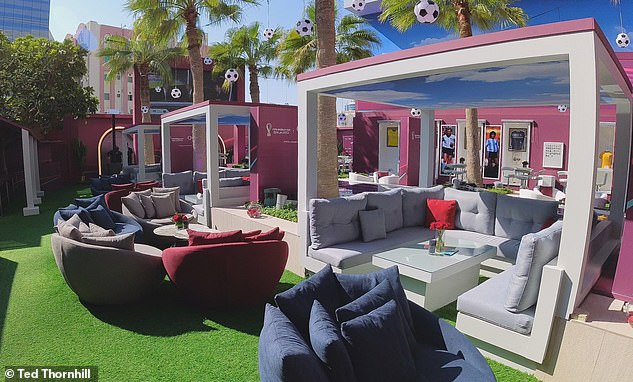 The ‘Qatar House’ VIP area, an invite-only hospitality ‘village’ at the Hyatt Regency 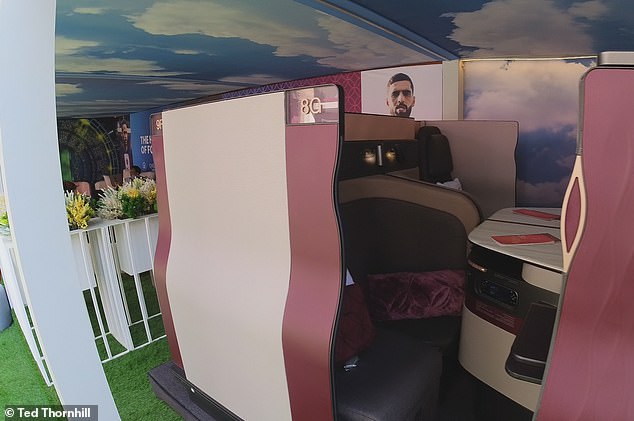 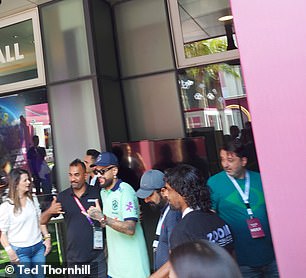 It’s a most convivial place to spend time and, at times a little bizarre. At one point, a Neymar lookalike turns up to film some video content – and has everyone fooled.

Though not my fellow journalist from the UK who is immediately suspicious, as the Neymar in front of us doesn’t seem to be carrying an ankle injury sustained from the Serbia match.

Hats off to fake Neymar’s doppelganger endeavours, though – he even has matching tattoos.

After watching Iran beat Wales on the Qatar House screens and glugging the first beer of the day, we jump on the transfer coach, provided as a service from the hotel by Discover Qatar.

Inside the tour guide/navigator hands out bottles of water and phones are plugged into the backseat charging points so they’re ready to capture England’s pulsating triumph.

Our amiable Qatar Airways host hands out the sacred match tickets as we trundle 30km (18 miles) north to the small city of Al Khor, the location of the Al Bayt stadium, which resembles a monumental tent. 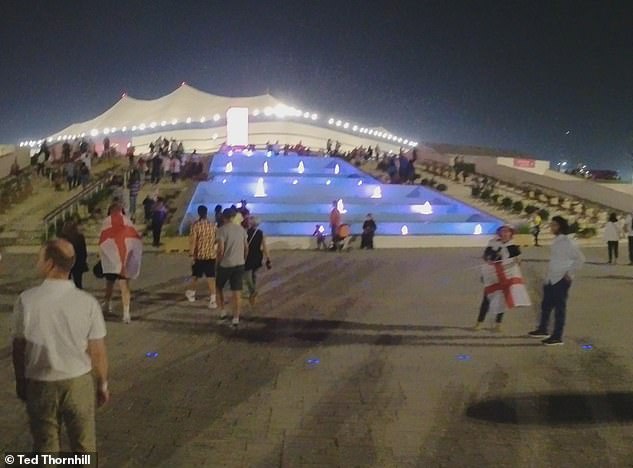 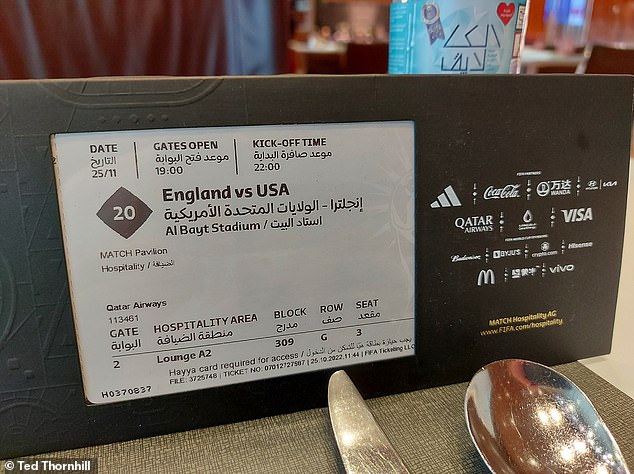 Mr Solomon loses his bearings a couple of times and at one point mysteriously comes to a halt while straddling lanes on the highway.

But we arrive in good time, with the tour guide revealing with pride how the onsite McDonald’s at the stadium serves Arabian-themed dishes.

We’re in the ‘Match Pavilion’ hospitality area, which takes us around 20 minutes to reach by foot from the gloomy, partially lit coach park.

The atmosphere thankfully feels a bit buzzier by the stadium entrance and inside is tingling with excitement.

Security right the way through is tight – the selfie stick on my camera is nearly red-carded – and we’re required to show our ‘Hayya’ visa clearance and match ticket multiple times before we finally enter the Match Pavilion hospitality lounge within the stadium.

On the way, women dressed in red robes stationed at doorways and escalators are all smiles, we’re given a gift (a notebook) and access passes to hang around our necks and coffee poured from traditional gold Arab pots is on offer at the entrance to the lounge itself.

The Match Pavilion lounge is the ‘basic’ hospitality package but tickets are still expensive, costing from $1,900 (£1,500). What you get in return is impressive. 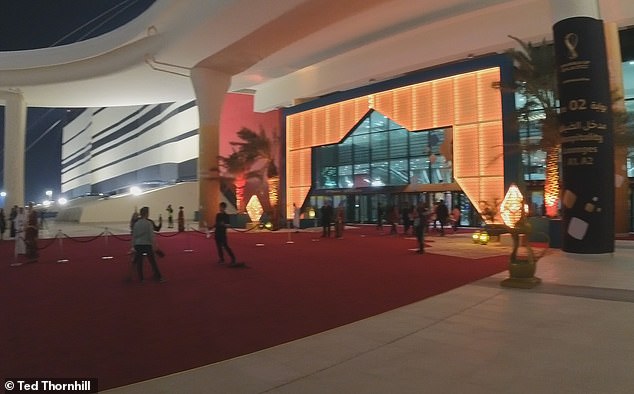 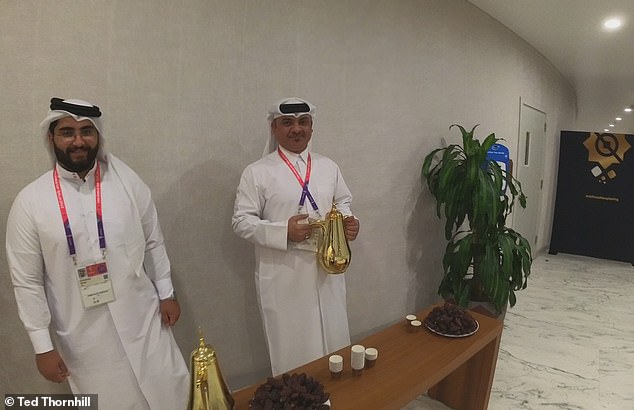 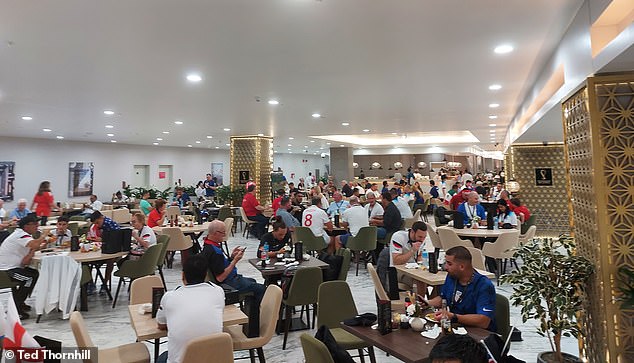 The atmosphere in the Match Pavilion lounge is jovial

Inside the beers (Corona, Budweiser and Bud Zero) are flowing. And so too are the wines – from French and Spanish whites to Lebanese rose and Argentinian Malbec.

The food is good (especially the desserts) and is served by friendly chefs at buffet stations – and the bar staff are chipper too. I ask for a Budweiser and get two, with a wink.

The tables and chairs are fairly basic – school canteen in style – but plentiful.

Our stadium seats, meanwhile, are knock-out – on the same row as Arsene Wenger and not far from David Beckham and Rio Ferdinand. 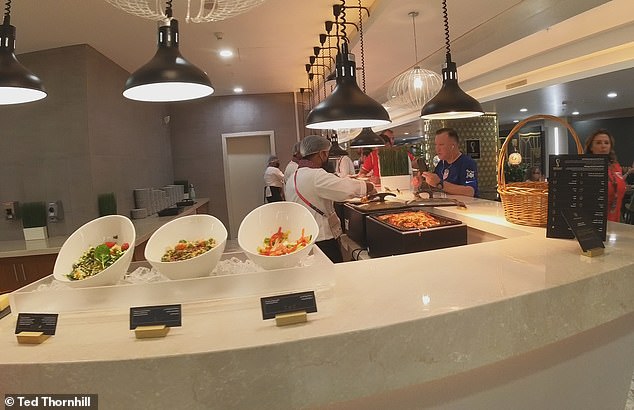 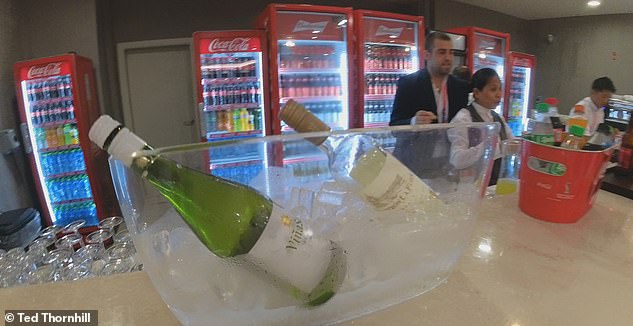 Alcohol at the Match Pavilion lounge is plentiful, with wine, beer and spirits on offer 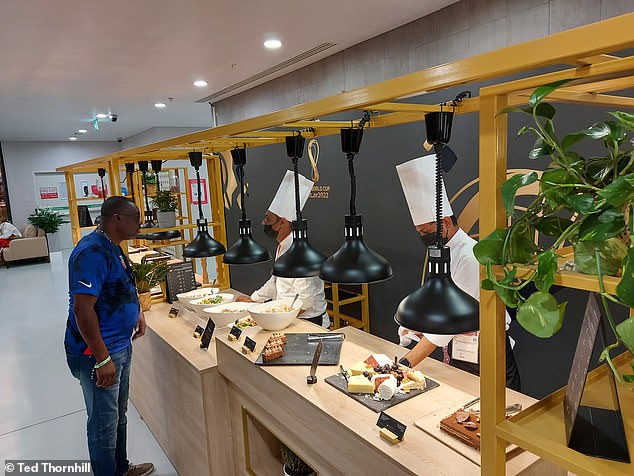 The dessert station at the Match Pavilion lounge

They, however, are being treated to ‘VVIP’ hospitality, which comes with swanky lounges in boxes with pitch views.

The atmosphere in our lounge is jovial pre-match, with rival England and USA fans chatting together and occasionally erupting into chant wars.

A bonus arrives for me – I bump into an old friend who I didn’t know was going.

Drinking alcohol in our game seats is banned, but that doesn’t make any difference to my enjoyment, personally. 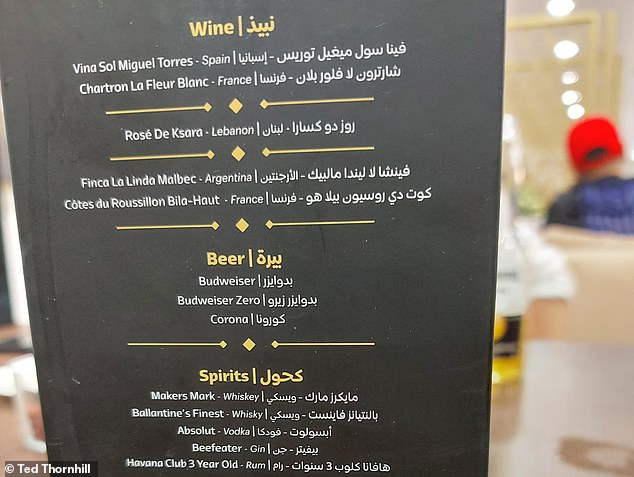 In contrast to the lively lounge vibes, the match is sadly an absolute dud – a 0-0 draw with the USA outplaying England for long periods.

Afterwards, it’s back to Mr Solomon and his luxury coach (we’ve taken photos of the registration plate to make sure we can identify it in the gloom) for a 1am transfer back to the hotel and a monster sleep.

The following day – after a decent breakfast of croissants, pain au chocolat, good coffee and chicken sausages and scrambled eggs at the hotel’s first-floor ‘Choices’ restaurant – there’s no sign of fake Neymar. But there is an actual Ecuador player signing autographs in the lobby as I head for my (hitch-free) transfer back to the airport. 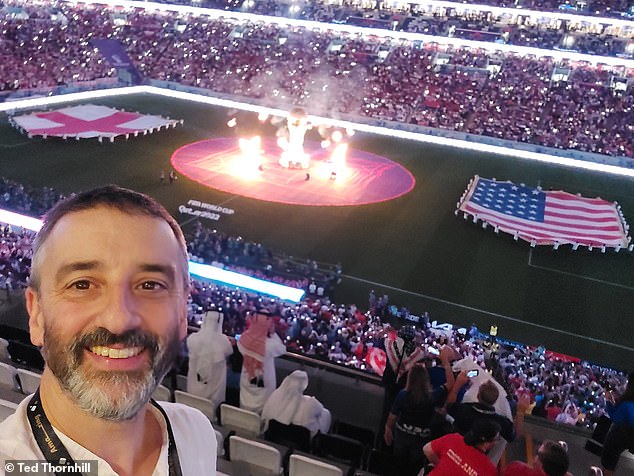 Ted describes his seat at the Al Bayt stadium as ‘knock-out’, with the likes of David Beckham sitting a few yards away in the ‘VVIP’ section

The QSuite flight home is predictably wonderful, with dramatic lightning storms visible as we head towards the Black Sea, the weather summing up the tournament – an amazing spectacle but turbulent.

My personal experience of it, though, is (mostly) plain sailing.

For more on Qatar visit www.discoverqatar.qa.

Video shot on the Insta360 One RS camera, which comes with two lenses – a 360 lens and a regular 4K lens. 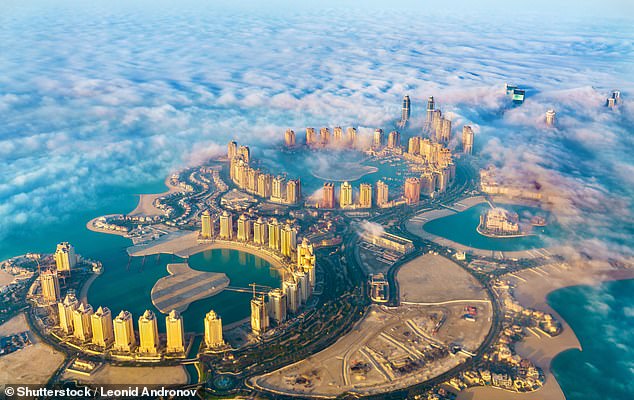 Doha, pictured, takes around seven hours to reach by plane from the UK