Meet the CEO of tiny Channel Island Herm, which has just 70 residents

Welcome to my office… in paradise! Meet the Yorkshireman CEO of minuscule car-free Channel Island Herm (and behold the stunning images that show why it’s heaven on earth)

Tiny Channel Island Herm has been home to monks, pirates, smugglers, famous writers, and even Prussian royalty. One resident, Prince Blucher, even introduced wallabies to the island in the 19th century.

Now it’s home to Craig Senior, originally from Rotherham and who moved to the island with his family to become its CEO.

Yes, this speck of land that measures just 1.3 miles long and less than 0.5 miles wide, has a chairman, charged with ensuring that it ‘becomes commercially viable and self-sustaining financially’. 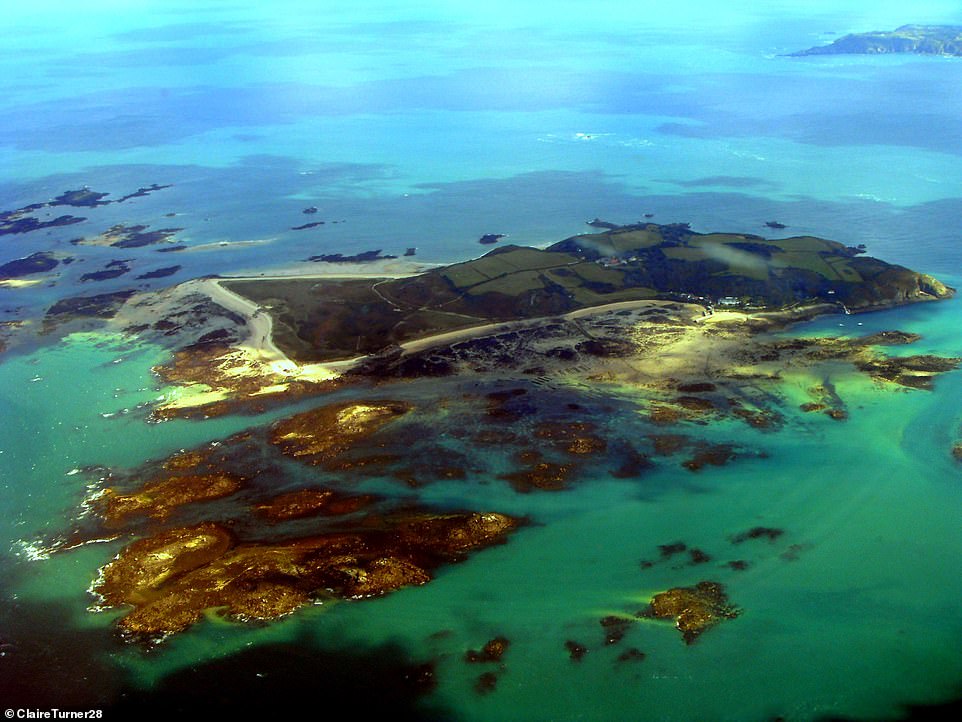 Herm measures just 1.3 miles long and less than 0.5 miles wide. This stunning picture of it was taken by Flickr user Claire Turner from an aeroplane window 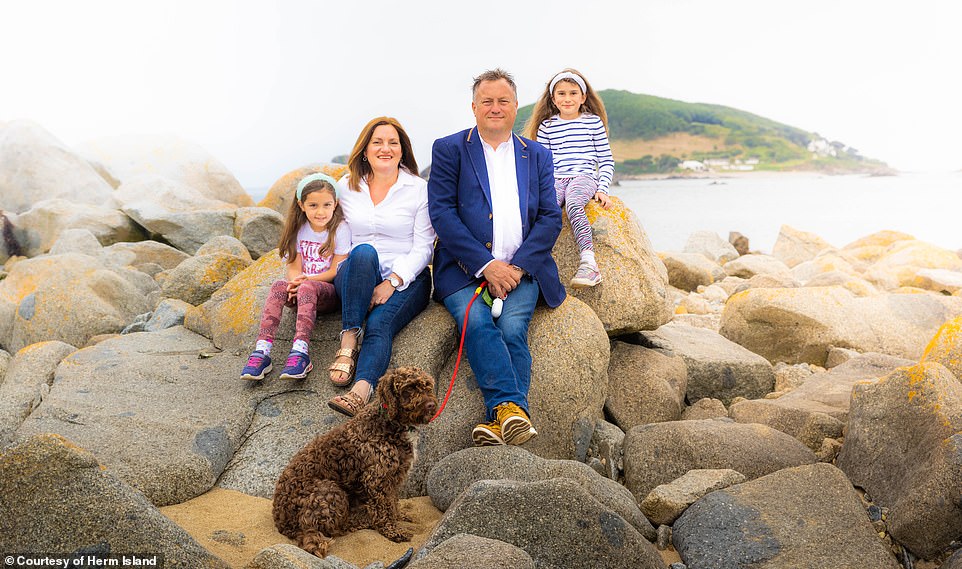 Herm island CEO Craig Senior, originally from Rotherham, pictured here with his wife, Emma, their daughters Megan and Grace, and Harvey the Sproodle

Herm has holiday cottages ‘to suit every size of family, many of which are dog friendly and have views overlooking Guernsey, Jethou and Alderney’

Senior describes the island – which has no cars (staff walk or use quad bikes), two pubs, one hotel, a school with seven children and an 11th-century chapel – as ‘paradise’. And getting the job as like winning the lottery.

But it’s a very serious business for him.

He told MailOnline Travel: ‘I applied for the role of CEO of Herm Island nearly four years ago. Of the 280 applicants, I was shortlisted to the final six and offered an interview in London.

‘Following this, three candidates were invited to visit the island for a three-day interview process, including meeting all the residents and some of the tourists. Simply put, after three very intense days – I won the lottery and moved to Herm with my family in November 2019.

‘We were welcomed very positively. I came at a time when Herm had just begun the process of necessary infrastructure improvements across the island, and in the words of the chairman, they were looking for a positive leader who was sympathetic to the island’s history and culture whilst accepting it had to move into the 21st century.’

Before landing the role of Herm CEO, Senior was based in southwest London in a high-pressure job looking after 30 golf, leisure, and health centres across the UK.

The south coast of Herm has high cliffs, home to Europe’s most southerly puffin colony. This stunning drone panorama image was taken by Flickr user Ningaloo 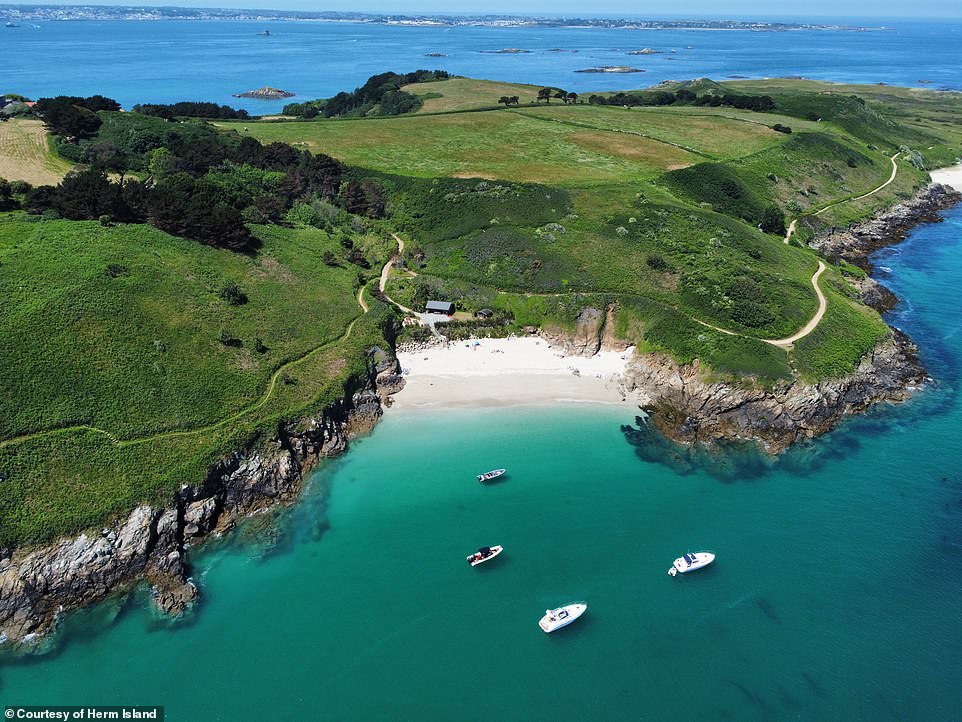 A view of Belvoir Bay on Herm, complete with white sands and azure waters

The island has 20 equipped tents for holidaymakers and a camping village that specifically caters for Guernsey residents, who pitch their tents seasonally

Quite happily, he ditched long daily commutes for a job that involves concentrating on the soil he stands on.

His main role is helping to boost Herm’s income through tourism so that it becomes economically self-sufficient. This, he says, is ‘something that hasn’t been achieved for many years’.

As a result, the island is currently heavily reliant on additional support from John Singer and his wife Julia, who took on Herm’s lease 12 years ago as part of a £15million deal with the States of Guernsey, which act as the landlord.

The couple has a deep love of the island, as it’s where they had their first date, and Senior says that they have done a great job in bringing Herm into the modern era – installing the internet being one of the major achievements – while being mindful that the island ‘doesn’t lose its unique natural charm, tranquillity and beauty’.

The Yorkshireman adds: ‘The good news is that Herm is on track to break even this year, so we are finally heading in the right direction.’

Along with the Singers, Senior manages the relationship with the island’s board of directors and the landlords.

But the most rewarding part of his job is working with the island community, ensuring they are happy and that the island has ‘sufficient investment and care’ so that visitors can fully benefit from its beauty.

‘This is a duty which I feel incredibly fortunate to have been charged with,’ says the father of two. 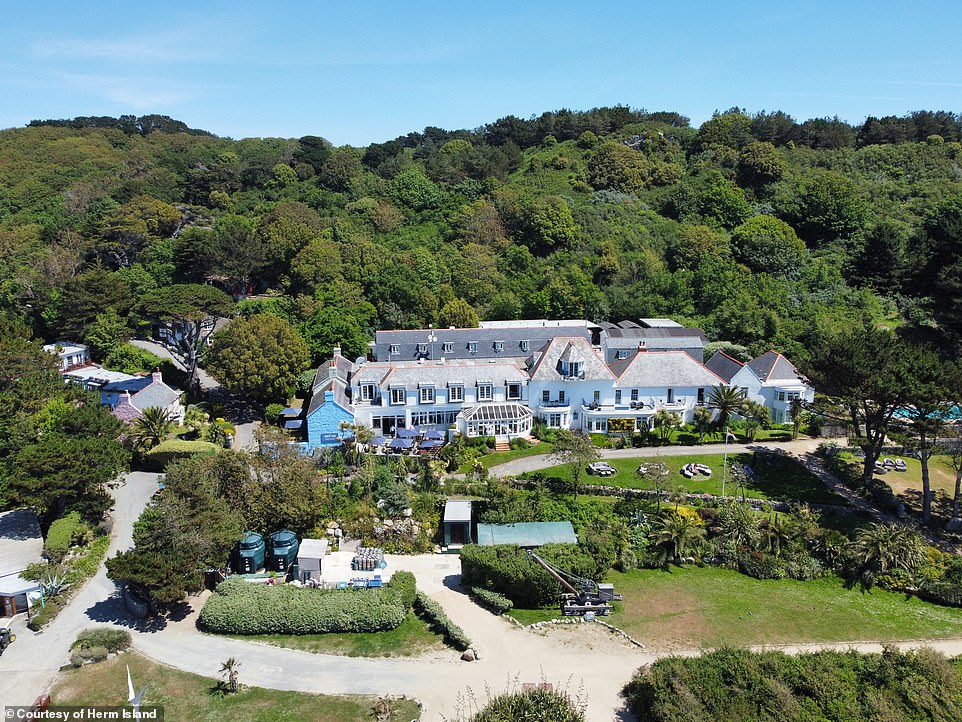 Visitors to Herm can check into the 40-bedroom White House Hotel, which is next door to The Ship Inn

Senior, 52, has adapted to island life like a duck to water, and his family – including Harvey the Sproodle – are also enjoying the change of pace.

His wife Emma, 51, helps with HR and payroll support for the island’s administration office, while his daughters, Megan, eight, and Grace, seven, are pupils at the island’s school.

There are currently seven pupils at the one-room primary school and one teacher. Once a week they nip over to Guernsey to mix with another school, and sailing and trips to the beach for swimming are part of the curriculum.

‘They have an unbelievable lifestyle,’ Senior says. ‘My two young daughters have never been so happy, enjoying the freedom, safety and space that Herm offers.

‘And I enjoy the walks and walking with Harvey.’

There are no houses for sale on Herm – the Seniors moved into one of the properties reserved for those working on the island. 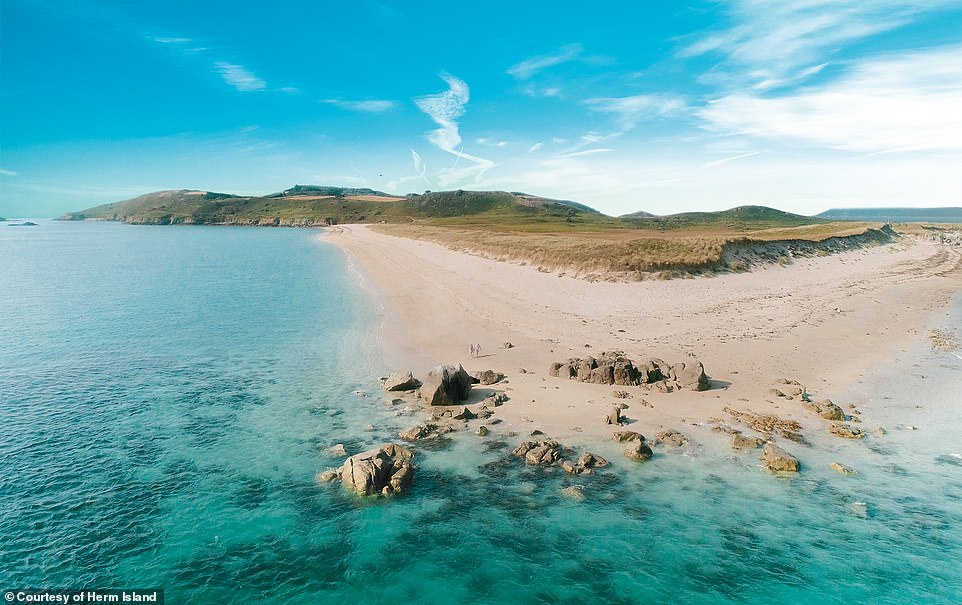 Avid walkers can circumnavigate the island in half a day, stopping off at some of the ‘most unspoilt beaches in Britain’ 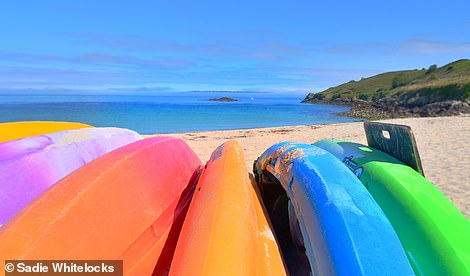 To explore the island’s coast from the water, visitors can hire kayaks from Shell Beach or take a private tour

There are around 70 residents all year round, the number swelling to 150 during the busy summer season. Roles advertised on the island include plumbers, electricians, builders, estate management and hospitality staff.

Asked what the most difficult thing about living on Herm is, Senior says the isolation, a double-edged sword proving especially tough during the pandemic.

The island – which remains Covid-free – went into lockdown twice, first from March to June in 2020 and again from January to March of this year.

During this time, all the necessary supplies, from medicines to groceries to fuel, were shipped to Herm from Guernsey, which is three miles away.

All the goods were sanitised before being dropped off and the boat crew weren’t allowed to step onshore.

In a bid to support local fishermen, Senior stocked up on fresh catch and found living on a Robinson Crusoe diet on Herm wasn’t too bad, with lobster dinners almost every night of the week.

‘I was saying at one point “no more lobster!”‘ he chuckles.

After exhausting all the activities on the minuscule island, from hiking to puffin-watching, Senior says the residents turned their efforts to sprucing the place up during the lockdowns. 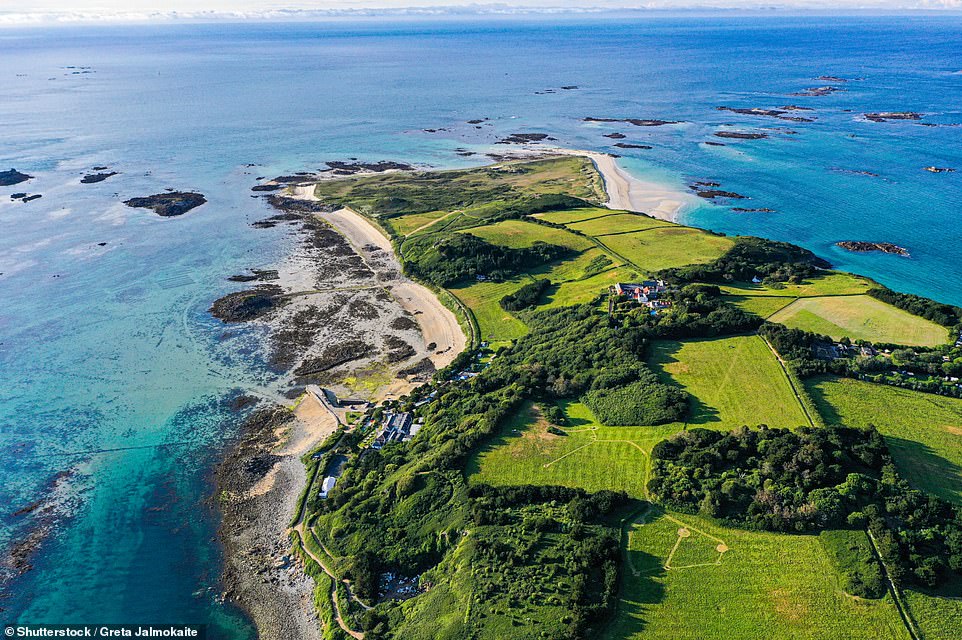 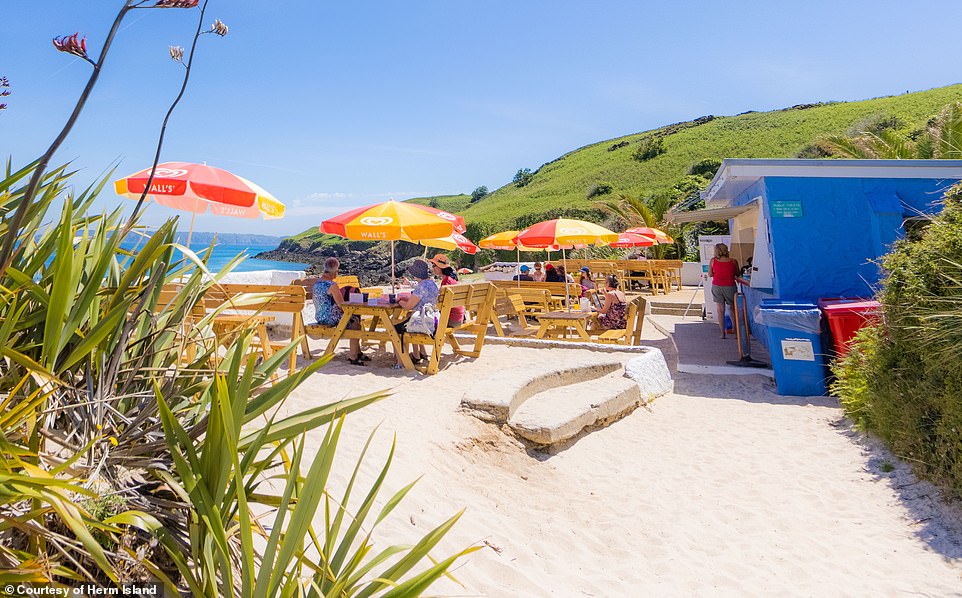 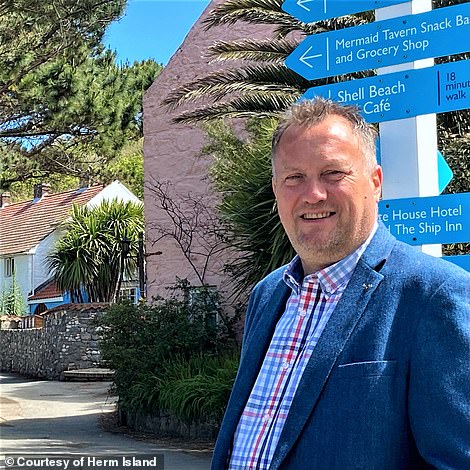 Before landing the role of Herm CEO, Senior was based in southwest London in a high-pressure job looking after 30 golf, leisure, and health centres. Now his job involves concentrating on the soil he stands on

They went about refurbishing the lounge of the island’s sole hotel – The White House – for the first time in almost 20 years, refurbishing six holiday cottages, creating new woodland walks, upgrading the drainage system, and doing ‘lots and lots of decorating’.

Following the various home improvements, Herm reopened to visitors on March 22, with the public ferry from Guernsey running again.

So, for those planning to visit, what are the highlights of Senior’s ‘office’?

Avid walkers can circumnavigate the island in half a day, stopping off at some of the ‘most unspoilt beaches in Britain with soft white sand and clear blue water where you can swim and kayak’, and where the kids can explore rock pools.

In the centre of the island is a vast grassy common where Neolithic settlements have been found and the south coast has high cliffs, home to Europe’s most southerly puffin colony.

After working up a thirst, the island has two pubs to choose from. The Mermaid Tavern has a lively atmosphere, Senior says, with ‘sell-out beer festivals’, Sunday roasts with bingo and ‘the best fish and chips outside of Yorkshire by far!’

Meanwhile, The Ship Inn offers ‘more of a bistro dining experience’, with a large indoor dining area, a cosy bar and an outside courtyard for al-fresco dining.

Credit cards can also be put to use in the island’s large gift shop, which is full of knick-knacks and items from summer dresses to crockery. Senior says it’s so popular that special shopping boats bring people over to it from Guernsey during the festive period.

Along with the 40-bedroom White House Hotel, Senior says the island has holiday cottages ‘to suit every size of family, many of which are dog friendly and have views overlooking Guernsey, Jethou and Alderney and some of the best sunsets you’ll see anywhere in the world’.

The island also has 20 equipped tents for holidaymakers and a camping village that specifically caters for Guernsey residents, who pitch their tents seasonally.

For guests with mobility issues, there is a four-seater Gator vehicle if required.

Quizzed about his favourite part of the island, Senior plumps for the southeast corner, explaining that from the clifftops there ‘you can see France, Jersey, Guernsey, and the other smaller Channel Islands, and of course parts of Herm’.

His second favourite place, he admits, is his settee. In non-Covid times there can be up to 100,000 visitors during the summer season and he relishes putting his feet up later in the year.

The Rotherham United fan concludes: ‘That is when we as a family can get some quality time and I can catch up on missed box sets from the summer – those days are priceless.’

To learn more about Herm visit Herm.com. Thank you to Flickr users ClaireTurner28 and Ningaloo for permission to publish their stunning aerial images of Herm.