It turns out, there’s a bit of wiggle room when it comes to a “second bag” on Southwest Airlines.

Sydney Fowls, 19, from Columbus, Ohio, tested that theory last month when she checked a pool noodle onto her flight to Florida.

She posted a video of her pool noodle’s airplane adventure on TikTok, which has since been viewed more than 10.9 million times.

The clip begins by showing Fowls handing her suitcase and blue pool noodle over to a Southwest employee who was taking checked bags.

The clip then shows the pool toy being placed on the belt by two Southwest employees who were loading other luggage and suitcases onto the plane.

The two employees appear confused by the unusual item that they loaded onto the plane.

The clip ends by showing the noodle in baggage claim, riding around the carousel.

Fowls told FOX 13 that her cousins — who she was traveling to Florida with — had told her to check the pool toy. At first, she said no, but when they offered her $20 to do it, she agreed.

However, she was surprised that Southwest allowed her to do it.

“At first I was like, Southwest is never going to let me check this, they’re going to say, carry it on with you,” she told the station.

In a follow–up video posted on TikTok a few days later, Fowls gave her “top 3 reasons” why she decided to check the toy.

Her top reason, according to the clip, was that she was given $20 for doing it.

“It was a $20 bet!!” Fowls wrote in the clip. “As a broke college student who is an education major… I just couldn’t resist.”

Over a picture of the Southwest Airlines’ baggage policy web page, Fowls explained her second reason for checking the noodle.

“I DID NOT have to pay to bring my noodle,” she wrote. “2 bags fly free (My noodle was considered my second bag).”

Her third and final reason was also money-related, albeit a joke. 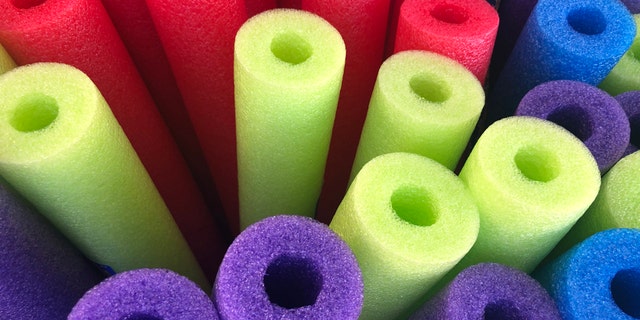 A college student from Ohio checked a pool noodle as her free second bag on a Southwest Airlines flight to Florida. The video she posted about it on TikTok has gone viral. (iStock)

“I am aware that I can buy a pool noodle in Florida….. But dang are they expensive!” she wrote.

The caption was written over a picture of other pool noodles at Walmart with a price sign that appears to say they cost $228 — though they more likely cost $2.28.

However, that wasn’t the end of the pool noodle adventure.

In a third video, Fowls showed her noodle’s journey back from Florida, captioning the clip: “My pool noodle made it back home to Ohio! Thank you Southwest Airlines for everything you did for me!”

My pool noodle made it back home to Ohio! Thank you Southwest Airlines for everything you did for me! @flysouthwest @junebug2433 ##viral

In the clip, Fowls shows that the airline gave her a decorated “Southwest Pool Noodle” while she was still in Tampa, Florida. Then when her plane arrived in Columbus, the clip showed Southwest employees waving pool noodles to welcome Fowls and her pool noodle back as the plane came down the runway.

Southwest even had a surprise for Fowls in baggage claim.

“The amazing Southwest employees filled the baggage claim with pool noodles and beach balls to show their appreciation for my video,” Fowls wrote in the clip, showing off the beachy decor.

Fowls was even able to meet the two employees who she filmed loading the pool noodle onto the plane.

“My pool noodle made it safely back to Ohio and made some friends on the way!” Fowls wrote with a picture of the two employees.

checks, noodl, ohio, pool, student
You may also like:

Family-run hotels passed down the generations that critics still love

Argument over elbow placement forces plane back to gate, gets 2 men booted: report

US wants to fine Air Canada $25.5 million over slow refunds to travelers