A peace of heaven: Quiet village in the Lake District with one pub and no shops is named as the most tranquil staycation spot in the UK

Nestled within the Lake District, the village of Bassenthwaite may not be the go to stop while touring the national park.

With a population of less than 500 people, it has just one pub and not a shop in sight. But that appears to be working in its favour as it has been named the most peaceful destination in the UK.

It has topped a list of over 50 staycation locations judged on factors including the number of people posting about it on social media, the destination’s population, the amount of hiking, bird watching, and fishing trails and the crime rate. 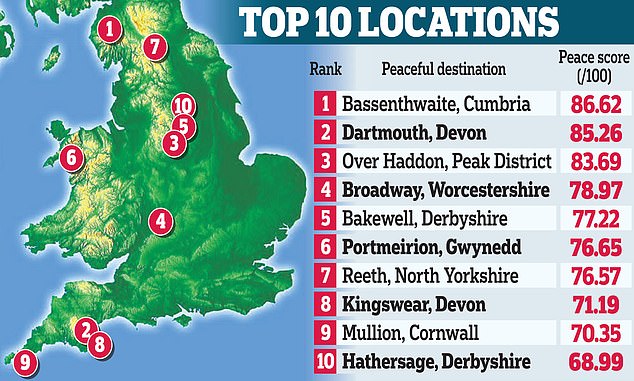 The Cumbrian village counted the fewest number of Instagrams hashtags – just 100 – which saw it rated a ‘hidden  gem’.

The list gave Bassenthwaite an overall peace score of 86.62.

Lying in the shadow of Skiddaw, the sixth-highest mountain in England at just over 3,000ft tall, the village leads to over 39 hiking trails and sits off the shores of the four mile long Bassenthwaite lake.

However, it does have a surprisingly high crime rate of 63 per thousand inhabitants.

The list, compiled by CBD retailer Ice Head Shop, placed Dartmouth in Devon in second place while in third was the small Peak District village of Over Haddon in Derbyshire