The demolition of the Salt Lake City International Airport’s old “Delta Tower” was a smashing success. So much so, that the airport shared footage of the structure crashing down on Twitter.

The tower, also known as the “terminal 2 ramp control tower,” was demolished on Monday as part of the air hub’s latest redevelopment phase, to meet changing traffic, security and safety requirements. Under Phase II of redevelopment, obsolete buildings and facilities will be replaced to conform to the latest safety standards, among other projects. 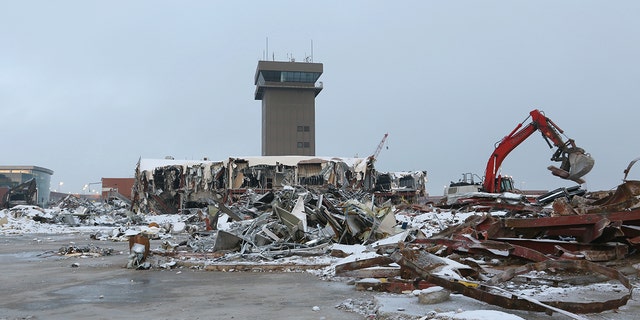 The tower, seen in the background of this January photo, was originally built between 1989 and 1990.
(Salt Lake City Airport)

The Delta Tower was originally built between 1989 and 1990 for use by Delta Air Lines, to direct the carrier’s own planes to their gates after landing. Delta has long been the largest operator of flights to and from SLC, according to the airport.

“The tower, which stands at 84 feet high, continued to operate until The New SLC opened on Sept. 15 and the replacement Delta tower became operational,” reads a press release issued ahead of the demolition.

Footage of the event, taken by Avalanche Studios from inside the airport’s Delta Sky Club, shows the control tower coming down at approximately 12 p.m. on Monday.

The demolition marked what SLC is calling a “major milestone” in the timeline of Phase II of its redevelopment program. Phase I was completed in Sept. 2020 and Oct. 2020, with Phase II scheduled for completion in 2024.

A spokesperson for the airport told Fox 13 that development has been expedited in part due to the pandemic, which may reduce projected costs by as much as $300 million. The entirety of the airport’s rebuilding and redesign, which kicked off in 2014, is expected to cost approximately $4 billion.

Airport, city, demolis, Lake, Salt
You may also like: