Stunning holidays you can go on without getting on a plane 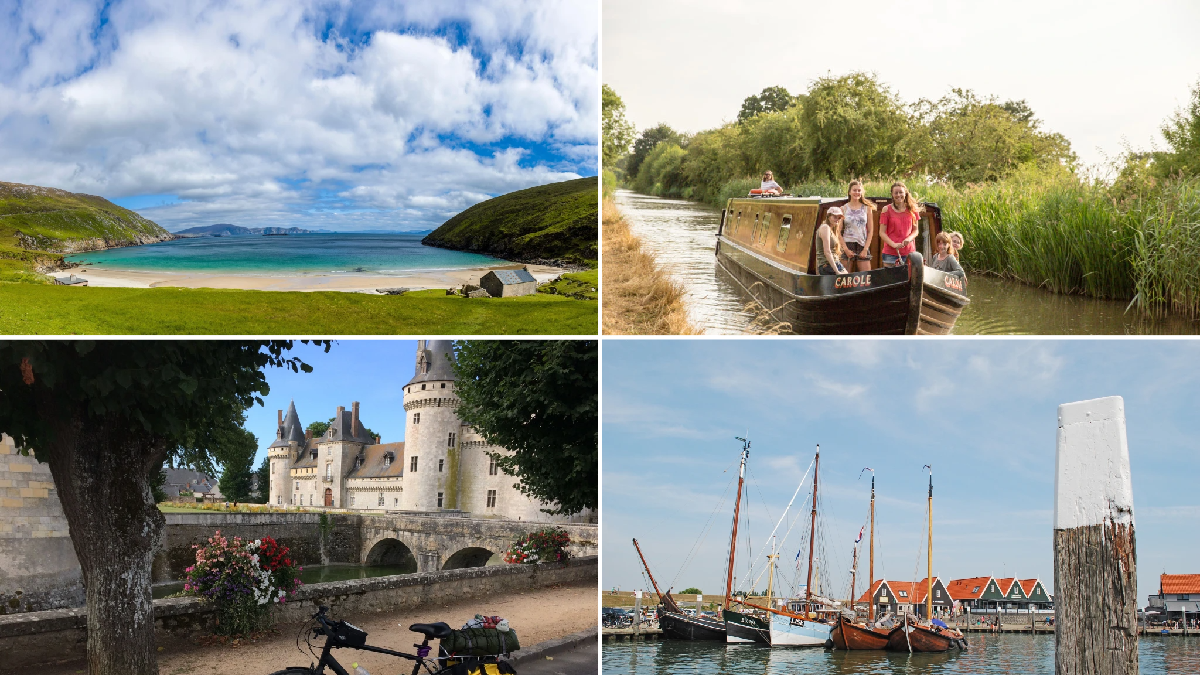 Flying: it’s bad for the environment, the airports are hellish and who knows if you’ll ever see your suitcase again.

So why not choose a gentler way to travel this summer?

Whether it’s by boat, bike or train, there are plenty of beautiful destinations within easy reach.

Read on below for inspiration for your flight-free summer holiday.

Sample some of its most memorable sections on a self-drive tour starting and ending in Dublin, to where ferries connect daily from Liverpool or Holyhead (from £406 return with a car with Direct Ferries).

Staying in local-run guesthouses, you’ll get to see the vast Burren National Park, where grey karst slabs dominate the scene, and have the option of hopping over to Achill’s sandy beaches or the Aran Islands’ prehistoric sites.

Scotland’s Union Canal turns 200 this year and a short narrowboat break packs in lots of fascinating features from its past.

You’ll start at the Falkirk Wheel, the world’s only rotating boat lift, before cruising through the Falkirk Tunnel – blasted out when Callendar House’s grumpy  laird forbade a waterway across his land.

The route then takes in Scotland’s tallest aqueduct en route to ruined Linlithgow Palace, Mary Queen of Scots’ birthplace (Edinburgh is a 20-minute train ride away).

Narrowboating experience isn’t  needed – you’ll receive  a tutorial at the start and there are only a few locks to negotiate.

Four nights from £729pp (diesel costs about £15 per day extra), self-catering for four, plus one dog.

Ride between these once royal châteaux and delightful riverside towns on a week-long self-guided cycling tour.

Part of the long-distance Loire à Vélo route is included and you can stop on impulse for tastings at small wineries or fill your pannier with cheeses from farmers’ markets. Good-quality hotels are used throughout.

Book via Cycling For Softies.

Dutch- and German-owned, the Frisian Islands, also known as the Wadden Islands, are part of the wider Wadden archipelago, which extends into Denmark. Largely car-free, those within the Netherlands are separated from the mainland by mudflats.

Then comes the main isle of Texel, your base. Sunbathe on one of its wild, dune-backed North Sea beaches and cycle to the symbolic red lighthouse, then sail to remote Vlieland for woodlands, visit a beachcombing museum or meet wounded seals at the Ecomare wildlife sanctuary.

Five days from £631pp, B&B, including return trains from London.

The train-tours company Tailor Made Rail ceased selling any European holidays with flights earlier this year.

Its privately-taken trip to Slovenia travels out via a night in Munich and stops on the way back in Heidelberg, staying close to its handsome riverside stronghold. In between, you’ll spend four days beside large Lake Bled, which is eye-poppingly framed by forested slopes and snowy Julian Alps.

Sealing the deal for photographers is a twee island church and, on a precipice above the north shore, medieval Bled Castle – another fairytale fortress.

Book via Tailor Made Rail.

There are two direct routes to Rotterdam if you don’t want to fly: eight-hour Stena Line car-ferries from Harwich to the nearby Hook of Holland (from £124 return with Stena Line) followed by a short metro ride, or high-speed, three-hour Eurostar services from St Pancras (from £78 return via Eurostar).

Go for trendy eateries (try Putaine’s casual fine-dining and cool cocktails on a floating island), great art hubs as the Depot Boijmans Van Beuningen, a publicly-accessible art storage facility stocking works by the likes of Rembrandt and Rubens, and design from cube houses to carbon-positive towers.

Including on-sale, in-room artworks, Supernova is a cool, convenient base.

Byway’s tailor-made breaks to north-eastern Spain pause overnight in Paris before continuing onwards by train to Girona, a Spanish city famed for its cheffy scene.

A day in Barcelona follows next on the suggested itinerary, allowing ample time to walk La Rambla or goggle at La Sagrada Familia ahead of stops in the upmarket beach resort of Sitges and port city of Tarragona, whose outstanding Roman amphitheatre overlooks the Mediterranean.

The return journey utilises a different route, alighting in ancient Avignon within walking distance of its famous unfinished bridge.

Perfect for toe-dipping cruise virgins, it features the Edward Elgar, an 88ft-long, three-deck hotel boat hosting up to 22 passengers, and ventures south from Gloucester’s elegant Victorian docks to shadow the Severn Estuary.

In between, sip pints of Gloucester Gold on the roof deck as locks and low meadows slip by. Evenings blend bingo games or concerts with good food.

Two nights from £360, full board, including entrance fees and wi-fi, departing October 21 and 28.

Which airline should I fly with?

In terms of evading potential hassle for the time being, it makes sense to avoid the airlines that have been most affected, which include easyJet and BA, and, to a lesser extent, TUI and Wizz Air.

Jet2.com and Ryanair will take you to most of the popular short haul holiday destinations in Europe, while for long haul, Virgin Atlantic, Emirates, Cathay Pacific and Qantas cover most places in the US, Middle East, Asia and Australia.

Worst affected airports include Gatwick, Manchester, Heathrow –
which has announced a cap on departures of 100,000 passengers a day, and told airlines to stop selling summer flight tickets – and Bristol.

So aim for smaller airports such as London City, Stansted, Glasgow or East Midlands.