Follow
Home » Travel » Sun, sea and shenanigans: What it's like to go on a Croatian party boat

Sun, sea and shenanigans: What it's like to go on a Croatian party boat

Picture me, a teenager from Oxfordshire, standing (shirtless) on the edge of a busy motorway bridge in the middle of Dubrovnik, high above the Adriatic Sea. I’ve been told not to look down so I’m trying hard not to.

I look down. OMG!

It’s surreal that just five hours ago I was being dropped off by my parents at Gatwick Airport on route to a VIP Navigator Cruise with Sail Croatia. 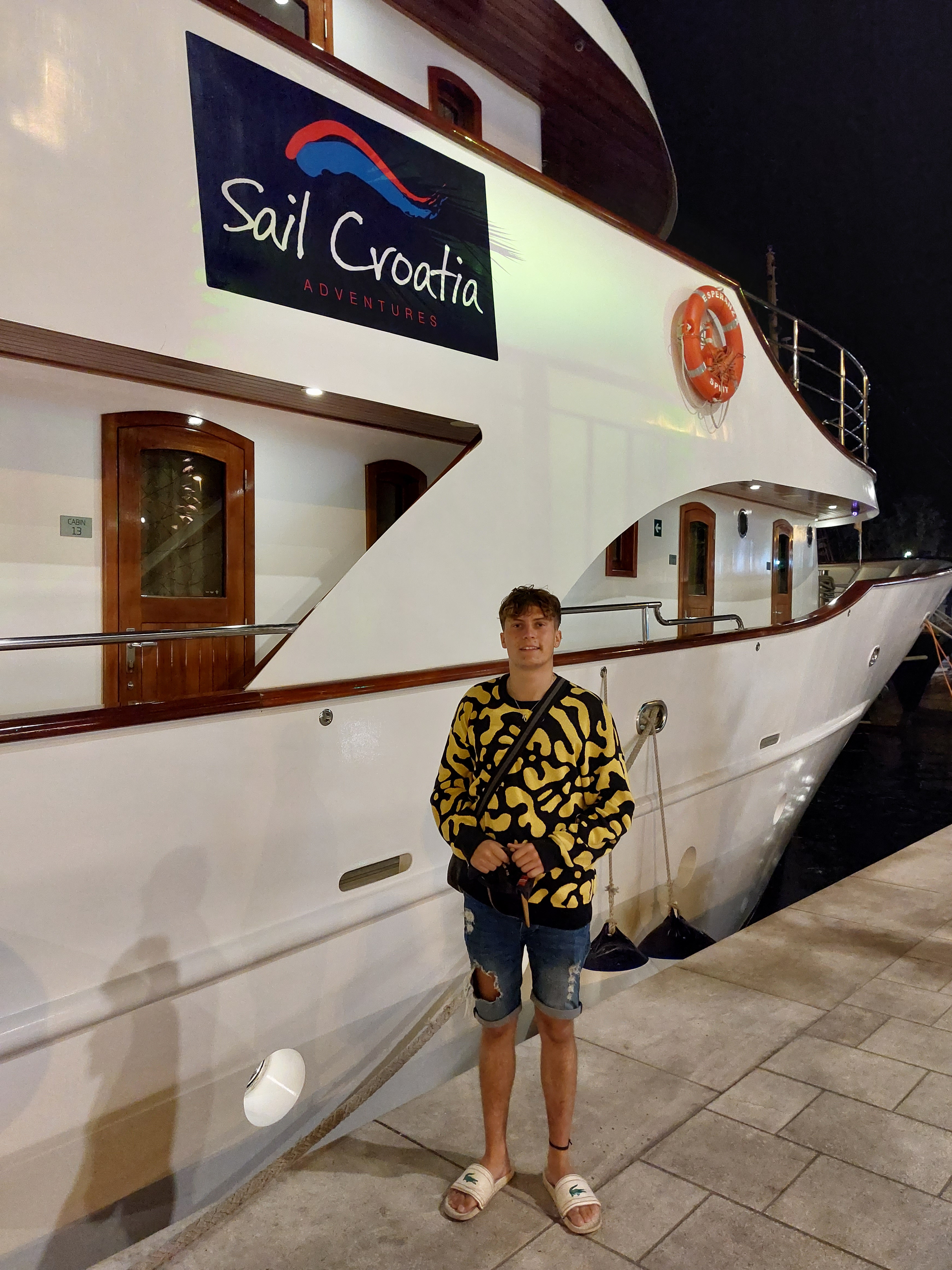 It’s even more surreal to think that I’m on a cruise ship – something I never imagined would appeal. But this is just day one of the seven-day cruise and I’ve already ticked the scariest thing off my bucket list.

After two years in pandemic purgatory my mates all talk about festivals and boozy clubbing trips to Greek resorts. But instead of spending cash on a relentless Groundhog Day experience of sun, booze and shenanigans, I join an organised tour, setting off solo, to combine partying with culture and exploration.

I’ve been hoping it will be fun but I wasn’t expecting to have the time of my life and to make friendships with wonderful people from all over the world.

Our cruise takes us from Dubrovnik up the Croatian coast to Split, via party stop-offs on the islands of Mljet, Korcula and Hvar, toward Stari Grad. Sightseeing includes swimming in lakes or the sea, jumping off bridges, cycling, hiking and discovering the area’s history and culture. Then there’s the clubbing at  night – of which more later.

Our home for the week is the Esperanza, a 46m-long motor cruiser with 19 cabins. The ship is a VIP model so I sleep off my hangover each night in a luxury air-conditioned en suite cabin.

For a third of the price you can take the same route and party on a standard ship, sleeping in bunk beds and using small, shared bathrooms, but I’m grateful for the VIP water pressure in the shower and the flushing loo.

With only 15 guests on board, we bond immediately and became a kind of dysfunctional – but very happy – family. Navigator cruises has an 18-39 age bracket and our gang ranges from American firefighter Jake (twice my age but on a mission to party me into the ground) and a Kiwi sheep-shearing couple to two Bali-based influencers and a handful of Aussies.

Six of us are single and although I am the youngest on board, I definitely don’t feel it.

Tour mum is Kalmia, the official host (and the only other Brit), who is absolutely brilliant, always calm and understanding even when I am late (which happens a lot). She picks up the pieces when I accidentally crash an off-road buggy into a wall and keeps her cool when we swim across the harbour in our undies in a stealth mission to steal an inflatable unicorn from another ship.

Each morning kicks off with a continental-style buffet breakfast featuring eggs made to order. The party gang surface at about midday as the ship pulls into bay for the daily ‘swim stop’.

Leaping off the roof into chilly Mediterranean water is the best way to kick a hangover into touch.

Lunch is a three-course affair – the best food I’ve ever eaten in my life! Each meal is a work of art with fish or steak piled on vegetables and garnished. This is a VIP bonus, as guests on standard cruises get simpler fare. Guiltily, there are days when I hanker after good old-fashioned carbs to soak up the alcohol.

Incredibly, the on-board bar is never closed and, thanks to a clever tab system and a daily happy hour, the chilled beer and exotic cocktails always seem easier, cheaper and tastier on the ship. My week of enthusiastic drinking only sets me back about £100.

Each evening we have ‘pre’ drinks onboard then walk into town for dinner. Although the couples on the cruise intersperse wild nights with quieter evenings on the quay, I become part of the hardcore singles gang, which staggers back to the ship in the early hours, debriefing on antics as we unwind in the top-deck jacuzzi.

Now I’ve got heartfelt invitations to visit my new mates, including the Aussie couple who confide in me that they’re going home to start a family.

Maybe I’ll go see them one day. Maybe I’ll even get there on a cruise ship.

A spectacular club on its own island just off the coast of Hvar. The DJ sets are theatrical, with orchestrated strobe lights and flamboyant dancers and musicians. It cost £30 for the water taxi and entrance fee but it’s worth it.

A relaxing contrast to the partying: we learn about Croatian wine, taste plenty, nibble on charcuterie, snap selfies with donkeys and marvel at a spectacular sunset. Free with the VIP package.

Zipline across the Mountains of Cetina

Ziplines take you whizzing across the top of gorges up to 150m above the ground. It’s £50 but an exhilarating way to take in Croatia’s beauty, best experienced without a hangover.

A large natural cave next to the sea near Split that is transformed into a uniquely atmospheric cafe and nightclub. It’s an incredible way to end the holiday and the entrance is free (always a bonus!)

A choice of entertainment: bungee or Game Of Thrones walking tour. As the only person left alive who hasn’t watched the show, I pick the former, but the others say King’s Landing is fab.