Swimming in an Uncertain Sea

In the muffled quiet, a steady inhale-exhale. A shadow, then a flash of silver. Then the elusive subject of fascination makes its silent, gliding approach, emerging in full: the great white shark.

When the underwater filmmaker Ron Elliott dives beneath the surface, this suspended moment of magic is what he’s after.

I first met Ron more than a decade ago, several years after he had begun documenting the undersea world of the Farallon Islands, the remote, saw-toothed crags some 30 miles off the coast of San Francisco. The Ohlone people called them the Islands of the Dead; 19th-century sailors called them the Devil’s Teeth. The Farallones sit at the western point of Northern California’s “Red Triangle,” where large numbers of great white sharks come to feed on seals and sea lions in the fall and winter months. 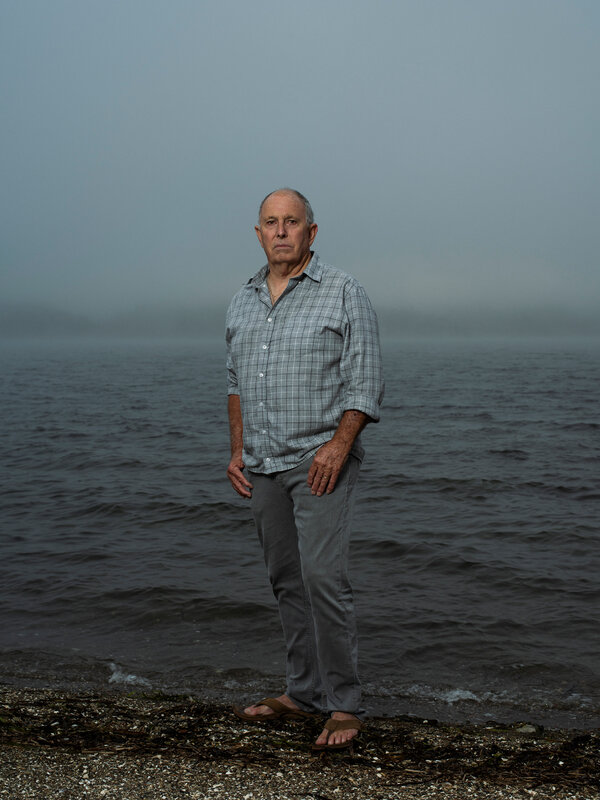 A former commercial sea urchin diver, Ron made the transition from fisherman to filmmaker around 2005, when he discovered that he liked observing the sharks in this isolated patch of open ocean more than just about anything else. He became friendly with the shark researchers stationed on Southeast Farallon Island, providing them with novel, in-the-wild footage of the shark population. There, underwater, he finally found calm and quiet beauty. It became his adopted ecosystem.

But in October 2018, he was bitten by a 17-foot female shark, nearly losing his right hand and forearm in a hair-raising encounter that reverberated around the diving world. A year later, after multiple surgeries and many grueling hours of physical therapy, he got back in the water.

Over the course of our friendship, I’ve coaxed Ron up onstage to talk about his longtime fascination with the Farallones; a few months ago, I even wrote a book about him. The unusual pull he feels to swim toward sharks — instead of away from them, like the rest of us — is something I’ve always wanted to understand.

He originally came to diving as a balm for his brain. “For the mental aches and pains — it was kind of like taking ibuprofen, for my mind,” he said recently. He got sober from drugs and alcohol in 1975, and discovered diving shortly thereafter.

In other words: Right around the time that “Jaws” was colonizing the American psyche, Ron was swimming against the current, as an urchin diver along the California coast. (He is one of the few people to dive around the Farallones without a protective cage.) The whales cruising by, the blooming clouds of krill, the long tendrils of a jellyfish trailing off into the inky dark. He loved all of it. The sharks were inquisitive, but as he learned to handle himself in the environment, they left him alone. Fear didn’t enter the picture.

In time, Ron began sharing underwater photographs and videos with his family, with local shark scientists and eventually with the likes of researchers with National Geographic, the Discovery Channel and the National Oceanic and Atmospheric Association.

Now that all of us are trying to get back in the water, so to speak, I asked Ron to share a bit of his remarkable body of work, and to talk about what he’s learned from his time in the ocean.

Our conversation has been lightly edited for clarity and length.

First and foremost, how did you overcome fear to dive with these awesome apex predators?

When I first started diving with the sharks, I had a sense of invincibility — that I’d be OK with whatever happened. And I still have this feeling to a certain extent, when I’m only thinking of myself, and not my wife and family. I’m in the moment, and I don’t think of anything else. Even though I had been in certain situations that were scary, I challenged myself to be in the now and observe the enormity of sharks and what they do.

How did filming the sharks change your outlook?

Once the idea of bringing a camera down popped into my tiny brain, I realized I wanted to show people the incredible things I saw. I started to think that my family would want to know what I was doing down there. I had always kept it inside. Sharing what I saw — with family, scientists and researchers — taught me how to open up a little.

I’m a visual person. When I worked with other people, when I revisited the video at home, I got to appreciate it more. I could look at it in slow motion and really take it in. It would transport me back. I could see it in a different way. So that was very comforting.

You’ve talked about how spending time with the sharks and going over the footage got to be a kind of therapy.

Yeah, it did. I depended on it. It was a big motivator for me. It gave me something to look forward to, staying close to the water.

The accident didn’t seem to do much to your sense of invulnerability at first.

Oh, I was ready to get back in the water. Right from the get-go. The doc was shaking his head. I was really thinking that I was going to be able to do it quickly. It kept me going — through all the surgeries and the rehab.

Also, since the shark made off with my 4K camera, I really wanted to see if I could find it.

But your sense of invulnerability began to change this last year.

I’ve been very lucky over the years with bumps and buzzes. But going through these surgeries, the physical therapy, the rehab, in this pandemic — it has been very time-consuming and stressful. The amount of effort you put in, when it comes down to it — that good feeling I had from diving was going away. And I’m thinking about Carol, my wife. She’s never told me to stop diving. She knows how important it has been to me. But I’m not as selfish anymore. It has become more of a relationship-type decision.

How has your relationship with diving in the Farallones evolved over the last three decades?

In the early years, it was very rare that things ever felt truly dangerous. I just didn’t have those kinds of interactions with the animals. What did change over the last several years is that the sharks started behaving a little differently with me. There were more encounters that felt close to something confrontational. I don’t know if it has to do with changes in the ocean — climate change affecting everything, the purple urchin completely taking over the sea bottom, more people cage-diving — or if it’s me.

Helping my researcher friends with the science and conservation work has become really important to me. But do I actually bring a negative effect to the sharks if I get in an accident again? That kind of thing is always going to be sensational, because people have such a fear. Is it being selfish on my part, is it detrimental to the animals? I don’t want to add to that.

I see the sharks and I actually think they’re doing well. They’re thriving, even though their habitat has changed. [Warming waters have helped expand the geographic range of great white sharks along the California coast.] Me being a part of their habitat has changed, though. I feel a little bit out of place; I don’t view it the same. I had this ecosystem for a while, I was a part of it. Now I don’t feel like I belong there in the same way anymore.

What have the sharks taught you about being human?

Even though it’s sharks in this case, we could be talking about a relationship with anyone or anything in life. It started out being about me, in a naïve way — what I got out of things. There’s an evolution over time, in which you take into perspective everything and everybody involved. Life changes. Eventually you do have to change. Not everything is the same forever.

You have to adapt and change, and care for the other people who are there — or the experience of life really ends. It gets smaller.

Bonnie Tsui is the author of “Why We Swim.” Her new book about Ron Elliott is “The Uncertain Sea.”

fish, Oceans and Seas, shark, tra
You may also like: