Follow
Home » Travel » Taking it slow in Costa Rica, one of the happiest countries on Earth

Taking it slow in Costa Rica, one of the happiest countries on Earth

Taking it slow in the land of the sloth: Encountering an abundance of wildlife during a leisurely trek through one of the happiest countries on Earth

Hanging from one arm, a three-toed sloth is asleep in a tree in Tortuguero National Park, on the north-east coast of Costa Rica. ‘It was likely climbing higher,’ says our guide, ‘then nodded off on the move.’

Sloths, we learn, sleep for up to 20 hours of the day, turning narcolepsy into an art form. This cute, sleepy mammal has become the pin-up for Costa Rica tourism and it’s what visitors are most keen to encounter.

Costa Rica, sandwiched between Nicaragua and Panama, is ranked as one of the happiest countries in the world – so peaceful that its army was dissolved 70 years ago. Just like the habits of a sloth, this is a country to explore at a slow pace. Here you are encouraged to appreciate nature in an unhurried way and learn from the unusual mammals, reptiles and birds that call Costa Rica their only home.

From the moment you land, the cry of ‘pura vida’ (pure life) is heard – used as a greeting, a substitute for thank you and a replacement for cheers. So if you learn only two words in Spanish, make it these. 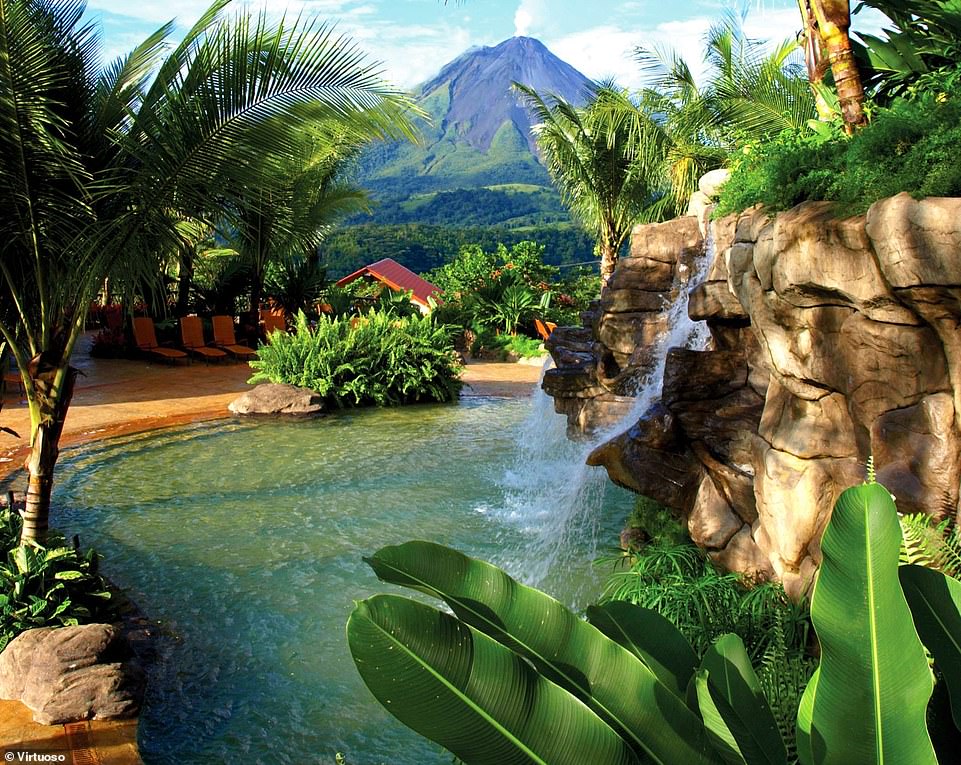 Kate Wickers explores the breathtaking landscapes and stylish hotels of Costa Rica. Above is The Springs Resort & Spa, which looks out to Costa Rica’s youngest and most active volcano, Volcan Arenal

Flights from Europe tend to arrive in San Jose in the afternoon, so a night in the capital makes sense. Hotel Grano de Oro (hotelgranodeoro.com) gives a hint of what beauty lies beyond the city in its flower- and palm-filled courtyards, and an evening spent in the refined restaurant (try the roast pork with yucca croquette and tamarind sauce) is a civilised way to cast off the jet-lag before your adventure begins.

From the capital, it’s a two-and-a-half-hour drive to La Pavona, your gateway to Tortuguero National Park – known as the Costa Rican Amazon – with 11 habitats to explore, including rainforest, swamps and mangrove. It can be accessed by boat and less frequently by small plane. Arriving by river is best because it provides the chance of spotting an abundance of wildlife, including green iguana, sloth and anhinga – a cousin of the cormorant that has a startling blue ring around its eyes.

Tortuga Lodge & Gardens (tortugalodge.com) is a luxurious eco-lodge that sits in isolation on the banks of the Tortuguero River. Rainforest provides the backdrop for stylish plantation lodges painted in vibrant hues of pink, blue and yellow. 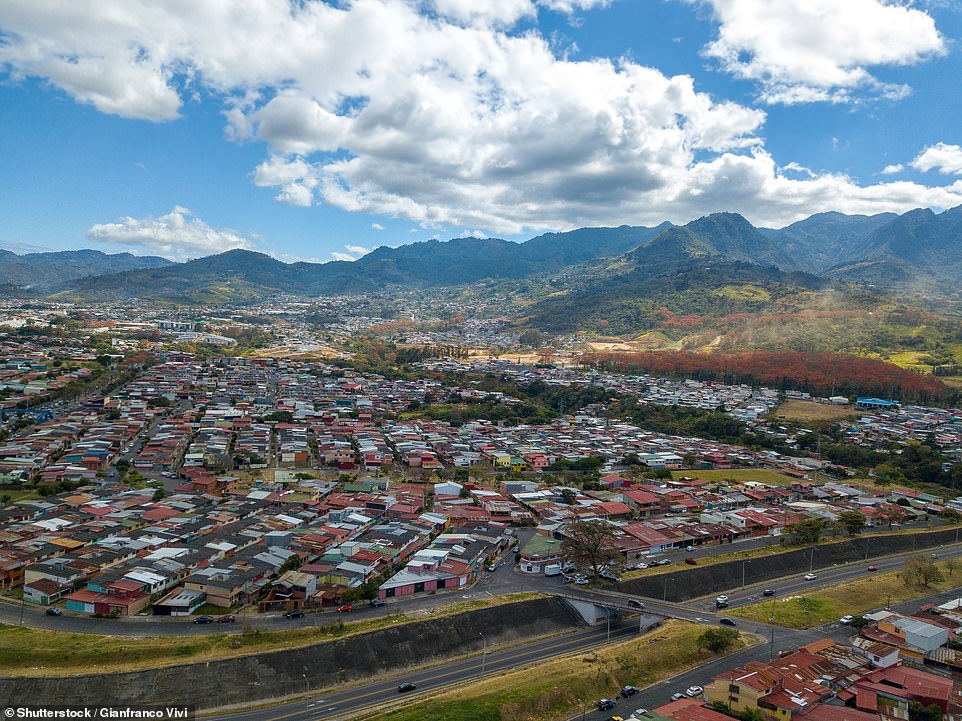 ‘Flights from Europe tend to arrive in San Jose (above) in the afternoon, so a night in the capital makes sense,’ writes Kate 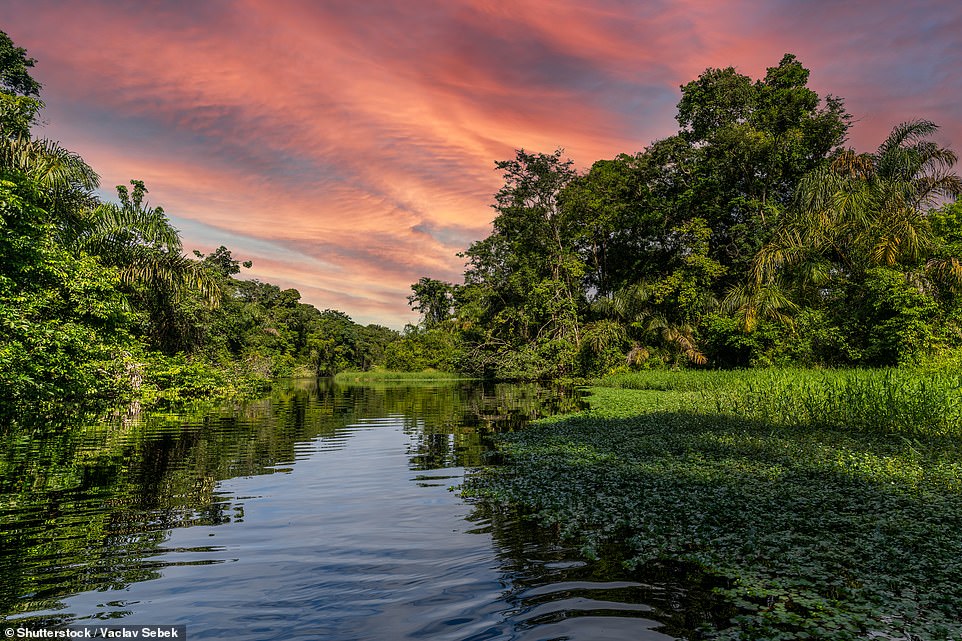 The colonial-style rooms with wooden floors and whirring fans have balconies with large swing chairs and views to the river – the perfect perches from which to marvel over the nature.

Keel-billed toucans raid the nests of smaller birds, montezuma oropendolas fly in and out of long woven nests that swing from palms (once they’re abandoned, local people claim them as decorative homewares), and howler monkeys crash through the treetops. Their deep primeval bellows can be heard for more than a mile.

For a real treat, book the Miss Florentina Villa with its plunge pool and circular wooden deck, often visited by bare-throated tiger herons and kingfishers.

The lodge offers various nature excursions, but to get a toucan’s-eye view of the national park you can begin with a short hike to the top of Cerro Tortuga (turtle hill). Locals believe it acts as a beacon to turtles, guiding them back to their birthplace.

Look out for the strawberry poison dart frogs (only toxic to humans if handled) that litter this mile-long path and spider monkeys that give aerial shows in the highest branches of monkey-pot trees. From the summit you can gaze over a vast rainforest canopy, the purple liana vines the only break in this lush green scene. 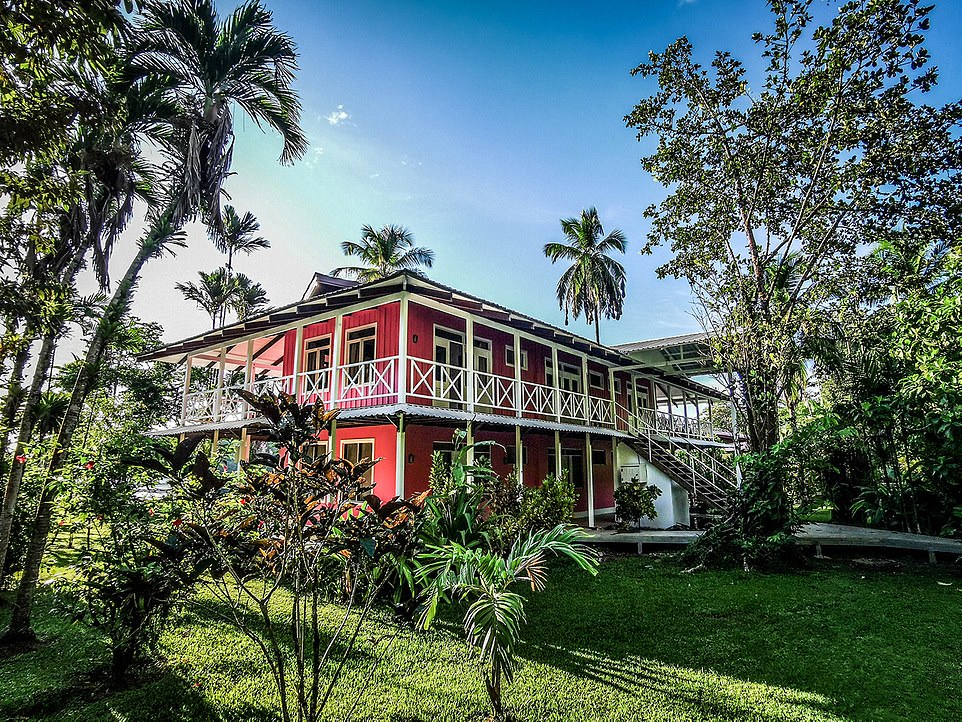 In the thick of it: You’ll discover stylish plantation lodges painted in vibrant hues of pink, blue and yellow at Tortuga Lodge and Gardens, a retreat that’s surrounded by lush forest 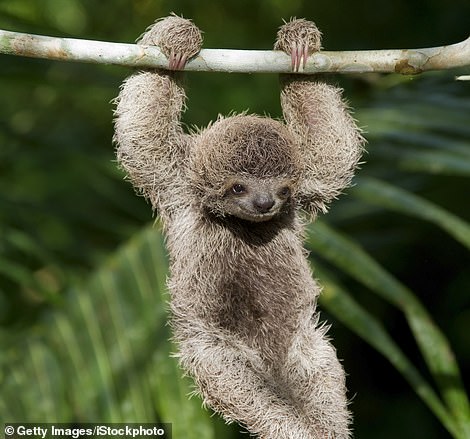 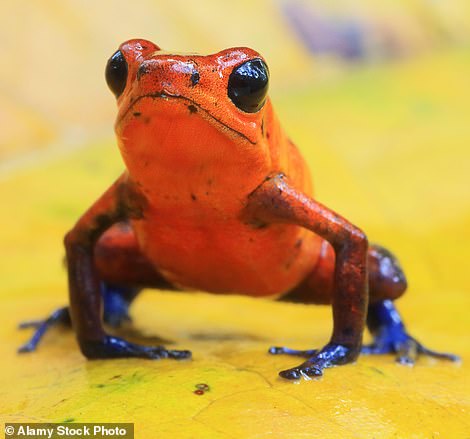 Kate spies a three-toed sloth (left) asleep in a tree in Tortuguero National Park. Look out for the strawberry poison dart frogs (right) that litter the hike to the top of the national park’s Cerro Tortuga (file photo)

A highlight is a trip by kayak deep into the park, where glimpses of otters and sleeping spectacled caiman (of the alligator family) can be caught amid the dense mangrove, ferns and palms. The inky black colour of the water is caused by nutrients leaked by vegetation and creates such perfect mirror images that you feel you are floating in a tropical upside-down world.

Across the river from the lodge lies the Caribbean Sea and a protected beach that is the world’s most important nesting site for the endangered green sea turtle. From July to October, more than 22,000 turtles lumber across the sand to dig a nest in which to lay an average of 70 eggs.

The opportunity to witness this miracle of nature is strictly controlled with limited tickets issued daily, but the moment when the mother turtle appears is breathtaking, and there’s a reassurance to be found in watching her replicate what turtles have been doing on this beach since time began.

The tourist hub of La Fortuna is home to Costa Rica’s youngest and most active volcano, Volcan Arenal. It’s currently quiet – last erupting in 1968 – but the surrounding old lava fields attest to its volatility.

A one-night stay at The Springs Resort & Spa (thespringscostarica.com) gives beautiful views to this sleeping giant, where smoke swirls at the summit – a reminder of what bubbles below. Take a dip in the hot, mineral-rich springs, then swing in the hammock on your private terrace to watch hummingbirds zip from flower to flower in search of nectar. 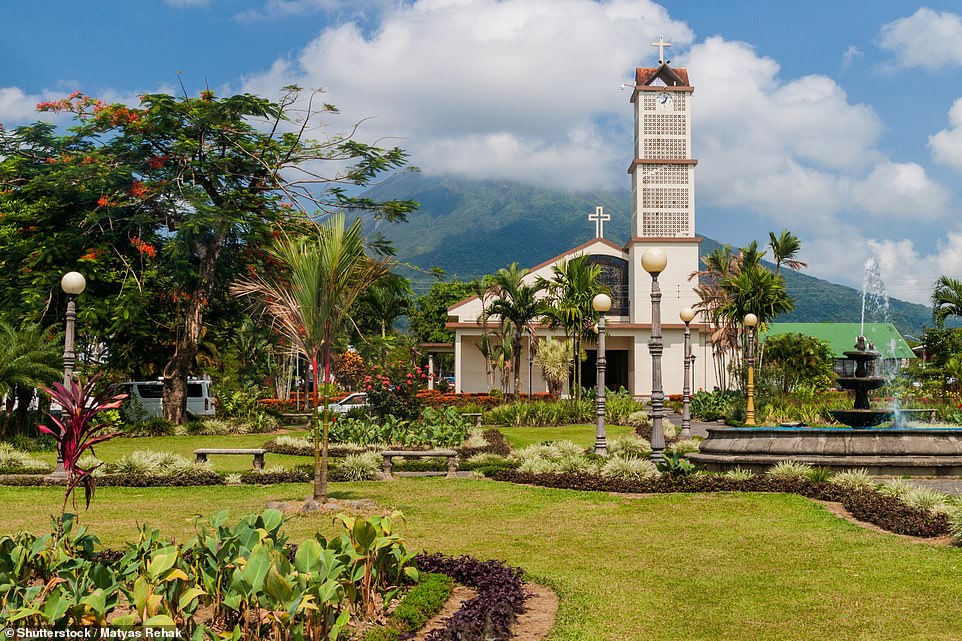 The tourist hub of La Fortuna, pictured above, is home to Volcan Arenal 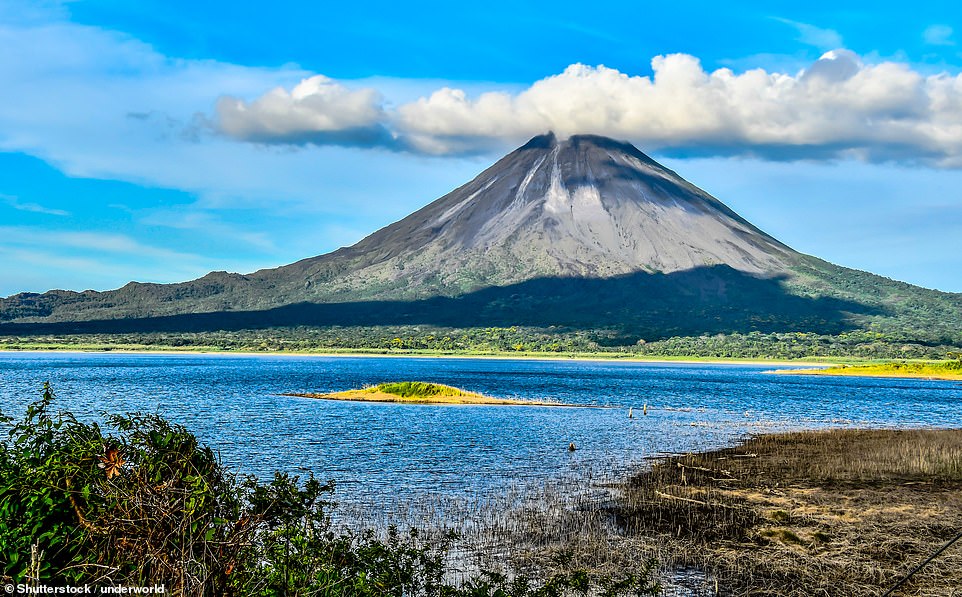 Volcan Arenal is currently quiet – last erupting in 1968 – but the surrounding old lava fields attest to its volatility, Kate notes

If you’re inclined to be as busy, this is Costa Rica’s epicentre for zip-lining and rafting. Not to be missed is the Mistico Hanging Bridges Park – 16 canopy walkways suspended over ravines in primary rainforest, home to sloths and birds such as the emerald toucanet, which gives a distinctive ‘rrip rrip rrip’ call.

It’s a three-hour scenic drive from Arenal to the cooler climes of Monteverde. This cloud forest, at an elevation of 4,600ft, is the most unique of all Costa Rica’s habitats, where orchids and bromeliads thrive on the branches of fiscus trees and where soft mosses and lichen flourish in the moisture-laden climate.

It is quieter than La Fortuna, which makes it attractive for birdwatchers, who come with hopes of spotting the resplendent quetzal, once much prized by the Aztecs for its iridescent green tail feathers.

The Monteverde Lodge and Gardens (monteverdelodge.com) makes for a pretty retreat. Trails dip down to a hillside stream where the air is thick with butterflies such as the large and hypnotically blue morpho helena narcissus, the national symbol of Costa Rica. 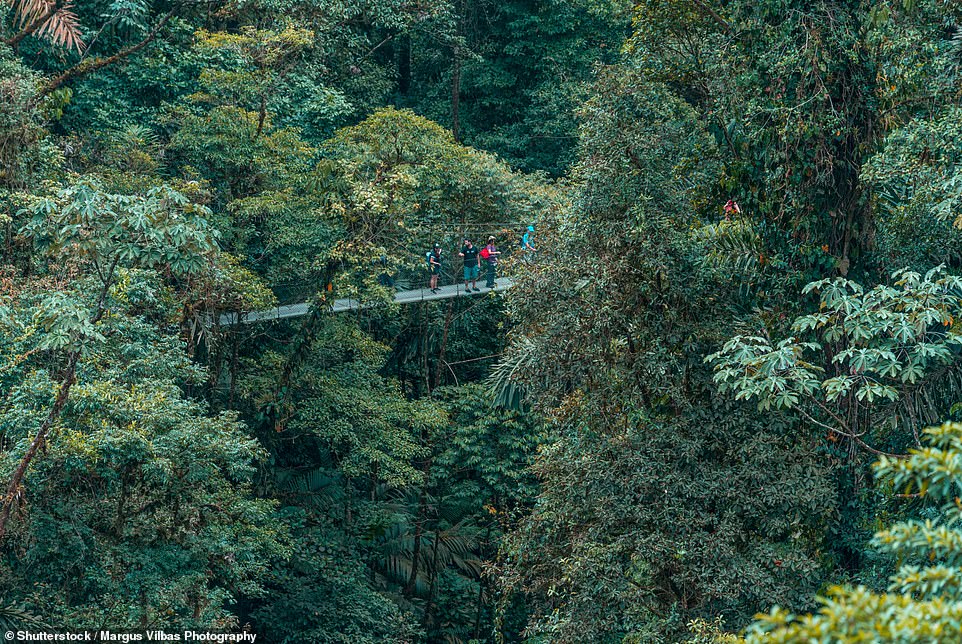 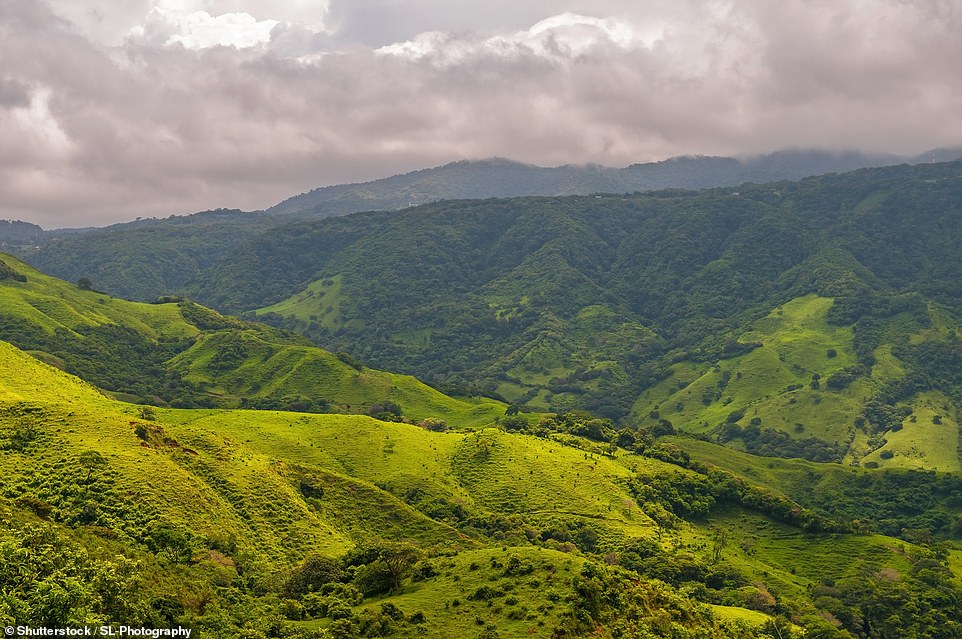 The Monteverde Cloud Forest, at an elevation of 4,600ft, is the most unique of all Costa Rica’s habitats 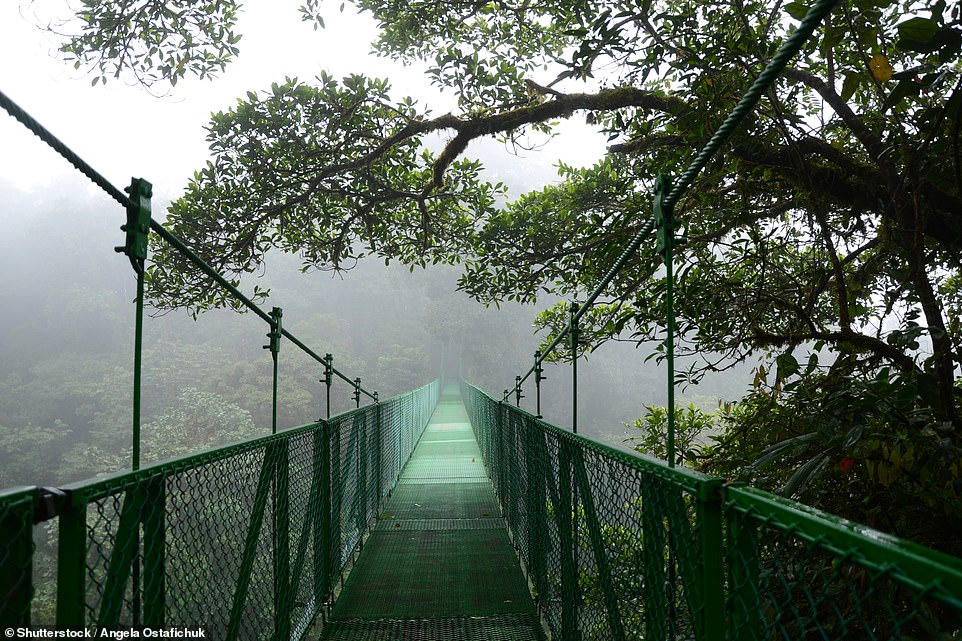 Soft mosses and lichen flourish in the moisture-laden climate of the Monteverde Cloud Forest, Kate reveals

Kate says that The Monteverde Lodge and Gardens, above, ‘makes for a pretty retreat’

Take a guided night walk with Monteverde Experts (book at the lodge) to the Agouti Reserve and seek out orange-kneed tarantulas that stand at the entrance to their burrows in fierce protection of their young. Other highlights include sightings of armadillos, the silver-grey of their armour-like skin illuminated in torchlight.

The horse-riding service, Caballeriza el Rodeo, has been guiding tourists from its finca along forest trails on steady steeds for more than 30 years. For those with experience, there’s the chance of a canter across grasslands, but it’s mainly a slow meander through forest scented with wild ginger and coffee plantations.

A drive from Monteverde to the Nicoya Peninsula takes you through rolling green hills peppered with smallholdings and farms, with views that stretch to the Pacific. Your first lungful of salty sea will come at Santa Teresa, a small town famous for its reliably powerful surf breaks. 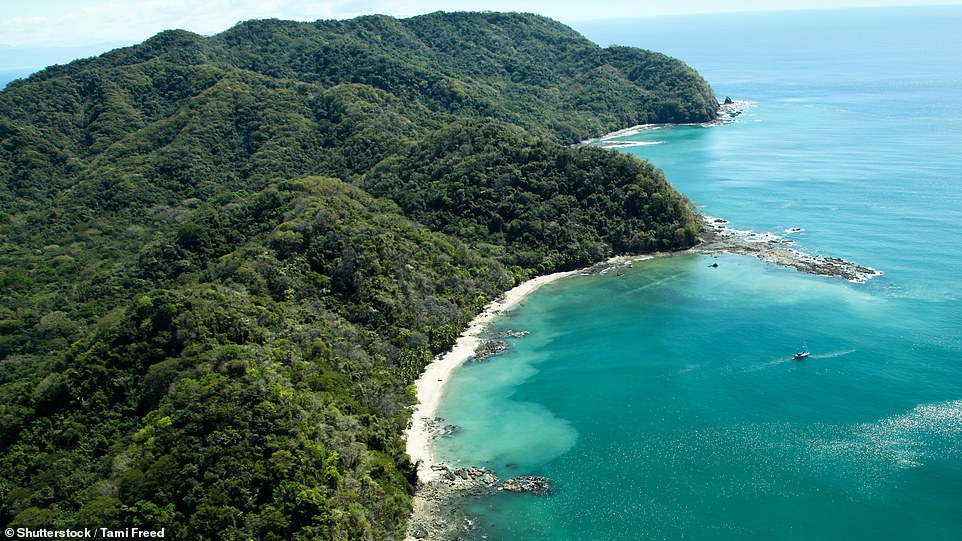 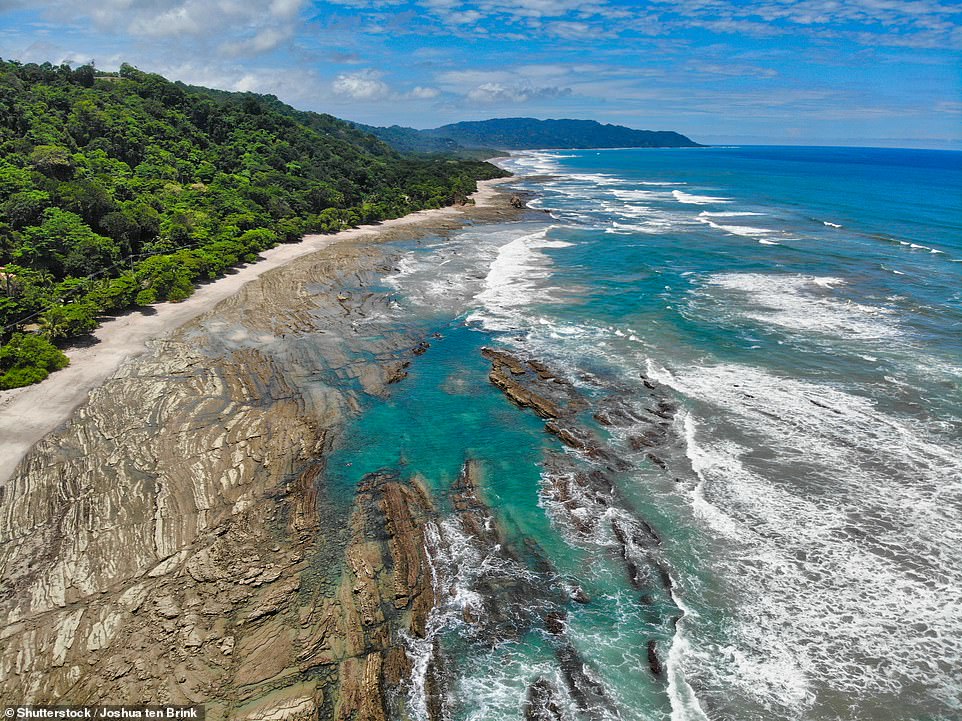 Above is the beach at the small town of Santa Teresa, which has a reputation for reliably powerful surf breaks 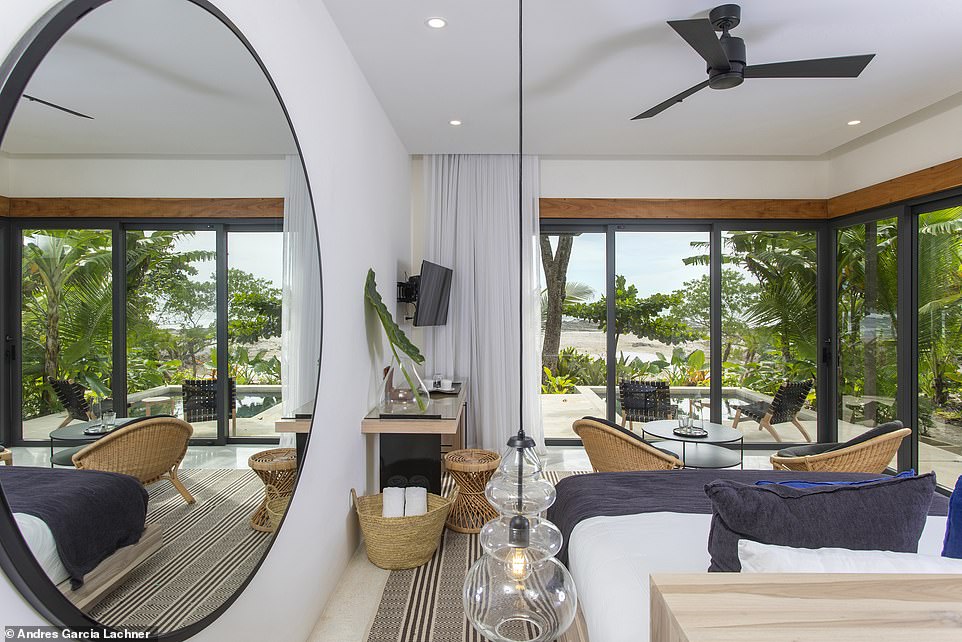 Nantipa (nantipa.com) is leading the way here for eco-friendly boutique accommodation and offers stylish rooms with plunge pools in private jungle gardens. Visiting raccoons and squirrels – plus fireflies that light up the treetops by night – come free.

Hammocks are strung on a wild beachfront, hugged by rainforest full of howler monkeys. Make sure you walk along the rugged coastline, with brown pelicans and red-legged land crabs for company, and skip over freshwater streams that run from the forest to the ocean.

It’s all about simple pleasures in Costa Rica. Savour breakfasts of eggs with plantain; cheer on the great frigatebird as it fishes for its lunch; enjoy yoga on the beach; daydream in a hammock strung between almond trees; sip a Guaro Sour (a sugar-cane-based liquor with lime) at the ramshackle Ranchos Itauna bar as the sky turns from tangerine to violet.

By now ‘pura vida’ will be tripping off your tongue. Never mind if the beach bars aren’t offering half-price drinks, because the hour is happy anyway when you’re living life in a pure way.