The Perthshire hotel that will delight foodies and fishing fanatics

A touch of Brooklyn breeziness in the Scottish Highlands: Inside the Perthshire hotel that will delight foodies, fishing fanatics… and those partial to an NYC vibe

With pints in hands and nets and rods leaning against a wall, I spot a small shoal of anglers outside The Grandtully Hotel when I arrive.

In a tiny village of the same name (it means ‘rough mound’), the hotel is next to the River Tay, Scotland’s longest, where salmon mix with kayakers, while red squirrels scamper in the nearby trees.

The sound of water apart, this is a quiet place – an hourly bus constitutes the majority of traffic going past this Victorian-era hotel.

In 2018, it was transformed from a backpackers’ hostel by the family partnership of Andrew, Chris and Rachel Rowley when they swapped London and Edinburgh for this beautiful part of Perthshire. 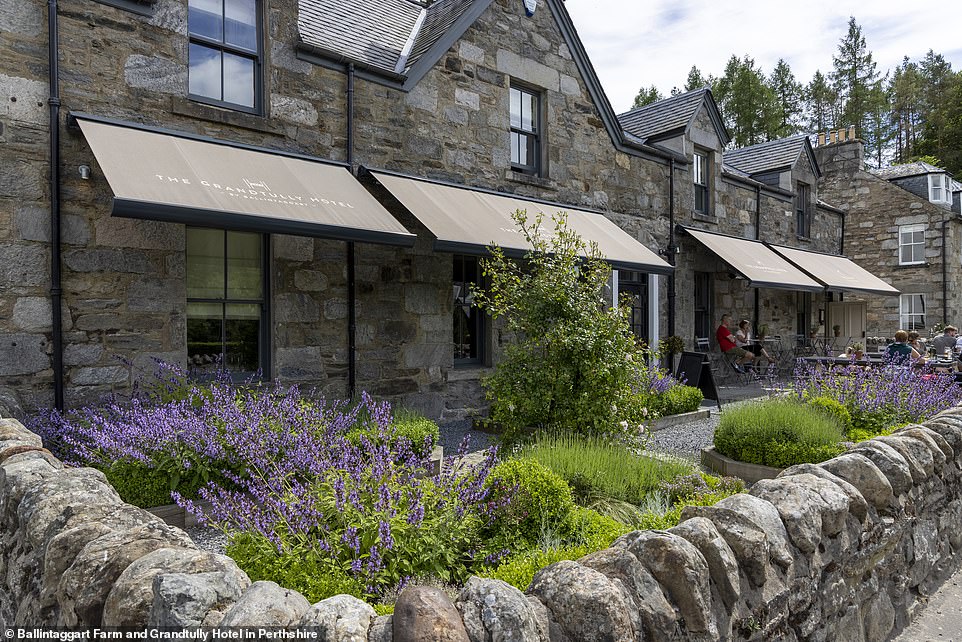 Peaceful: Sarah Turner checks in to The Grandtully Hotel (pictured) in Perthshire, which is next to the River Tay

It is homely in a highly stylised way, including nooks with books. Upstairs, eight bedrooms are kitted out with vintage furniture, cast-iron baths and comfy chairs, along with kettles and fresh milk. There’s a bar, too, which dispenses negronis that Andrew makes and bottles himself, local beers as well as the hotel’s own gin made from ingredients foraged from the surrounding area.

The trio have interconnecting, food-based projects in the area. Ballintaggart Farm is a smallholding that combines a luxury holiday let and event space with a popular cookery school, and there’s a food shop in nearby Aberfeldy. But all of it comes together at Grandtully.

With dark colours and unfussy decor, there’s a touch of Brooklyn breeziness about it and on a Sunday night the hotel is packed. Alongside the anglers are a group here for a wedding and some locals, all digging into the food. 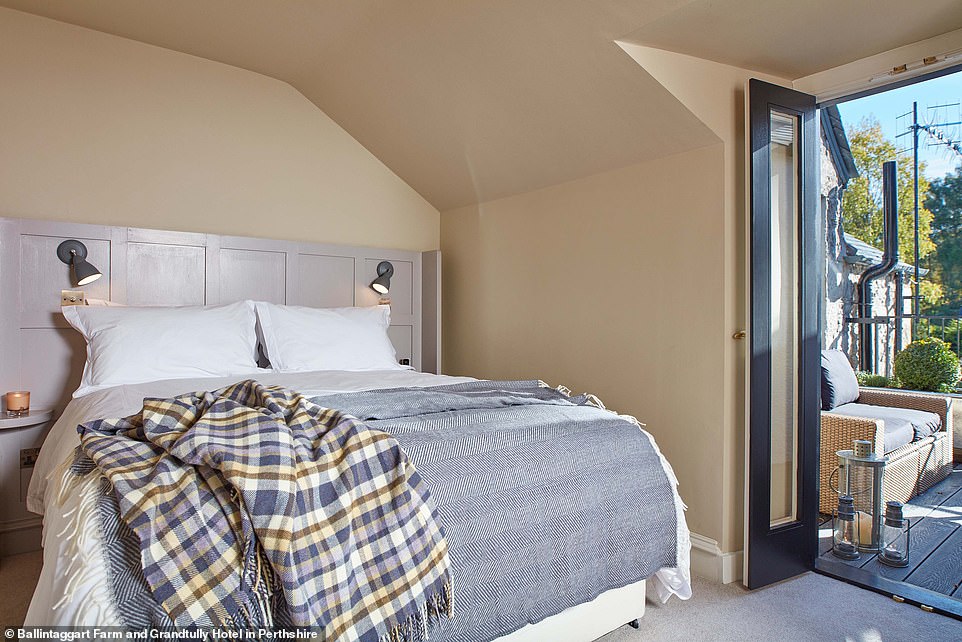 Unfussy: Sarah says the decor has a ‘touch of Brooklyn breeziness about it’ 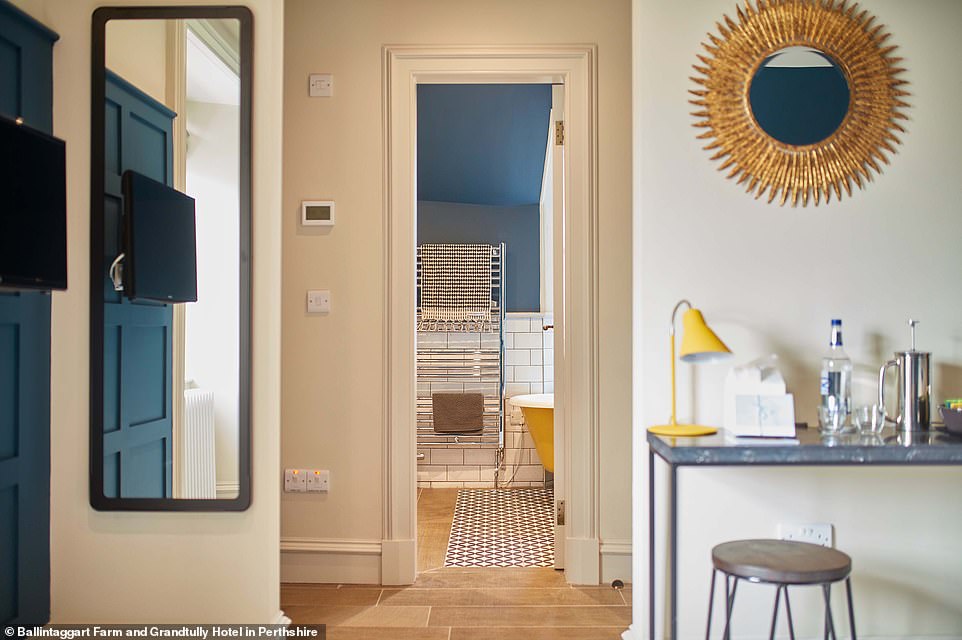 There are eight bedrooms kitted out with vintage furniture, cast-iron baths and ‘comfy’ chairs 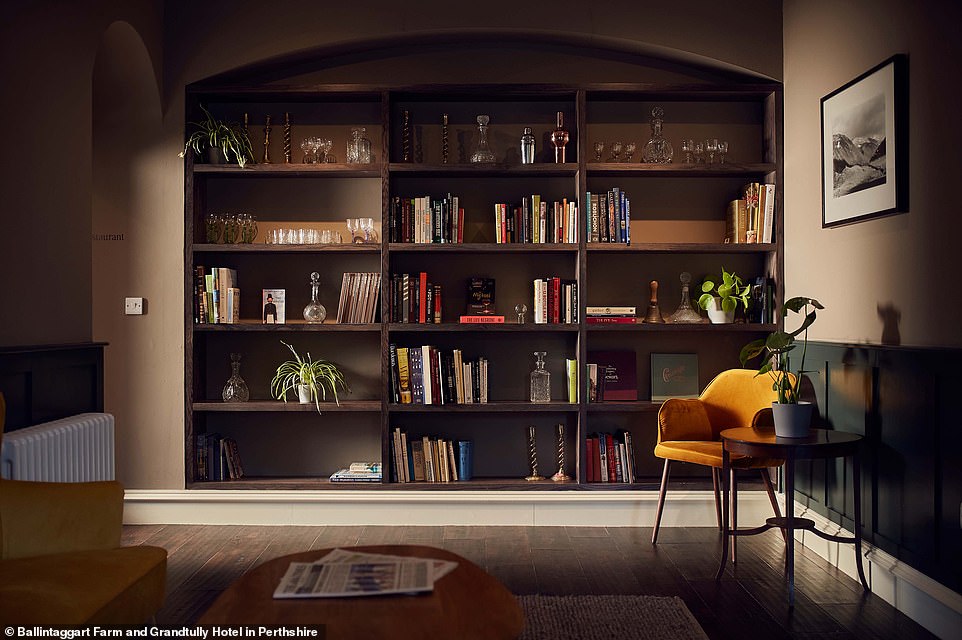 The hotel was transformed from a backpackers’ hostel in 2018 by the family partnership of Andrew, Chris and Rachel Rowley

Andrew is in charge of the kitchen and while there’s a certain amount of fermenting and foraging to be found on the menu, there’s discipline too. Formerly at the luxury Dakota Edinburgh boutique hotel, he aims for a maximum of just three main, seasonal ingredients. The results show in a coley Kiev with wild garlic and parsley emulsion – a delicious riff on the more usual chicken version – along with kale from the garden.

There are tasting menus for meat-eaters, vegetarians and vegans. Here is a destination that you want to work up an appetite for – and that’s not too difficult, with white-water rafting just outside the door on the Tay as well as plenty of cycling and walking routes.

Surrounded by Perthshire’s astonishing farmland, The Grandtully Hotel is able to cherry-pick its produce, from venison that comes from the nearby Murthly Estate and fish from both Scotland’s east and west coasts to soft fruits in summer. 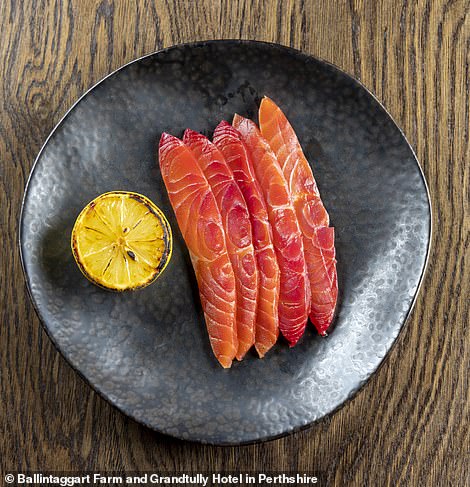 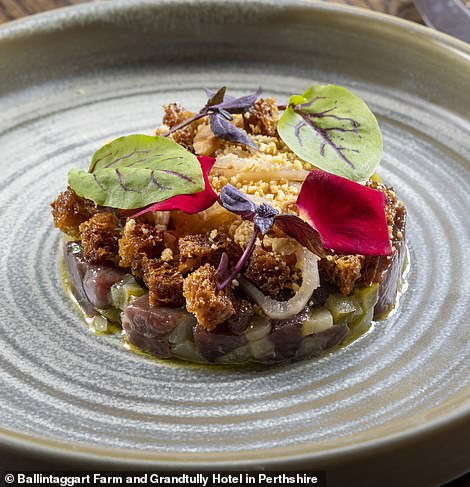 The hotel’s menu is driven by seasonal produce, Sarah reveals. ‘Andrew is in charge of the kitchen,’ she explains, ‘and while there’s a certain amount of fermenting and foraging to be found on the menu, there’s discipline too’ 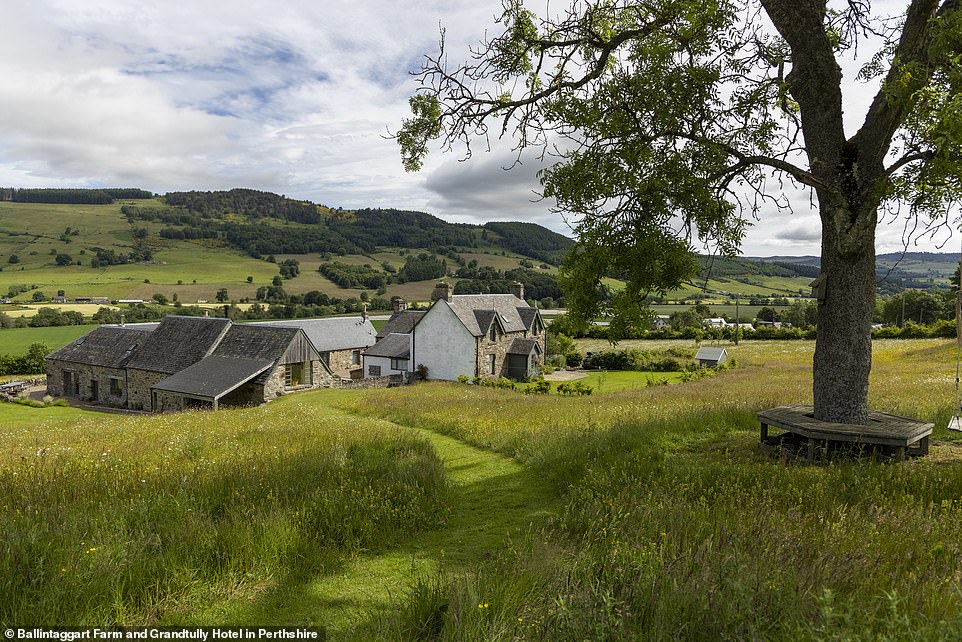 The hotel’s owners have interconnecting, food-based projects in Perthshire. Ballintaggart Farm (pictured) is a smallholding that combines a luxury holiday let and event space with a popular cookery school, and there’s a food shop in nearby Aberfeldy

Nearby Dunkeld is lined with high-end provision stores, while next door to the hotel is the Highland Chocolatier offering hand-made truffles.

The Grandtully also has a shop selling provisions, including its own chewily delicious sourdough bread, jams and chutneys, plus ready meals – a measure introduced in the pandemic that’s continuing by popular demand.

Windows open for the Scottish air, I slept like a baby. In the morning, the groom’s family are trying to soothe wedding nerves with jokes, while we tuck into smoked salmon, yogurt by artisan dairywoman Katy Rodger, venison salami and coffee roasted in Glen Lyon – and I can’t help buying some of it to enjoy this bit of Perthshire when I get home.

The Grandtully Hotel, Perthshire. B&B doubles from £165 a night (ballintaggart.com/grandtully-hotel).