For the first time in too many years to mention, Christmas markets are back in full force. And that means the heady spices of Gluhwein, irresistible pastries, roasting chestnuts, woollen goods and handmade seasonal crafts.

Many people are pulling the purse strings tight this winter, but that doesn’t mean we need to forgo festive cheer. So here’s our round-up of the best Christmas markets in Europe which won’t break the bank. 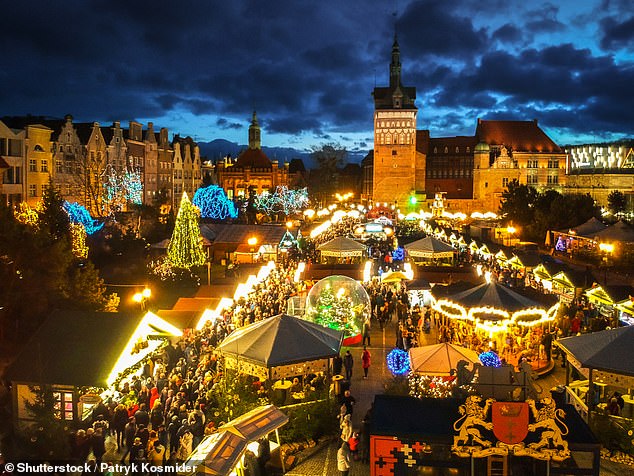 Glowing with festive joy: Gdansk Christmas Market, above, is full of hand-crafted gifts. Return flights from London with Ryanair start from £26

Sitting on the Baltic coast, Gdansk is home to a centre full of colourful facades and a 17th-century fountain topped with a bronze statue of Neptune. This Christmas Market is one of the country’s most visually appealing and is full of hand-crafted gifts.

HOW TO DO IT: Ryanair (ryanair.com) London to Gdansk from £26 return. Doubles at Hotel Gdansk Boutique (hotelgdansk.com) from £55 per night. Market runs November 18 to December 23.

Strasbourg and Metz tend to take the top spots for French Christmas markets, but this smaller one in Lille still houses 90 chalets selling gifts, decorations and crafts. Crowns of garlands cover the town. While in the market there are pony rides for children and Friday night concerts.

HOW TO DO IT: Eurostar (eurostar.com) returns from £94. Doubles at Ibis Lille Centre (ibis.com) from £59. Market runs November 24 to December 30. 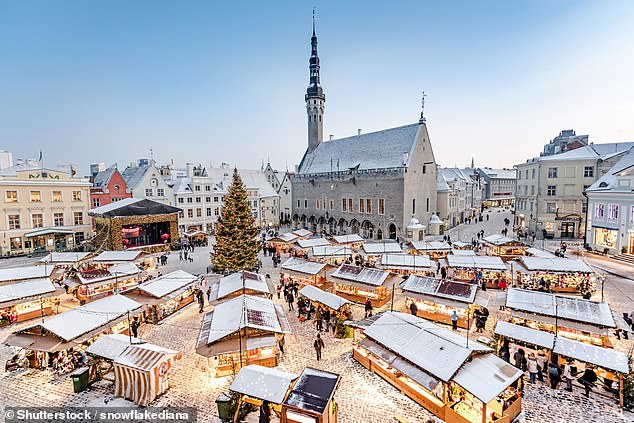 Above is Tallinn’s Christmas Market in the Town Hall Square. Return flights from London with Wizz Air start from £92

You can see Helsinki from Estonia’s capital Tallinn as it overlooks the Baltic. The Christmas Market takes place in the Town Hall Square. But there’s plenty else to do including seeing the Kiek in de Kok, a defensive tower, or 13th-century St Nicholas Church’s exhibition of ecclesiastical art.

HOW TO DO IT: Wizz Air London to Tallinn from £92 return. Doubles at von Stackelberg Hotel (vonstackelberghotel.com) from £69. Market runs November 25 to January 8.

The largest market in Hungary, Budapest’s can be found in Vorosmarty Square. There are more than 100 stalls selling classic Hungarian dishes such as goulash and sausage as well as homemade crafts. The city erupts with Christmas joy and other markets can be found under St Stephen’s Basilica and in Fo Square.

HOW TO DO IT: Wizz Air (wizzair.com) London to Budapest from £52 return. Doubles at Medosz Hotel Budapest from £42 (medoshotel.hu). Market runs November 18 to January 1.

The Slovakian capital Bratislava is often overlooked, despite its charming 18th-century old town, an imposing castle and lively bars and cafes. And it is little over an hour from Vienna by train, for those who want to take in the Austrian capital, too.

HOW TO DO IT: Ryanair London to Bratislava from £67 return. Doubles at Radisson Blu Carlton (radisson.com) from £86. Market runs November 22 to December 22. 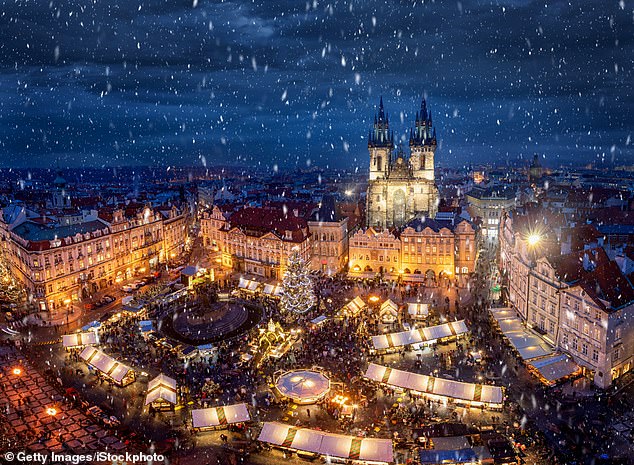 Nicknamed ‘the City of a Hundred Spires’, Prague is known for the Old Town with its colourful buildings, gothic churches and medieval Astronomical Clock. The Christmas Market is made up of brightly decorated wooden huts selling plenty of seasonal gifts.

HOW TO DO IT: Wizz Air London to Prague from £74. Doubles at Hotel Grandium Prague (hotel-­grandium.cz) from £62 per night. Market runs from November 26 to January 6.

Copenhagen is likely not on lists of reasonably priced European city-break destinations. However, this year it has been ranked the seventh cheapest Christmas Market destination by Flightsfinder.com, with the average flights and two nights in a hotel costing £280 per couple. So perhaps now is the time to take a trip to the Danish capital and take in the markets at Tivoli Gardens, Bakken and the city’s zoo.

HOW TO DO IT: Ryanair London to Copenhagen from £43 return. Doubles at Hotel Mayfair (hotelmayfair.dk) from £75. Market runs November 4 to December 21. 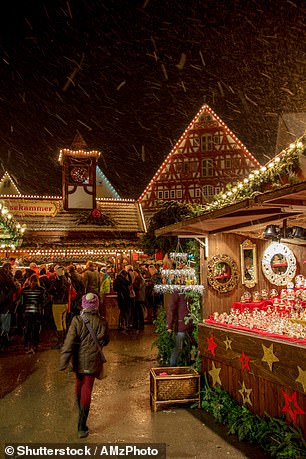 Esslingen in south-west Germany puts on a medieval Christmas market, which means as well as 180 stalls, there are stilt-walkers, jugglers and fire-eaters. All this amid romantic alleyways.

The capital of Andalusia might not strike up images of snow-topped houses, but that doesn’t mean the city doesn’t have a good winter market. The Mercado Navideno de Artesania takes place in front of the Town Hall with stalls selling products, food and drink all in the Andalusian style.

HOW TO DO IT: Vueling (vueling.com) London to Seville from £48 return. Doubles at Hilton Garden Inn (hilton.com) from £76 return.

Surrounded by snow-capped peaks, Merano is an atmospheric winter destination in South Tyrol. It’s famous for being the home of writer Franz Kafka but the Christmas Market is nothing to be sniffed at either. There are daily concerts, children’s entertainment and this intriguing Italian commune embraces Austrian Krampus — when actors dressed up in spooky masks loiter around the market supposedly scaring children who have misbehaved.

HOW TO DO IT: Ryanair London to Merano from £20 return. Doubles at Hottel Aurora (hotel-aurora-meran.com) from £89. Market runs November 25 to January 6.