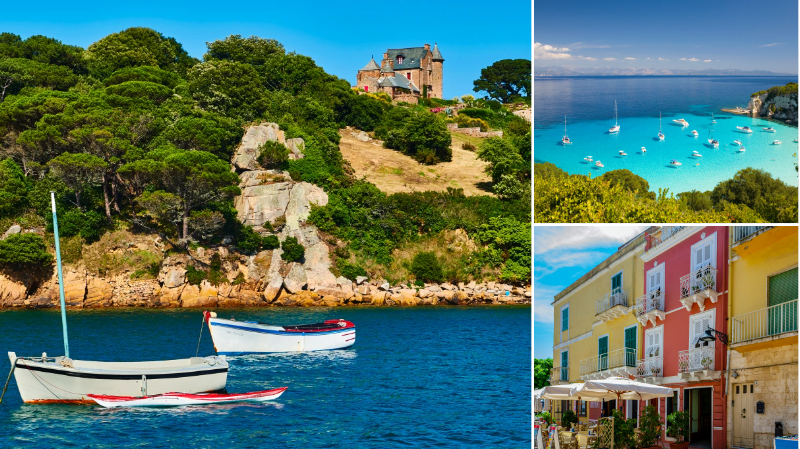 Is there anything more romantic than the idea of taking a little boat to a peaceful, undiscovered island?

You’ll be hard-pressed to find anywhere truly undiscovered in Europe, but if you take the boat less travelled, you may find some hidden gems.

From shimmering turquoise lagoons in the Med to tranquil sand dunes in the North Sea, we’ve hunted down the island destinations you must add to your travel bucket list.

Plus we’ve already worked out how you can get to them. Bon voyage!

Legend says the Greek god Zeus broke off a chunk of Corfu in a fit of rage and tossed it 14km away into the Ionian, creating the tiny island of Paxos.

Despite its angry beginnings, this island is the picture of tranquility, making it a laidback alternative to tourist hotspots like Mykonos and Santorini.

With just three small villages to stay in it might seem a little too sleepy, but there are plenty of tavernas and restaurants, some of which host traditional Greek dancing.

Away from the breathtaking cliffs, coves, and pebble beaches along the coast, you’ll find endless olive groves and vineyards.

Get there: Take a ferry boat or hydrofoil from Igoumenitsa, on the mainland, or from Corfu.

Stay: San Giorgio has small studios just a 6-minute walk from the beach in Gaios, from £52pn.

Boasting an old town to rival Dubrovnik’s and stunning views of the Dalmatian coast, the (rumoured) home of Marco Polo should make it onto any Croatian travel list.

Spend a few days wandering around the old town admiring the perfectly preserved medieval architecture, sample yummy (and inexpensive!) Croatian cuisine, and while away the evenings in one of the buzzy bars.

Want to mix relaxation with adventure? Explore magical Kočje Nature Park with it’s lush moss-covered rock formations, go back to the Stone Age with a visit to the prehistoric cave at Vela Spila, or book a buggy tour around the island.

Stay: Chic boutique hotel Tara’s Lodge has its own private beach, from £95pn.

From the enchanting coves of its rugged coastline to the colourful town of Carloforte, San Pietro is exactly what you dream of when you think of a Mediterranean holiday.

Under the the vast pink volcanic cliffs you’ll find glistening pebble beaches ideal for swimming, diving and snorkeling, and the vibrant side streets of the main town are filled with bars and restaurants.

The culture and cuisine is closer to Liguria on the mainland than nearby Sardinia and delicacies include local tuna and farinata, a crispy pancake made from chickpea flour that’s also popular in Genoa.

The island is also ideal for nature lovers, as hundreds of birds of prey nest along the steep cliffs, including the rare Eleonora’s falcon.

Get there: Take the local blue-and white ferry from Portovesme to Carloforte (40mins).

Stay: Lu’ Hotel Riviera is a trendy spot with a fantastic view of the port from its rooftop bar, from £60pn.

Just off the French mainland lies a picturesque little island that was once hub for poets and artists from Gauguin to Matisse.

Today it’s a lot quieter, but  Île-de-Bréhat is still a charming holiday destination.

The so-called ‘island of flowers’ has it’s own micro-climate, meaning it’s pleasantly mild for the Brittany coast, as well as having stunning mix of northerly heather and gorse bushes and more exotic agapanthus flowers and mimosa trees.

There are no cars here, but the whole island can be reached by bike or by foot in a matter of hours, making it easy to spend a whole day exploring its many bays and beaches.

Get there: The small passenger ferry from Paimpol to the island takes just 10 minutes.

Stay: Men Joliguet is a small B&B with beautiful gardens from £83pn.

When you think of white sandy beaches, the first place that springs to mind isn’t usually Germany. But dotted along the northern coast you will find a string of small, sand dune covered islands, of which peaceful Juist is one.

Juist’s local nickname translates to ‘wonderland’, and this quirky island is like no other. They take sustainability seriously here (they aim to be climate-neutral by 2030) and there are no cars on the island, just horse-drawn carriages and bicycles.

While the day away in a ‘Strandkorb’, a wicker beach chair that protects from the wind and sun, listening to the sounds of the waves and distant horses hooves. Pure relaxation….

Get there: Take the boat (1.5hrs) from Norddeich-Mole train station (reachable from most major German cities).