Want to avoid the partygoing hordes on Cyprus? Then head east to peaceful Protaras, home to wonderful beaches and translucent waters

The darlings of Cypriot package holidays never fail to attract the hordes — think Paphos, Larnaca, Limassol and Ayia Napa. But head east to Protaras and it’s an entirely different story.

Truly secret it is not — Fig Tree Bay, a golden beach with translucent waters sheltered by a rocky islet from seaborne gusts, features regularly in ‘best beaches’ lists. Yet there is quiet to be had, especially if you’re thinking of taking a trip outside the peak season.

From my balcony at the King Jason Hotel, the best located on Protaras, there are sweeping views of both the eye-soothing expanse of the Mediterranean in the east and the necklace of beaches stretching to the north. 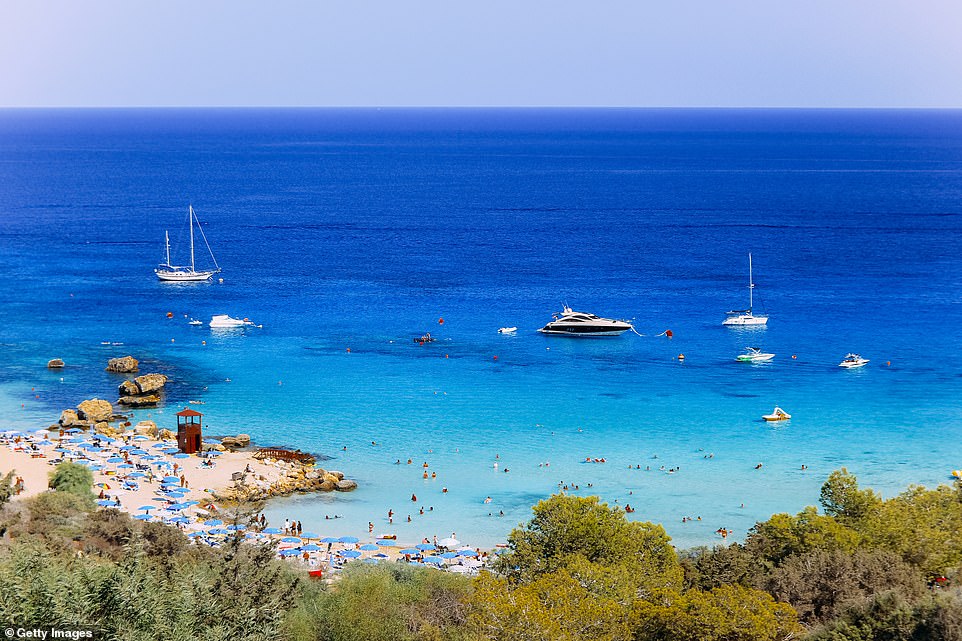 Come on in: John Malathronas heads to Protaras on the eastern side of Cyrpus and finds that its ‘low-profile charm creeps up on you’. Pictured is Konnos Bay to the south of the tranquil town

After the British, who come in some numbers, the other major contingent was, until recently, the Russians. But they’re out of this picture for now, and there’s no sign of them returning soon.

Protaras’s low-profile charm creeps up on you. None of the hotels would win architectural prizes, but there’s a boardwalk that runs parallel to the shore for about four miles, which keeps the marine vistas unhindered.

The beaches are wonderful. My initial favourite turns out to be man-made: Kalamies, a curvaceous swirl of demerara-coloured sand at the northern tip of Protaras, named after the seafood taverna that overlooks it. Sitting here with fresh-fried calamari, Greek salad and homemade taramosalata is a special treat.

Mr Andreas Zachariades, who founded the restaurant in 1976, comes over for a chat.

‘We took sand from other places and tipped it on to the beach,’ he says. ‘We also built those breakers, rock by rock, over decades, because the sea takes in the sand and deposits it elsewhere.

‘Originally, this was all watermelon fields that belonged to my wife.’ 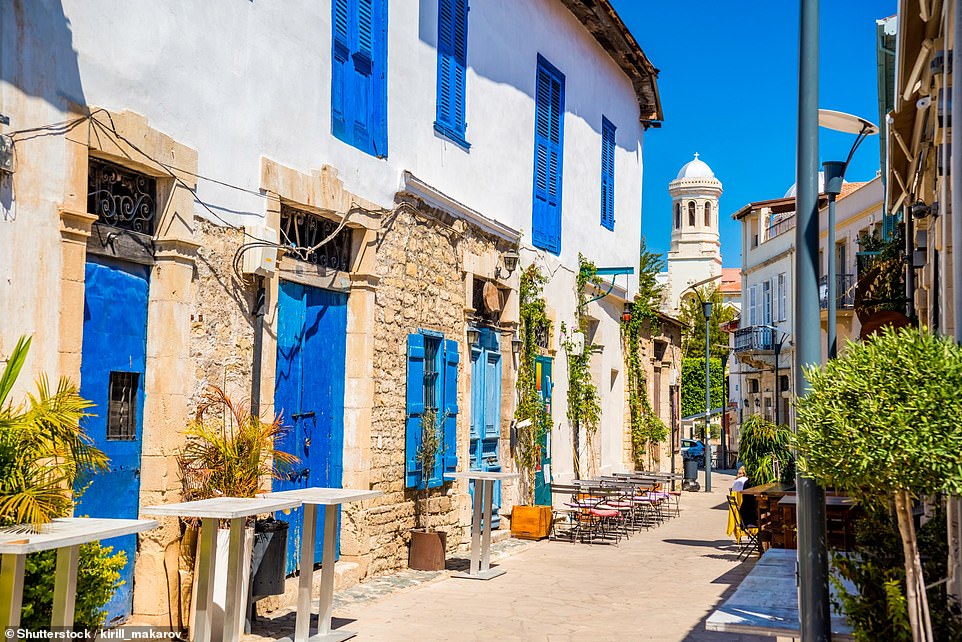 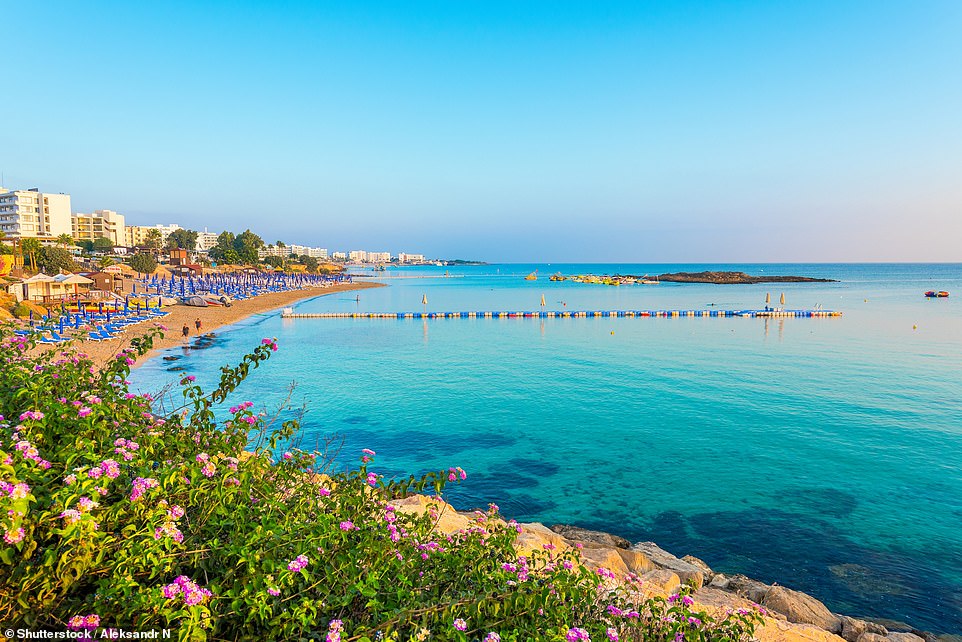 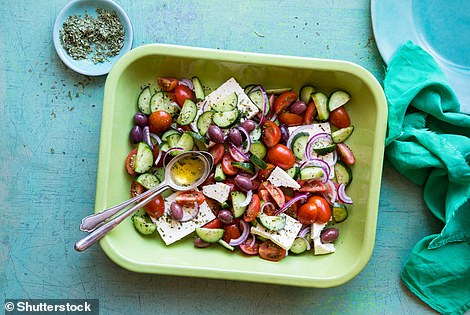 In Greece, it used to be customary for sons to inherit the good farming areas up-country, while the poor-soil coastal land would be bequeathed to daughters. But when tourism exploded, those seaside plots became valuable land on which to build hotels.

One morning, Konstantinos, a barman at the hotel who is keen to show off lesser-trodden beaches, drives me to Agia Triada, a Blue Flag classic; cutesy Sirena, a gilded arc flanked by cliffs; rocky Malama; and azure Konnos Bay, on the road to the Cape Greco National Park.

But he leaves the best until last. About five miles north of Protaras is Dog Beach, a sandy stretch for canines and their owners. 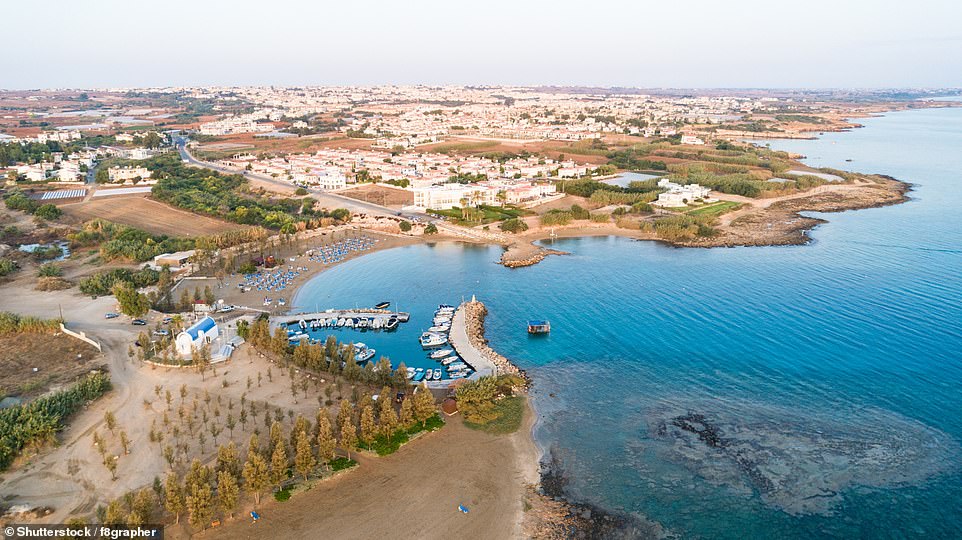 One morning, a barman at John’s hotel who is keen to show off ‘lesser-trodden beaches’, drives him to Agia Triada (pictured), ‘a Blue Flag classic’ beach

The nearest airport to Protaras is Larnaca, served by BA, easyJet, TUI, Jet2 and Wizz Air. Flights from Luton in April with Wizz Air cost from £87 return (wizzair.com). You can reach Protaras from Larnaca by taxi (50 minutes, €55). TUI offers seven days at the King Jason Hotel in April from £813 pp all-inclusive (tui.co.uk).

‘Now, let me show you the other side,’ says Konstantinos.

And there it is, past the headland: a lovely curl of sand with no deckchairs, no facilities, no shade and no people or pets.

There are said to be 45 beaches on the east coast — and this one seems as though it’s there just for you.

Fellow hotel guests Mark and Sarah, a retired couple from Berkshire, are Protaras regulars. They say they enjoy swimming at Fig Tree Bay as well as walks along the coast for the ‘solitude’.

Of the latter, the palm tree-lined trail south is one of the best, soon coming to a slew of tiny coves.

Out on the water in one, an anchored party boat from Ayia Napa bobs, yet somehow the music seems wrapped around it, respectful of the surrounding stillness.

Let other resorts draw the crowds; long may Protaras keep its subtle secrets.