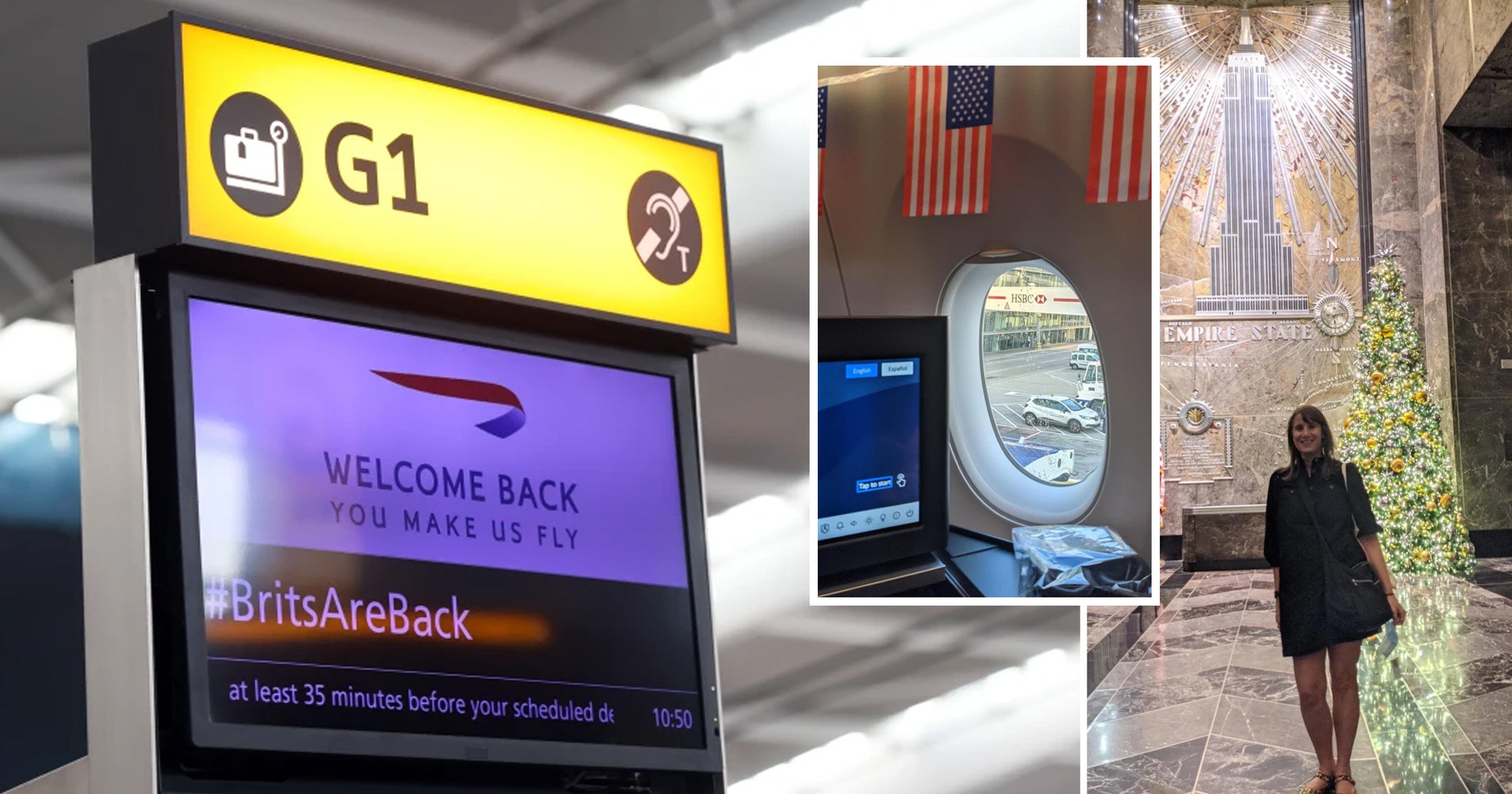 ‘Ma’am; MA’AM; you’re standing much too close to the counter. Please back away.’

Well, it’s been over a year and a half, but it’s good to see some things haven’t changed.

Getting through security at a US airport is as humourless as ever, fraught with the same sense that you’ve done something wrong and could get taken aside for a ‘gentle’ interrogation at any moment.

And what with all the forms I’ve had to fill in, and tests I’ve had to take to get here, I could well have made some kind of unwitting error resulting in my detention.

But thankfully – stoic, unsmiling security staff aside – this, my first trip to America since February 2019, has been nothing short of a joy (despite the godawful early start).

In advance of the borders finally reopening, at Heathrow Terminal 5 the atmosphere was buzzy, ground staff beaming as they served a platoon of lucky journalists – including me – a variety of US-themed canapes and even a couple of cocktails, all at six in the morning.

But when you’re offered an aptly-named Manhattan, expertly mixed by London drinks guru Mr Lyan, you’re hardly going to turn it down.

BA flight 001 – so-named in memory of Concorde’s old code number – is full; booked out within 24 hours of going on sale, one of the crew tells me. It took off at exactly the same time as Virgin Atlantic flight VS003, in a UK first.

Deprived of a view of this historic moment (I was sitting on the wrong side of the plane), I collar Captain James Basnett later to ask him how it felt.

‘It’s not like we could do a trial run,’ he explains.

‘We had to time it and co-ordinate it to the exact same second. I couldn’t believe it when I looked out of the window and saw them at exactly the same height as us, just like a mirror image. It was exhilarating – something I’ve never done before. I’m not exactly sure whose idea this collaboration was, but it was a great thing to do.’

British Airways’ CEO, Sean Doyle, is also on-board, and makes an impassioned speech about how important the routes between the UK and the USA are, and how badly hit the aviation industry has been by the pandemic.

He also reiterates the company’s commitment to sustainability, and informs all passengers that the carbon footprint of our plane – an A350-1000, for any plane-spotters reading this – will be 40% lower than the previous plane which used to do this route, and that they have fully carbon-offset the flight.

In addition, they are using sustainable aviation fuel (SAF) which is 35% more efficient, with a target of powering at least 10% of their flights by SAF by 2030, and an ultimate goal to get to carbon net zero by 2050.

Finally kissing the tarmac at JFK at precisely 11am US time – the first day since March 16, 2020, that Brits without close links to the USA have been able to do so – is thrilling.

And as we come through security, we’re greeted by a barrage of press, eager to ask us why we’re here, what we’re looking forward to most (a shower, I answer honestly to a lovely journalist from USA Today), and whether we’ve missed the USA. ‘So much’, I tell a man from an unspecified news channel, getting a bit emotional (though that could be due to the lack of sleep coupled with the three glasses of champagne I had on the flight).

Being driven through Manhattan on my way to check in at the rather bouji Conrad Hotel Midtown, I have the same feeling of awe on gawping at all the skyscrapers as I did on my very first visit to this glorious city, as a young whippersnapper aged 22. New York is seducing me all over again.

Later that afternoon, I’m invited to a special ceremony at the Empire State Building. When I arrive, there’s a speech by the new Consul-General to New York, Emma Wade-Smith, who is delighted that relations between our two countries can finally get back to normal.

She’s joined by a special guest, which just so happens to be Hollywood film star and original Gossip Girl alumnus Blake Lively, who’s repping her own brand of cocktail mixers alongside her husband Ryan Reynolds’ (sadly absent) Aviation Gin.

Between them, Emma, Blake and Sean Doyle switch on the new illuminations which will light up the 102 storey-building, which underwent a multi-million dollar renovation during the pandemic.

Red, white and blue are the colours of the day, and it’s hard not to feel a burst of patriotic pride, especially as Blake herself professes to be ‘so glad to see you Brits back!’

Later, out on the 86th floor terrace, where once King Kong wreaked havoc, Tom Hanks seduced Meg Ryan, and Will Ferrell tried to convince his father he wasn’t an elf, I gaze out across the illuminated city and feel a deep pang of joy.

New York, and America as a whole, like so many others, I’ve really missed you. Now, please, however rude your airport security staff are, don’t ever, ever change.