What it's like to have an action-packed adventure in Madeira 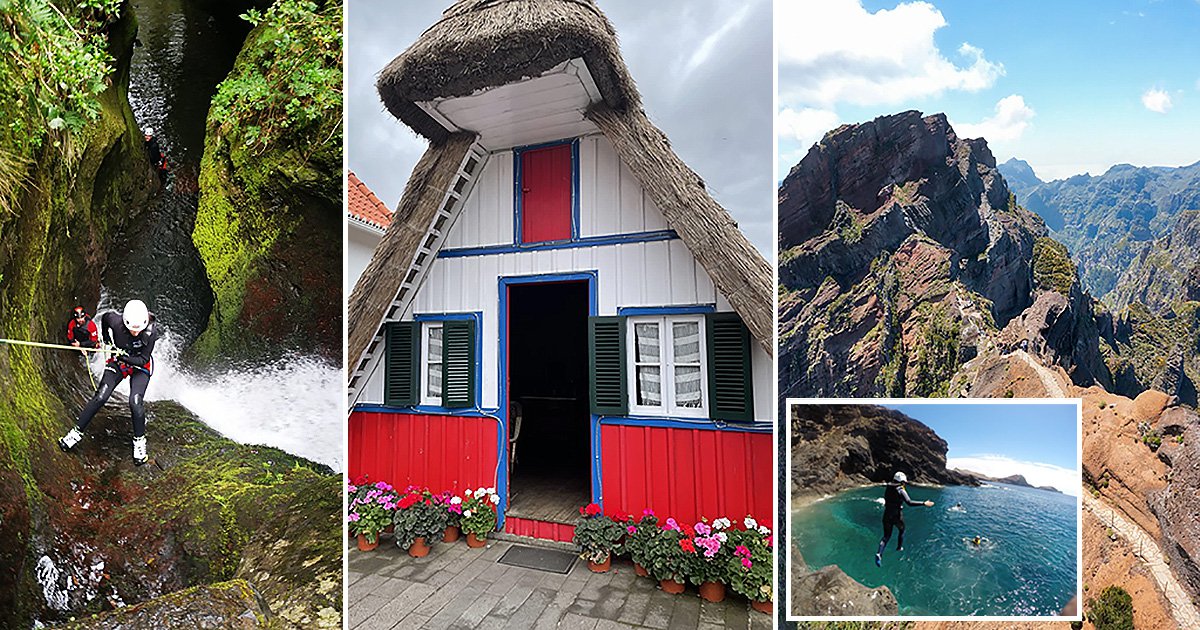 Clinging on to a barnacle-covered cliff face as the Atlantic Ocean crashes beneath me, I have just a few seconds to scold myself for ever thinking that a holiday in Madeira was going to be dull.

How could I have imagined that this sunny Portuguese island, blessed with a subtropical climate, volcanic-sand beaches and a breathtaking terrain of mountains and ravines, would be – dare I say it? – sleepy?

‘Jump!’ shouts my instructor and I’m snapped back into the present, leaping into the sea and gasping with the shock of the chill as my fellow adventurers whoop their support.

Trust me, there’s nothing staid, ordinary or dull about this beautiful isle, which quite rightly has been named World’s Leading Island Destination for the past seven years on the trot by the World Travel Awards, beating the likes of Bali, Barbados and the Seychelles in the process.

In addition to the beauty, the beaches, the warm welcome from locals and the mouth-watering delicacies, Madeira is making a name for itself as the home of daredevil activities such as canyoning, coasteering, trail-running and mountain biking, as well as hiking.

My boyfriend and I, thrill-seeking twentysomethings, find our base for the week – the Castanheiro Boutique Hotel – tucked down a street off the town square in the island’s capital, Funchal.

The four-star hotel is a maze of courtyards made up of buildings dating back to the 18th century, with a restaurant, cocktail lounge and spa.

The star attraction is on the fifth floor: a rooftop infinity pool and bar with panoramic views.

We’re not here to spend all day sipping piña coladas up there, though, and our guide, João from Mountain Expeditions, arrives to take us on a Jeep tour of the eastern side of the island (from €35pp for a half-day tour with Mountain Expedition).

Our first stop is Pico do Arieiro, which despite being Madeira’s third highest peak at 5,965ft is easily accessible by car.

Although we left Funchal in sunshine, we drive into dense cloud but the chill is forgotten as the mist gives way to breathtaking views over rocky peaks and lush valleys. ‘Welcome to our civilised Jurassic Park,’ says João.

Despite the island’s tiny size, in a day’s travel you can see landscapes seemingly from every corner of the world.

There are pine forests that would be at home in the Canadian Rockies, Mediterranean-style bays and Amazonian waterfalls, while the dramatic eastern point of the island, Ponta de São Lourenco, wouldn’t look out of place on the Cornish coast.

Standing on that rocky outcrop, we look back across the island and see the reason for Madeira’s ever-changeable weather – clouds gather ominously over the northern side of the island but are held back by the mountains, leaving the south gleaming in sunlight.

After a drive through Santana to see the traditional A-framed houses, we stop at Quinta do Furão Hotel and Restaurant (rooms from £74.50pn) for a lunch of espetada – beef served on a skewer.

Sales manager Décio Silva tells us that while the hotel was once almost exclusively populated by elderly Germans, it’s now embracing the younger crowd that is moving in to enjoy the island’s more adventurous activities.

‘You can have crazy adventures or you can lie by the pool with a cocktail,’ he explains. ‘In Madeira there is the option to do both.’

Covid put a dampener on Madeira’s tourism industry but it helped welcome two new kinds of guests: digital nomads and the Instagram generation (the hotel’s outdoor pool became an online hit in 2020 thanks to its backdrop of the coast).

Back in Funchal, there’s much more to take pictures of, including cobbled streets lined with boutiques, a palm-lined promenade and exotic flowers.

There might not be much of a party scene but Funchal has its share of bars, including Dash, for cocktails, and Venda Velha in the old town, where we sip on poncha, Madeira’s rum-based drink (passion fruit is the best).

Foodies flock here for the seafood – upmarket Akua serves exquisite fish dishes while Peixaria do Mercado’s scabbard tempura was fresh from the market hall next door.

We then prepare for our foray into extreme sports: canyoning. We’ve signed up for beginner level but Francisco, boss of adventure sports company Epic Madeira, has other plans.

After squeezing into wetsuits laden with carabiner clips, we trudge to Ribeiro Frio to begin a challenging course of abseiling, climbing and paddling down a narrow, waterfall-filled canyon.

When Francisco Pereira founded Epic Madeira 16 years ago, canyoning was quite new, brought to the island in the early Noughties. But he’s still finding reasons to fall in love with it.

‘I call it the face of nature,’ he says, pointing to a mossy face nestled into the wall above a rock pool.

I embrace the mix of tranquillity and the thrill of throwing myself off things. Thanks to the guides I make it to the end, shivering from elation and the cold water pooling in my shoes.

We’re back next morning for our next activity with Epic Madeira – coasteering.

The idea is to use the natural handholds of the gnarled volcanic rocks to scramble up the cliff, leaping into the ocean below and far out of my comfort zone.

After two hours we reach ‘the exit’ – a steep climb straight up the cliff. My reward? A sense of accomplishment I’ve never experienced on a holiday before.

Looking from the cliff’s edge out to the ocean I’ve just crawled out of, I make two promises.

I’ll never underestimate Madeira again – and I’ll be back for more adventure soon.

Coasteering from €70pp, canyoning from €60pp with Epic Madeira. Castanheiro Boutique Hotel has rooms from £101pn. Jet2.com flies to Madeira from London Stansted from £99 return. Jet2holidays offers seven-night holidays to Madeira from £459pp.