These amazing images show just how beautiful the man-made world can be.

They are the stunning winning and shortlisted shots in the Art of Building photography contest, now in its 11th year, which is run by the British Chartered Institute of Building (CIOB) to celebrate creativity in the construction industry.  The competition’s judges sifted through 3,500 entries from photographers in more than 100 countries that were submitted in 2020 to draw up a 15-strong shortlist. Then an overall winner was picked.

Scooping the judges’ top prize and £1,500 is James Retief, a London-based architectural photographer, who snapped an incredible shot of Big Ben, entitled ‘The Value of Time’, during the tower’s restoration – its largest and most complex to date. The public was also allowed to vote for a winner. Taking home the public choice award, and £1,500, is Borna Mirahmadian from Australia. His amazing photo shows light streaming through a stained-glass window at the 17th-century Karim Khan Citadel in Shiraz, Iran.

Other jaw-dropping images to make the shortlist include a mesmerising shot of a snow-covered theatre in China, a dramatic picture of Europe’s tallest building – the Lakhta Center in St Petersburg – and a beautiful snap of floating houses on a lake in Myanmar.

Caroline Gumble, chief executive of the CIOB and a judge in the competition, said: ‘We all experience an emotional response to a building, whether that is your own home, the place you work or the buildings that describe a moment in time or even an entire society. Our winners this year have successfully explored the beauty that exists in heritage buildings and their continued meaning to us all. We thank everyone who entered the competition and everyone who voted. Congratulations to our winners, you have inspired us.’ Scroll down to see the two winning images and the other 13 that have been shortlisted… 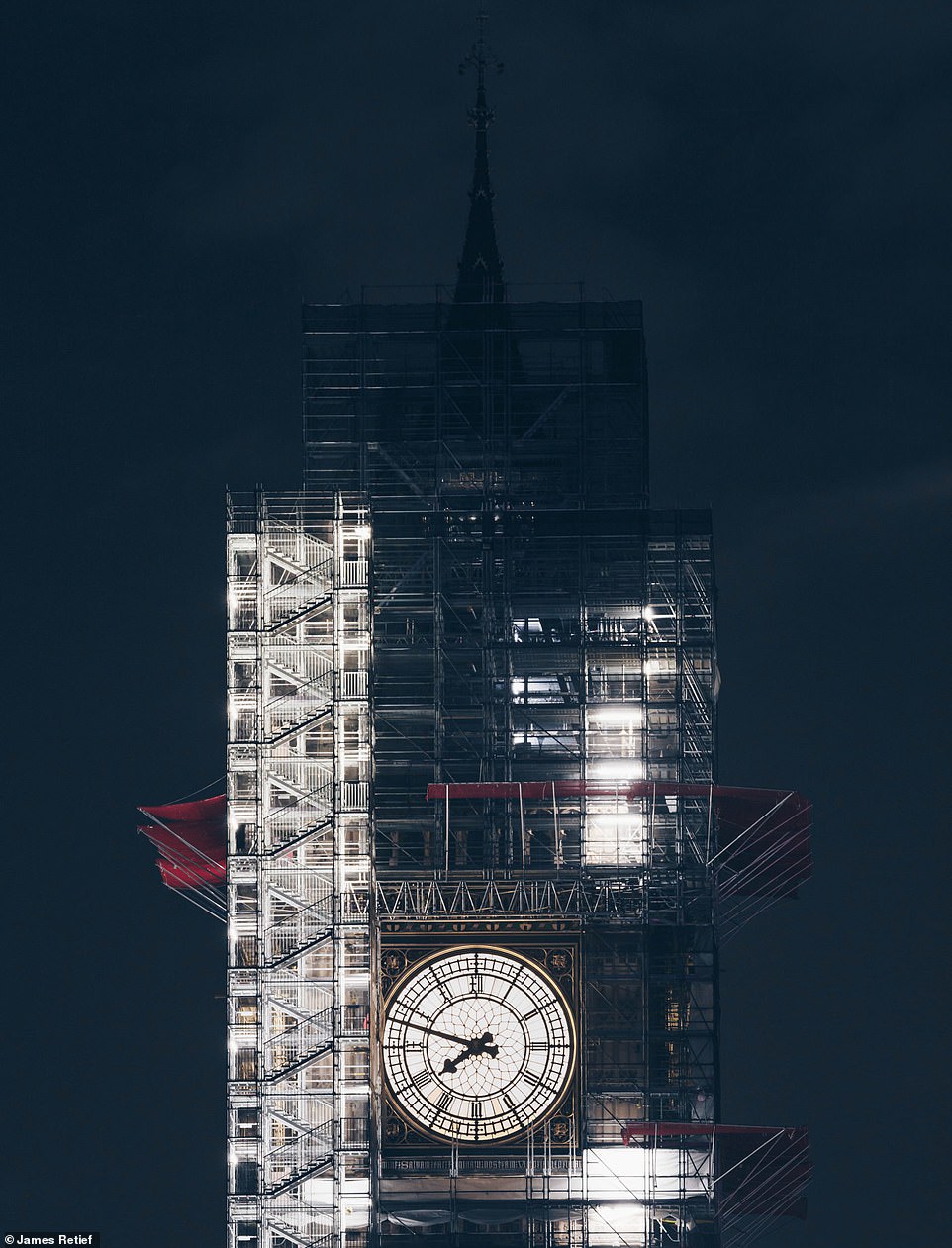 The winner of the judges’ choice award in the Art of Building photography competition is James Retief with this incredible image of London’s Elizabeth Tower, known throughout the world as Big Ben (which is technically the bell in the clock tower). The London-based architectural photographer said: ‘With the ongoing renovations to the Houses of Parliament and Big Ben, this iconic monument has been shrouded in a layer of scaffolding. I found beauty in the filigree matrix of scaffolding poles, stairs and netting that temporarily obscures the monument, abstracting it into a low-fidelity approximation of the overly familiar form’ 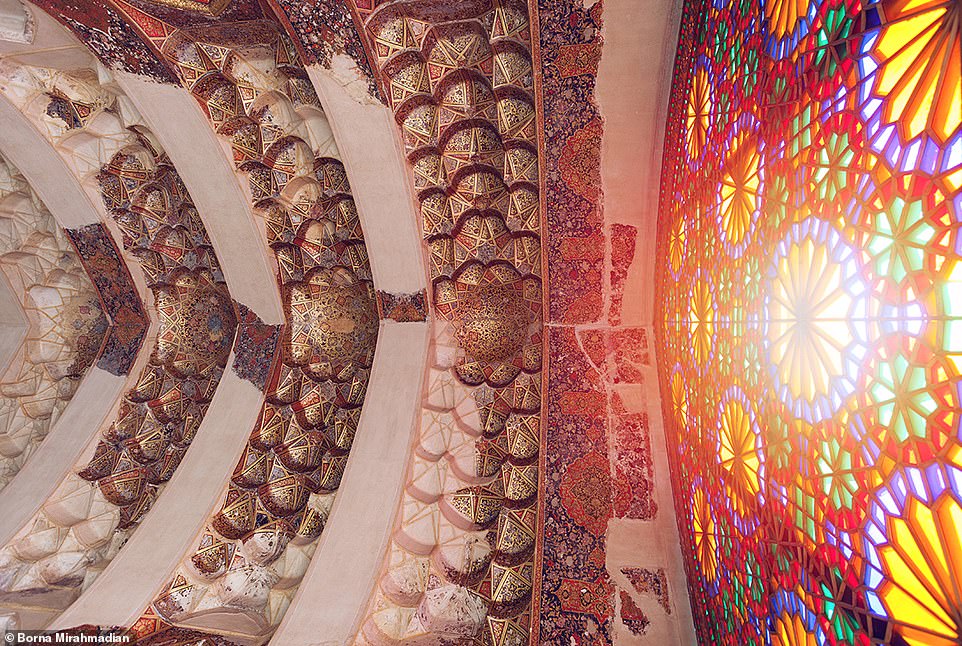 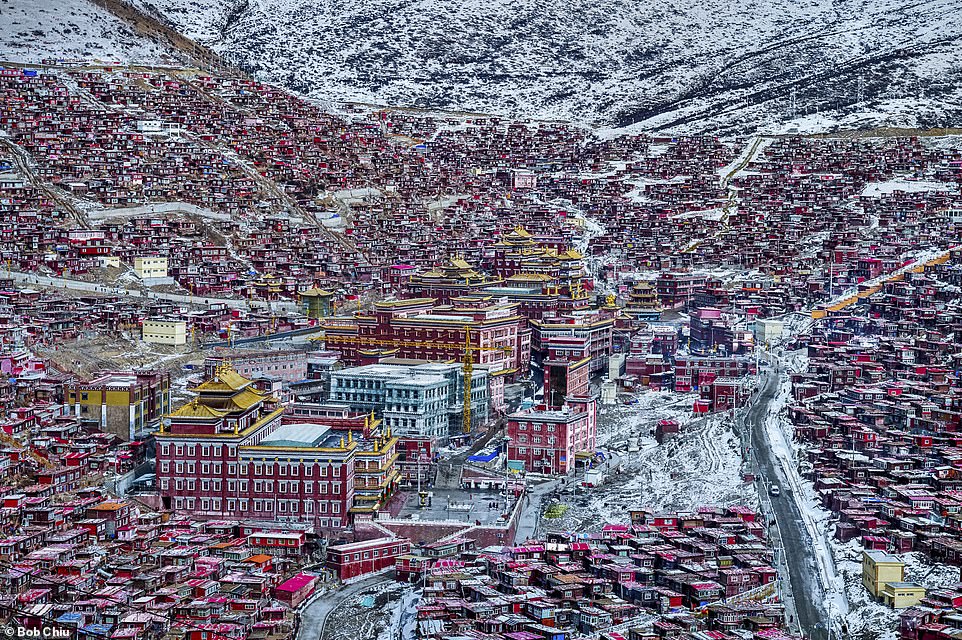 This fascinating image, snapped by photographer Bob Chiu, shows the Larung Gar Buddhist Academy in Sichuan, China. He called the photo ‘The Land of Buddha’ 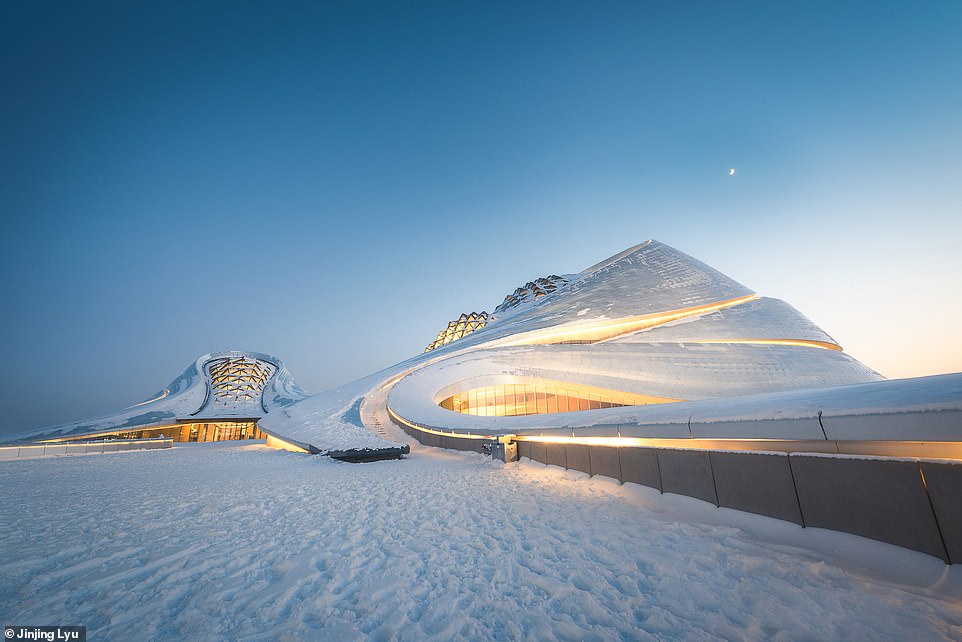 Chinese photographer Jinjing Lyu is behind this mesmerising shot of a snow-covered Harbin Grand Theatre in China’s Heilongjiang Province, taken on the last day of 2019. The image is titled ‘Snake Under The Moonlight’ 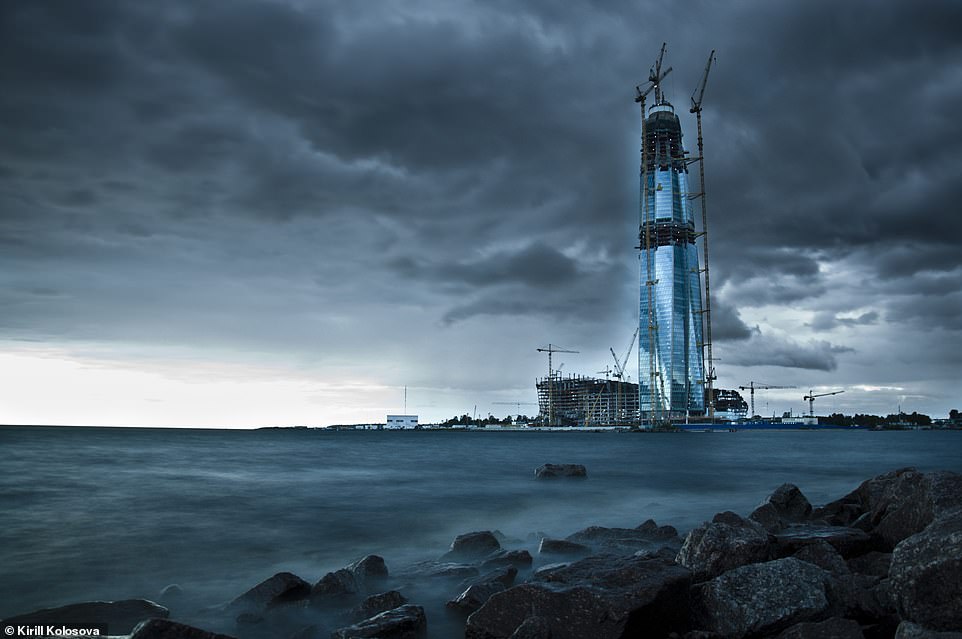 A dramatic image showing the Lakhta Center – Europe’s tallest building at 1,516ft (462m) – under construction in St Petersburg, Russia. The shortlisted photo was taken by Russian photographer Kirill Kolosova, who said: ‘Not even the weather can stop the tallest skyscraper in Europe from being built’ 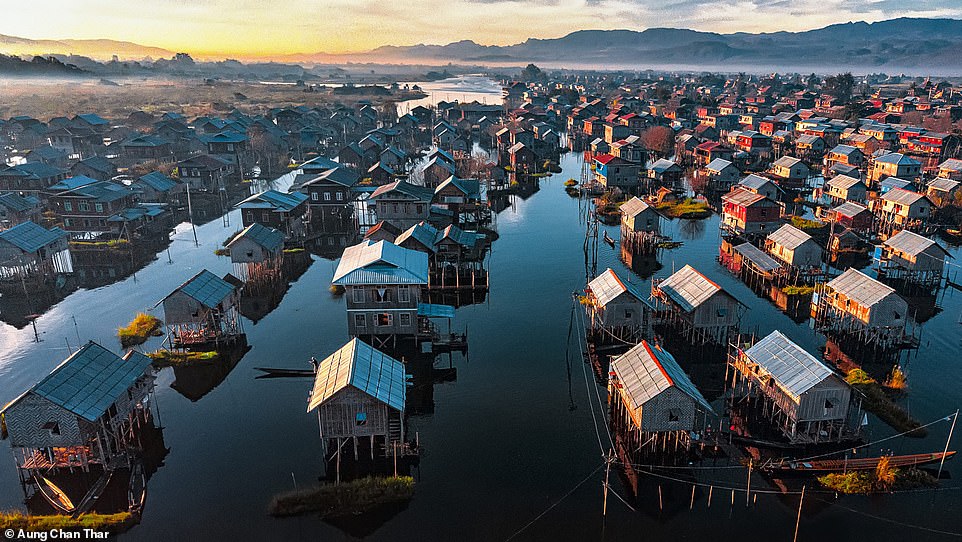 This jaw-dropping image of traditional houses built on Inle Lake in Myanmar was shot by Aung Chan Thar. The photographer said: ‘I have been to Inle Lake many times. It is inhabited by the Shan people, one of the Burmese ethnic groups. They build floating houses on Inle Lake as they search for their livelihoods’

A fascinating image of construction workers next to the De Colonel building – a business centre that at 55m (180ft) is one of the tallest buildings in the Dutch city of Maastricht. It was snapped by Belgian photographer Philippe van Gelooven 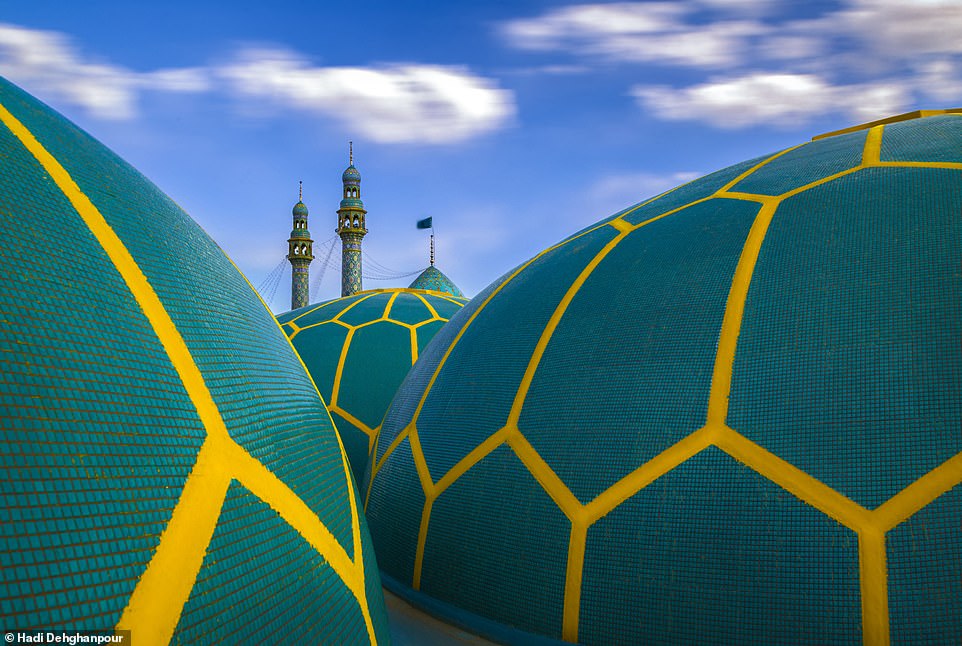 This vibrant image shows the Jamkaran Mosque, close to the Iranian city of Qom. It was snapped by photographer Hadi Dehghanpour 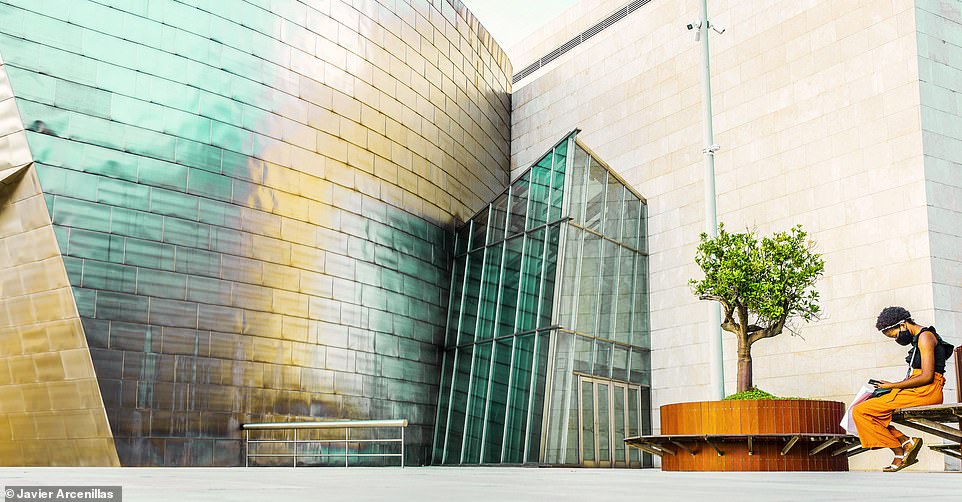 A colourful image of the Guggenheim Museum in the Spanish city of Bilbao taken by Javier Arcenillas. His photo was highly commended by the judges. He said: ‘During the summer of Covid-19, the lack of tourism in the city has transformed the way people understand the building itself’ 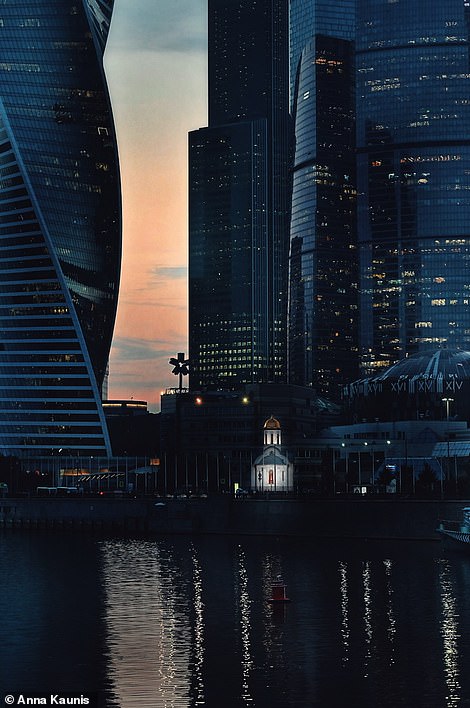 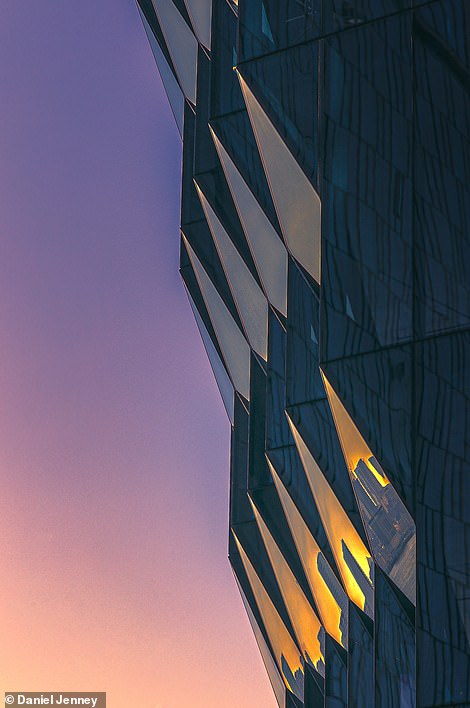 On the left, a beautiful church sits sandwiched between skyscrapers in Moscow in an amazing snap by Russian photographer Anna Kaunis. On the right is a stunning image by American snapper Daniel Jenney, which shows the sunset reflecting off a building on Manhattan’s Lower West Side. He said: ‘Modern, minimalist architecture can really be a great canvas to let light play and change throughout the day. This structure, located on New York’s Lower West Side, reflects the sunset behind the city and provides a great hard and sharp contrast to the pastel sky’ 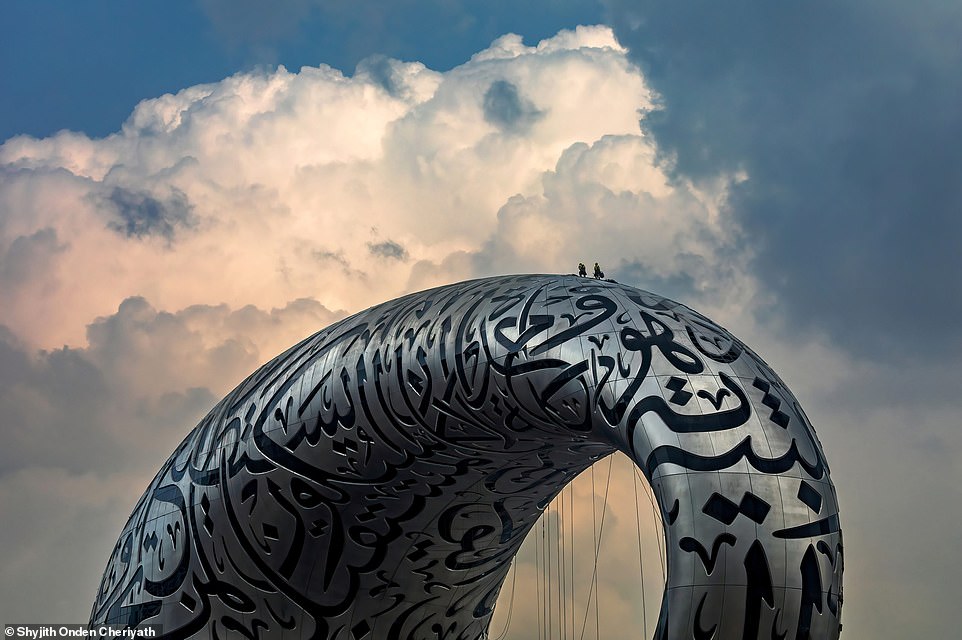 Dubai-based photographer Shyjith Onden Cheriyath snapped this eye-popping picture of the city’s Museum of Future. The photographer added: ‘The Museum of Future is the latest addition to Dubai’s architecture wonders. It is a museum that not only houses innovation and design but is innovative and creative itself’ 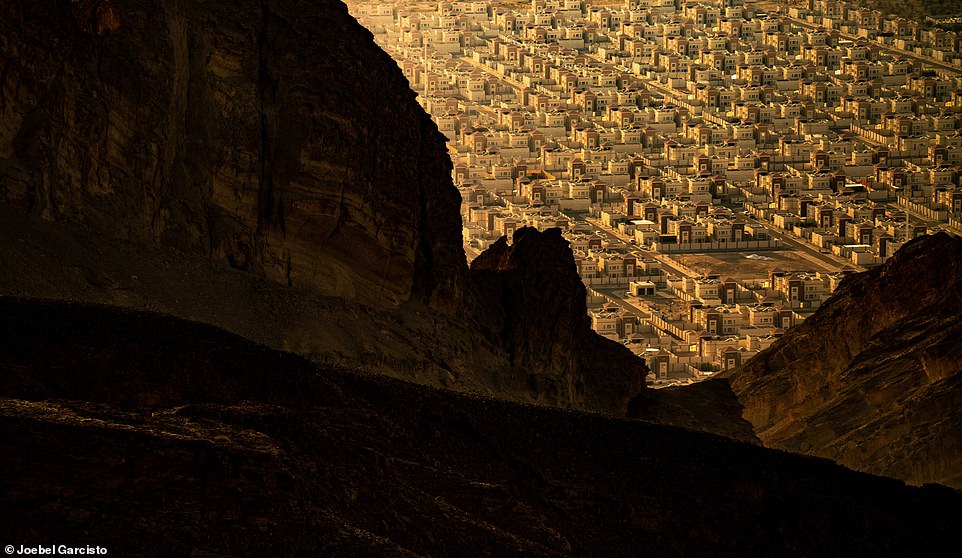 This hypnotic image by Joebel Garcisto, called ‘City In The Desert’, shows Al Ain City in Abu Dhabi. The photographer said: ‘This housing project is built at the bottom of the mountain and is surrounded by the warm colour of the desert’ 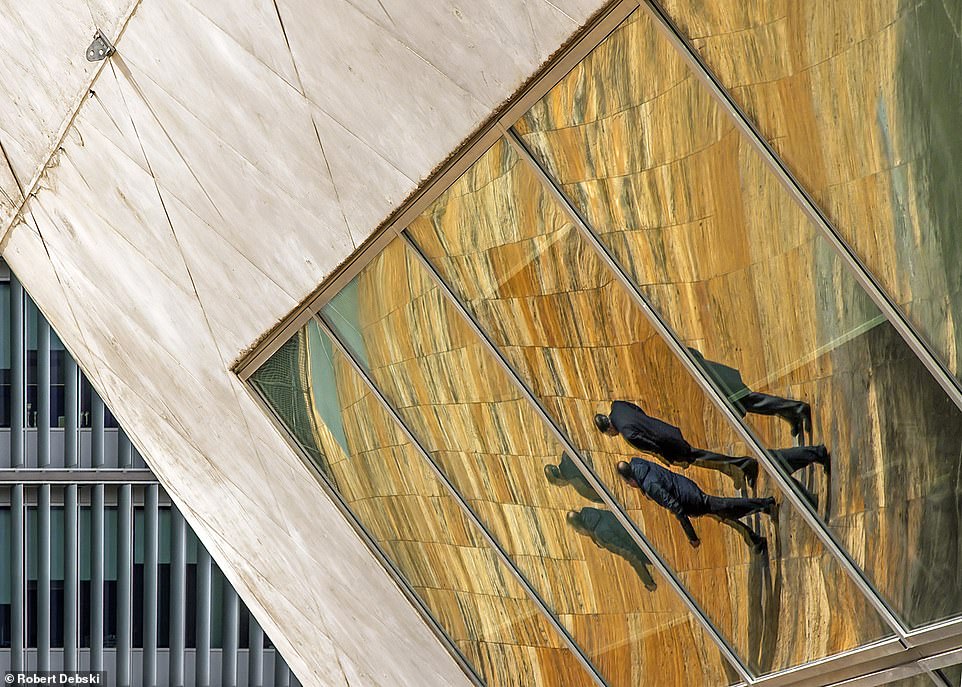 American photographer Robert Debski snapped this unusual image at the Casa da Musica concert hall in the Portuguese city of Porto. He said: ‘Casa da Musica in Porto provides the photographer with many striking viewpoints. However, fortunate timing not only brought movement to this image but also a level of intrigue as one tries to reconcile the perspective’ 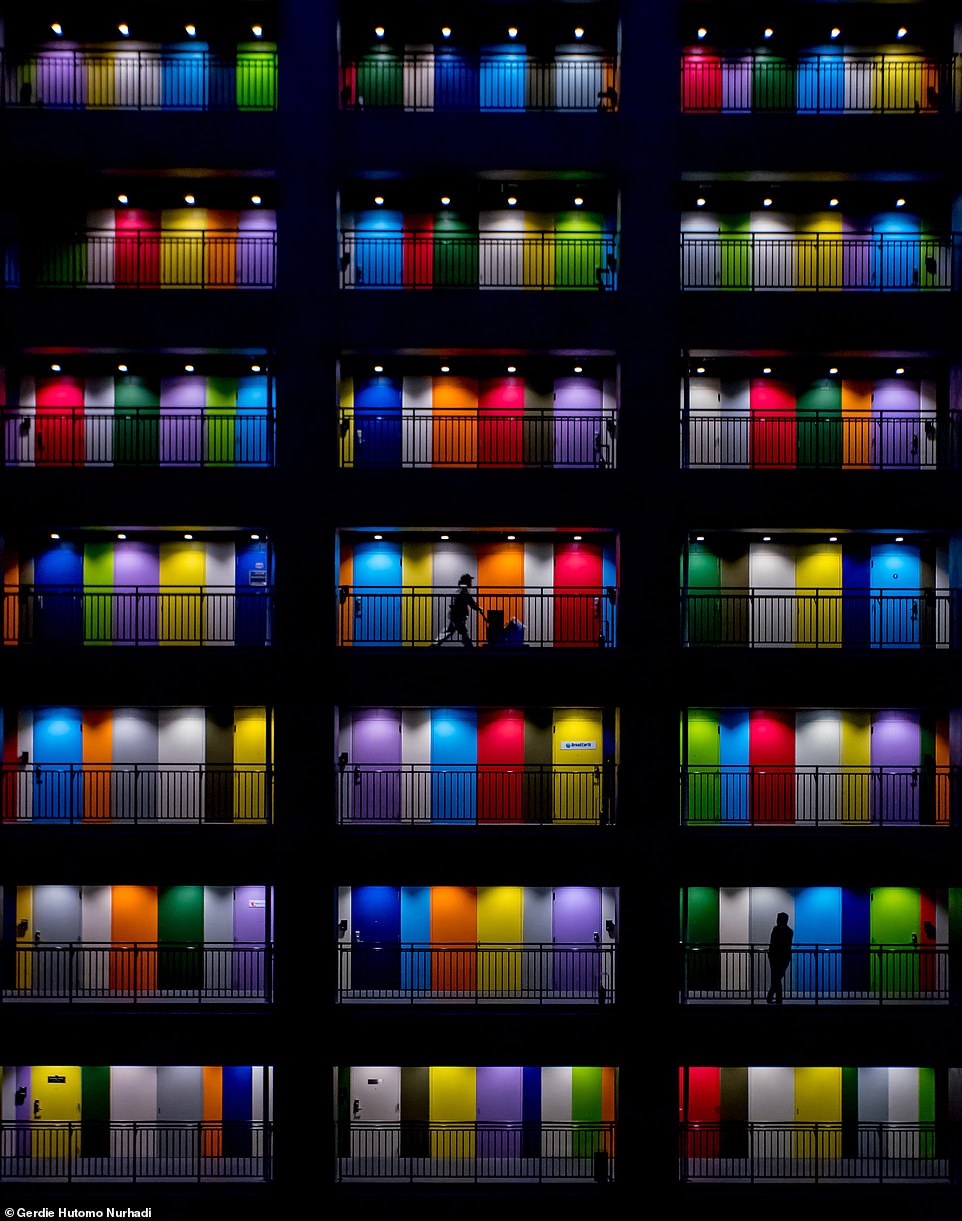 a, images, in, prestigiou, winning
You may also like: