Kinshasa: The Democratic Republic of Congo, a nation of 100 million people, is stepping up its coronavirus inoculation campaign amid concern that populations that aren’t immunised could spawn mutations that evade vaccines and spread more rapidly.

Congo has vaccinated the lowest proportion of its population out of more than 200 countries and regions tracked by Bloomberg, with just 140,000 shots administered as of October 8. The World Health Organisation attributed the slow take-up to hesitancy, which was fuelled by the government’s initial rejection of the AstraZeneca Plc inoculation in July, and apathy by its politicians in advocating for vaccines. 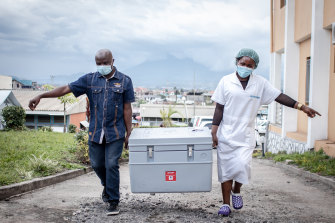 A shipment of COVAX AstraZeneca arrived in the Democratic Republic of Congo in May. The nation delayed its rollout after blood clots were reported in Europe and gave away half a million doses to other countries.Credit:Getty

“The pace at which the DRC is going is really concerning,” Richard Mihigo, program area manager for immunisation and vaccine development at the WHO’s Africa office, said in an interview. The initial rejection of AstraZeneca “definitely affected the confidence in terms of vaccination. There was very little signal shown at the higher level on supporting of vaccinations,” he said.

While the government has increased vaccine imports and senior politicians are now advocating their use, there’s still a mountain to climb. Congo is the size of Western Europe with poor infrastructure, making any inoculation campaign logistically difficult and expensive. And despite its vast mineral riches, the country is deeply impoverished and reliant on foreign aid to fund a large part of its health-care spending.

Congo has set a target of inoculating a quarter of adults by the end of next year and 45 per cent by the end of 2023, according to Aime Cikomola, the deputy head of vaccinations at the health ministry. By comparison, Britain has fully vaccinated 68 per cent of its population and is now rolling out booster shots.

“The biggest challenge is distrust of these vaccinations,” said Jean-Jacques Muyembe, a renowned Ebola virus researcher who is leading Congo’s fight against COVID-19. “People here are having difficulty believing in the existence of the disease.” 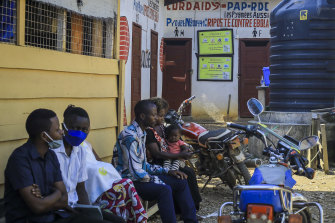 Patients wait to be treated at the Butsili health centre in Beni: the Democratic Republic of Congo is battling both COVID and Ebola this year. Credit:AP

To try and address the problem, the government plans to show President Felix Tshisekedi receiving his second dose on national television. It will also deploy mobile clinics to dispense shots, focusing on the 15 of the country’s 26 provinces that have been hardest hit by the pandemic.

Well-off citizens, who live and work in air-conditioned buildings, bore the initial brunt of the disease, while others who spend more time in the open air were less susceptible, Muyembe said. The average age in the country is 17, which also helped cushion the impact, he said.

Mihigo said the situation has since changed and the official number of 57,269 infections and 1089 related deaths by October 13 is dubious because testing capacity is woefully inadequate. Months of nationwide pay strikes by health-care workers also continue to hamper data collection.

“The reality on the ground is completely different, where we are testing there are cases in the hospital. It’s affected everybody, not only those who are travelling and the rich people,” said Mihigo, who warned that new variants could emerge if the virus continued to circulate unchecked. “Two years down the line we shouldn’t still be speculating about the importance of this disease given the death toll we have seen.”