The International Space Station was briefly tilted out of its normal position in orbit Friday during a test firing of thrusters on one of Russia’s docked spacecraft.

The Russian space agency said in a statement on its website that the crew and station were never in any danger.

But it was the second such emergency on the station since July, when an unexpected firing of thrusters on a new Russian module briefly inverted the outpost. 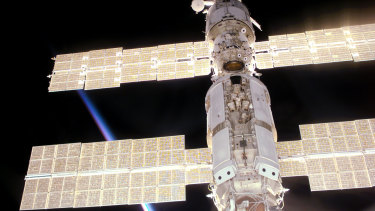 The incident occurred Friday morning as Russian astronaut Oleg Novitsky was performing a test of the engines aboard the Soyuz MS-18 spacecraft, a crew module that has been docked to the station since April. The spacecraft is scheduled to return three passengers to Earth on Sunday.

Russian officials in Moscow and personnel at NASA’s astronaut headquarters in Houston sprang into action during the incident, voicing commands to their astronauts to initiate emergency protocols.

“Oleg, take it easy, the station was turned by 57 degrees, no big deal,” a Russian mission control official in Moscow was quoted as saying to the astronaut by Interfax, a Russian news agency.

“We had to make sure that engines are in order, this is important.”

“Station, Houston space-to-ground two, we see the loss of attitude control warning,” NASA mission control in Houston alerted its astronauts on the station, instructing them to begin emergency procedures in the crew’s “warning book”.

Roscosmos, Russia’s space agency, said in a statement that the space station’s “orientation was temporarily changed” but that its normal position was “swiftly recovered” after Russian specialists in Moscow intervened.

A Roscosmos spokesperson declined to provide additional details of the incident, and NASA did not immediately respond to a request for more information.

“As you can well imagine, when things start going off the rails like that, there’s enough noise on the radar that the clarity of what actually happened is a bit of a mystery,” Timothy Creamer, a NASA flight director who was on duty at the time, told the American astronauts in communications shortly after the thruster firings stopped. He said the Russian thrusters may have stopped firing after they reached a limit, although it was unclear what kind.

Creamer added that “Moscow is checking into it and doing their data analysis”.

On Sunday (Monday AEDT), the same spacecraft that experienced the thruster incident is expected to bring back to Earth a Russian film crew that was flown to the station on a different Soyuz spacecraft on October 5. NASA mission control, heard on a livestream of mission control audio, indicated that the thruster firing incident delayed a planned film shoot in the station’s cupola, a room with six windows facing Earth. The Russian space agency declined to say whether the incident would affect the crew’s scheduled return.

In July, Russia docked its Nauka module to the orbital base, adding a new room for science experiments on the Russian segment of the station. Hours later, Nauka’s thrusters suddenly started firing, spinning the station one and a half revolutions — about 540 degrees — before it came to a stop upside down.

Unexpected jolts to the space station, which is the size of a football field, put stress on the forest of instrumentation on its exterior. After the Nauka incident, Zebulon Scoville, a NASA flight director who managed the agency’s emergency response that day, said on Twitter that he had never “been so happy to see all solar arrays + radiators still attached”.

NASA and Russia have maintained a long relationship on the space station over the past two decades. But in recent years, elements of the station have showed signs of their age, including some air leaks on the Russian side.

NASA wants to continue the partnership with Russia and keep the station operating through 2030, gradually handing off American elements of the laboratory to private US companies. But Russia’s space chief, Dmitry Rogozin, has suggested that Moscow could pull out of the orbital partnership in 2025, one of the latest signals that ties between the two space powers are beginning to fray.

Russia has ramped up its relationship with China’s space program. The two countries signed an agreement in March to work on lunar bases, which would rival the plans of NASA’s Artemis moon exploration program.

China launched the first elements of its own new space station this year and sent its second crew of three astronauts there Friday for a six-month mission. 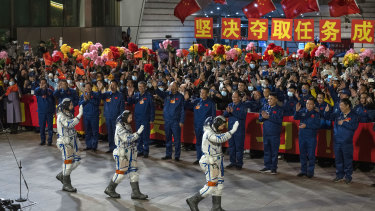 Chinese astronauts wave to wellwishers as they take part in a pre-launch departure ceremony on October 15 at the Jiuquan Satellite Launch Centre in Jiuquan, China. Credit:Getty

China’s Shenzhou-13 spacecraft carrying three Chinese astronauts on Saturday docked at its space station, kicking off a record-setting six-month stay as the country moves toward completing the new orbiting outpost.

The spacecraft was launched by a Long March-2F rocket at 12.23am Saturday and docked with the Tianhe core module of the Tiangong space station at 6.56 am, approximately six and a half hours later.

The two men and one woman are the second crew to move into the space station, which was launched last April. The first crew stayed three months.

The new crew includes two veterans of space travel. Zhai Zhigang, 55, and Wang Yaping, 41, and Ye Guangfu, 41, who is making his first trip to space.

The crew was seen off by a military band and supporters singing “Ode to the Motherland,” underscoring the weight of national pride invested in the China’s space program that has advanced rapidly in recent years.

Easy, It, Oleg, surprise, take
You may also like: