A politicised public service not in Victoria’s interests

This week, Victorian Ombudsman Deborah Glass appointed an experienced investigator of integrity issues to probe claims made in The Age last year that the state’s public service had been politicised by the Andrews government. This is a welcome move.

Glass appointed John McMillan, a former Commonwealth and NSW ombudsman, after parliament’s upper house voted in February to ask the ombudsman to look into the matter. At the heart of the allegations was the concern, as detailed in the Age investigation, that in nearly every department and within key government agencies, political operatives who have dedicated much of their professional lives to advancing the interests of Labor politicians are employed in executive public service positions. 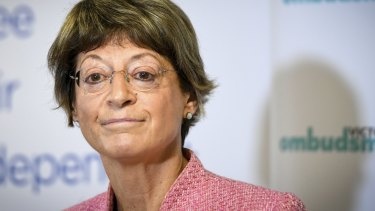 Deborah Glass has appointed a former NSW and Commonwealth ombudsman to investigate whether Victoria’s public service has been politicised.Credit:Penny Stephens

The stories also drew attention to the nearly 90 staff who work in the Premier’s private office, which some believe is the most influential and least transparent organ of the state – unaccountable to parliament and not required to respond to freedom-of-information requests. Bureaucrats and government insiders say the premier’s office has subsumed policy development work previously done by the public service.

And that shift has been reinforced by the Department of Premier and Cabinet, which has nearly tripled in size since the Andrews government came to power. While it is part of the public service, there is growing concern that rather than a bastion of independent advice, it is becoming just an extension of Andrews’ tight control over the rest of the bureaucracy.

As Glass points out in her request for submissions to the investigation, in principle, the Westminster system that our model of government is based on dictates that “the public service must make decisions without regard for political considerations and must provide independent advice to
government in a ‘frank and impartial’ manner”.

But Glass also accepts the reality, as was spelt out in the Age investigation, that it is no longer unusual for public servants to spend time working in ministerial offices and that both sides of politics will replace many senior positions in the bureaucracy after gaining power. Such changes have, of course, blurred the lines between public servants, political staff and elected officials.

In a bid to understand whether that line has not only been crossed in Victoria, but trampled to a degree that has completely stifled the public service from offering independent advice, Glass poses several questions that the probe will focus on, including whether there has been impropriety in the way executive officers have been appointed in Victoria and if the public service has “suffered adversely” or benefitted from people with a political affiliation being appointed to senior positions.

For some, this may seem an esoteric inquiry that has little to do with the real-world concerns of the average Victorian.

But as the probe into the hotel quarantine debacle at the start of the pandemic showed, when the traditional lines of responsibility within the public service are recast by political interference, the consequences can, at worst, be catastrophic.

The good working of any democratic government is often dependent on the rigorous and independent advice of the public service. Without it, policy formulation and implementation can fall back to being determined by a partisan and ideological echo chamber.

Glass has left two months for public submissions by individuals and organisations to assist the inquiry. The Age would strongly encourage people to come forward. The investigation needs to shine a light on what is going on behind the slick public face of this government. The Age believes Victoria will always be a better place for having an independent public service, no matter how much the government of the day may disagree.

Gay Alcorn sends a newsletter to subscribers each week. Sign up to receive her Note from the Editor.