This is the amusing moment a red-faced macaque in a Japanese zoo was left gobsmacked by a magic trick.

Footage shows Kosei, a visitor at the zoo in Kyoto, Japan, using sleight-of-hand to make a piece of fruit disappear in front of the primate’s eyes.

To add weight to the illusion, he first shows the fruit to the animal and teases it with the treat.

The monkey is eyeing the fruit longingly when the tourist suddenly points at it and makes it ‘disappear’.

With its jaw slack and its eyes wide open, the macaque appears totally amazed by the trick.

Kosei said: ‘I fell in love with this monkey. 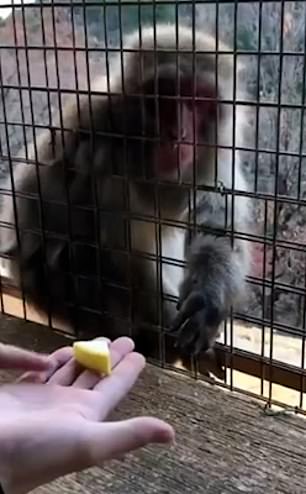 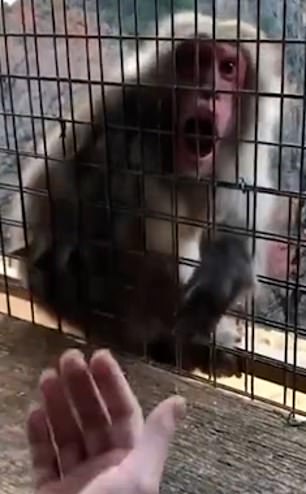 A red-faced macaque at a zoo in Kyoto, Japan, had an adorable reaction when shown a magic trick by a visitor, who tantalised it with a piece of fruit before making it ‘disappear’

‘He was like a child who was happy to see a magic trick. His reaction made me so happy.’

Macaques can also be seen at Japan’s Jigokudani Monkey Park in Yamanouchi.

In the heart-warming footage, an inquisitive baby monkey gets close to one of the tourists and taps their knee, gazing up at them.

The others cleaning each other in the water seem unfazed as swarms of tourists gather round the springs to take pictures and footage of them.

a, amazed, is, macaque, Red-faced
You may also like: