Follow
Home » World News » About 2800 were in hospital at Omicron’s peak. How many caught it there?

About 2800 were in hospital at Omicron’s peak. How many caught it there?

By Mary Ward and Lucy Carroll

Jim Stamell had beaten COVID-19 once. The 71-year-old caught the virus from a fellow patient on his oncology ward at St George Hospital during Sydney’s Delta outbreak.

When he was admitted to Sutherland Hospital in January for a stent blockage, his family breathed a sigh of relief as he was discharged, seemingly dodging another exposure in a shared hospital room while daily cases climbed into the tens of thousands. 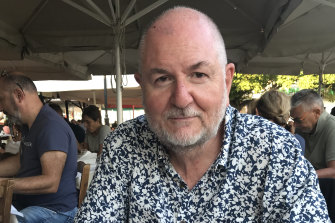 Two days later there was a call from the hospital. A PCR test taken during Stamell’s stay was positive. His condition worsened and he returned to Sutherland.

Stamell died a couple of weeks later, after being transferred to a private rehabilitation unit. It was a quick and unexpected turn of events: doctors said fighting COVID-19 twice had likely weakened his body and his tumour had burst.

Cancer and COVID-19 were registered as his causes of death, an outcome a family member described as “devastating”.

“Had he not had any complications from the cancer he wouldn’t have needed to be in hospital, and he could have been here with us.”

At the peak of the state’s Omicron wave in January, more than 2800 people were in hospital with COVID-19. What is not known is how many people caught it while there.

Professor Brett Mitchell, an infection control researcher at the University of Newcastle, said the lack of data underscores the “massive gap” in the surveillance and public reporting of hospital-acquired infections.

“COVID-19 highlights the need for a robust and transparent surveillance for infections acquired in hospital so we can learn how the infections are transmitted to protect patients and staff,” Mitchell said.

There are about 160,000 infections acquired in Australian hospitals each year, but health departments are only required to publicly report on staphylococcus aureus bloodstream infections (“golden staph”).

Former federal chief medical officer Nick Coatsworth agreed the absence of data is the biggest gap in being able to respond to the problem of hospital acquired infections which are a “huge cause of morbidity, and more importantly mortality.”

“Hospital-acquired infections kill people. We have to do everything we can to stop patients acquiring any infection in hospital,” he said.

By late August, one in five people who died from COVID-19 in Sydney’s Delta wave had caught the virus in hospital.

While details about COVID-19 outbreaks in hospitals were provided until late last year, NSW Health stopped releasing this information as Omicron surged.

NSW Chief Health Officer Kerry Chant said this was because it was “difficult to know” where a patient had been exposed to COVID-19, noting the highly contagious virus’ 14-day incubation period and hospitals reopening to visitors.

But even during Delta, when hospitals were closed to visitors and the community caseload was lower, the number of people catching COVID-19 on wards was difficult to tally, and, according to Mitchell, likely an underestimate. The federal government publishes a weekly data of cases acquired in aged care homes, but the number of people who catch the virus in hospitals has never been routinely reported.

In September, the Herald submitted an application under NSW freedom of information laws for the number of COVID-19 infections acquired in hospitals during the first 12 weeks of Sydney’s Delta wave, which started in mid-June. This was prompted by reports of 11 outbreaks including one affecting every patient in Nepean Hospital’s mental health unit and another at Liverpool Hospital’s geriatric unit which left 12 people dead.

The information, released in late February, revealed there had been 18 hospital outbreaks by September 7, infecting 142 patients, staff and visitors.

(The FOI processing charge of $990 was waived as “an act of good faith” due to the delay.)

Mitchell wants health authorities to mandate the reporting of all respiratory and urinary tract infections, not just “golden staph”, and he and Coatsworth support creating a national body to co-ordinate the surveillance of infections in hospitals and centralise data collection.

Federal Labor has proposed an Australian Centre for Diseases Control, which could in theory perform this role. 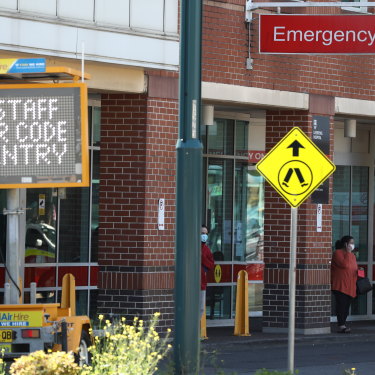 A COVID-19 outbreak at Liverpool Hospital in August resulted in the death of 12 people.Credit:Dominic Lorrimer

The COVID-19 data problem is not exclusive to NSW: no state or territory routinely provides up-to-date information about the number of cases caught in hospital wards. Victoria last reported on the matter in June 2021, finding 11 per cent of hospitalised cases had caught the virus there.

In contrast, UK health agencies reported the country’s Omicron wave brought a surge in hospital-acquired infections. There was about one in four COVID-positive patients in London hospitals in late December.

While no public information is available, NSW hospitals still internally report outbreaks through the same process used for other infectious diseases such as influenza or pertussis.

But staff at three major Sydney hospitals told the Herald there was a tendency to assume COVID-positive patients caught the virus before admission.

When Stamell tested positive for COVID-19 the second time, his infection was not considered to have been acquired at the St George hospital because he was at home for Christmas a fortnight earlier. (None of his family went on to test positive.)

In NSW, a “definite hospital-acquired” infection occurs only if a patient tests positive or develops symptoms more than 14 days into a hospital stay. “Probable hospital-acquired” cases – symptoms on day eight to 14 of their stay with no known exposure prior to hospitalisation, or earlier with a strong suspicion of transmission – are also reportable, and investigated by the NSW Clinical Excellence Commission.

Chant maintained this was a “low threshold” for reporting. “Where it is suspected, people will report it and those things will be looked at,” she said.

Sarah’s husband John* was admitted to Royal Prince Alfred in late December. The doctors diagnosed him with severe liver disease, but he was making good progress with treatment and his condition had stabilised.

The couple’s worst fears were realised in early January, when Sarah received a call that John had caught COVID-19 after staying in a four-bed hospital ward. He died almost three weeks later from his infection. A critical incident review is underway. 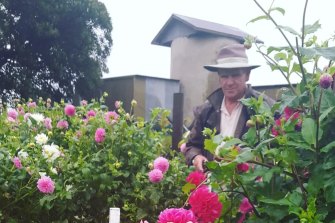 Hank Reeve, 66, died earlier this year. He caught COVID-19 in his ward at Campbelltown Hospital.

Horticulturalist Hank Reeve, 66, caught the virus in Campbelltown Hospital while receiving cancer treatment. His infection delayed his transfer to palliative care, where he died.

Both Reeve and John became eligible for their booster shots while in hospital. Despite their families advocating for them to have the extra vaccine, neither did before they tested positive. Both hospitals said they were unable to administer boosters to in-patients, a policy they have reportedly now changed.

In a letter to the hospital after John’s death, seen by the Herald, Sarah said she knew the booster shot would not have guaranteed his survival, but given he caught the virus a fortnight after his shot was due, “it would have at least given him something to fight the COVID with”.

Associate Professor Sanjaya Senanayake, an infectious diseases physician at Canberra Hospital said people who catch a respiratory infection in a hospital “are more vulnerable and the risk of a stormier course is there”.

A study of Canberra Hospital’s influenza patients in 2017, on which Senanayake was a co-author, found about one in 10 acquired their infection in the hospital. The patients who caught the flu in hospital had higher rates of diabetes and cancer, however they were more likely to receive treatment for flu within 48 hours of symptoms.

Whether COVID-19 impacts a patient’s treatment for other conditions varies. As for the virus, Senanayake said already being in hospital may lead to better outcomes.

“If being in hospital means their infection is identified early they may be a candidate for an intervention like [antiviral therapy] Paxlovid,” Senanayake said.

When Stamell caught COVID-19 at St George hospital, he was removed from a trial of a chemotherapy drug. For the four long weeks until he returned a negative test, he couldn’t receive much of his treatment.

“We didn’t go out because we knew how bad it could be if he got COVID-19. Everyone tried so hard to keep him safe,” a family member said.

“So many of our hospitals have two- and four-bedded rooms. Are we greatly shocked that people get infected in shared rooms? We worry about people catching COVID-19 in the same house,” Collignon said.

In the Canberra Hospital study, about one in four patients who caught flu in a hospital were in a shared room during their incubation period.

Collignon believes, in order to manage this and future pandemics, hospitals need to be designed with 80 per cent single-bed accommodation.

Chant said the pandemic will “change the way we design health systems”.

“That will protect against transmission of a range of viruses: flu and other things,” she said.

Chant said NSW Health had “learnt a lot from the tragic outbreaks we’ve had” which had led to updates to hospital policies, for screening, ventilation and social distancing.

With NSW still recording upwards of 10,000 COVID-19 cases each day health staff, not authorised to speak publicly, have told the Herald about recent outbreaks in hospitals across the state.

“This is going to be an issue we are going to have to grapple with; an additional challenge for our system,” Chant said.

“Are we greatly shocked that people get infected in shared rooms? We worry about people catching COVID in the same house.”

Abiding by mask rules and not visiting hospital if you have symptoms will be important over the winter period, she added.

Meanwhile two months after his death, Stamell’s family is still processing the loss of the “most gentle and loving man and father”. After dedicating his life to teaching he had plans to travel the world with his wife of 41 years once his chemotherapy trial ended.

“He was really, really passionate about the public education system and the public healthcare system,” a family member said.

“He was a huge believer in NSW having public facilities and things like that … I guess he never expected them to fail him.”

*Names have been changed