Prime Minister Scott Morrison has branded Anthony Albanese a “loose unit” over his call to increase wages to match inflation, as Australians struggle with the rising cost of living and price spikes.

The attack was over Albanese’s economic credibility after the Opposition Leader vocally backed a minimum wage increase to match the 5.1 per cent inflation rate, inciting a political storm in the final fortnight of the election campaign. 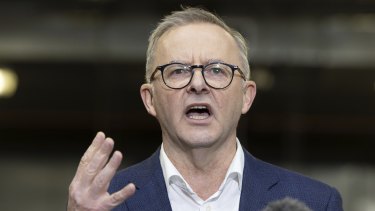 Anthony Albanese has been described as a “loose unit” by his political opponent.Credit:Alex Ellinghausen

“What we saw from Anthony Albanese yesterday was reckless, was incredibly reckless,” Morrison told a press conference in Newcastle, north of Sydney, on Wednesday morning.

The Coalition attacked Labor over Albanese’s stance, with various figures saying he was guilty of a “thought bubble” that would spur further inflationary pressures if realised.

Albanese fired back this morning, telling a press conference he was talking about the lowest-paid workers in Australia, “those people who are struggling with the cost of living increase.”

“This prime minister is loose with the truth,” Albanese said in response.

The Fair Work Commission is taking submissions on the minimum wage ahead of a decision expected in June, and its outcome will determine rates affecting about two million Australians who are paid the current minimum of $20.33 per hour or whose incomes are linked by a higher industry award.

Those comments appear to run in contrast with Morrison’s repeated commentary about the independence of the Fair Work Commission, the industrial umpire that decides the national minimum wage, a topic that has now become a central component of the election.

Former Macquarie Dictionary editor Sue Butler, an expert in the Australian lexicon, said the term “loose unit” was usually ascribed to someone who was eccentric and unconventional, as well as someone who enjoyed going out on the town “and getting plastered”.

“I think it has the same sense as loose cannon, someone you can’t trust,” Butler, now an independent lexicographer, said.

“Most people would use ‘loose unit’ with, I think a tinge of admiration … his use of it as a derogatory term is, perhaps, unusual.”

Burke told the ABC’s RN Breakfast that Labor will have more to say about its position on wages growth soon, but wouldn’t be drawn on whether that will include an exact figure.

“What we’ve made clear is that we can’t go back on wages,” the Labor frontbencher said. “We’ve been talking about this for a long time and we’ve been making the same point publicly for a long time.”

He said the Labor leader was asked yesterday about his support for wages keeping up with inflation, and so “Anthony gave the completely consistent answer”.