‘Every morning I tell my children they have a wonderful opportunity in the UK’: Afghan translators tell of their joy at being given haven in Britain… but why are so many still being kept in hotels?

Looking out to sea from a sandy Welsh beach while his children practise their new-found rugby skills, Latif Hottak struggles to come to terms with his family’s luck.

It is a year since the 38-year-old former British military interpreter and his family fled Kabul on an RAF flight that for years seemed ‘an impossible dream’.

‘Those who escaped Afghanistan are truly the lucky ones,’ he said. ‘I know that my family has been given the gift of a new future and every morning I tell my children they have a wonderful opportunity here in the UK and not to waste it.

‘The Taliban hunted me, tried to kill me, and I really thought I would be left behind – but thanks to the British Government and most especially you [the Daily Mail] I escaped.’

Latif’s was one of hundreds of cases taken up by this newspaper’s award-winning Betrayal of the Brave campaign, which for seven years has fought for Afghans who stood shoulder to shoulder with UK forces – becoming Taliban targets – and who feared being ‘abandoned’ by Britain. 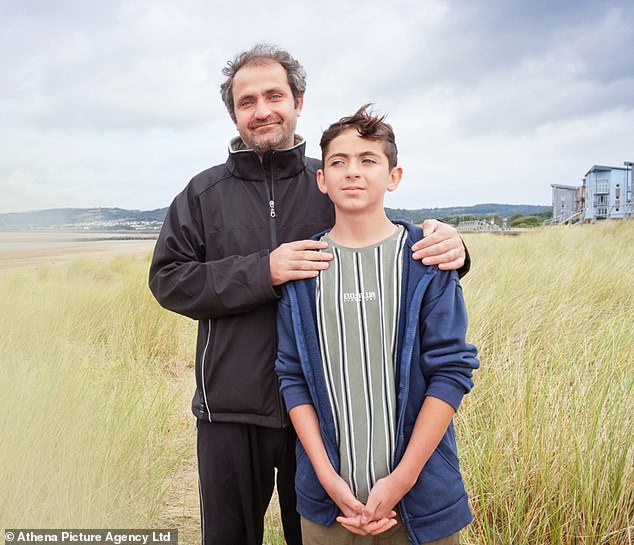 It is a year since Latif Hottak (pictured), a 38-year-old former British military interpreter, and his family fled Kabul on an RAF flight that for years seemed ‘an impossible dream’.

Last August, as they hid from the Taliban in a Kabul basement, the family were told they were not entitled to sanctuary.

Latif had worked for the UK for six years, three on the frontline, but claimed to have resigned. The Ministry of Defence insisted he had been dismissed in January 2011. Salary records handed to the MoD by the Mail meant that within days, he was offered sanctuary.

The family – with wife Ruqia, 36, and children Zaki, 14, Sana 12, Sama, 11, and Sudies, eight – live in a four-bedroomed house in Llanelli, near Swansea. Ruqia was once a midwife – when her English has improved, she will train to assist births here. Latif has just landed a job in human resources with the council.

Despite speaking good English and several other languages, many interpreters say they have struggled to find full-time work. Others have jobs varying from translating to security, delivery driving and meat processing.

Former translator Hashmat Nawabi, 38, is flourishing – alongside his wife Sagofa, 35, and sons Zahid, three, and one-year-old Buhran. They are building new lives from their tenth-floor flat in Glasgow.

Known as ‘Hash’, he worked for UK troops as a translator and cultural adviser between 2007 and 2012, but was told he did not qualify for sanctuary. Thanks to the Mail’s campaign, he and his family arrived on the first mercy flight last June. 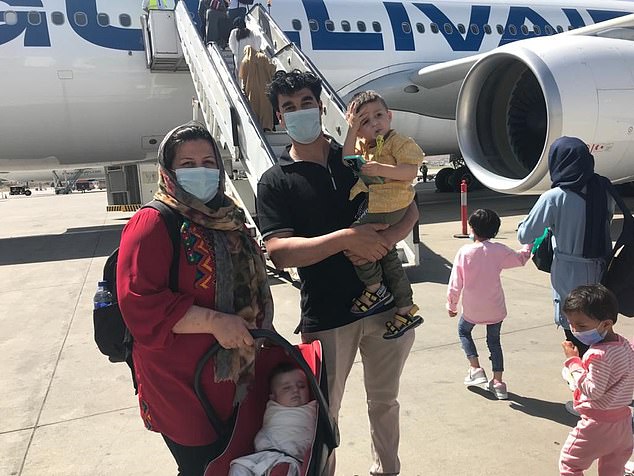 Former translator Hashmat Nawabi, 38, is flourishing – alongside his wife Sagofa, 35, and sons Zahid, three, and one-year-old Buhran (the family is pictured boarding a British government chartered plane bringing them to the UK). They are building new lives from their tenth-floor flat in Glasgow

‘I will never forget the gift of a new life and future you have helped to give us and you will always be in our hearts,’ said Hash. He now wants to go into nursing, and Sagofa is studying specialist childcare.

They are among the lucky 7,000-plus evacuated Afghans given permanent homes – a ‘lottery’. Well over half of those rescued are still waiting after a year in ‘bridging hotels’.

There are still more than 9,000 Afghans in hotels 12 months after arriving, costing taxpayers around £1.2million a day. For some, this has become a nightmare. There have been at least two reported suicide attempts and cases of deep depression, as well as reports of widespread domestic abuse (unrelated to the Afghan translators).

Among those alongside the translators in the hotels are thousands of families of British citizens rescued in Operation Pitting and Afghan intelligence and special forces members.

One woman in a Birmingham hotel said her husband locked her in her room while he went out, making her tell officials that she did not want to learn English or leave the home.

Another said her violent husband had cut her off from the outside world. Victims said they dare not ask for help for fear of their husbands hurting their family back in Afghanistan.

When Jahan was evacuated, she said it felt like ‘paradise’. But being stuck in a tiny hotel room for most of a year has verged on purgatory.

‘We don’t know from one day to the next what will happen to us. We can’t look for jobs or plan for the future because we don’t know if we’ll suddenly be moved to another town,’ said Jahan, 47, a former manager.

She sees a bright future for her three children, but adds: ‘With all this money [being spent on hotels] they could have bought houses for us to rent – or even built them.’

Former translator Bahawar Mayar, 52, who has spent a year in a London hotel with his family of six, said: ‘We will be forever grateful to the UK for saving us but our lives are on hold and I would ask that this homes issue is resolved urgently so we can make our fresh start.’