As the outgoing PM started his speech at 7.30am, Bye Bye Boris – a parody of The Four Seasons’ Bye Bye Baby famously covered by the Bay City Rollers, began playing over a speaker from Kings Charles Street, which runs parallel to Downing Street.

The song, which rewrites the chorus to ‘Bye bye Boris, Boris goodbye’, was played so loudly it was picked on television microphones.

As Mr Johnson’s farewell drew to its conclusion, the Benny Hill theme can be heard over him thanking staff, family and his dog Dilyn. 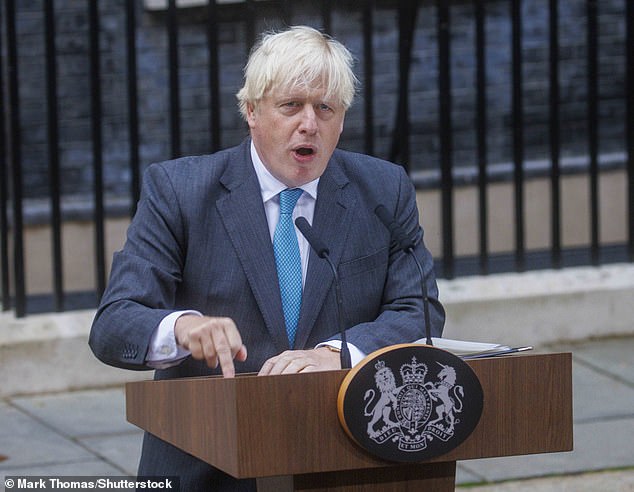 Boris Johnson (pictured) was greeted to applause outside No 10 saying as he began his speech saying: ‘Well, this is it folks’ 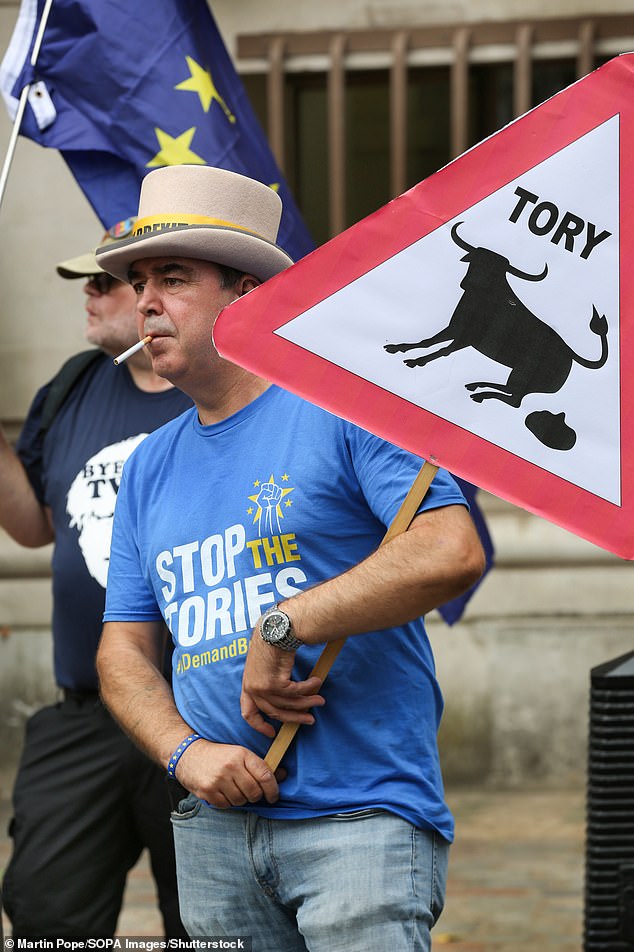 The Benny Hill is a comedy show from the 50s known for its faces and slapstick humour.

Shouting from activists can also be heard as he gave his speech.

Boris Johnson was greeted to applause outside No 10 saying as he began his speech saying: ‘Well, this is it folks.

‘In only a couple of hours I will be in Balmoral to see Her Majesty the Queen and the torch will finally be passed to a new Conservative leader.

‘The baton will be handed over in what has unexpectedly turned out to be a relay race – they changed the rules halfway through but never mind that.

Gesturing to the front door of No 10 he said: ‘Through that lacquered black door a new Prime Minister will shortly go to meet a fantastic group of public servants.’

The song can then be heard over the speech as he thanked ‘the people who ‘got Brexit done’ and ‘delivered the fastest vaccine rollout in Europe’.

At 8.10am, Mr Bray tweeted he and campaigners went to the Foreign Office to ‘blast through the arches’.

They then came opposite Downing Street as Mr Johnson left after his speech.

The video shows a Met Police officer cross the road, try to talk to Mr Bray over the music and then try and unplug leads from the amp.

Mr Bray quickly grabbed the amp to stop the officer and loudly repeated ‘leave my equipment alone’ to the officer.

The two then talk over the music, but it cannot be clearly heard what they are saying due to the high volume. The officer then leaves Mr Bray with his music still blaring.

Mr Bray then starts the scream into a loudhailer.

Twitter user, ‘NEP’, posted a video of himself heckling Mr Bray walking down the street with his amp on wheels.

The man said: ‘Alright Steve, how you doing?

‘I got up early this morning to come and disrupt you and your speaker – what did you do, why weren’t you there? I thought you were an activist.’

‘I don’t care what you do,’ Mr Bray replied.

The man then said: ‘You’re letting down all these people that have given you all this money.’

A police officer then interjected suggesting that the pair ‘leave each other alone’.

In his speech, Mr Johnson added: ‘I will be offering this government nothing but the most fervent support,’ he said. ‘We will get through it, we will come out stronger the other side… it is time for us all to get behind Liz Truss.’

Amid warm applause, Mr Johnson shook hands with some of the crowd – which included current and former Cabinet ministers, as well as Jacob Rees-Mogg with one of his sons – before getting into a government car with Carrie and their two children.

Mr Johnson was forced to bring forward his address due to bad weather expected to affect his flight to see the Queen in Scotland.

He is due to see the monarch, 96, at Balmoral in the Cairngorms at 11.20am – and Royal aides are famously sticklers for timings.

Mr Johnson will be followed swiftly into the royal residence by Liz Truss, who will officially be asked to form a Government as prime minister.