THIS is the shocking moment two men were filmed throwing punches at each other on a Japanese plane – ending in the arrest of a "boozed-up" American traveller.

Footage posted on Twitter by a fellow flyer shows flight attendants desperately trying to break up the brawling pair in front of horrified passengers. 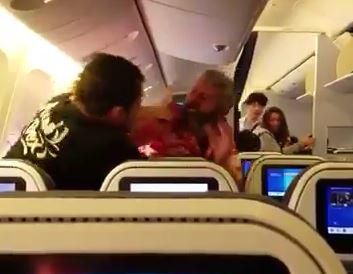 One passenger can be heard yelling: "Someone help! This guy is crazy."

Others can be heard begging the men to stop as a baby screams in the background.

The red-shirted man is then escorted away by staff as the man in black looks on yelling: "Get this guy off this plane."

But moments later, with his shirt ripped, the man in red returns to continue his feud with the same guy. 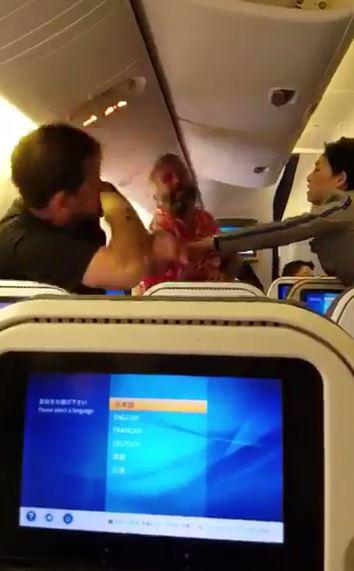 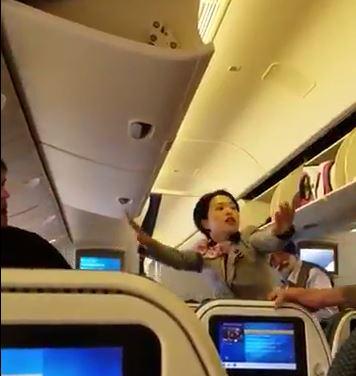 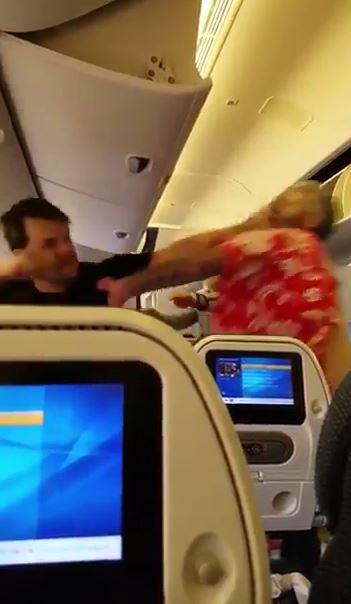 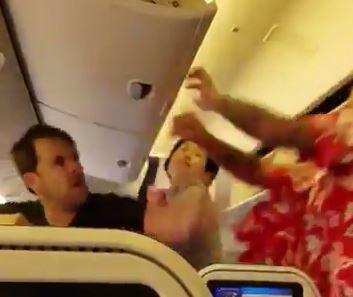 It seems the comments provoked him to return as the pair trade more wild blows.

It is unclear why the punch-up took place.

The fight happened at Tokyo’s Narita Airport just before 6pm on Monday on Flight NH6, which was about to depart for Los Angeles, New York Post reported.

The passenger who posted the video @CoreyHour tweeted: “So, ten minutes before take-off a passenger starts a huge fight in his row. I get in between him and flight attendants, but he won’t 1v1 me.

"He yells, ‘You think I’m crazy? What about the government!’ Then exits the plane. 1.5 hours later and we finally take off.

"The video ended when I stepped in & confronted the man in the red shirt. I told him to leave and squared up with him, he backed down n left.

"As of now and after speaking with the other passengers the motive for why he did this is still UNKNOWN. None of us have any idea why at all."

The flight had already been delayed due to unstable weather conditions.

@CoreyHour added: “For the record ANA staff and passengers handled the situation with grace and respect. They did the best they could to diffuse the situation."

The American passenger was allegedly drunk and started acting in an unruly manner, Fuji TV reported.

Deeming him a potential safety threat, the airline asked him to disembark before take-off.

But he resisted and hit a female passenger, Japan Today reported.

He was was arrested and charged with assault,

An ANA airline spokesperson told The Sun Online: “All Nippon Airways apologies to our passengers on Flight#6 to Los Angeles for the pre-flight incident.

"The individuals involved have been dealt with appropriately by local law enforcement.”

This latest plane drama comes after a Delta pilot was caught on camera smacking a female passenger in a bid to break up a violent brawl in front of stunned travellers.

Footage posted on YouTube shows the pilot trying to separate two women who got into a fight on an air bridge shortly after the plane landed.

The scrap reportedly happened at Hartsfield-Jackson airport in Atlanta.

In another incident,  a Delta Airline passenger last week was kicked off a flight because he was desperate for the loo after waiting half an hour for take-off.

And earlier this month, 69-year-old Dr David Dao was left battered and bloodied after he was dragged from a United Airlines flight after the airline overbooked seats.

Video of the incident provoked fury across the world and at one point $1billion was wiped off the company’s value.

The doctor later received a financial settlement from United Airlines.

There was more trouble for the airline after The Sun last week reported how three-foot Simon the rabbit appeared happy and healthy when he touched down at Chicago’s O’Hare International Airport but was found dead a short time later.

It emerged the giant pet “froze to death” after he was accidentally left in a freezer for around 16 hours.