Follow
Home » World News » As the Taliban seize control, here’s what Australia can do to help our people

As the Taliban seize control, here’s what Australia can do to help our people

Since the withdrawal of international forces from Afghanistan commenced, every day we woke up to news that the Taliban had taken over yet another district, provincial capital, and swaths of territory in Afghanistan. In the process, the fundamentalist Taliban destroyed homes, displaced thousands of people and have reintroduced draconian laws synonymous with their previous rule. As the Taliban took control, women could not so much as leave their homes without a veil. Now the takeover is complete. 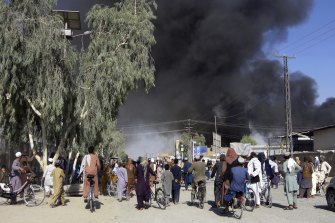 Plumes of smoke rise into the sky after fighting between the Taliban and Afghan security personnel in Kandahar, Afghanistan, southwest of Kabul.Credit:AP

The response from the West, including in Australia, has been little more than to call out breaches of humanitarian law or encourage the Taliban to take steps toward peace. All while the West attempts to absolve itself of responsibility by repeatedly stating it is up to the Afghan people and its leaders to end the conflict in Afghanistan. But it cannot absolve itself following almost two decades of intervention and promises to the Afghan people that included protection for persecuted groups, women, democratic freedoms and rule of law.

Despite the inherent limitations of a middle power, and the Australian government’s insistence that we have done all we can, it still could do more to contribute to alleviating the suffering, and take small steps toward protecting minorities and women most at risk of the Taliban.

Right now, our government could announce and implement a one-off humanitarian intake of most vulnerable Afghans, especially minority groups such as the Hazaras and women and children who have been displaced by the war and are seeking refuge on the streets of Kabul and in neighbouring countries such as Iran and Pakistan.

There is a precedent for Australia increasing our humanitarian intake in time of dire need, the most recent being the 2015 announcement of an additional 12,000 humanitarian visas for people displaced by the crisis in Syria and Iraq.

Canada, another member of the international intervention in Afghanistan, has already announced it will accept 20,000 Afghan refugees. Australia could do the same immediately.

Across Australia there are refugees from Afghanistan, predominantly from the persecuted Hazara ethnic group, who have fled the Taliban. They face an uncertain future because they are on temporary protection visas, despite the Australian government finding they are indeed refugees, and despite having lived here for more than eight years.

Long persecuted, the Hazaras have faced mass killings and genocide through the history of Afghanistan, and during the previous rule of the Taliban. The recent rise of the Taliban resulted in increased attacks on Hazaras, including attacks on a maternity ward of a hospital that killed pregnant mothers and newborn babies, on a school where Hazara students died, and on wedding halls in Kabul.

Australia should grant all Afghan refugees currently on temporary protection visas permanent protection, and allow them to finally restart their lives without the prospect of being returned to Afghanistan. There are precedents. In July last year, in response to the crackdowns on democracy protesters in Hong Kong, the Australian government announced that about 10,000 Hong Kong students in Australia would be eligible to extend their stay and would have a pathway to stay safely and permanently in Australia. In 1989, in response to the Tiananmen Square massacre in Beijing, then prime minister Bob Hawke offered asylum to 42,000 Chinese nationals in Australia.

Providing safe haven to Afghans is also consistent with our promise to protect persecuted groups when we first entered the war in Afghanistan, and in line with our international obligations.

There are also thousands of Afghan refugees on permanent protection visas, who arrived in Australia before the re-introduction of temporary protection visas, who are prevented from reuniting with their families due to a government ministerial directive that requires the Department of Home Affairs to give the lowest priority to family reunion applications made by those who arrived in Australia by boat. The effect of this ministerial directive is that Afghan refugees who now have family members in such dangerous locations as Ghazni province, where the capital was recently overrun by the Taliban, are denied the right to reunite with their family in safety in Australia.

We are aware of members of the Hazara community in Australia who have lost loved ones while waiting for their family reunion application to be processed. This directive could be terminated right now at the will of the Minister for Home Affairs.

The Australian government continues to block resettlement of refugees to Australia through the UNHCR if they registered in Indonesia after June 2014. This ban was announced by our current Prime Minister six years ago, when he was immigration minister. It continues to reduce resettlement options for refugees, including about 10,000 Afghan refugees awaiting resettlement from Indonesia.

Australia could offer a one-off humanitarian intake from Afghanistan. It could provide permanent protection to all Afghans already in our communities. It could lift the effective ban on family reunion and the ban on resettlement of refugees in Indonesia. Australia could, today, be the lifeline that it promised to be 20 years ago.

Arif Hussein is a human rights lawyer with the Refugee Advice and Casework Service in Sydney. Zaki Haidari is a refugee from Afghanistan, and a leadership co-ordinator at the Jesuit Refugee Service.

as, control, seize, Taliban, the
You may also like: